Op-ed: I once was endorsed to be the Daily Bruin’s editor in chief. I agree with staffers’ concerns.

For the past eight years, I have worked in big newsrooms like the Los Angeles Times and The New York Times, and have learned a thing or two about office politics.

Wow,” stammered the child, as he peered up through his thick tortoise-shell glasses. 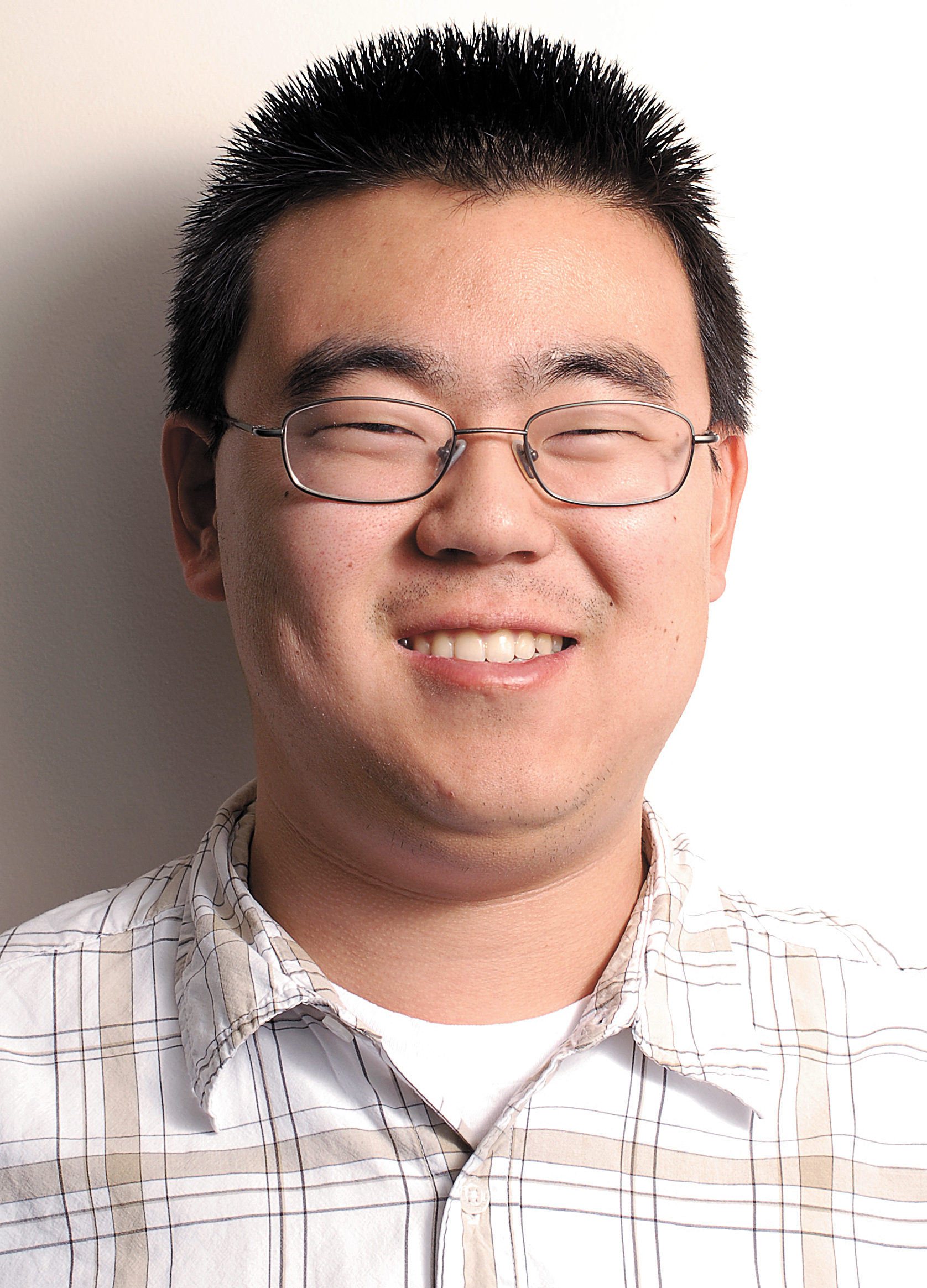 Malcolm Lee will hire an agent and enter the NBA draft, ending his UCLA career after three seasons

Malcolm Lee has withdrawn from UCLA and will hire an agent as he prepares to enter the NBA draft, coach Ben Howland announced Tuesday. 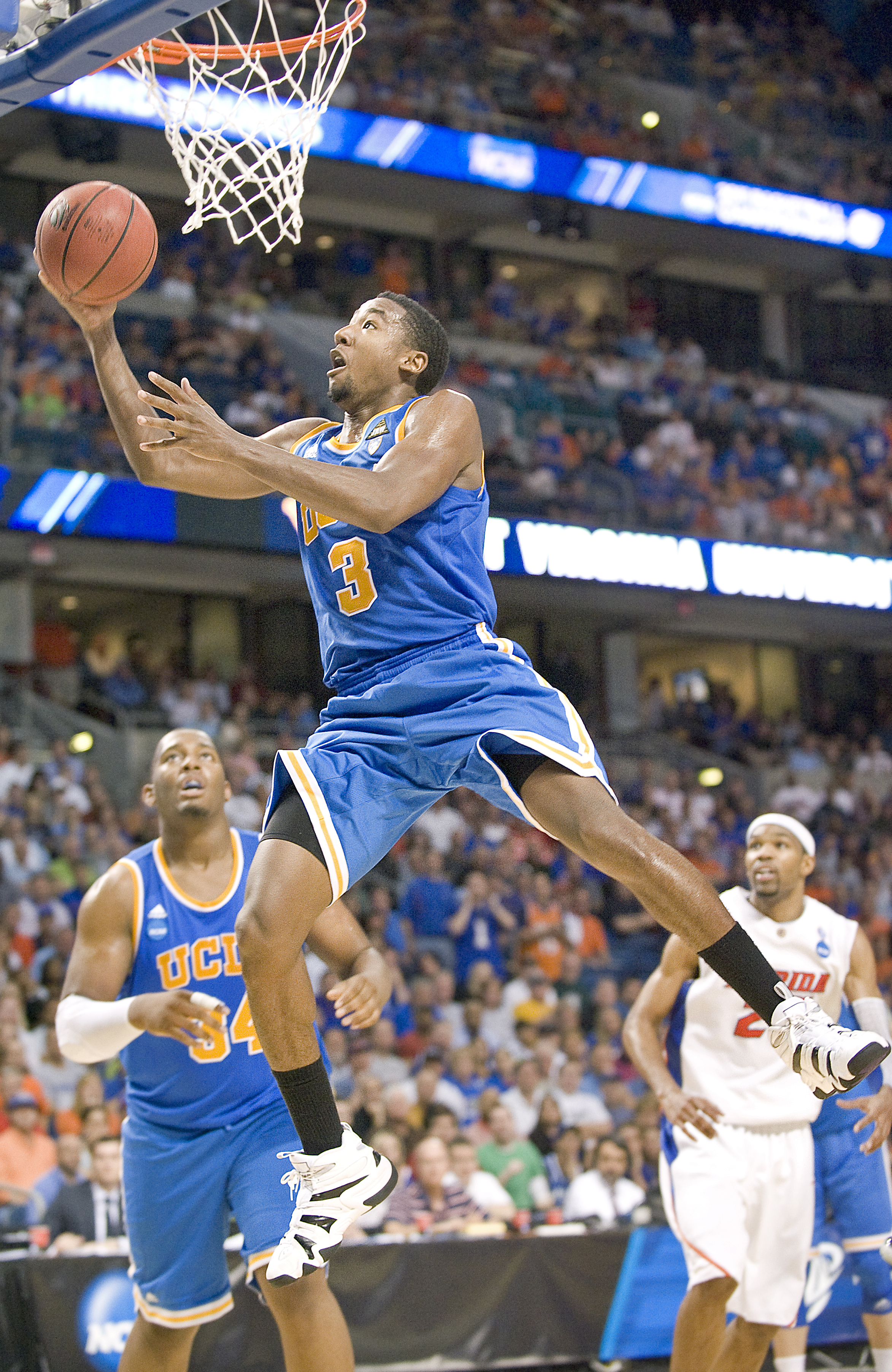 And when coach Ben Howland was asked about next year’s prospects, he took a sip of his water before answering with a smirk.

“I think we could be pretty good,” he said.

TAMPA, Fla. “”mdash; UCLA starters Joshua Smith, Lazeric Jones and Malcolm Lee speak to reporters in the locker room of St. Pete Times Forum after the No. 7-seeded Bruins’ 73-65 loss to No. 2-seed Florida in the third round of the 2011 NCAA Tournament.

Smith had one of the finest games of his career with 16 points on seven-of-11 shooting, but it came in UCLA’s final game of the year, a fact that couldn’t prevent the freshman center – who Florida coach Billy Donovan called a “freight train” – from letting his eyes get red afterward.

Jones struggled with foul trouble throughout the game before fouling out with less than a minute to play. The junior guard finished with four points and five assists in 17 minutes on the floor, but committed a costly turnover with 3:07 to play and the Bruins down four points.

Lee had 14 points and six rebounds and once again led the way defensively by keeping Florida guards Kenny Boynton and Erving Walker in check early. But even the UCLA junior guard couldn’t stop Walker from going on a late barrage – the 5-foot-8-inch Walker scored 10 out of the Gators’ last 12 points to close out the game, including a deep 3-pointer he scored immediately after fighting for an airborne loose ball with Lee.

By Eli Smukler and Matt Stevens

TAMPA, Fla. “”mdash; Sitting in his cramped locker, reporters long having left him alone, a sulking Malcolm Lee took his frustration out on his sock. 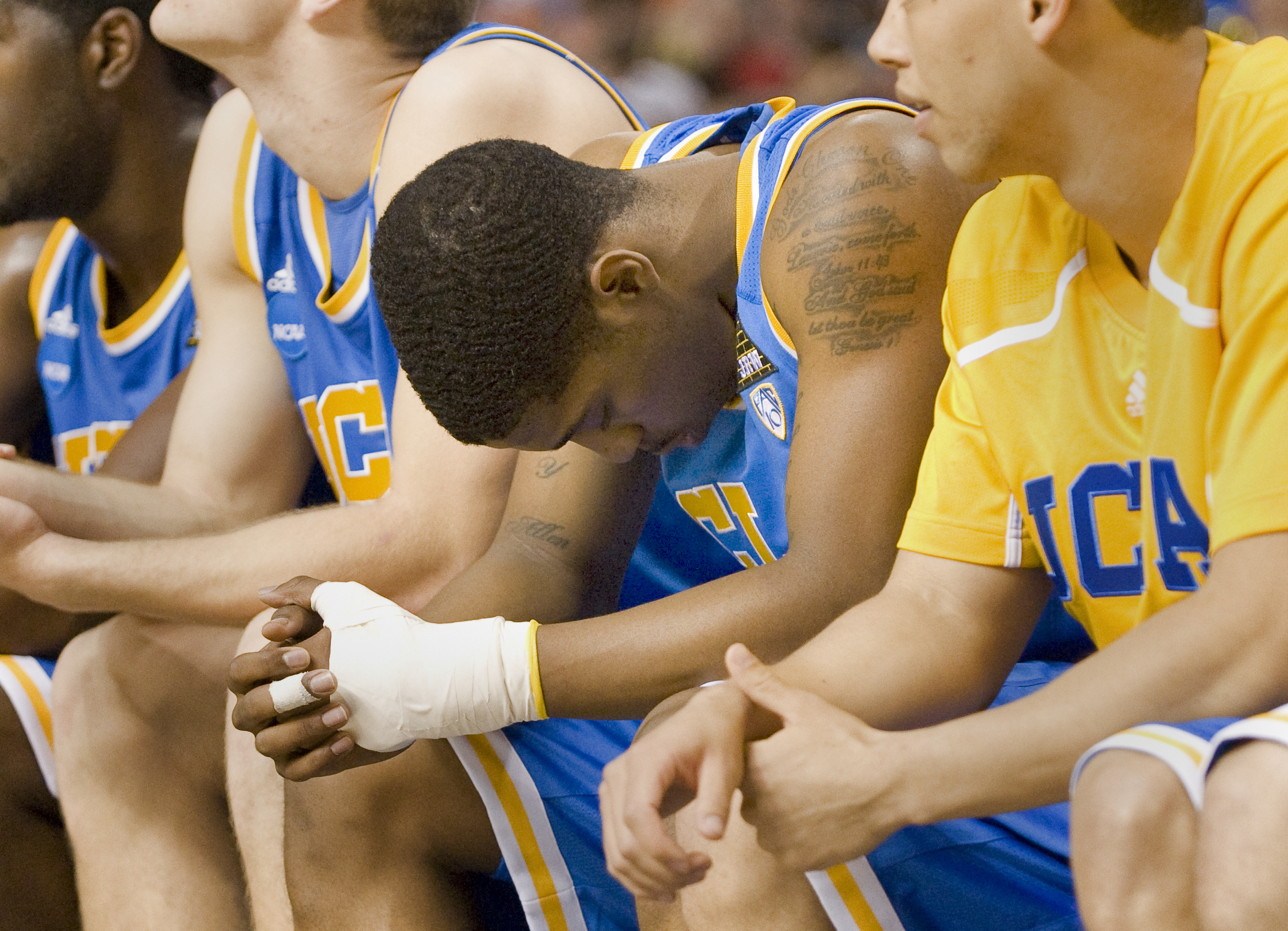 TAMPA, Fla. “”mdash; In one of the most evenly matched games in the NCAA Tournament, No. 7-seed UCLA fell to No. 2-seed Florida, 73-65, ending the Bruins season after one of their best-played games of the year.

Until the last minutes, no team led by more than six, but the Bruins couldn’t close the gap and trailed for the majority of the game.

Four Bruins scored in double digits but it wasn’t enough to upset the Gators, who seemed to have answer every UCLA run with a 3-pointer.

Florida’s Erving Walker led the Gators with 21 points and combined with Kenny Boynton to hit critical free throws down the stretch.

The Gators had four players with four fouls by the time the buzzer sounded, but none fouled out. 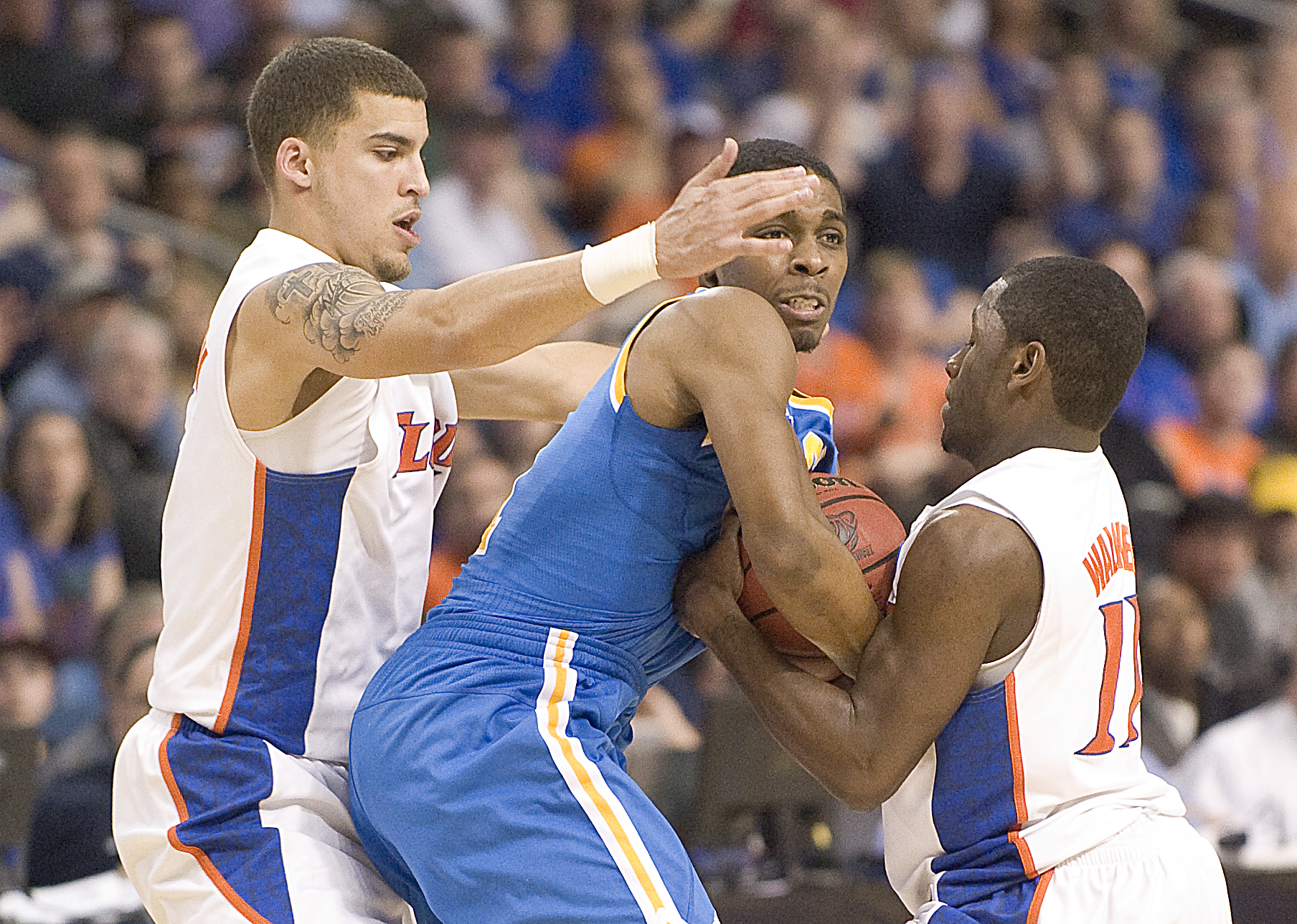 UCLA down two at the half

TAMPA, Fla. ““- The Bruins had two chances to go into the locker room with a tie or the lead, but instead enter halftime trailing Florida, 35-33.

The Bruins pulled down two offensive rebounds, and freshman center Anthony Stover missed three free throws to end the half, prompting sophomore guard Tyler Honeycutt to practice his shooting motion as he walked off the court.

Nonetheless, UCLA enjoyed a four-point lead midway through the second half before Florida’s sharp outside shooting put the Gators ahead.

In this see-saw third-round game, no team has lead by more than four and the lead has changed eight times.

Both teams have a balanced box score, but perhaps the biggest story line is unfolding in the paint. 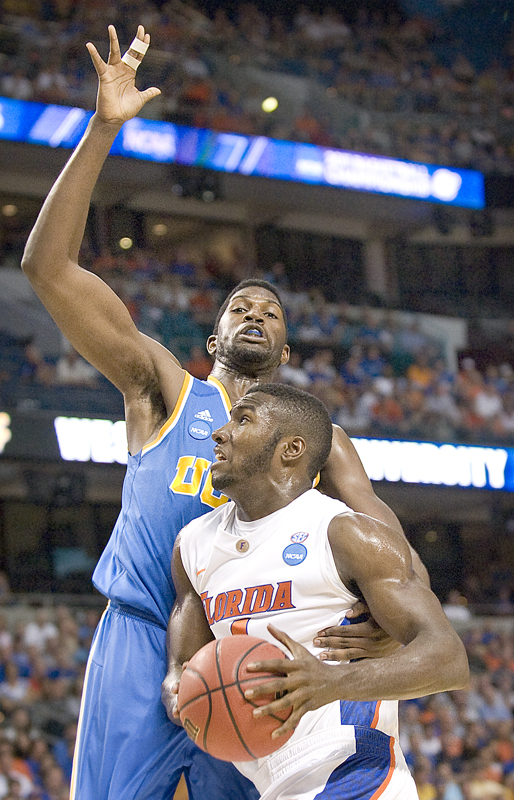 TAMPA, Fla. — In a rematch of last year’s Elite Eight, No. 4-seed Kentucky slipped past No. 5-seed West Virgina to advance to the Sweet 16.

A loud and sizable pro-Kentucky crowd helped urge John Calipari’s team to the 71-63 win that was sealed when West Virgina’s Jonnie West air-balled a 3-pointer from the baseline with 40 seconds to go.

The Wildcats got a big game from both pf their freshman standouts, especially Brandon Knight. The guard playing in his home state poured in 30 points to lead Kentucky, while his backcourt partner Terrence Jones posted a double-double with 12 points and 10 rebounds.

Kentucky will face the winner of the Ohio State-George Mason contest to be played tomorrow.

WVU leads Kentucky at the half

TAMPA, Fla. — In the first of two games of the Tampa subregional, West Virgina finished the half on an 8-0 run in the last 1:10 to take a 41-33 lead into the locker room.

Despite shooting 56.5 percent and getting 16 points from freshman guard Brandon Knight, “Big Blue” fans — which traveled well — are disgruntled by the halftime deficit.

The matchup is the first of the day, pitting the No. 5 and No 4 seeds of the East Region against one another, as well as two coaching legends: Bob Huggins and John Calipari.

The winner of this game will most likely face the overall No. 1 seed Ohio State in the Sweet 16.