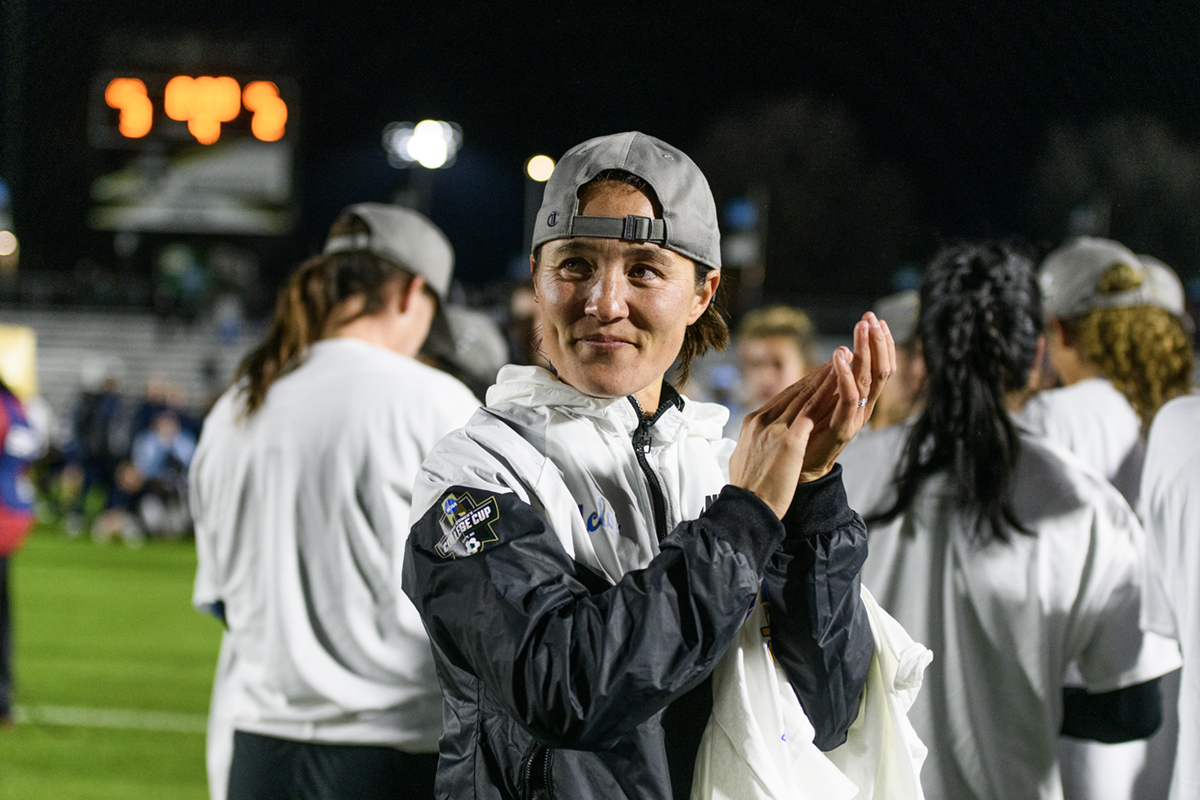 With her team down 2-0 with 10 minutes left in the national title game, the camera panned to Margueritte Aozasa.

The first-year UCLA women’s soccer coach had a calm and collected look as it appeared her team’s magical season was coming to an end.

But 30 minutes later, after one of the most improbable comebacks in collegiate sports history, Aozasa was being drenched by a Gatorade bath as her squad had been crowned national champions.

In the process, Aozasa became the first rookie collegiate women’s soccer head coach to win the national title. From an outsider’s perspective, it may have seemed impossible. The voters who ranked UCLA 13th in the preseason poll certainly didn’t believe, nor did the Pac-12 coaches who picked Stanford as the top team in the conference – but Aozasa had a vision.

When Amanda Cromwell left UCLA for the Orlando Pride in 2021 after nine seasons that featured three College Cup appearances and the program’s first national title, it was a shock to the NCAA women’s soccer world. Although the Bruins were coming off two early tournament exits, no one could have predicted a coach of Cromwell’s caliber leaving the prestigious program she helped build.

With the head-coaching position opening up in Westwood last December, most in the collegiate soccer circle expected the vacancy to be filled by a head coach from another university. One who had accumulated plentiful success over their career and would continue the winning tradition the Bruins had established.

So you can probably imagine the surprise on Dec. 29, 2021, when UCLA announced it had hired Aozasa to be its next coach. I personally remember waking up from a nap, rolling over, checking my phone to see the announcement and saying, ‘Who?’.

I couldn’t fathom why a program of UCLA’s quality would hire a head coach with no head-coaching experience.

Safe to say, I was proven very, very wrong.

After looking into Aozasa’s background a little more, it became clear the Bruins hired a young coach that would bring with her a championship pedigree and an incredible recruiting background. But after accomplishing everything possible as an assistant coach, could she get the job done as the one in charge?

When my fellow beat writers at the time and I sat down with Aozasa four months after her hiring, it was clear to the three of us that she was the real deal. We were met with a coach who had a permanent smile on her face and an immense amount of knowledge about the game.

UCLA raced off to a 13-0 start to the season – its best in school history – with notable road wins over then-No. 2 Duke and then-No. 1 North Carolina in the same week. The victories catapulted the Bruins to the No. 1 spot in the national rankings, a position they held for nine straight weeks through the final week of the regular season.

The entire time, players were raving about the culture shift and how great of a job the new coaching staff was doing unlocking each of their individual potentials. It was clear from the start of the season that the Bruins made the right hire.

Even when UCLA faced adversity late in its season, losing its bid for a third consecutive Pac-12 championship with losses to Stanford and USC, Aozasa kept the Bruins focused on its ultimate goal: a national title. She knew it was important they reached peak form when it mattered most.

And that is exactly what the blue and gold did, cruising through the first five games of the NCAA tournament, culminating with a dominant 3-0 victory over fellow No. 1 seed Alabama in the semifinal contest to propel UCLA to the national championship game against North Carolina.

If Aozasa wanted to win it all in her first season at the helm of UCLA, she had to find a way to defeat someone who had already won 21 national titles: Anson Dorrance.

Aozasa coached a masterclass Monday, not only making critical adjustments throughout the contest but presenting a calm demeanor and urging her team to continue to fight. After junior forward Reilyn Turner’s equalizer with 16 seconds left and graduate student midfielder Maricarmen Reyes’ game-winner in the second overtime, the Bruins had attained their ultimate goal.

The young coach, who no one predicted to bring home a championship in her debut season, accomplished everything possible in her first year in charge. Pac-12 Coach of the Year, national champion, Pacific Region Staff of the Year – she left nothing on the table.

Aozasa finally brought UCLA back to the level of national prominence it had drifted away from in recent years.

And despite the upcoming departure of some of the Bruins’ top players, the future looks even brighter.

Aozasa brought with her the No. 1-ranked recruiting class in the country, and the Bruins will see the return of at least six starters from its national championship team.

Offensively, the forward trio of sophomore Lexi Wright, graduate student Ally Cook and freshman Bridgette Marin-Valencia will return to lead the charge up front, with freshman Ally Lemos controlling everything in the middle. If Turner decides to return for her senior season, the Bruins will have an immediate front-runner for the MAC Hermann Trophy as well.

When it was all said and done, Aozasa’s first season at UCLA was a dream come true. But it looks like her legacy in Westwood is just beginning. 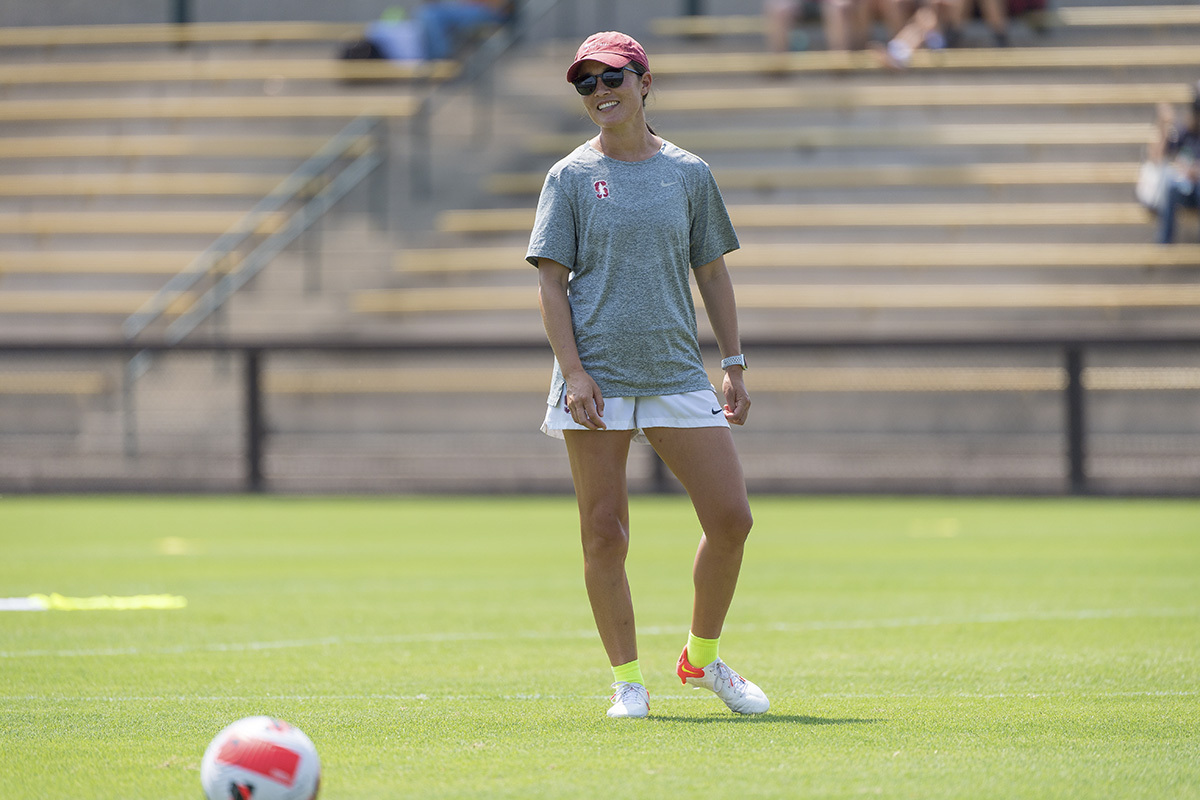 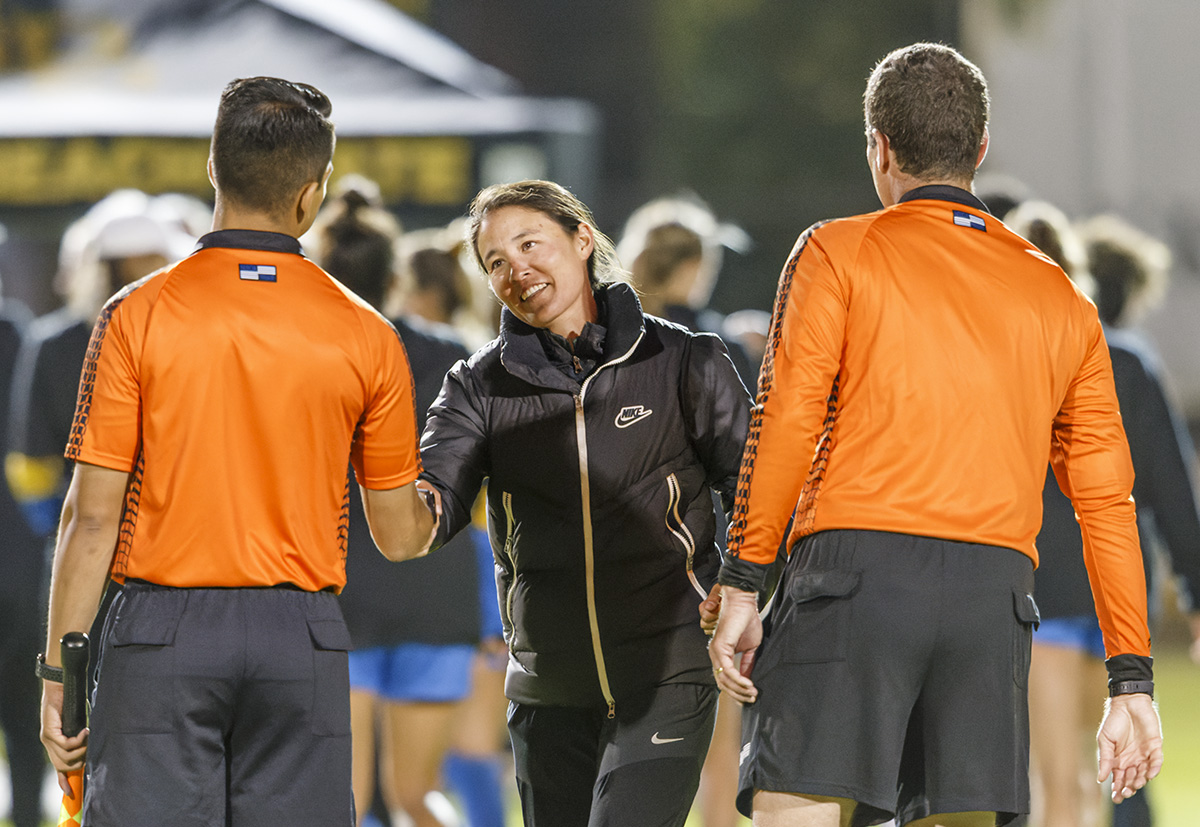 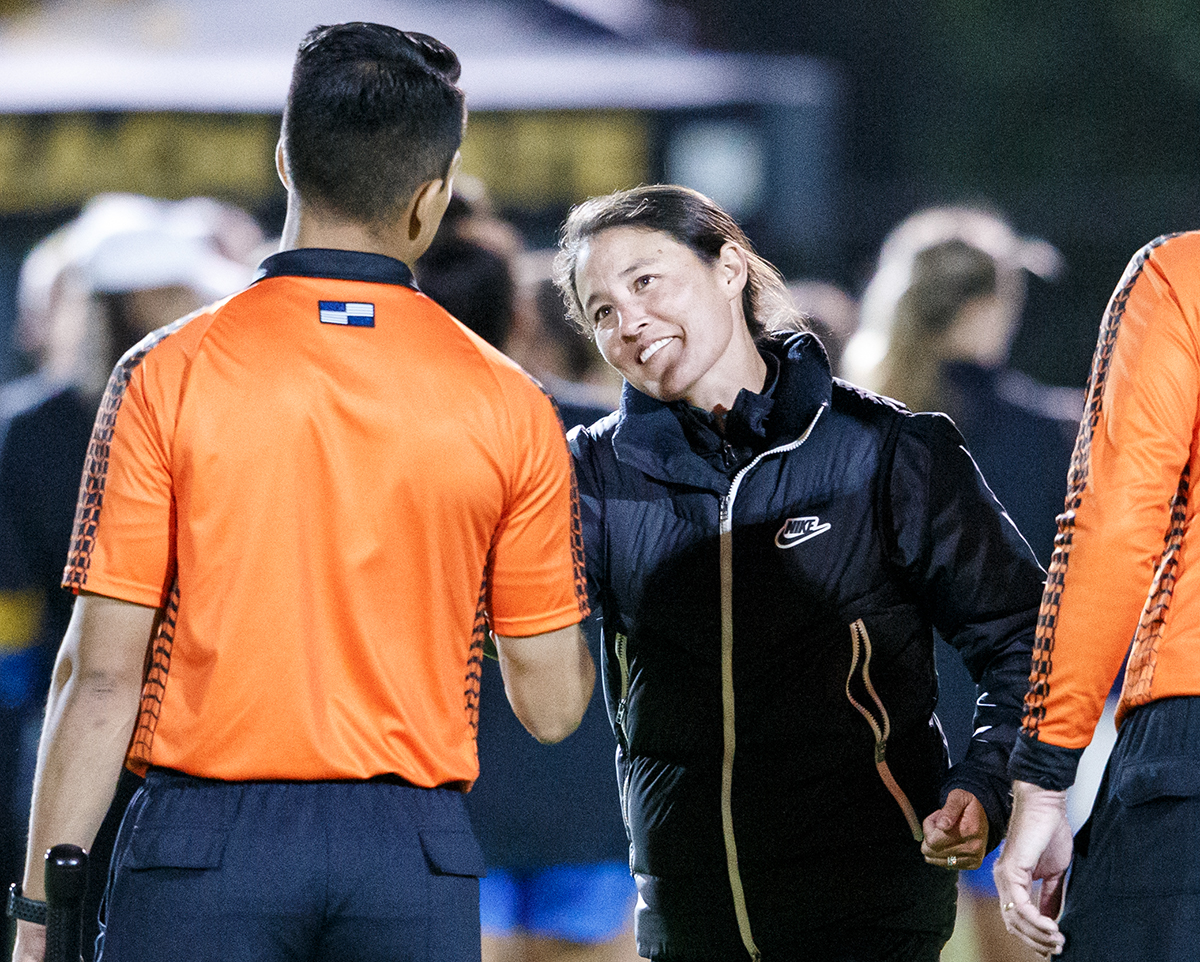 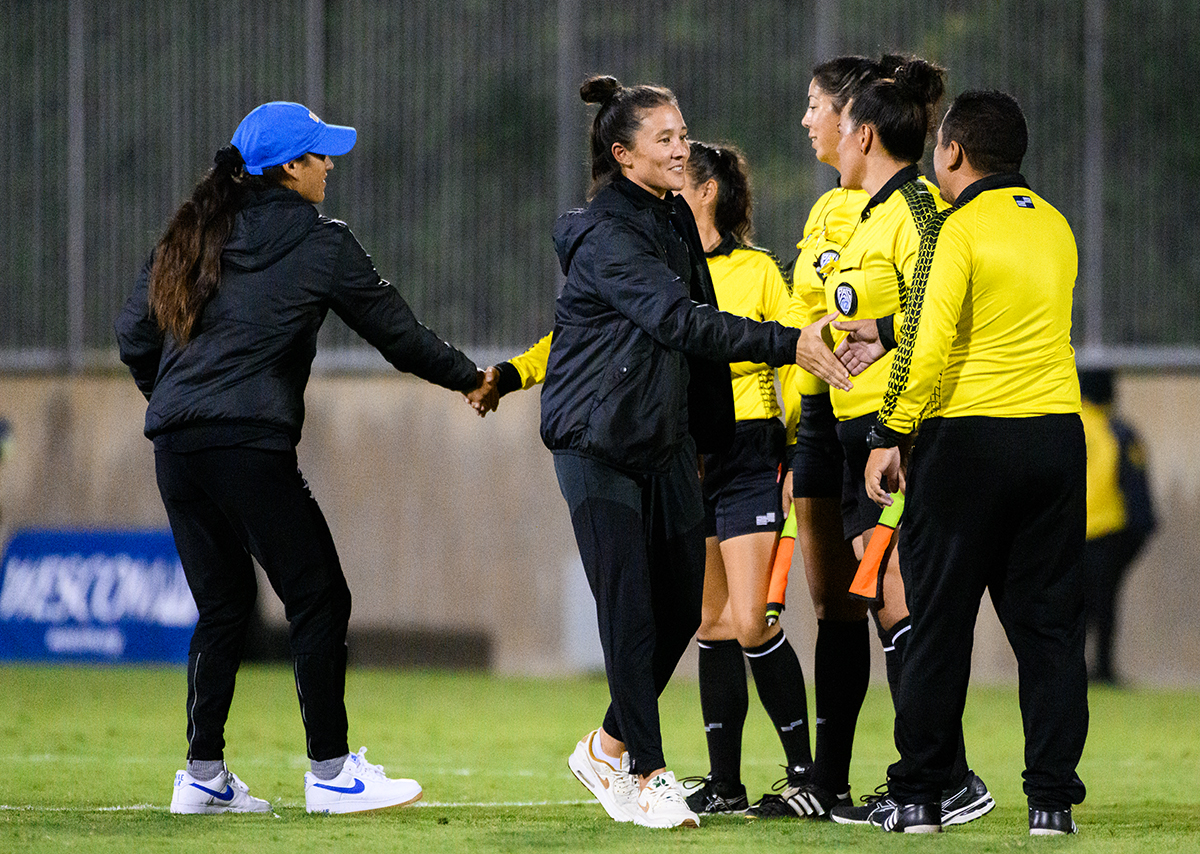