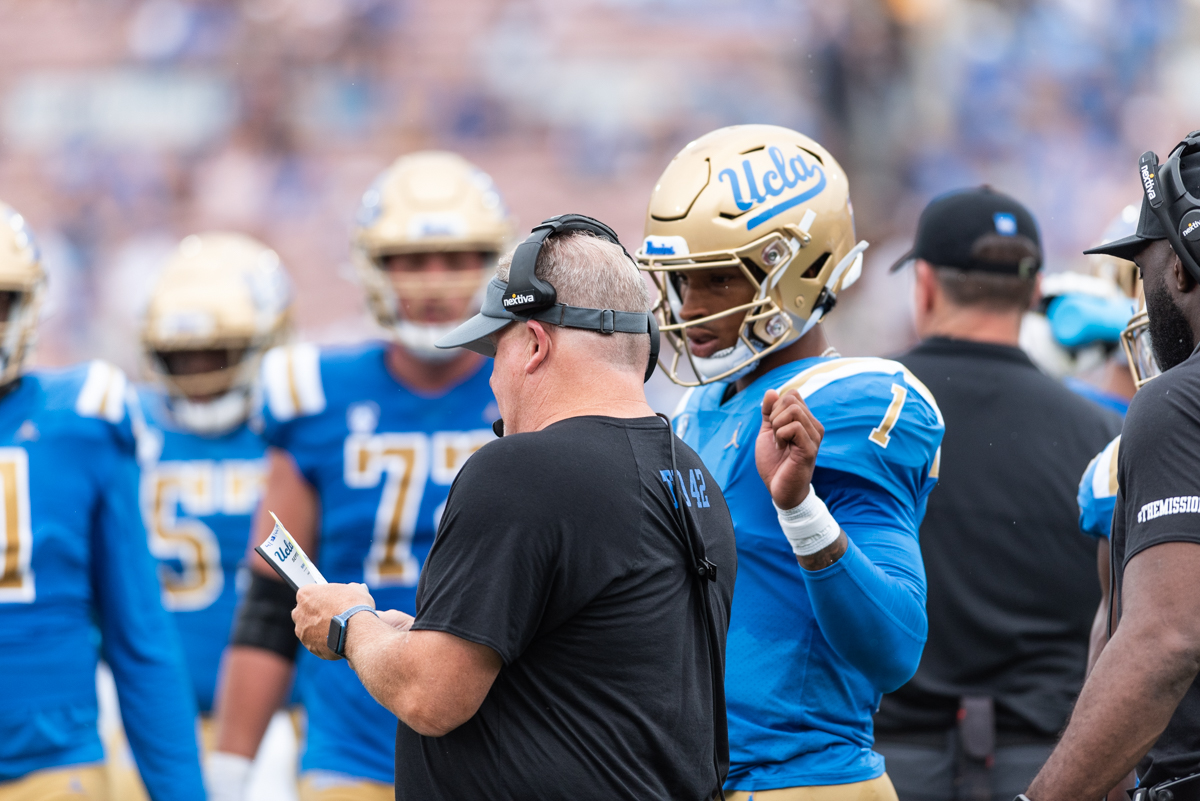 UCLA football (2-0) secured its second consecutive blowout win to start its 2022 season by defeating Alabama State (2-1) 45-7 at the Rose Bowl on Saturday. Missing both their starting quarterback and running back for much of the game, the Bruins pulled away in the second quarter and didn’t look back, shutting out the Hornets in the second half. Senior staffer Francis Moon gives his five main takeaways from the blue and gold’s second win of the year.

It would be an understatement to say the Bruins were expected to win this game.

But what was unexpected was that it was mostly accomplished by the second-stringers.

On UCLA’s opening drive, senior running back Zach Charbonnet was noticeably missing from the field, which led to speculation of a potential injury. However, though he was limited at practice last week, Charbonnet was dressed in full pads on the sidelines and remained as such for the entirety of the game.

Then, early in the second quarter, redshirt senior quarterback Dorian Thompson-Robinson took a hit to his ankle and spent the rest of the day on the sidelines alongside Charbonnet.

Following the game, coach Chip Kelly labeled the stars as unavailable and declined to comment further on the subject, and it is unclear if they are on track to play next week against South Alabama.

It’s entirely possible that either Thompson-Robinson or Charbonnet may be dealing with more significant ailments than the team is willing to release to the public. But pump the brakes on the panic meter because it’s likely that we can chalk this one up as simply a precaution.

Welcome to the Rose Bowl

Firsts were the name of the game against Alabama State.

With a depleted lineup and little to lose after securing a big lead, Kelly used the game as a true warmup, giving second- and third-string players a chance to show what they have to offer.

Redshirt junior tight end Hudson Habermehl got things started with a 25-yard touchdown reception late in the first quarter, marking the first time the Bruin has found the end zone.

Then, redshirt sophomore quarterback Ethan Garbers recorded the first two rushing touchdowns of his career in the second quarter to help UCLA pull away.

In the second half, two running backs – freshman T.J. Harden and redshirt junior Christian Grubb – also scored the first touchdowns of their collegiate careers, with the latter making the first appearance of his career after joining the Bruins in 2019.

On the defensive side, freshman linebacker Jalen Woods took advantage of his first game action by accounting for the second-most tackles on the team with five, including a tackle for loss.

Both of the Bruins’ interceptions were also courtesy of new faces on the field, as redshirt freshman defensive backs Jaylin Davies and D.J. Justice both nabbed the first picks of their careers.

While we may not hear some of those names again too often this season, UCLA’s depth and young talent may be some of the best it’s had in years.

Who will be the backup running back?

With Charbonnet on the sidelines, the Bruins got a chance to dig deeper into their running back room.

After UCLA lost Brittain Brown to the NFL in the offseason, redshirt junior Keegan Jones became the de facto backup running back, and Jones received the majority of the carries in the first half while also seeing some action in the passing game as both a receiver and a blocker.

But with the blue and gold holding a 24-point lead at halftime, Jones did not see another rushing attempt for the rest of the day. Instead, four other players ended with six-plus carries, each individually outgaining Jones.

Harden emerged as the team’s leading rusher with 56 yards and a touchdown on seven attempts, while Grubb also found the end zone while adding 55 yards on seven tries.

Redshirt junior wide receiver Colson Yankoff – who was a high school quarterback and had never received an in-game carry before, according to Kelly – also produced 35 yards on six carries. Late in the fourth, Kelly gave redshirt freshman Deshun Murrell a turn for two drives, and the running back turned it into 34 yards on six tries.

Furthermore, UCLA was led in the receiving category by freshman running back Carsen Ryan, who tallied 58 yards on three catches.

Don’t expect Kelly to completely turn to a running back by committee as he did with the Philadelphia Eagles in 2015, but the coach might have a chance to open up his playbook and take some of the load off Charbonnet down the road.

This game easily could have been a shutout.

Though it wasn’t worse than their start against Bowling Green, the Bruins certainly didn’t look like they deserved to be a 50.5-point favorite early on.

In particular, the secondary was gashed time and time again, as fans have become accustomed to watching in recent years with former defensive coordinator Jerry Azzinaro at the helm. The Hornets marched down the field with relative ease while keeping their offense on the field for long stretches, and minutes into the second quarter, the Bruins allowed a 21-yard receiving touchdown that cut their lead to seven.

Not to mention, Alabama State was without starting quarterback Dematrius Davis.

What was supposed to be another chance to show improvement instead resulted in a cause for worry early in the matchup, shining the spotlight on the pass defense as a weakness the Bruins will have to continue to focus on solidifying.

Similar to its first game, though, UCLA came out of halftime rejuvenated and shut out Alabama State for the rest of the game, securing two picks while allowing just two completions for 46 yards in the second half.

While it hasn’t mattered yet, UCLA will need to minimize mental lapses from the secondary if it wants to keep up with its more competitive opponents.

Latu be happy about

In April 2021, former Washington linebacker Laiatu Latu was told he couldn’t play football again because of a lingering neck injury.

On Saturday, the redshirt junior made an impact during his second game back from medical retirement.

After sitting out two seasons, Latu transferred to UCLA last December. Although he officially made his comeback last week against Bowling Green, this Saturday was an even better feel-good story for the Sacramento native.

Latu recorded three tackles, a quarterback hurry and two sacks – one of which resulted in one of the Bruins’ biggest highlights of the day.

Though the Bruins weren’t able to convert it into a touchdown because it was an illegal forward pass, Latu still emerged as one of the biggest winners of the day. 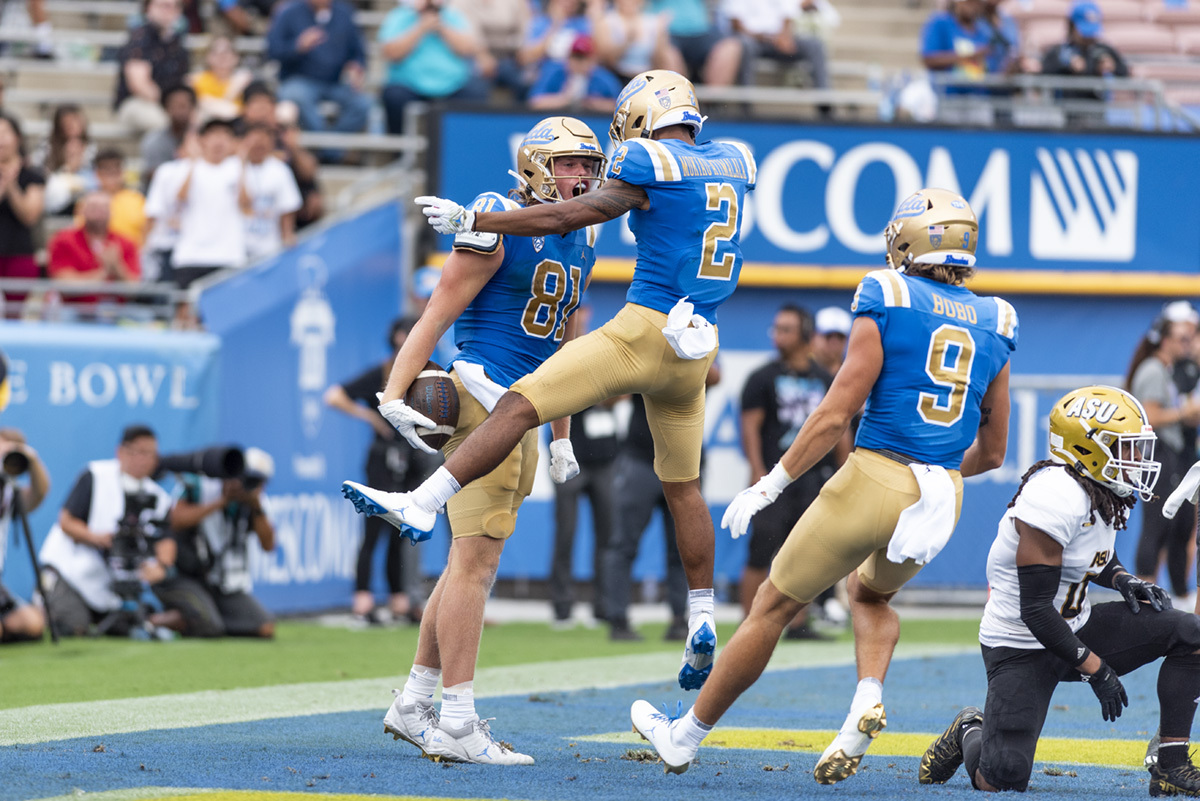 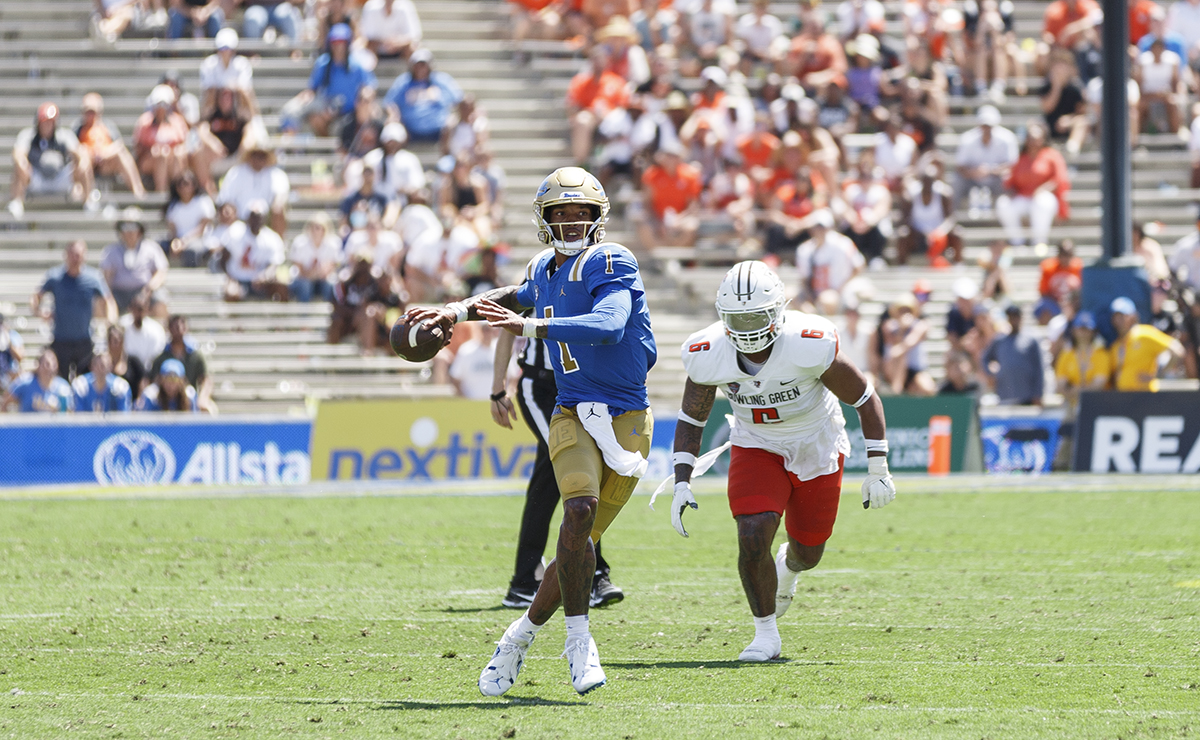 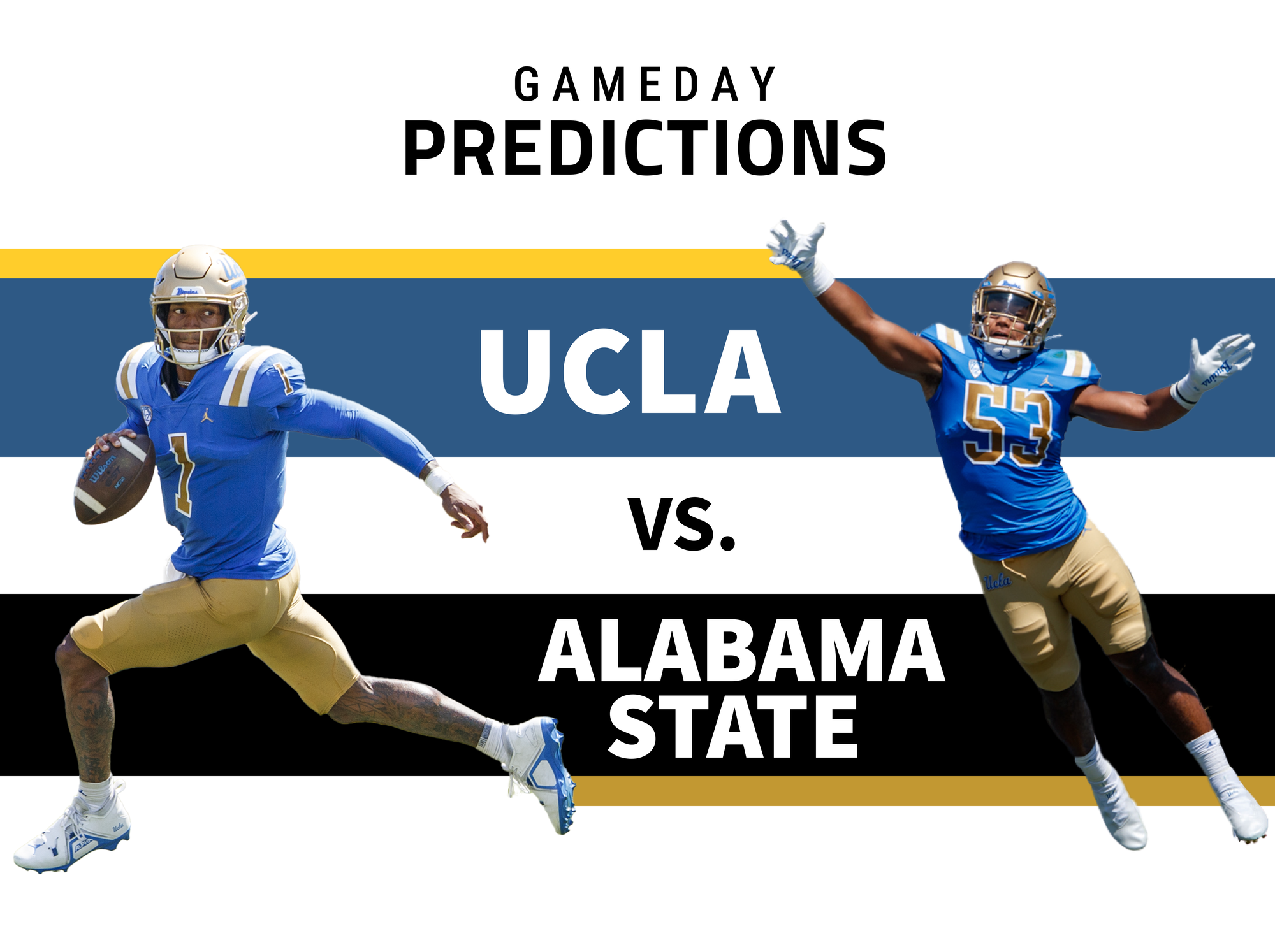 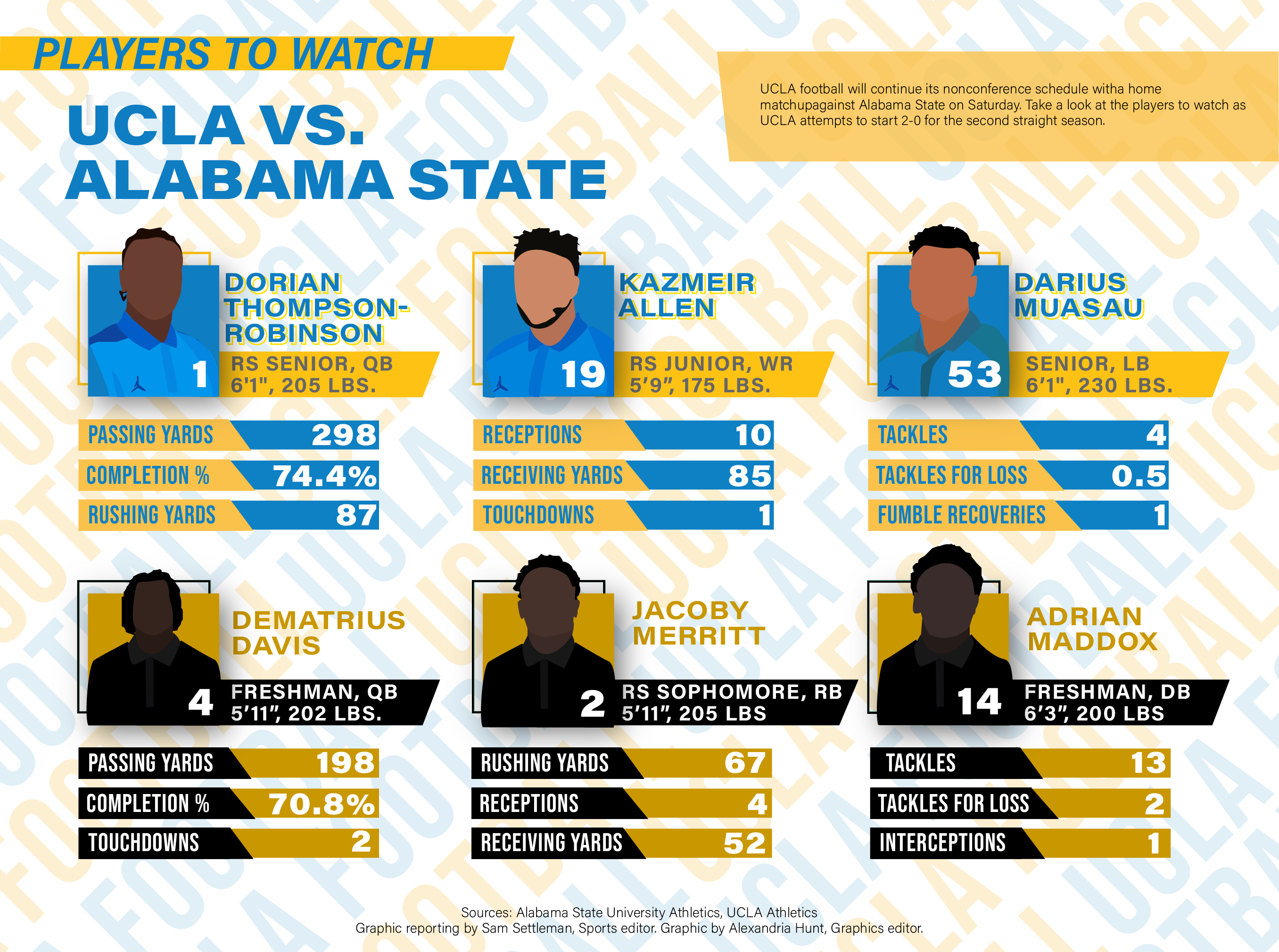