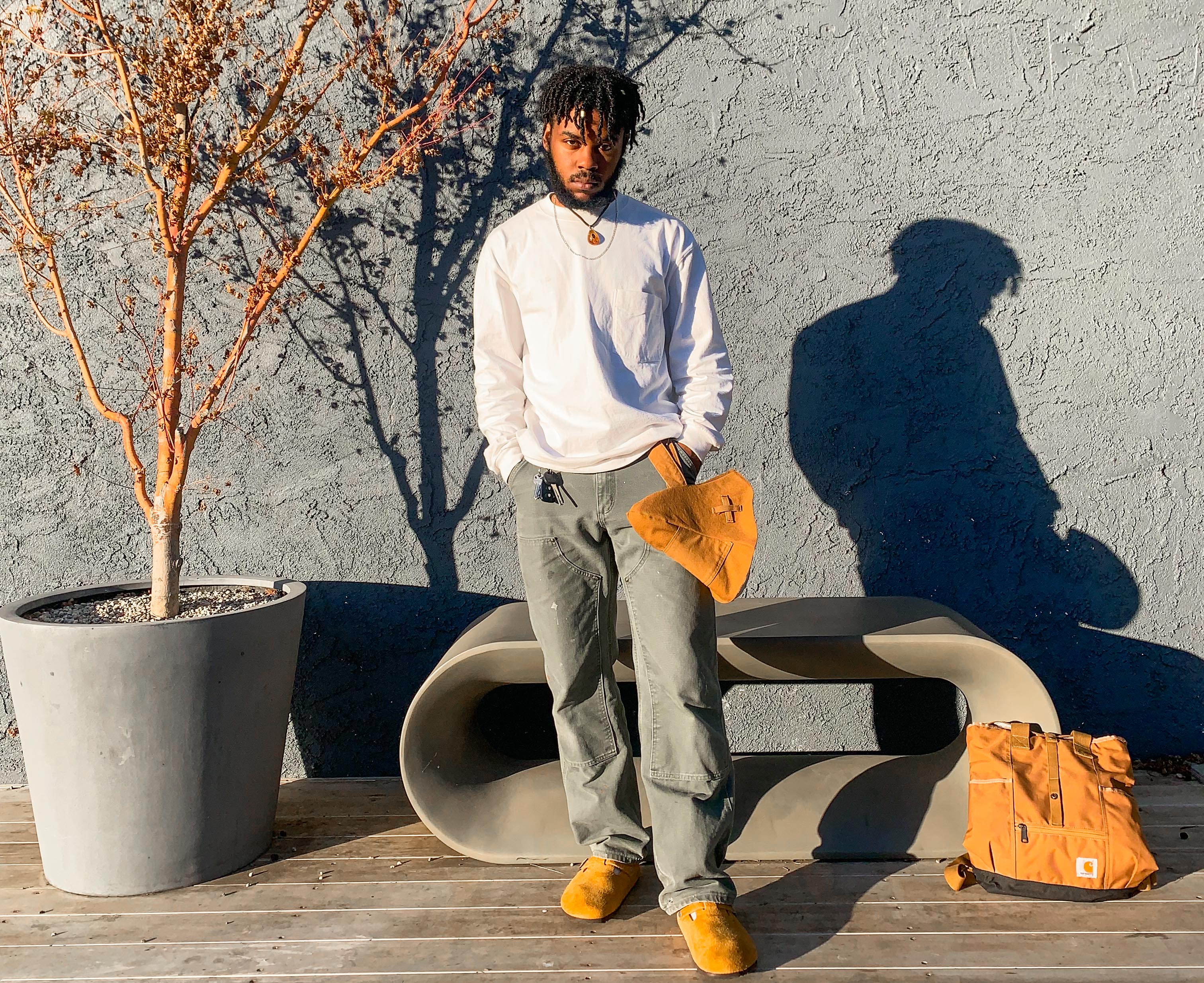 Ishmael Jasmin stands by a tree in front of a gray wall. The fourth-year psychology student said he draws inspiration for his streetwear-inspired designs from many places, ranging from downtown Los Angeles fabric stores to Japanese fashion. (Courtesy of Ishmael Jasmin)

Starting from a simple shirt, Ishmael Jasmin is sewing streetwear.

After receiving a sewing machine from his mom eight years ago, the fourth-year psychology student said his initial foray into fashion resulted in an unattractive top and caused him to step away from designing for five years. After high school, Jasmin was reintroduced to tailoring through simple alterations that he said motivated him to pick up the craft again, and he was further inspired to design by YouTube videos showcasing personalized patterns. Making his Fashion and Student Trends at UCLA runway debut Friday, he said his streetwear-inspired collection is infused with elements ranging from the stylistic influences of his Los Angeles upbringing to silhouettes and fabrics characteristic of Japanese fashion.

“I want them (the audience) to see that streetwear can be mixed with a lot of different styles,” Jasmin said. “I never want to be boxed in as a designer … because I feel like I can design anything.”

Although Jasmin said his design process varies from piece to piece, many of his garments start at the fabric store or with thrifted materials. For one piece in the collection – the American Gothic Jacket – Jasmin said he found its namesake textile buried under other skeins of fabric after an unsuccessful shopping trip. The bolt of fabric was an unconventional woven texture, and he said the addition of the American Gothic painting and bold proclamations like “Time is Now” added to its eye-catching nature.

For another jacket, the Black Inferno Jacket, Jasmin said he discovered the focal point of the garment – strips of red fabric intersecting along its front – at a different fabric store in downtown LA. Though there was a full bolt he said he opted to purchase half a yard, as he had plans to combine it with a black fabric he already owned in excess. After the American Gothic Jacket, Jasmin said he hoped to hone in on detail so he created a union of the textiles in a crisscross pattern that wraps the jacket.

“People have told me it (my process) is a little everywhere,” Jasmin said. “I’m always getting fabrics, thrifting, going downtown – and I might not buy fabric at that moment, but I’m always looking for new fabrics and ways to use what I’ve bought.”

Separate from the design process, Jasmin said he went into model selection with the notion that he would pick models that shared his stature since he only had experience creating clothes in his size. Once he realized this goal was unrealistic, he said he pivoted to choosing models who looked like they enjoyed walking down the runway, as opposed to focusing on the intricacies of each individual’s walk. As a model for Jasmin’s line, second-year computational math student Ben Cloutier said he auditioned with an affinity for the show’s fully student-designed lookbook and was selected by Jasmin through FAST’s process of model auditions and callbacks.

Although he is walking for other designers as well, Cloutier said Jasmin’s garments are comparatively the closest to what his personal closet is composed of, which has allowed him to feel more comfortable in his elevated jeans and gray hoodie ensemble. He said the walk he plans on performing is confident and chill, with sharp poses that exude masculinity. Though the show itself is still undergoing some tweaks, Cloutier said he was able to witness Jasmin sewing his outfit during their initial fitting at the UCLA MakerSpace – an exciting experience because of the personalized aspect of the creation.

“It was really cool to see him laying out the fabrics and sewing,” Cloutier said. “I’ve never had an experience where someone has made clothes specifically for me.”

[Related: Alumnus reflects on journey from student-athlete to style influencer]

As Jasmin’s high school friend and neighbor, Ryan Toovi said he has been able to act as a sounding board for Jasmin and feels intimately familiar with his design process outside of the modeling sphere. Professionalism is at the forefront, and he said Jasmin is detail oriented to the point of being hard on himself – but the results are garments that consistently showcase his best efforts.

Setting aside time to design each piece to his best ability is no easy task, though, Jasmin said. Balancing designing and a degree, he said he often works at night and stays awake until he feels he has been adequately productive. As a psychology student, Jasmin said he has plans to work in the field with a concentration on mental health, but he also wants to squeeze in fashion on the side since he sees it as a lifelong passion. Because of his separate vocational field, though, he said he hopes to use FAST to showcase his pieces at the end of the design process, which is his favorite part.

“This might be the only time I’m able to do a fashion show,” Jasmin said. “This collection is more for me to express myself and show what i’ve learned over the past two years and then people can interpret it however they want to.” 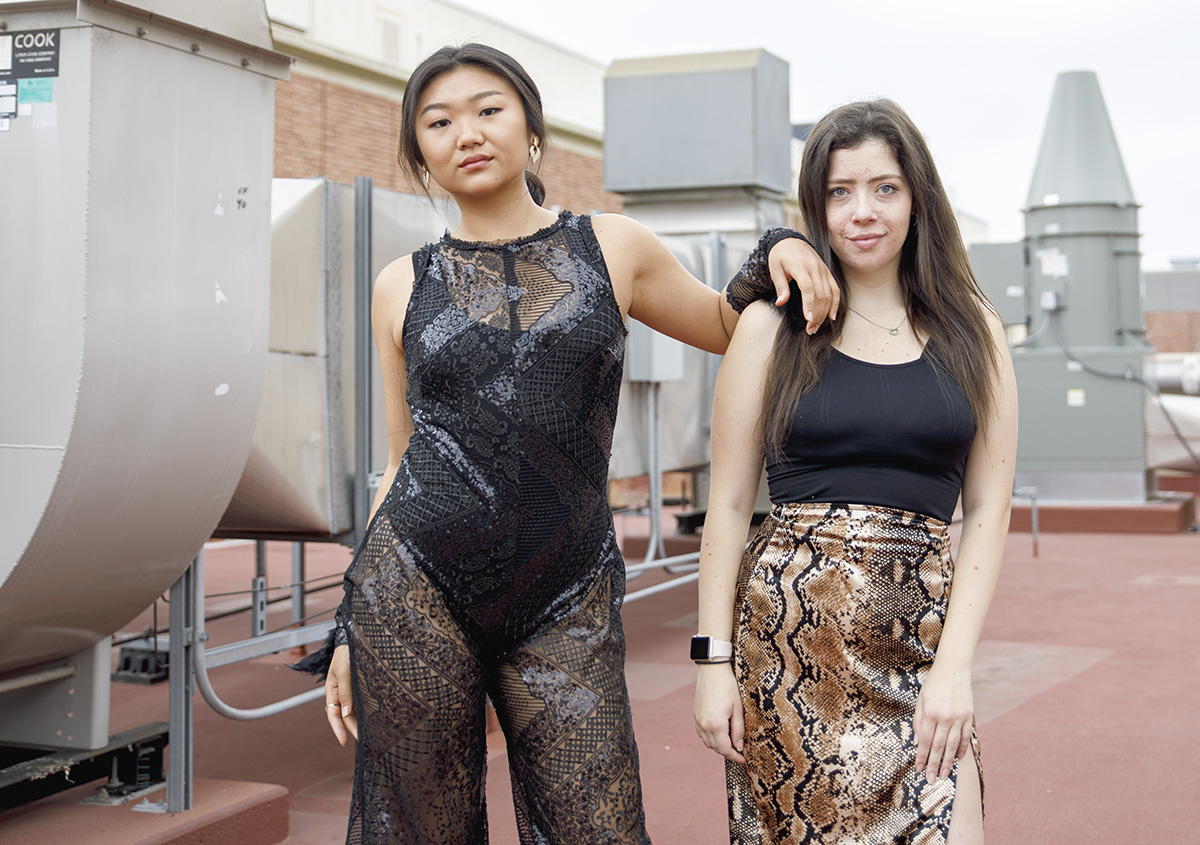 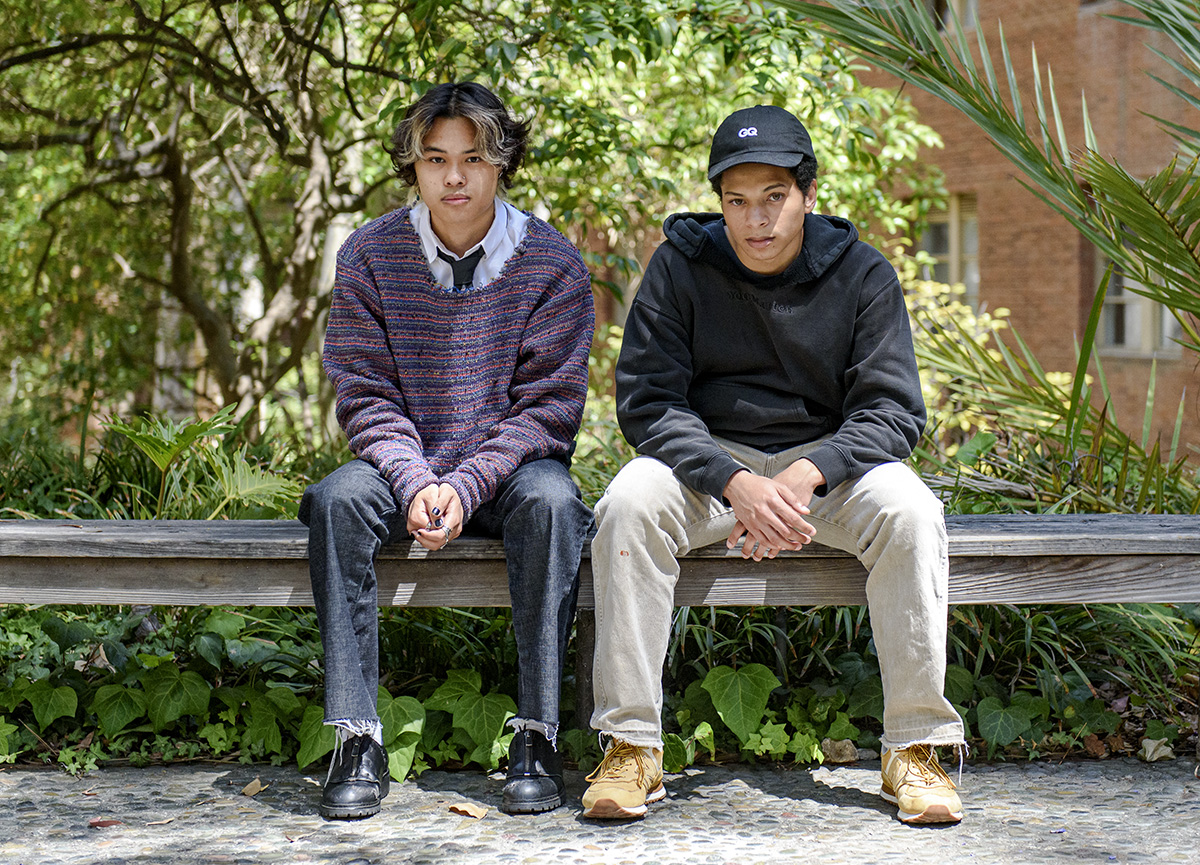 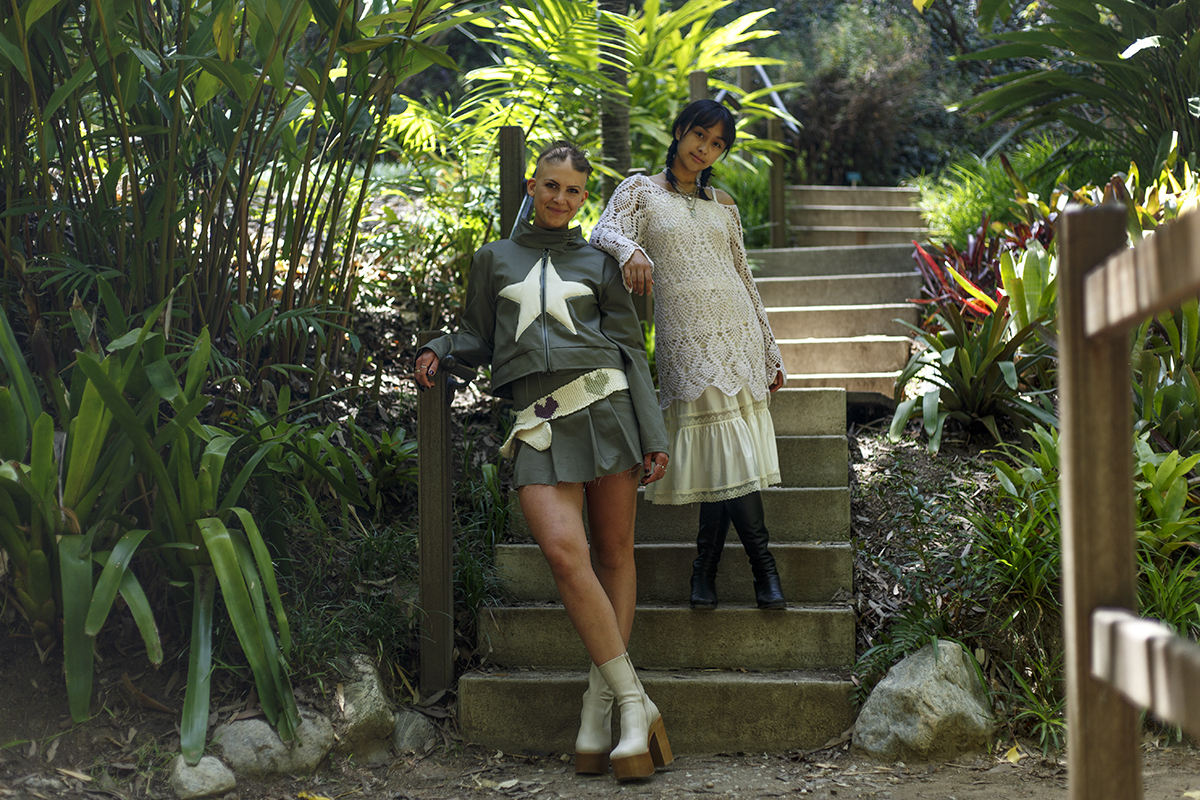 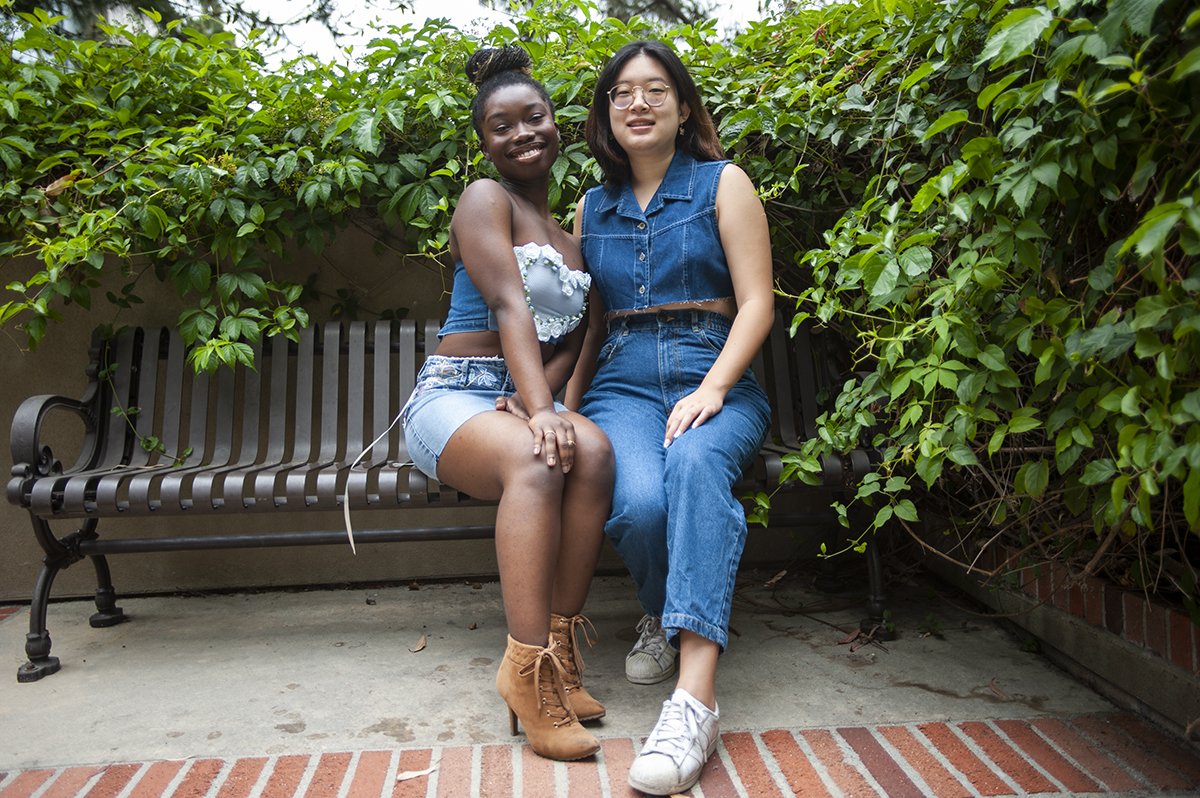