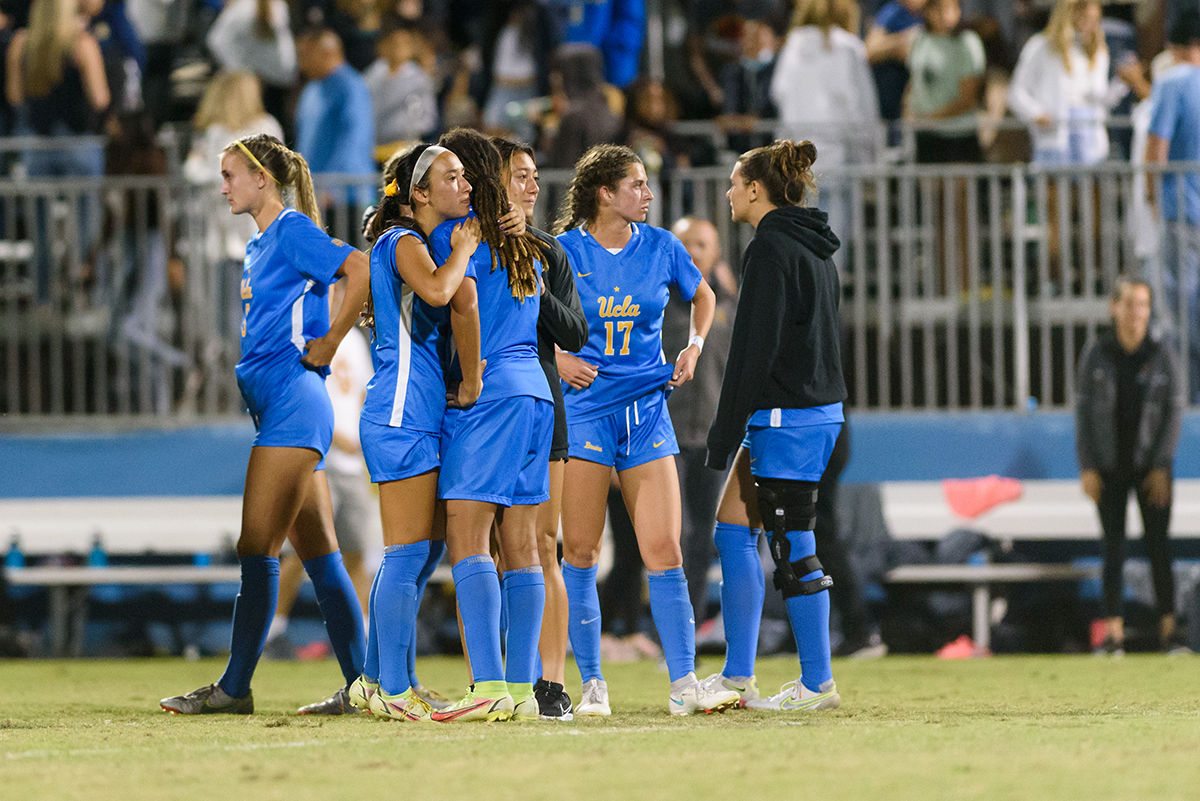 Members of UCLA women’s soccer console each other after its NCAA Tournament loss to UC Irvine. The Bruins hadn’t lost a game all season before their defeat to the Anteaters. (Sakshi Joglekar/Assistant Photo editor)

With the second-most NCAA championships of any school in the country, UCLA is known for its postseason success. In 2022, however, many Bruin teams have seen their seasons come to an earlier end than expected. From gymnastics to women’s basketball, the Daily Bruin Sports editors debate which UCLA team had the most heartbreaking postseason exit.

There was no reason why the Bruins shouldn’t have won.

They hadn’t lost a game all season.

In fact, they were riding a 26-game unbeaten streak capped off by a win against USC to claim the Pac-12 title.

Even still, the Bruins found themselves fighting to keep their tournament run alive just 13 and a half minutes into the postseason.

Coming into the first round of the NCAA tournament, No. 2 seed UCLA women’s soccer was poised and ready to take down its unseeded UC Irvine foe. The Bruins hadn’t lost to the Anteaters since 1995, having defeated them 3-1 in their first match of the season in August to bring their overall head-to-head record to 9-1-1.

By all standards, it should have been an easy win at home – a satisfying win for the Bruin faithful to witness before the team set its sights on more challenging tournament opponents.

But in the 14th minute, UCLA found itself in a hole for only the second time this season, watching a ball sail into the net off the head of an Irvine forward.

The Bruins got close to equalizing the score on several occasions, with the ball frequently ricocheting off the crossbar as UCLA outshot Irvine 19-4.

As the clock continued to count down with no Bruin goal in sight, reality started to sink in: UCLA would be done in the first round for the first time this century.

When the excruciating 90 minutes finally let up, the heartbreak showed through on the field.

And if you still don’t believe me that this was the biggest heartbreaker of the year, take it from junior defender Brianne Riley herself.

“This is never the way we wanted it to end,” Riley said after the game. “We wanted it, and it just didn’t come. It’s unfortunate, and we’re heartbroken right now.”

[Related: No. 2 seed UCLA women’s soccer falls to UC Irvine in 1st round of NCAA tournament]

Emma Malabuyo’s score appeared on the scoreboard, and the flashbacks began to flood in.

The freshman had gone 9.975 in the anchor spot, saving UCLA gymnastics’ wobbly beam rotation and seemingly sending the blue and gold straight to the NCAA championships. It was eerily reminiscent of former Bruin Christine Peng-Peng Lee’s perfect 10 on beam to clinch the national title in 2018.

Needing a top-two finish at the NCAA Raleigh Regional to move onto nationals, UCLA had put itself in the perfect position. The Bruins held the outright lead through two rotations and sat tied atop the leaderboard with one event to go.

While UCLA had proven its prowess on beam throughout the season, nerves began to creep in. A late substitution and shaky skills throughout put a lead that once seemed insurmountable in grave jeopardy.

Until Malabuyo, a freshman but battle-tested competitor, righted the ship and placed it squarely on a path for Fort Worth, Texas.

But unlike Lee’s heroics in 2018, Malabuyo’s performance hadn’t put the nail in the coffin for the opposition.

Missouri’s floor rotation had brought itself off the brink of elimination, but the Tigers still needed a 9.925 from Amari Celestine on the final routine of the night to put themselves ahead of the Bruins and into the NCAA championships.

Moments after Malabuyo’s score came in, Celestine took off across the floor for her first pass. It was a sky-high full-in, but she lost control for the slightest moment, bouncing back toward the edge of the mat. In the process, her right foot appeared to cross the white line surrounding the competition floor – an automatic 0.100 deduction that should’ve been the clincher for UCLA.

Instead, the line judge didn’t raise her flag in the air, Celestine was perfect the rest of the way and the scoreboard flashed the magic number – a 9.925.

Jubilation turned into blank stares as the Bruins were sent packing for the second straight year.

What precedes a heartbreak? Love.

Unfortunately for the Bruins, they had to find that out the hard way in March.

As with many relationships, everything was going swimmingly for UCLA men’s basketball. The team was well on its way to a second consecutive Final Four, making it to the Sweet 16 with relative ease.

By the time their regional semifinal tipped, the Bruins were the highest-seeded team in their region. No. 1 seed Baylor, No. 2 seed Kentucky and No. 3 seed Purdue had all been upset, leaving UCLA as the East Region favorite with only a No. 8 seed and a No. 15 seed standing in its way of a trip to New Orleans.

In the City of Brotherly Love, North Carolina guard Caleb Love broke UCLA’s heart into a million pieces with one of the best March Madness performances in recent memory. Love – a career 35% shooter – torched the Bruins for a career-high 30 points and four assists, cashing in on six shots from beyond the arc.

The most crushing part, though, was the timing of Love’s triples. UCLA entered the final two minutes with a three-point lead and seemingly had possession of the ball after Love clanked a 3.

But after a miraculous save from Tar Heel forward/center Armando Bacot, Love chased down the ball and hit a snatch-back 3 over UCLA junior guard Johnny Juzang.

A possession later, a miscommunication between senior guard Jules Bernard and junior guard/forward Jaime Jaquez Jr. left Love open for a pull-up a few feet behind the line.

It ended UCLA’s season, breaking the hearts of Bernard, Jaquez and Bruin fans everywhere. The next time the Bruins find love, they better hope Love isn’t standing in their way.

A Bruin pin hitter prepared to serve with bated breath.

Following a kill from its frontcourt middle blocker, UCLA men’s volleyball stood five points away from taking down No. 1 Long Beach State in the National Collegiate Men’s Volleyball Championship semifinal at Pauley Pavilion.

But, this story – a tragedy – had already been written.

With the same teams, same venue and same date – just four years prior.

On May 5, 2018, and 2022, a battle between two schools separated by the 405 Freeway commenced. Thirsting for an over-decadelong return to glory, the Bruins sat in the driver’s seat, en route to a potential upset of the top-seeded team in the tournament.

Suffocated by the cheers of the opposing team’s student section, UCLA’s servers – Grant Maleski four years prior and redshirt junior opposite Kevin Kobrine in 2022 – completed their windups, jumped and promptly crashed the ball straight into the net.

The Beach rode off the error, both times sailing away to a set win that ultimately led to their come-from-behind victories.

This year, it started with the Bruins shooting ahead two games to none, seemingly a dagger of a start in a best-of-five semifinal match. But UCLA would rattle off 13 service errors – including Kobrine’s fifth-set misfire – in the final three frames, collapsing in heartbreaking fashion.

A squandered opportunity against the same team it fell to in years past. A lost chance to be crowned the best team in men’s volleyball. All of this spiked away on the same date – a final nail in the coffin.

And the Bruins will have to hold their breaths a little longer for their next shot at a championship.

Prior to the start of the season, coach Cori Close touted her team as the second-most talented roster in her 11 years at UCLA.

After the Bruins squandered a chance to make a fifth straight Sweet 16 appearance a year ago, the 2021-2022 campaign was supposed to be a redemption season for UCLA women’s basketball.

Instead, another streak was broken. The Bruins failed to make the NCAA Tournament and were placed in the Women’s National Invitation Tournament for the first since 2015, when they won it all.

In all fairness, we never saw the roster at full strength. But even still, the blue and gold took Oregon – a No. 5 seed in the Big Dance – to the final seconds in the quarterfinal of the Pac-12 tournament. After the loss, Close argued it’d be difficult to say her team wasn’t one of the top 68 in the country.

And she was right – which makes the Bruins’ eventual loss to South Dakota in the WNIT semifinal all the more gut-wrenching.

Facing Wyoming after two relatively uncontested wins at home, UCLA showed its grit and character even in a lost season with a triple-overtime victory that showed it had the necessary talent and coaching to go all the way.

UCLA carried the momentum into the next round, avenging a midseason loss to Oregon State to play another familiar foe from earlier this year in South Dakota State, which stood as the most formidable opponent in the blue and gold’s path to the title.

The Bruins maintained the advantage for most of the first half, even holding a five-point lead in the third quarter. Tied at 58 with just over a minute remaining, the team had a chance to reverse its early-season trends and close out a tight game.

Instead, it was deja vu – another last-second loss as UCLA failed to convert in crunch time.

Blame the lack of rest, the injuries or whatever else – the bottom line is the Bruins had a clear opportunity to salvage what was once a season with potential national-championship aspirations by winning a WNIT title but instead proved the NCAA committee right.

What was supposed to lead to a victorious sendoff for UCLA’s eight graduates became just another blip in a season that can best be described as a disappointment. 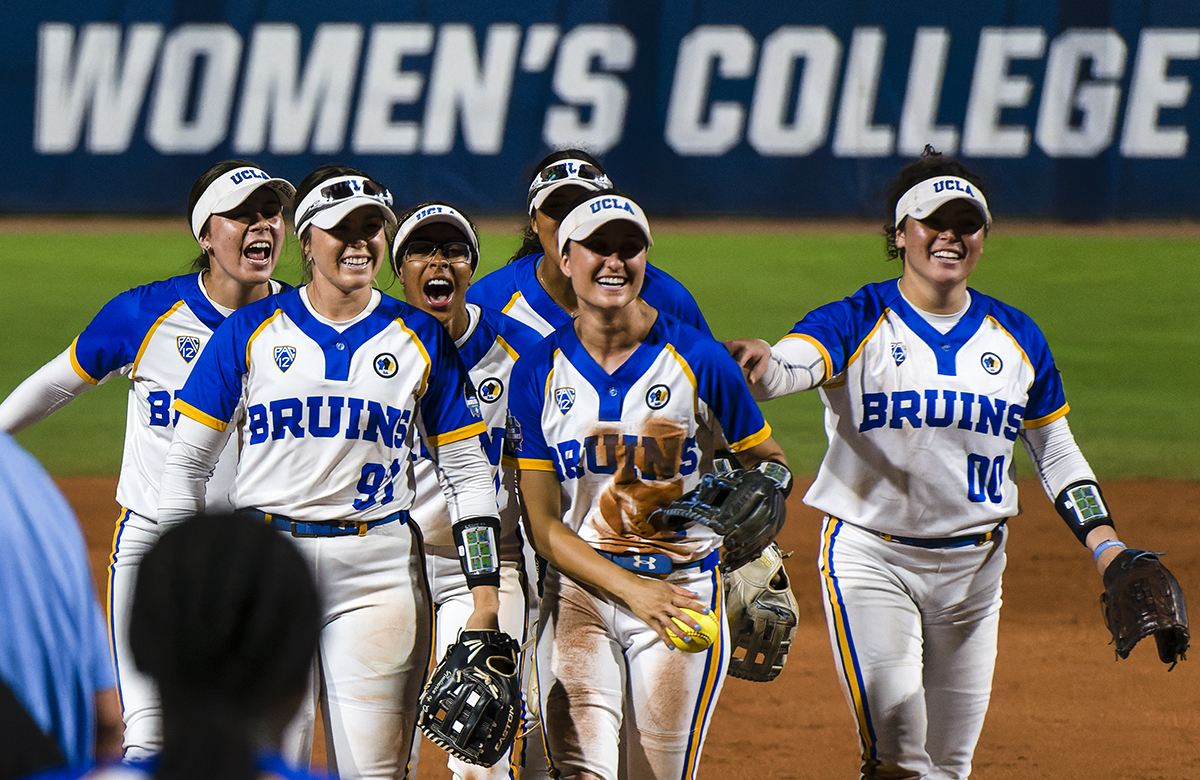 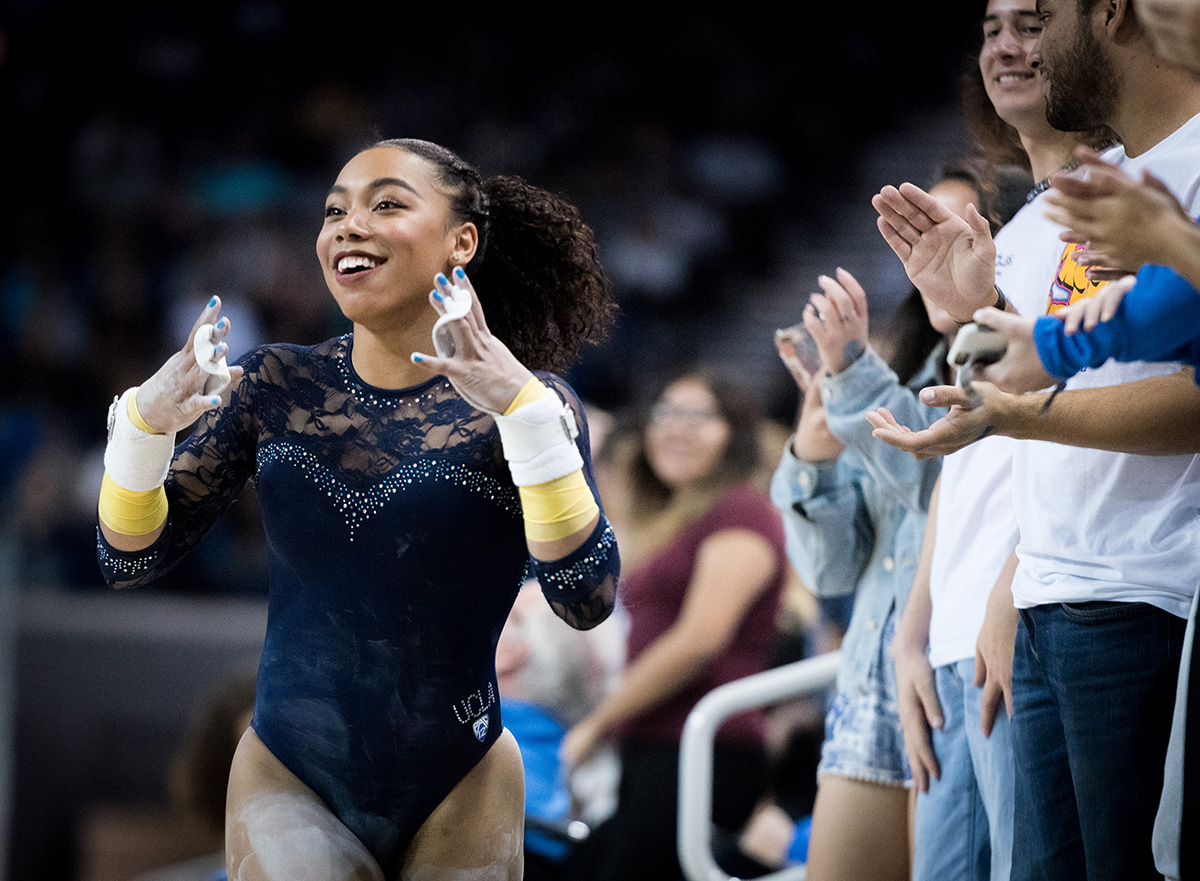 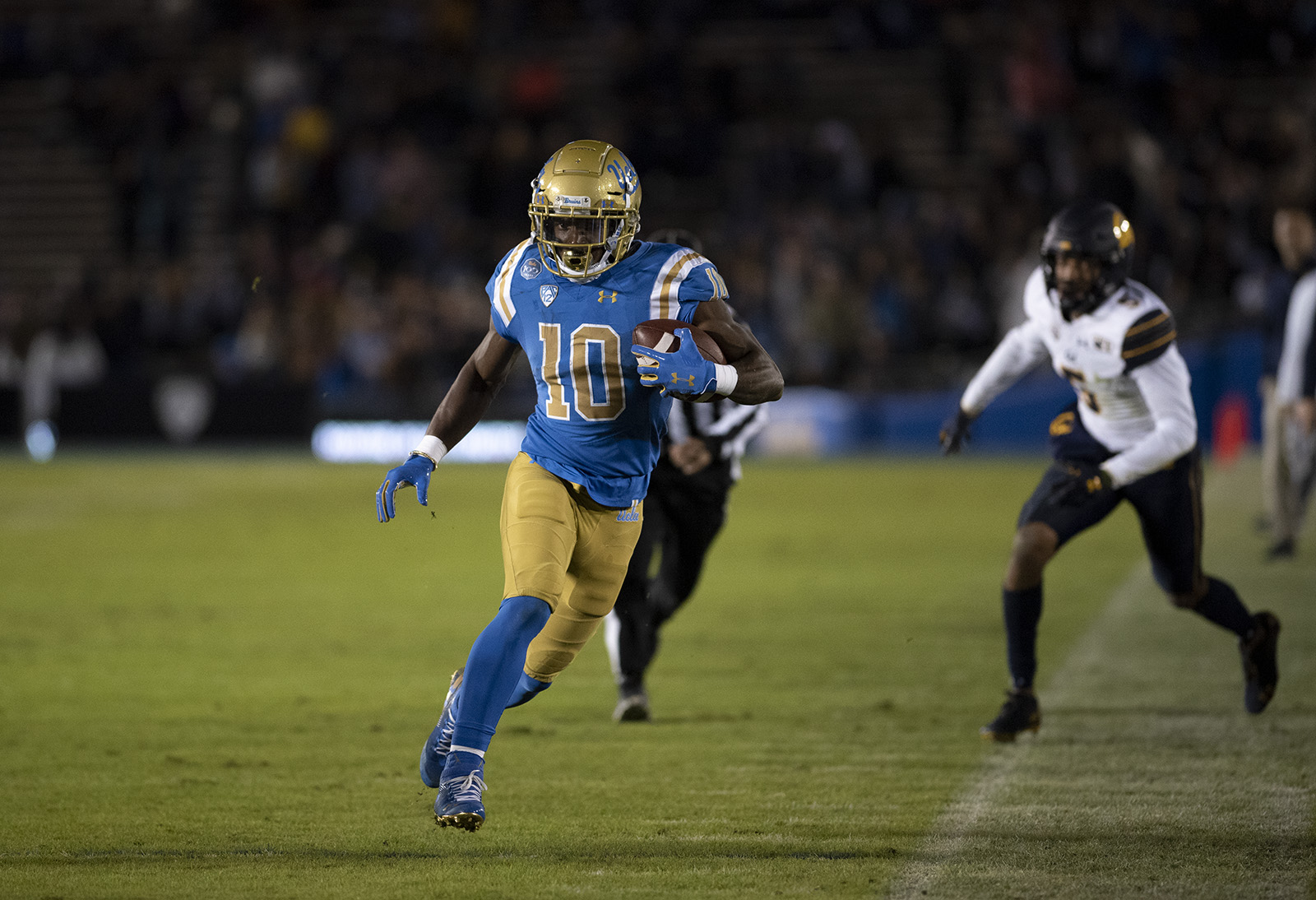