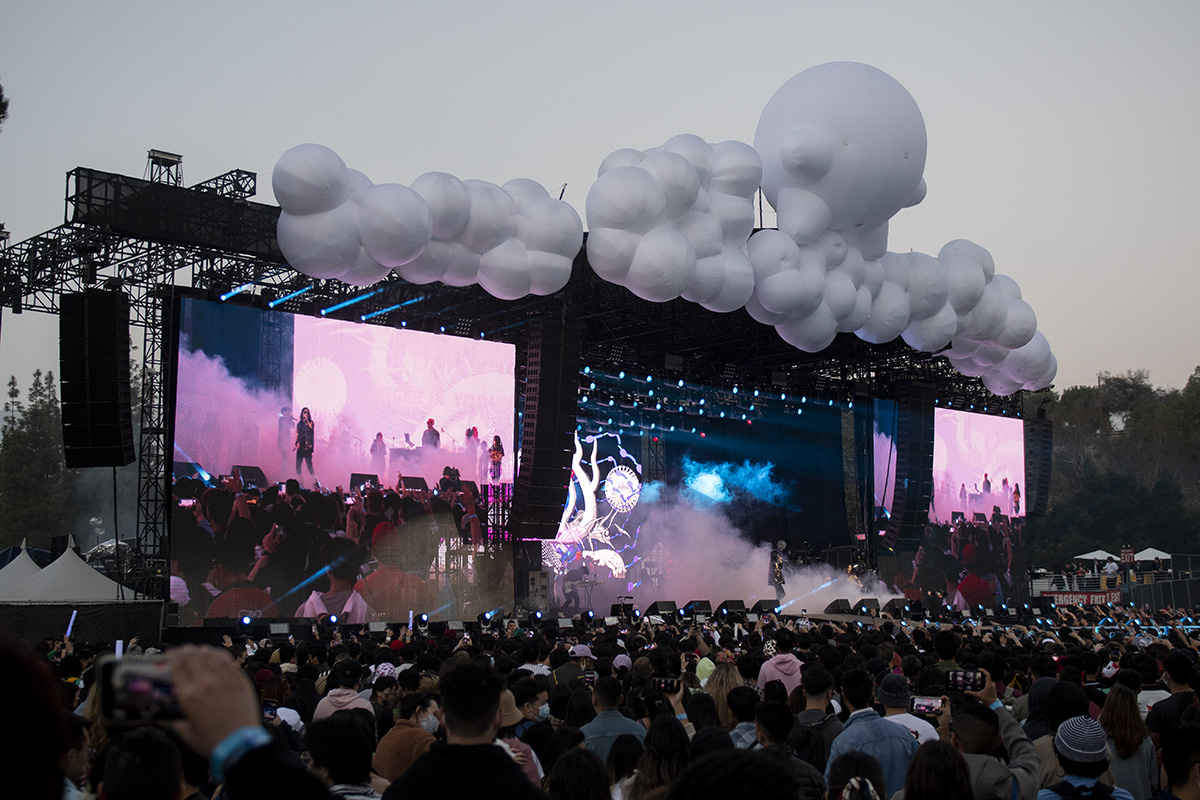 Pasadena’s Head In The Clouds Festival finished off its two-day stint with a bang, concluding with the likes of Guapdad 4000 and Joji. (Alex Driscoll/Daily Bruin staff)

The sky is the limit – and the clouds are only just the beginning.

Held on Saturday and Sunday, the Head In The Clouds Music and Arts festival showcased artists of Asian and Asian American heritage as they performed at Pasadena’s Brookside at the Rose Bowl. Featuring food vendors from San Gabriel’s 626 Night Market, the two-day festival organized by music collective 88rising rose to new heights.

Read on for the Daily Bruin’s coverage of day two of Head In The Clouds.

Turns out, the kids really are alright.

And The Linda Linda’s electrifying show is exactly what Head In The Clouds needed to prove it. The quartet, whose oldest member is 17, took the stage early in the night but played like they were headliners, opening with a cover of their namesake song, “Linda Linda” – a Japanese hit by The Blue Hearts.

Interspersed between covers were two frenetic songs that celebrated guitarist Bela Salazar’s two cats with punctuated, coordinated yells with punk-rock guitar and snappy drums played by 11-year-old Mila de la Garza. In only a few years, the teens have managed to go viral with their hit “Racist, Sexist Boy,” which laments the struggle of young Chinese students in America during the beginning of the pandemic.

Yet, the youth of their career was only apparent in the conversations they held with fans on stage, which they kept to a minimal “thank you,” and terse song introductions, as the band didn’t need conversation to fill their set time. Instead, their confidence as a group showed during head-banging tracks that stopped the sleek, R&B trend of the festival in its tracks.

Although the group played on the smaller of the two stages, crowds flocked to the group with a particularly devoted, head-banging set of fans in center stage, catching the attention of the quartet’s bassist. For many audience members, the group’s set ended all too soon, but regardless, the group kickstarted the night with the punky bang needed to invigorate a tired crowd.

The Linda Lindas serve to remind audience members what concerts are in their most quintessential form: raw, real and most certainly live.

Feel Ghood Music is here for a good time, not a long time.

BIBI and MFBTY, under the label Feel Ghood Music, took the 88 stage one after the other for a potent and action-packed 40-minute set.

BIBI opened her set by sharing her most sage advice to “always have a condom” before launching into her 2020 hit “쉬가릿 (cigarette and condom)” with a fluffy bag filled with the contraceptive to throw into fans’ hands.

The singer underwent various states of undress throughout the night as she flirted with fans by spilling water out the sides of her mouth and taking her voice to sensually soft registers for her R&B-pop fusion tracks. Whispering to the crowd did little to keep it quiet, as the audience screamed to hear more of her singing and witness her caress her body while on her knees in front of the live band.

The work of the stage seductress was far from done as she serenaded fans with “The Weekend” to finish her set, jumping off stage and kissing a fan on the mouth. While crowds appeared to be disappointed at her exit, they perked up at the prospect of Tiger JK, Yoon Mi-rae and Bizzy – a K-Pop group that debuted in 2013 – taking the stage.

Running onstage to the Squid Game viral hit, “Pink Soldiers” by 23, the group revitalized concertgoers with demands to put “hands up” and with some of the clearest guitar riffs of the night.

“Not a lot of people know who we are,” Tiger JK said. “It’s OK, but hopefully throughout the set we’ll get to know each other.”

Despite recognizing that “nobody knows (them),” and declaring that the group was too “old,” for the youthful concertgoers, the trio was well-received by the crowd, which welcomed their call-and-response requests to put finger guns in the air and scream.

“We were homeless before,” Tiger JK said. “The next song (came from a time when) we were full of depression. We were homeless. All we knew how to do was make music and so (we created ‘Angel’) that charted No. 1 in Korea. It might sound sappy, corny, cheesy but it’s true – we lived it. Y’all are angels to us.”

As fans requested “one more song,” the group played minutes past its official end time until LED screens went black and music was cut off altogether.

Because for Feel Ghood Music artists, it’s not a show unless you get kicked out.

Rap and EDM had permeated Head In The Clouds, but it was keshi who finally got crowds buzzing.

Likely heightened as a result of the eight recent deaths at Travis Scott’s Astroworld performance, security concerns with crowds being crushed at the front of the stage delayed keshi’s set by 10 minutes. That didn’t stop the falsetto singer from leading the crowd in a singalong to calm lo-fi-esque tracks that animated fans beyond what other acts could achieve throughout the night.

Despite a quiet mic that prevented fans from clearly hearing keshi’s quips and singing for the beginning part of his set – and especially during his latest release “SOMEBODY” – the singer still commanded the stage as he opened his arms to bask in the screams of passionate audience members.

Repeatedly removing his jacket and putting it back on throughout the set, keshi grabbed his guitar to perform “drunk,” the bass-heavy yet soulful lament for lonely drunks without their friends. Crowds were untamable during the set, screaming back at the singer’s gentle croons.

Winding down his set with “2 Soon,” a tapestry of a song that intricately weaves religious themes with trap beats, keshi flashed his middle finger to the audience while singing “Don’t matter if it fucks me up, the alcohol is not enough.” While melancholy lyrics flooded keshi’s songs, crowds stayed excited and fiery throughout the introspective set.

Guapdad 4000 is done with the “hokey pokey hand clapping” of earlier sets.

Catapulting onto stage with the cries of eagles and blasting of air horns, the rapper had crowds yelling “it’s a” and “check” in call-and-response fashion just before performing “Lil Scammer That Could.” Echoing the “Little Engine that Could,” Guapdad 4000 screamed “I think I can, I think I can” into the mic with minimal backtrack, whipping crowds into a frenzy regardless of the level of familiarity they had with his discography. Speaking in the third person, the performer asked the crowd for some validation.

The resounding cheers in response were answer enough for the rapper. Punctuating conversations with the crowd were various cash register sounds and horns that accompanied Guapdad 4000’s explanation of his financial struggles that led to writing “Iced Out Gold Chain,” and ultimately brought about his personal greed.

The bonafide capitalist took a break from the hyper tracks to shout out his Filipino ancestry and gift an “I love Adobo” shirt to a fan, much like he had to Rich Brian the day before. Impressed by the crowd’s energy as a product of his gift and setlist, Guapdad 4000 praised the audience before performing “Dragonball Durag – Remix.”

“I thought this was supposed to be the side stage, I didn’t know we was going to go out like that,” Guapdad 4000 said. “Alright, we got a show then.”

The rapper ended his set by nearly jumping into the crowd as he hugged fans while standing on barricades in every part of the crowd. Concertgoers pulled out their phones to take selfies with the performer, who spent the final minutes of his set giving photo-ops.

Because who ever said greed couldn’t be a little generous too? 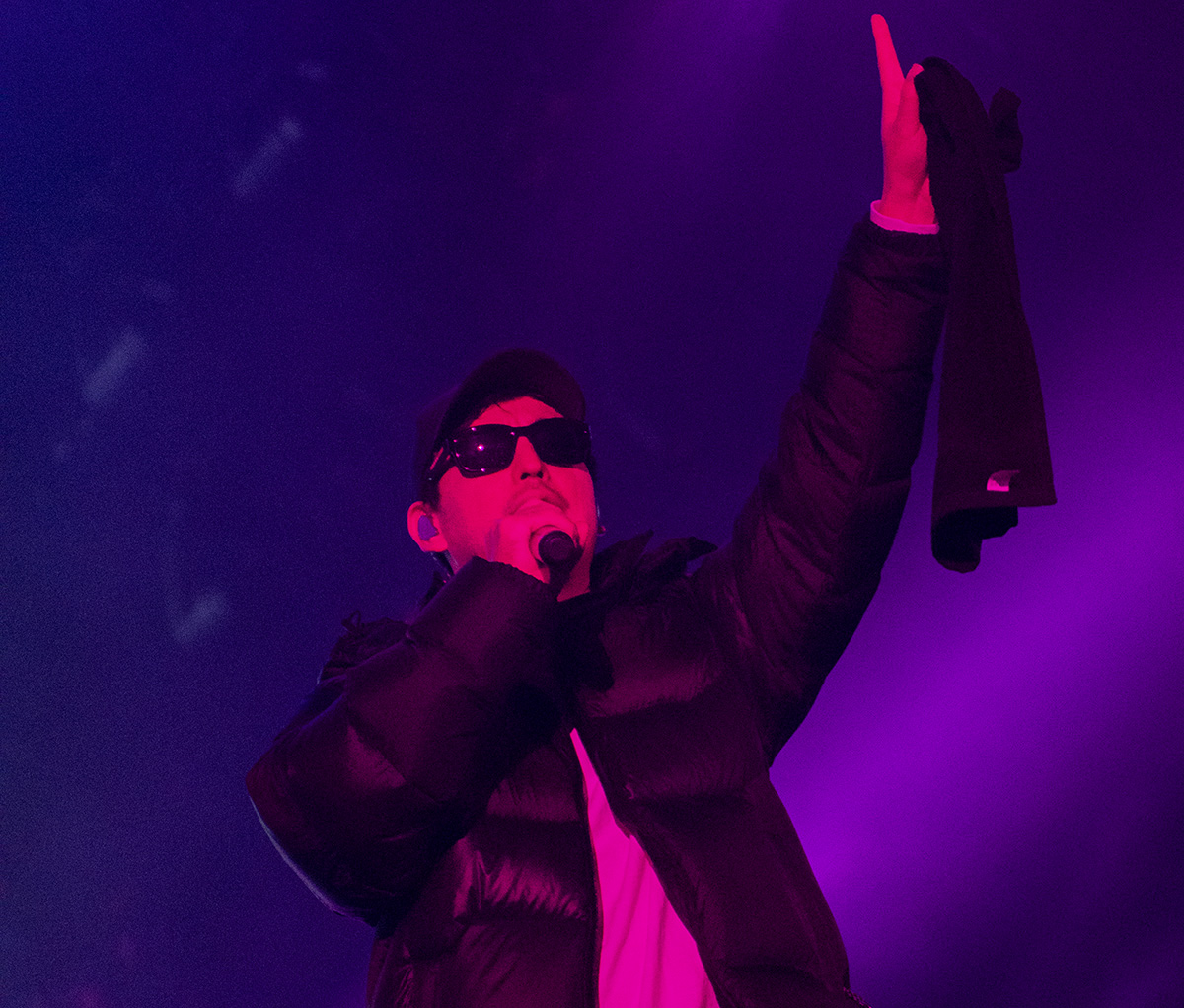 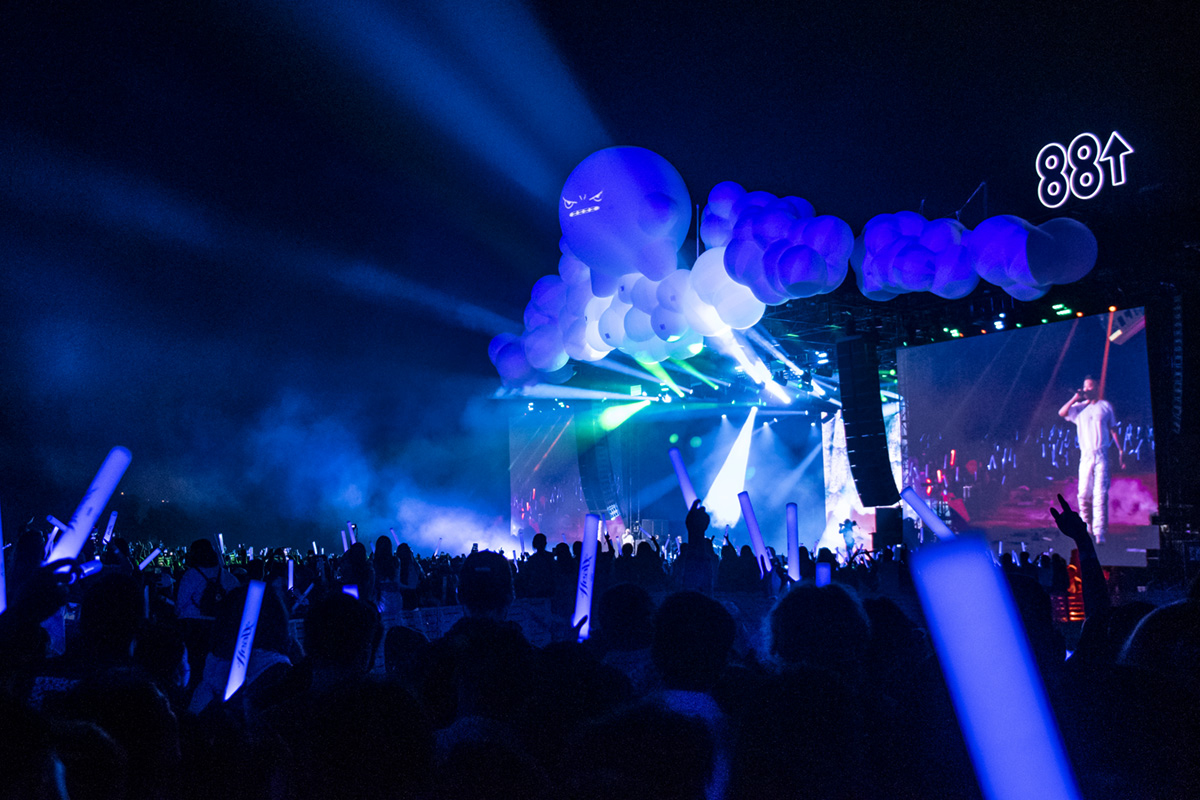 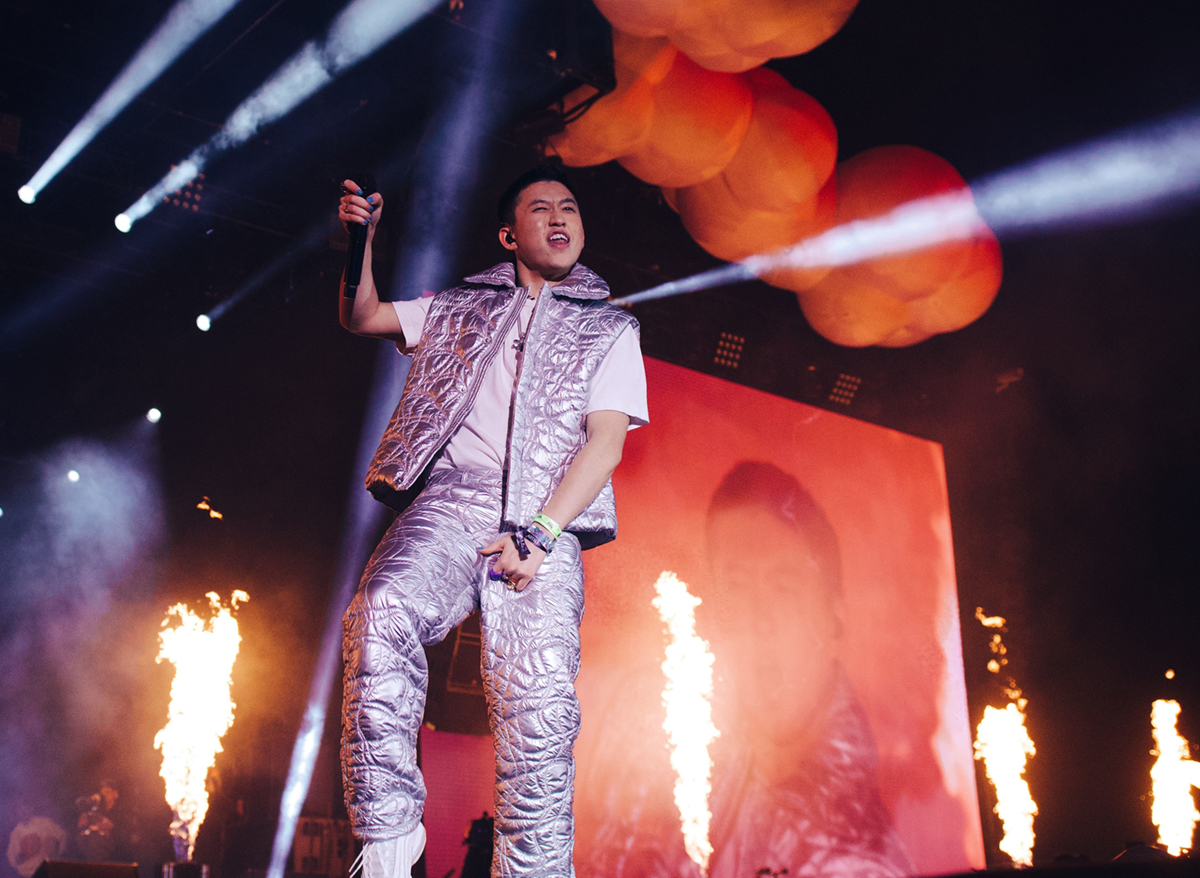 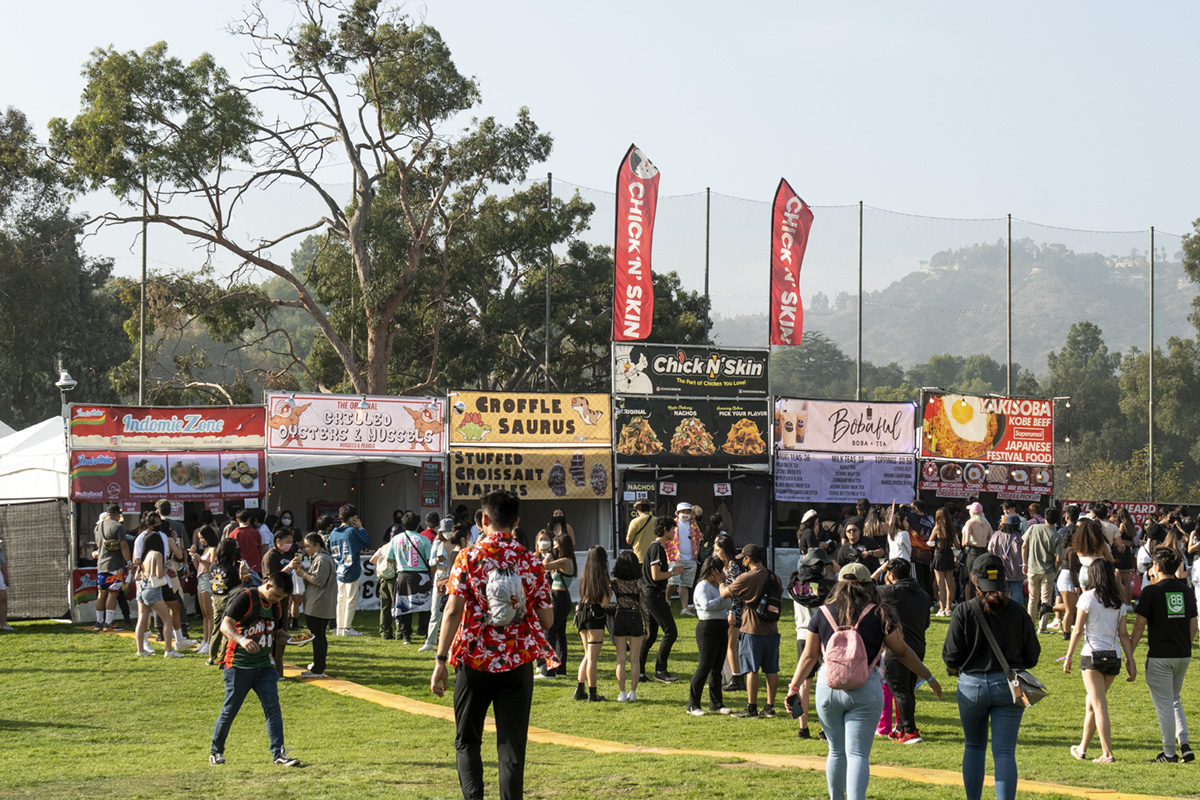