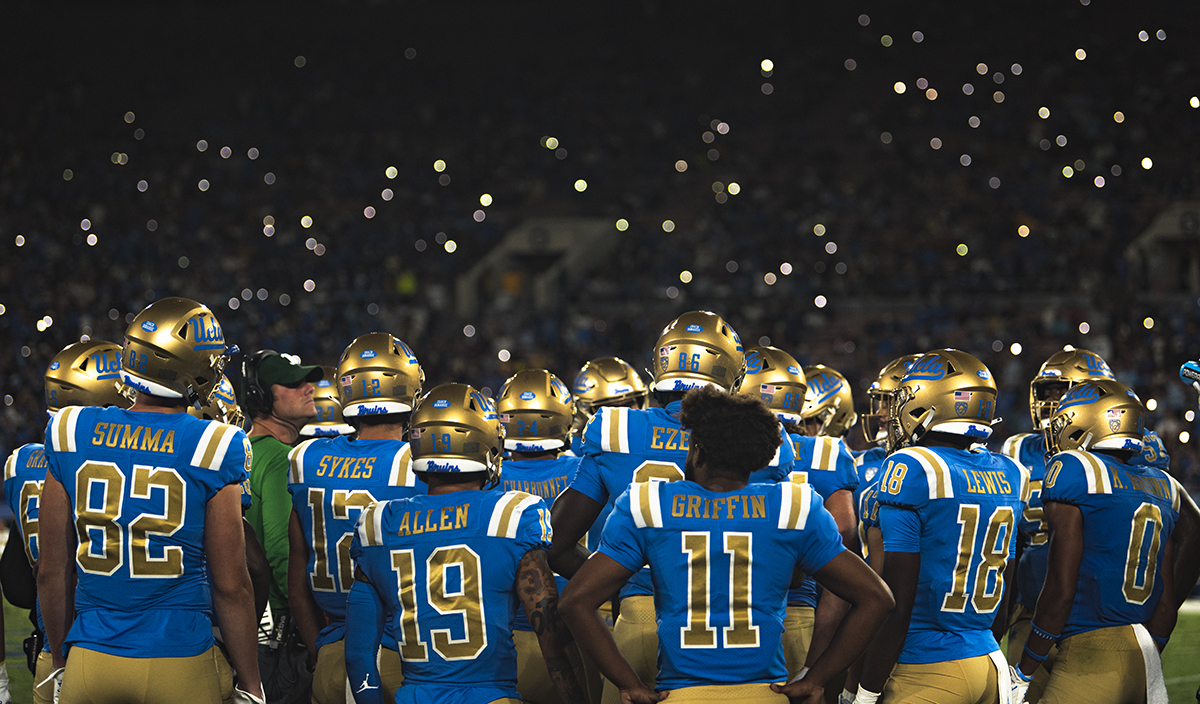 UCLA football fell to No. 22 Arizona State on Saturday, marking its most lopsided loss since 2019. The outcome also marked the Bruins’ first loss to the Sun Devils in nearly three years.(Kanishka Mehra/Daily Bruin senior staff)

Just a week after picking up its first road win of the season, UCLA football (3-2, 1-1 Pac-12) returned home with a 42-23 loss to No. 22 Arizona State (4-1, 2-0) at the Rose Bowl. The Bruins were within a point at halftime after a back-and-forth first half, but failed to score in the third and fourth quarters, giving them their worst loss of the last two seasons. Here are the five main takeaways from UCLA’s first fall to Arizona State since 2018.

Am I really starting this column with an Olivia Rodrigo song title? Yes.

Does it fit the mood? Absolutely.

Coming off its first road win of the season against a Stanford team that knocked off then-No. 3 Oregon on Saturday afternoon, UCLA was in prime position to build momentum both nationally and within the conference.

But after a significant stride for the first time in the coach Chip Kelly era, the Bruins have seemingly turned around and stumbled three paces backward with this loss.

The 19-point loss to Arizona State marked UCLA’s biggest defeat since losing 49-3 to Utah in November 2019. Saturday also marked the first time in two seasons that the Bruins lost by more than one possession, and the first Bruin loss to the Sun Devils since 2018.

The 42 points allowed by UCLA are the most it has given up to its opponent all season, while the zero points UCLA scored in the second half represented the first time the Bruins have been shut out in consecutive quarters.

You get the point. This was the Bruins’ worst performance of the season for a multitude of reasons. UCLA did not belong on that field Saturday night.

In what feels like a case of deja vu from previous seasons, the Bruins have once again disappointed after showing signs of momentum.


Of the 133 total plays ran Saturday night, one stands out as a microcosm of UCLA’s shortcomings.

Trailing by nine points early in the fourth quarter, the Bruins were facing a 4th-and-1 from the Arizona State 2-yard line.

A field goal would have brought the game back within one possession and given UCLA its first points of the second half.

But as he did five times Saturday, Kelly chose to go for it – and he made the right decision. The Bruins should have converted the fourth down.

Picking an inside zone option play – the same exact play UCLA ran the snap before – Kelly and the Bruins would have had the first down, and possibly even the touchdown, if senior quarterback Dorian Thompson-Robinson had handed it off to his 220-pound running back, junior Zach Charbonnet.

The only problem was that the ball was not in Charbonnet’s hands. Instead, Thompson-Robinson pulled the rock, tried to make something happen on the left side and ultimately lost a yard.

As he admitted in the postgame press conference, Thompson-Robinson made the wrong read, handing the ball back to the Sun Devils instead of Charbonnet and effectively ending the game.

In a night of questionable decision-making, the play exemplified the Bruins’ woeful Saturday night better than any other.

Over the past three years, Thompson-Robinson has made many errors through the air, with 20 interceptions between his freshman, sophomore and junior years. But so far this year, the quarterback’s problem has been on the ground.

The senior signal-caller took off 18 times Saturday – a career high in rushing attempts – and ended the game as the leading rusher for either team, with 93 yards.

Unlike the running backs behind him, very few of Thompson-Robinson’s yards came from designed runs. He often extended plays while trying to go around, through, and in one case, over, defenders to get the extra yard.

But while winding around defenders may make for a great show and lead to exciting numbers on the stat sheet, Thompson-Robinson’s decisions were not sound.

For starters, he needs to slide more often. A few extra yards for his total isn’t worth the numerous hits he took – especially for a quarterback that has missed time due to injury each of the last four seasons.

But instead, Thompson-Robinson attempted to make most of the plays with his legs – a decision that makes his stats look good, but is unsustainable in the long run.

Sometimes, it works out for them. Look at the LSU game, where UCLA blitzed early and often on young Tigers quarterback Max Johnson, forcing him to run for his life in just his third career start.

But sometimes, it doesn’t work out.

Often sending seven or eight bodies at Sun Devil quarterback Jayden Daniels on Saturday, the Bruins were trying to pressure the opposing quarterback as much as possible to get the ball out of his hands.

There were two problems with that strategy. For starters, Daniels is one of the most mobile quarterbacks in the country and has an innate ability to scramble around defenders and throw on the run. And secondly, the Bruins were down two starting safeties in senior defensive back Quentin Lake and redshirt junior defensive back Kenny Churchwell III, meaning all Daniels had to do was pick apart second-string defensive backs.

That led to a number of long plays from Daniels and the Sun Devils, who burned the Bruins for four passing plays of 45 yards or more.

When facing a quarterback as good as Daniels, sending pressure all game long does not work, especially when one is running out multiple backup defensive backs.

After the game, redshirt senior linebacker Jordan Genmark Heath said the strategy was a “gamble.” He’s right, but it’ll be a gamble that won’t pay off for the Bruins in the rest of the season.

Arizona State pulling off the upset as three-point underdogs was interesting, but that was just the tip of the iceberg.

The nonsensical day for the Pac-12 began when then-No. 3 Oregon lost to Stanford in overtime. Just a week prior, the Bruins took down the Cardinal by double digits.

But in perhaps the most surprising result of the weekend, Fresno State lost to Hawai’i. The same Bulldogs that beat the Bruins on the road lost to a Rainbow Warriors squad that began its season with a more than 30-point loss at the Rose Bowl.

In other words, college football is a weird place. 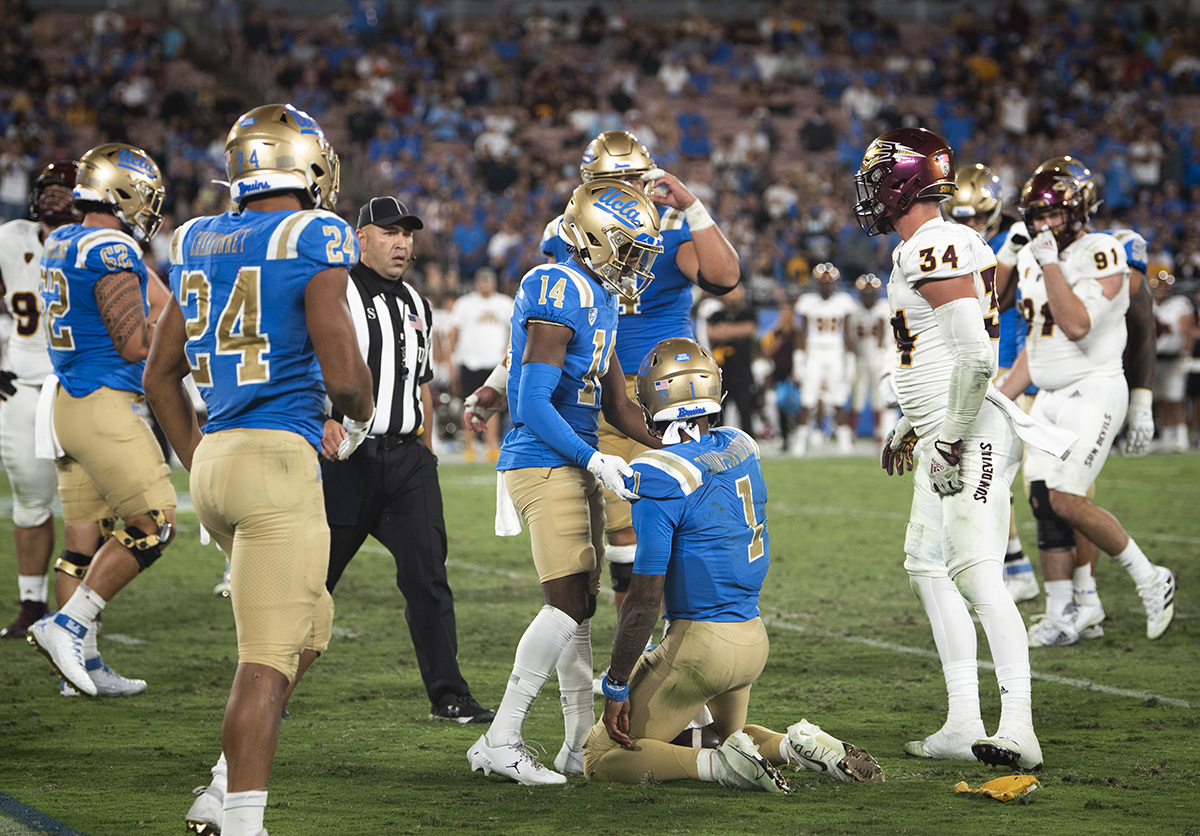