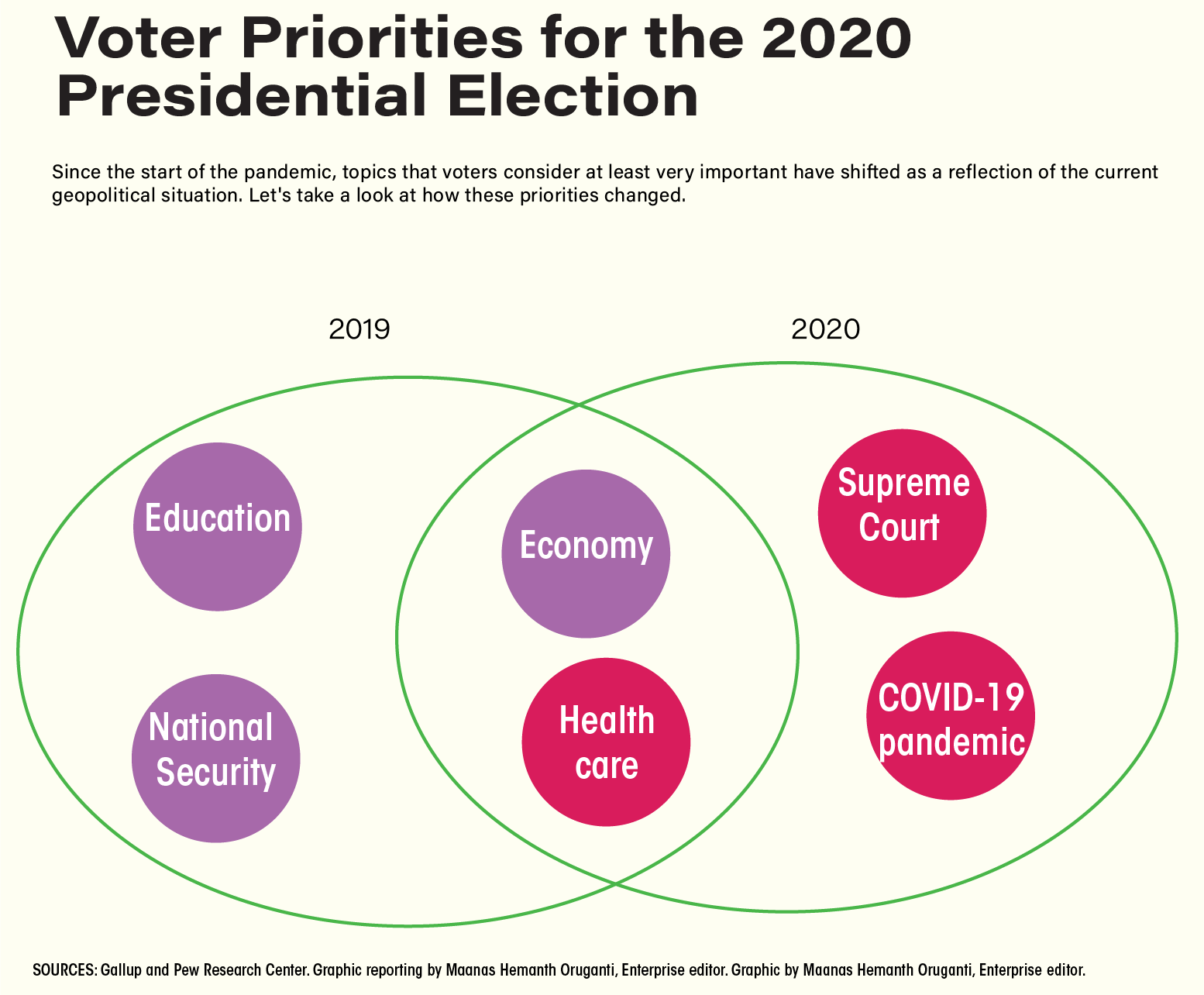 “I wanted to always play it down. I still like playing it down because I don’t want to create a panic.”

Those are the words President Donald Trump conveyed to Washington Post journalist Bob Woodward on March 19. In the following six months leading up to the 2020 election, more than seven million Americans would contract the coronavirus and over 200,000 would perish.

Now, Americans will head to the polls amid a major pandemic for the first time in a century. With the November elections fast approaching, Daily Bruin Enterprise reviewed Trump’s response to the coronavirus pandemic.

Disease control went from an unlisted voter priority in January 2020 to a top-four concern for Americans in a matter of eight months, according to public opinion surveys from Gallup and the Pew Research Center.

Eleven days later, the White House announced a ban on entry from China to prevent the spread of the coronavirus. However, around 40,000 Americans flew into the United States from China under exemptions in the order.

“It’s impossible to say how effective it was,” Katona said. “We probably had 10,000 cases already circulating in the United States. So a travel ban helps, but it helps if it’s done completely and it’s done early enough, and neither of those things happened.”

After implementing travel restrictions, a delay in testing prevented officials from determining the true number of infections in the U.S. The CDC first distributed diagnostic coronavirus tests to labs around the country Feb. 4, but a week later, the agency announced the kits were defective.

By March 30, roughly 831,000 Americans had been tested for the coronavirus. Not only did the raw number of screenings lag behind other countries, but the time it took to administer them also came too late, Katona said. A database compiled by The Atlantic shows 98% of those 831,000 tests took place after March 14, when the United States had already surpassed 2,800 cases.

Katona added that even though the United States’ raw testing numbers picked up considerably in the months following the original outbreaks, the initial delay in testing offset the nation’s ability to properly track and control infection rates.

“The most important thing is that you do a lot of testing and you do it as fast as possible,” Katona said. “The earlier you get on cases, the better. LA County has about 1,000 cases a day. How do you contact trace 1,000 new cases a day? It’s almost impossible.” 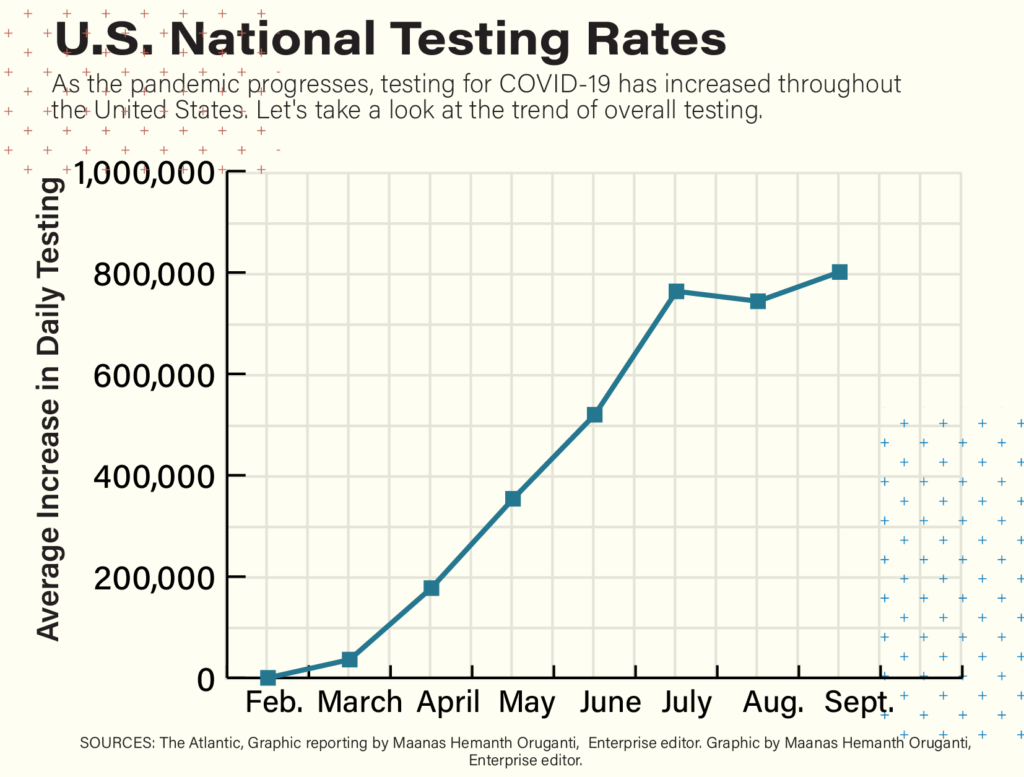 The CARES Act included the Paycheck Protection Program, a safety net for small businesses to keep employees from being permanently laid off. Such programs have been critical in minimizing the financial woes of the pandemic, according to Jerry Nickelsburg, director of the UCLA Anderson Forecast.

[Related link: The Quad: The Paycheck Protection Program and how it has affected Westwood businesses]

“Keeping individuals on the payroll will speed the recovery and also cushion the downturn,” Nickelsburg said. “As the company starts growing again, it will have employees that have continued service, so they don’t require any new training.”

Despite government relief packages, an estimated 100,000 small businesses closed within the first two months of the pandemic, according to a report from The Washington Post.

Prior to the pandemic, Westwood Village had already been suffering from a business vacancy rate of roughly 21%, according to several local politicians.

From March through August, Trump consistently advocated for using hydroxychloroquine as a COVID-19 treatment. The drug is an antimalarial medication that initially showed promise in nonrandomized trials. On March 28, the Food and Drug Administration issued an emergency use authorization for the treatment.

The rate at which people succumbed to COVID-19 prompted researchers to look for treatments that were readily available, such as hydroxychloroquine, said Judith Currier, chief of the UCLA Division of Infectious Diseases.

“People were dying, and so people were really looking for treatments,” Currier said. “It’s a drug that so far has not been shown to be effective, but studies were done that evaluated it and those were reasonable things to do.”

However, after ultimately deeming the drug as “likely ineffective” against treating the virus, the FDA revoked its emergency use authorization June 15.

With the election looming, the president recently hinted that a vaccine could be approved before Nov. 3. Robert Redfield, director of the CDC, quelled optimism of a rapid return to normalcy, telling Congress that a vaccine will likely be distributed in the second and third quarters of 2021.

For UCLA students eager to return to the classroom or enter the job market, that means uncertainty lies ahead. On Nov. 3, however, Bruins will have a chance to make their voices heard at the polls. Miguel Conste, a second-year physiological science major, says the pandemic has made him and his family much more enthusiastic to vote.

“It made me see how important health care is,” Conste said. “The pandemic has definitely changed our lifestyle and has shown us things I haven’t been able to see before. We want to voice our opinions.”