The Quad: Despite COVID-19, brunch culture in LA hasn’t become toast just yet 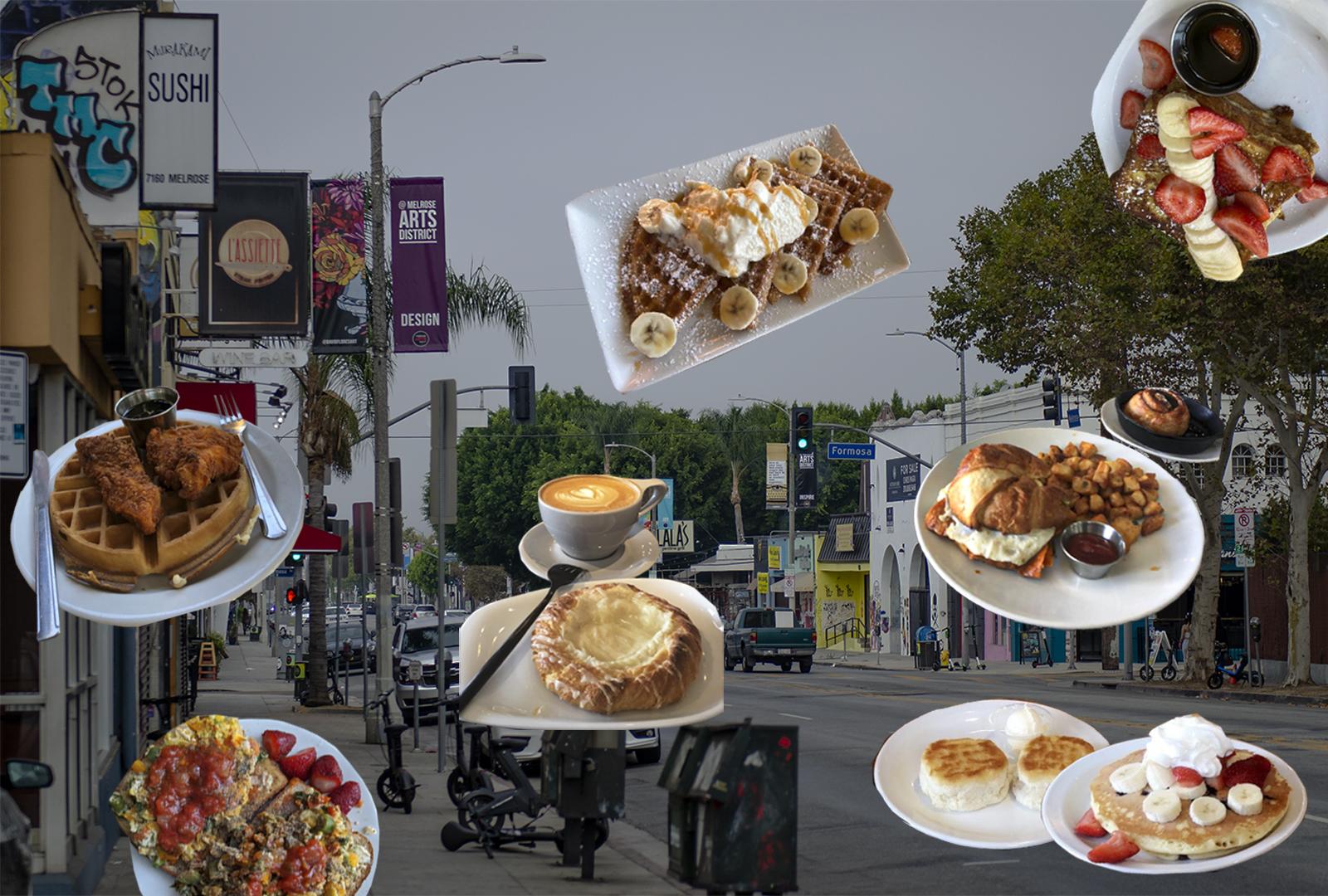 Many Angelenos have continued brunching amid the pandemic – with some key modifications. (Photo illustration by Kanishka Mehra/Photo editor)

By Kanishka Mehra and Audrey Pham

For many Los Angeles residents, the best part of the weekend is often a leisurely midday gathering featuring an amalgamation of food and drinks and socialization with loved ones. And the underlying motto of the occasion seems to be: pictures or it didn’t happen.

The word “brunch” first came about in print in 1895 when British writer Guy Beringer shared his idea of a light and energizing post-church meal that would be consumed instead of traditional Sunday evening feasts. The idea took off, and by the end of the 1920s, Beringer’s idea of brunch had come to the United States.

But a lot has changed since Beringer first proposed this harmonious marriage of breakfast and lunch.

As recent as the 1930s, women were discouraged from consuming alcohol at brunch but were expected to make drinks for the men present. Today, not only is every of-age person free to enjoy a mimosa or two, but brunch has also become a social media staple with a band of loyal followers that are quick to defend it.

Kiah Andrews, a fourth-year sociology major, said she got into brunch her freshman year.

“One of my favorite things about brunch is how each avocado toast, each omelet, each French toast or each latte can vary and be so different depending on which restaurant you go to,” Andrews said.

“I started to make a list of places I heard about, and it quickly got longer and longer,” Andrews added. “That’s when I made an Instagram for food in LA, @munchinnbrunchin.”

Andrews definitely isn’t the only one who is posting drool-inducing meals online, either. There seems to be no shortage of Instagram posts tagging #mimosasunday or featuring oversaturated photos of eggs Benedict.

It might be no surprise, then, that a lot of brunch’s allure stems from its association with celebrity and status.

Elizabeth Schiffler, a theater and performance studies graduate student and member of the food studies graduate program, said that the desire to eat French toast at the same restaurant as a social media influencer might just be the modern version of wanting to dine at the same place as Marilyn Monroe several decades ago.

“Our concept of celebrity or people in societal figures has just vastly expanded beyond what a Hollywood actor used to be,” Schiffler said. “We are much more intimately involved with the daily lives of influencers or celebrities that we see.”

Now, every meal is an opportunity for either an influencer to produce content showing what they’re eating or your average person to eat the same dish to feel connected to the celebrity, Schiffler said.

But beyond this, brunch is a time of the week in which family, friends and significant others can reunite after a long week.

And as naturally social creatures, human beings feed off the validation that comes with a highly socialized meal like brunch.

“Just about every hangout (is) centered around, ‘Let’s get brunch!’” Andrews said.

Of course, things are a bit different now that COVID-19 is here. In the first few weeks of the pandemic, search engine data revealed interest in “brunch” was at its lowest point in the past five years.

However, brunch has been able to adapt to the times. Nowadays, brunch is either enjoyed socially distanced at an outdoor restaurant or is cooked from the comfort of one’s own home with friends on Facetime.

Alumna Lindsey Karasawa, a facilitator at the Fielding School of Public Health’s COVID-19 Contact Tracing Virtual Academy and a member of the food studies graduate program, said that some people can actually brunch more regularly now, in part due to flexible remote-working schedules.

“If there is more remote working, there are probably less time-restrictions for when people have to be online, which will probably allow for mid-day recreational gatherings that may or may not include expensive sandwiches or mimosas,” Karasawa said.

Schiffler said LA’s existing brunch culture is facilitated by the unstructured work schedules of actors and creatives that existed even before the pandemic hit. This laidback work environment coupled with a strong celebrity culture and sunny year-round weather only helps make the city an even more ideal brunch destination, Schiffler added.

Additionally, in a time when the distinction between work and personal life is getting increasingly difficult to sustain, Karasawa said the young Angelenos flocking to brunch choose to invest in socialized meals because they desperately need to escape their home offices.

Unfortunately, the pandemic has left many people unemployed and sectors of the economy reeling – highlighting the potentially exclusionary nature of this notoriously expensive meal.

As a result, it might be time for brunch to turn over a new leaf.

Karasawa said current conditions might encourage brunchers to try cooking new recipes at home so they aren’t paying $20 for french toast in a restaurant.

“COVID has obviously pushed a lot of people to be creative with their pastimes or how they see people,” Karasawa said. “Not that everyone is choosing to stay home, but I think it could maybe open up more opportunities for people to express more of their own food interests in their brunch food.”

In fact, even the most avid brunchers are trying new options.

“Since (the COVID-19 pandemic), I have definitely cut back on brunch, but that hasn’t stopped me from supporting local restaurants by getting takeout and dining on patios,” Andrews said. “I have also explored making brunch myself.”

So, like most things, brunch culture has been impacted by the pandemic. But don’t fret – you can still post your mimosas and eggs benedicts – they just might have to be homemade or photographed on an outdoor patio.