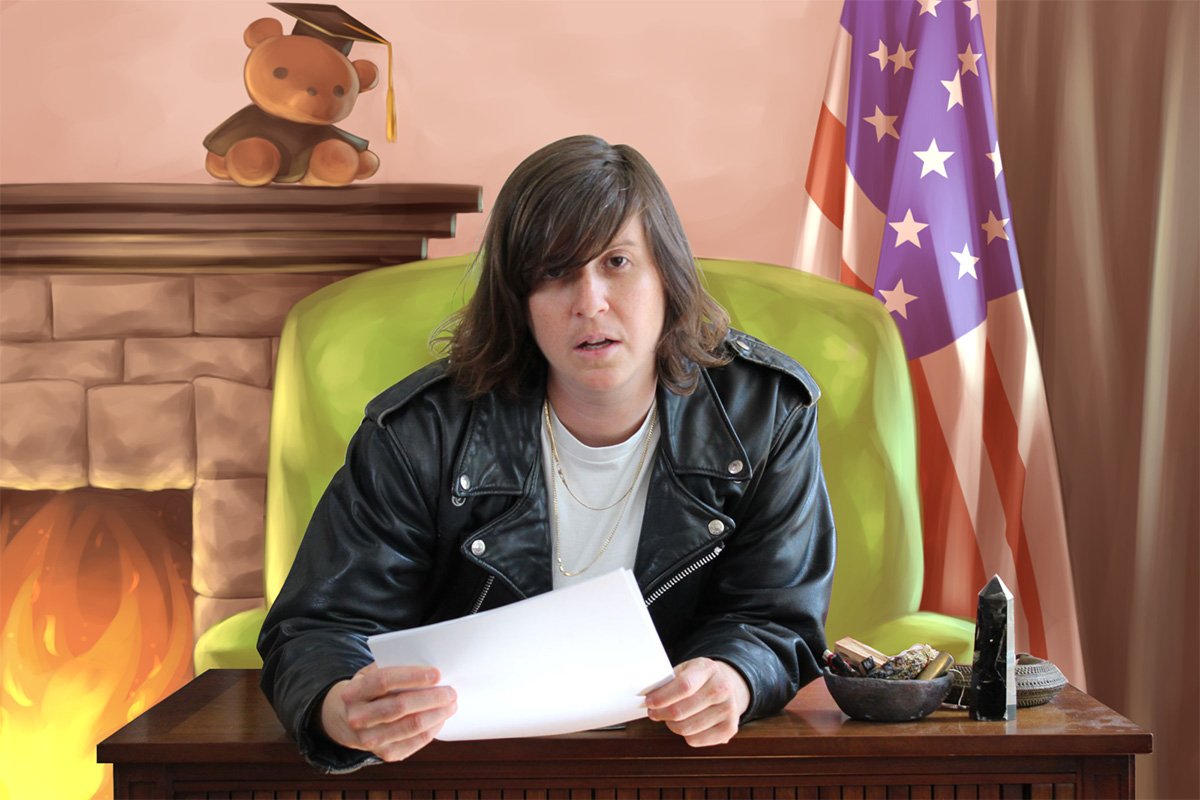 Artist Constance Hockaday’s series with the Center for the Art of Performance at UCLA, “Artists-in-Presidents: Fireside Chats for 2020,” reimagines Franklin D. Roosevelt’s famous fireside chats in anticipation of Election Day. In a role reversal, artists will be delivering a national address that answers the question: What can we put our faith in now? (Photo courtesy of Constance Hockaday, Photo Illustration by Nico Hy/Daily Bruin).

“State of the Union Redress”

On March 12, 1933, in the midst of economic depression and deep national divide, FDR urged American citizens to turn on their radios. For the first time in history, people virtually welcomed a national leader into their homes. He directly addressed Americans with words of hope and unity.

Nearly a century later, on a hunt for a ship to house her floating social club, Hockaday stumbled across the USS Potomac, the same vessel on which Roosevelt wrote and read some of his chats, according to Hockaday, tethered in the San Francisco Bay. Inspired by the historical implications of the ship, she said she began to imagine a reformatting of these fireside chats, one where national addresses would be given by citizens.

The incubation period of this project began in 2015, but Hockaday was unable to gain funding until this year, after partnering with the Center for the Art of Performance at UCLA. Having begun Sept. 18 and running through Nov. 13, CAP will share each artist’s “State of the Union Redress” video on its website, across social media and as a podcast.

“Our national narratives of liberation are pretty flawed,” Hockaday said. “They have excluded and erased the voices of indigenous people, women, Black people, brown people (and) those with disabilities. … If we’re going to get different kinds of people in power, we’ve got to start performing public leadership in a different way.”

The selection process for her project was a word-of-mouth whirlwind that Hockaday compared to the circulating of chain mail. She invited artists, who invited other artists, and soon she said she had well over 50 participants, a project manager and speech consultants. Hockaday said she tasked each individual with formulating a national address, on any topic, answering the question: What can we put our faith in now?

Performance artist Daniel Alexander Jones said he expresses the locus of his faith in two main themes that frame his address: exploring love’s place in a civic space and the implications of history reaching a potentially permanent end. A self-studied history buff, Jones said he was well versed in FDR’s fireside chats – from their impact to their national timing – and the similarities that could be drawn between Roosevelt’s administration and the current political landscape.

“When I heard about what the project was going to do in terms of exploding access (to the arts) and reimagining what the presidency – as a kind of mythic or archetypal space – could be and our understanding of it in this election year, … I was all in,” Jones said.

Although the idea of artists giving a political address may seem novel, Kristina Wong, a performance artist and elected official in the city of Los Angeles, said she has always worked in the spheres of politics and identity. When invited by Hockaday to pen and perform her own national address, Wong said she already had political and theatrical experience to draw upon, complete with a hand-sewn white pantsuit at the ready.

“I sometimes call myself a reluctant activist,” Wong said. “I think activism always looked like a very specific, un-fun thing, and for me as an artist, I was always trying to find ways to confront the contradictions, not capitalize on them.”

Wong said political shifts often result from the flames which they kindle. Popular culture can get people thinking about civil liberties that aren’t yet backed by law; the Black Lives Matter movement went from a social media hashtag to a presidential debate topic, and LGBTQ+ characters had a marked presence in television before they were allowed in the courthouse, she said. Culture moves faster than government bodies, Wong said, which opens the doors for artists to cultivate change.

Art’s function as a medium for change is a reality that Hockaday said she has also pondered on multiple occasions. She’s considered ditching the political reference to the somewhat controversial FDR multiple times, but reached the conclusion that ignoring the issue of his civic faults wouldn’t erase their existence. Despite their flaws, Hockaday said Roosevelt’s fireside chats caused a societal shift that was incredibly powerful.

“(The reference to FDR) wedded the project to all of the problems we have,” Hockaday said.”If we’re going to move forward and try to say something different, we’ll never be able to without being stuck to all this imperfect history.”

Imperfections aside, Jones said the original fireside chats stemmed from a desire to forge an intimate relationship with the nation, one that emphasized possibility, bravery and healing. All themes which, he said, are much needed at a time when the federal government’s discourse is one of division.

Hockaday said she hopes this project provides listeners with the brain space to consider the needs of the current political conversation and imagine what they would contribute if offered a presidential platform.

“It’s not that the crisis is new, it’s just that it’s more loud and more urgent, and that it’s the exact moment where there is the possibility for people to change,” Hockaday said. “It’s a moment of crisis and possibility – those two go hand in hand.”