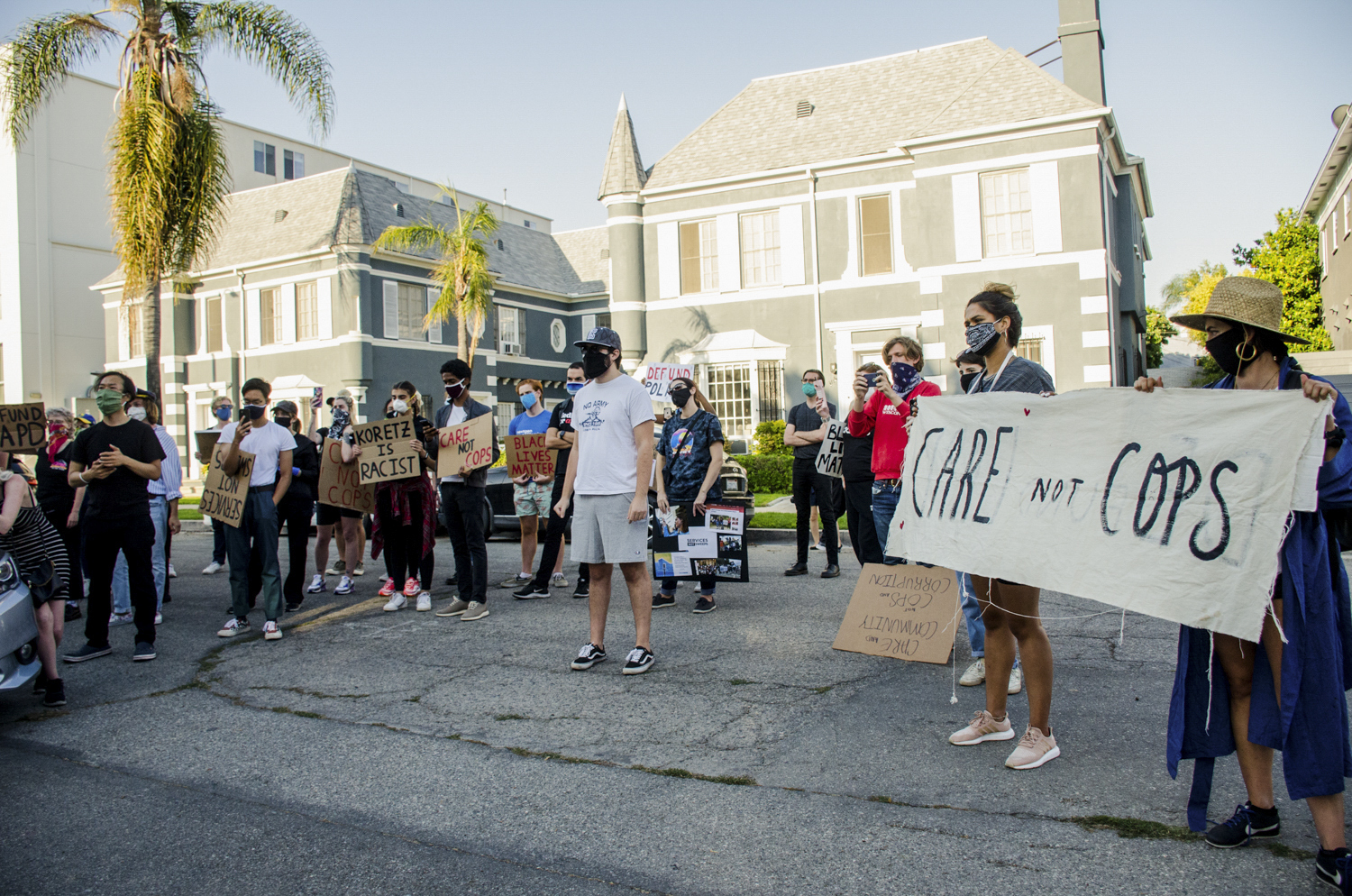 Protesters gathered in front of City Councilmember Paul Koretz’s Beverly Grove house to protest his vote against a proposal to identify parts of the LAPD budget to cut. (Kanishka Mehra/Photo editor)

By Justin Jung and Kanishka Mehra

This post was updated June 28 at 10:58 p.m. to reflect information about Paul Koretz’s June 22 vote in favor of cutting the LAPD budget and his vote in favor of increasing non-police emergency responders.

Dozens of students and community members gathered in front of a city councilmember’s house to advocate for increased local police budget cuts.

The LA City Council voted June 16 to identify parts of the Los Angeles Police Department budget to be cut, up to about $150 million.

However, Koretz was one of three council members who voted against the motion proposal, which ultimately passed June 16 in an 11-3 vote.

On June 22, a council subcommittee voted in favor of a proposal to cut about $133 million from the LAPD budget. Koretz joined three other Budget and Finance Committee members in voting 4-1 for the proposal.

The LA City Council and Mayor Eric Garcetti have until June 30 to approve the subcommittee’s budget proposal.

Demonstrators on foot and in cars gathered Saturday on King’s Road near Koretz’s house, chanting “Call out Koretz, quit your job,” and “Defund the police.”

Calls for budget cuts to police departments have risen nationwide following ongoing protests against police brutality and racial injustice, which began after a Minneapolis police officer killed George Floyd May 25.

The demonstrators gave speeches and called for cuts to the LAPD budget. Several passing cars also honked along to the protesters’ chants.

USAC organized the protest because Koretz voted against recommendations from the NWWNC and UCLA student leaders to reduce the LAPD budget, said Aidan Arasasingham, the USAC external vice president.

“There’s no greater reflection of our city’s values than its budget, and consistently Councilmember Koretz has voted for increases in police funding at the expense of vital services and support for residents,” said Arasasingham, a rising fourth-year global studies student.

The LAPD deployed several police officers and a police car in response to the protest.

Nicolas Emmons, a community organizer who attended the protest, said he hopes Koretz will reconsider his position on the police budget if community members continue to demonstrate.

The People’s Budget LA, a group of community organizations led by Black Lives Matter LA, called for steep cuts to the LAPD budget.

However, Koretz was one of three council members who voted against the budget proposal, which ultimately passed June 16 in an 11-3 vote.

Koretz did not immediately respond to requests for comment.

Garcetti agreed in early June to cut the LAPD budget by about $150 million and redirect up to $250 million of the city budget to community services.

Dressner Levy added that the police dispatches officers to emergency situations that officers are not qualified to respond to.

Koretz has not responded to this petition, said Nina Long, the USAC EVP chief of staff and a fourth-year public affairs student who attended the protest.

However, Hajee said organizing and protesting are effective in advocating for local change. There has been more progress on police reforms in the past three weeks than over the last several years, Hajee added.

“The power of communities coming together and demanding that change from their local representatives can go a really long way,” Hajee said.