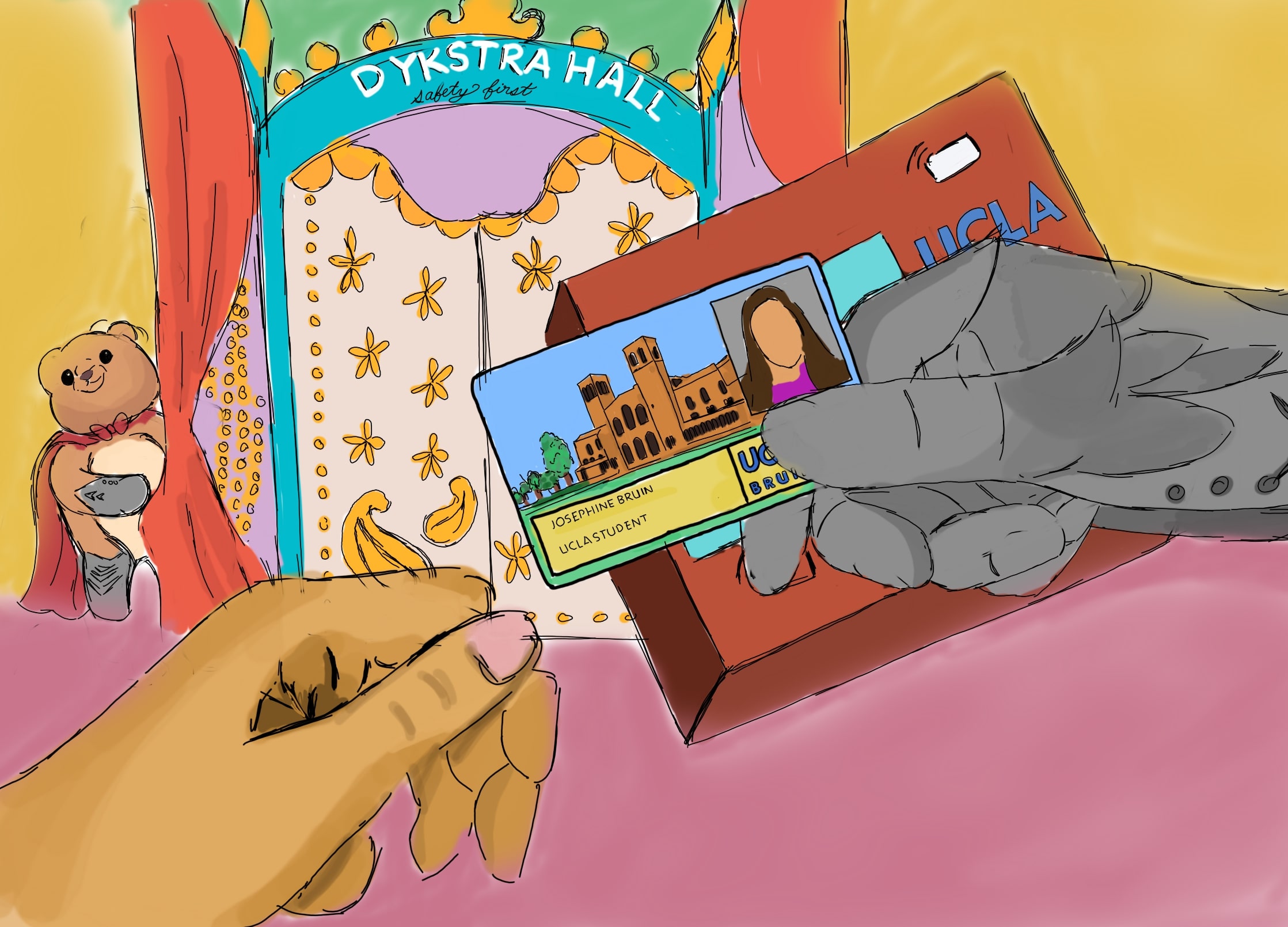 UCLA and the United States might have one major thing in common. Despite what other countries or universities may be doing to ensure the safety of their residents, they have failed to follow suit.

And the problem starts in the housing department.

It is not difficult to gain access to residential halls on the Hill. The only hours when students have an extra safety net are from 9 p.m. to 5 a.m., when there is Access Control. However, restricted hours are most needed during the day when students are on campus. If someone without a BruinCard wanted to enter any building, all they would have to do is wait long enough for a student to swipe their card.

It therefore comes as little surprise that in the span of just two weeks in October, there were three burglaries reported on the Hill, some during the day, with students in their dorms at the time. If burglars are able to enter dorms while students are present, it is safe to assume access into residence halls is far too easy.

The fact of the matter is the university’s current security measures do not protect students as well as it would like to believe. In return, students are paying the price for the university’s worrying reluctance to improve security on campus and on the Hill.

If UCLA Housing is attempting to keep students safe, it should add security beyond a simple ID card. The fact that dorm buildings are easily accessible is concerning given the number of alleged assaults on the Hill this year alone. UCLA must take these cases more seriously and implement measures that make Bruins safer, such as security cameras on individual floors. Because heightened security will be needed on a nearly empty campus, this is a golden opportunity for UCLA to implement more long-term Hill security once things go back to normal.

Because what it currently has is not enough.

“It is inaccurate to say that anyone can walk into residence halls,” UCLA Housing and Hospitality said in an emailed statement.

Yet despite this confidence, UCLA Housing still relies on external parties for students’ protection. The three-point BruinCard check process UCLA Housing claims keeps residents safe is easy to bypass if an outsider waits for someone with a BruinCard to provide them access. UCPD is heavily relied upon given its officers are on the Hill all hours of the day. A solution UCLA Housing is currently preparing is a new safety koban, a Japanese word for a small police station, outside the main entrance of Covel Commons. Initial staffing hours are expected to span 9 p.m. to 2 a.m. where people can use the koban as a source of information and a place to ask safety questions, report incidents, and initiate a report with UCPD.

“UCPD maintains a wonderful relationship with Residential Life,” UCLA Housing said. “UCPD has patrol officers working 24/7, and they are regularly patrolling the Hill and all UCLA Housing properties as part of their regular patrols of the UCLA campus and its surrounding areas.”

Then again, Jan. 28, two men allegedly assaulted two people with a handgun at Hitch Suites in broad daylight. As diligently as UCPD and UCLA might be working to ensure students’ safety, the new koban will only operate during the evening, even though many of these reported incidents are occurring during the day.

Grace Galey, a second-year global studies and political science student, said she is aware of the hesitancy residents might have if cameras were installed. However, she said she would feel safer if these safeguards were in place.

“My first year on the Hill, someone deadbolted their door and someone stole their laptops and all their belongings,” Galey said. “I absolutely think cameras in the halls would be so helpful.”

There are a number of ways UCLA Housing could go about making sure students feel safer, such as installing cameras in residential floors. Surveys could be sent out to students asking if they’d feel comfortable with this change. Alternatively, UCLA Housing could add cameras to certain buildings and provide students the option of living in them. A less intrusive option could be hiring Access Control all day.

And students have expressed an interest in having cameras installed given that if anything were to happen to them, they would be trapped in a classic case of he said, she said.

Nicole Durghalli, a fourth-year nursing student, said adding cameras to floors could be a second line of defense to the already implemented security.

“Buildings that would have cameras could add an extra level of security,” Durghalli said. “It wouldn’t hurt to add them in the hallways.”

Housing said cameras aren’t installed in individual floors out of respect for privacy. While this is a valid reason, implementing proper security measures isn’t just an issue of property theft. Unhindered access to dorm buildings can easily lead to sexual assault, which is not unheard of at UCLA. Assaults are difficult enough for students to report, and in the wake of recent changes to Title IX laws that provide more rights to the accused, survivors will have an even harder time.

UCLA must take immediate action to protect its students.

Because if the nation’s premier public university continues to disregard students’ safety, it will lead in another category.

But this time, it will be for the wrong reasons. 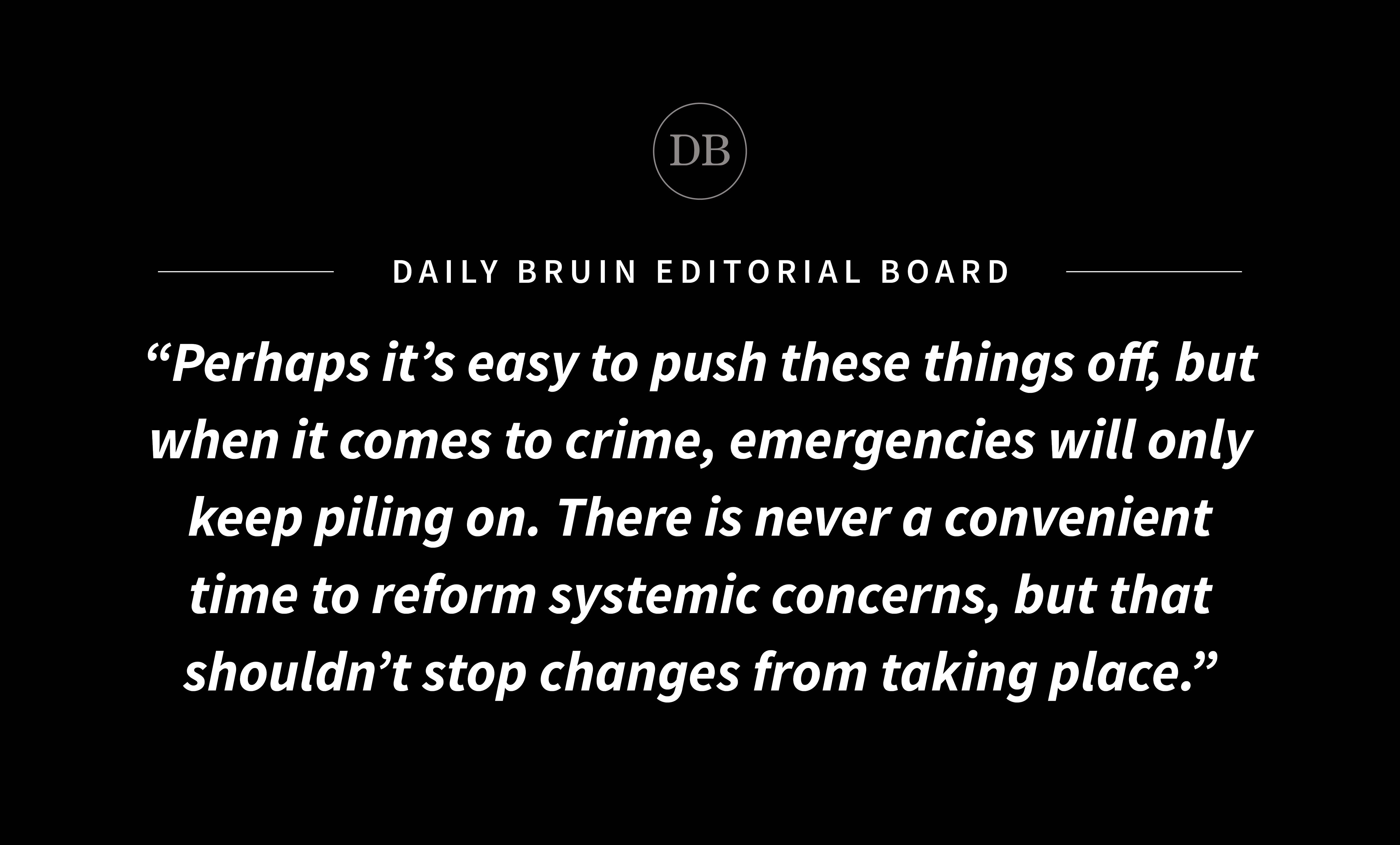 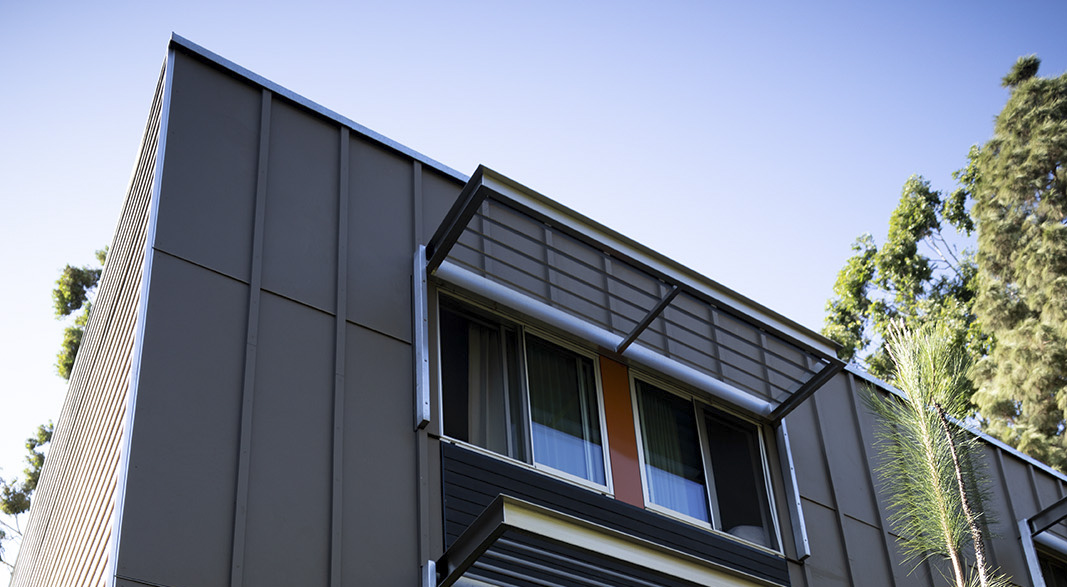 In light of burglaries, ensuring students’ safety on the Hill must be a priority