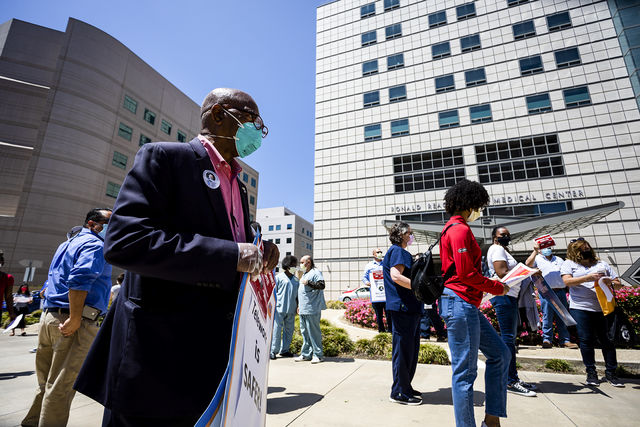 Usually a day for celebrating the working class, Angelenos across the political spectrum criticized the institutional handling of the coronavirus pandemic for being either too much or too little.

At Ronald Reagan UCLA Medical Center, about 70 nurses and other essential workers joined National Nurses United nurses at 138 hospitals across the country in demanding for better personal protective equipment. Teamsters Local 2010, which represents workers in higher education, also mourned an electrician who worked at the medical center but died of COVID-19, the disease caused by the novel coronavirus, in late April.

Marcia Santini, a registered nurse in the Emergency Department, helped organize the protest at UCLA on behalf of the California Nurses Union. Santini questioned the safety of disinfecting N95 masks for reuse and said she believes the federal government should step in and produce more masks.

“The intended use of an N95 mask is one mask per one patient for only a certain period of time or else it will start to break down,” Santini said. “The science behind sterilization has not convinced us that this is the right practice that should be in place. … We would never ever do this on a normal day.”

“Ultraviolet germicidal irradiation is a validated process used to kill viruses,” said UCLA Health in an emailed statement. “While UCLA Health has sufficient inventory to safely provide care during the pandemic, we recognize the importance of creative solutions to procure PPE supplies and extend their safe use.”

Most demonstrators at UCLA dispersed after a series of speeches, but some continued with a car protest, showering the hospital staff’s lunch break with a cacophony of car horns. Naghmeh Salami, a cytotechnologist in the Department of Pathology and Laboratory Medicine at the medical center, said she found the honking disrespectful.

“I have a break and I have to hear this?” said Salami, a member of the union University Professional and Technical Employees Communications Workers of America 9119. “Protesting and asking for PPEs and standing up for your employees who have lost their lives, that’s great. But this is not doing anything to help anyone, especially during this hard time.”

In Central Los Angeles, dozens of protesters with the L.A. Tenants Union congregated in front of LA Mayor Eric Garcetti’s house to demand rent cancellation as the pandemic has pushed Angelenos out of work and unable to pay rent. A police line kept the crowd, both on foot and in cars, away from the house.

The protesters shouted, “No rent, no evictions, no vacancies.”

Both the city and county of LA currently have rent relief measures in place, while the state has a moratorium on evictions as well as Project Roomkey, a statewide initiative which has been providing shelter in vacant hotel rooms to those experiencing homelessness.

“To that individual who is experiencing homeless who wants to go in: We have a room for you tonight, and we want to house you,” Garcetti said in his daily press briefing on Friday. “We want to make sure that anybody who is in danger of contracting COVID-19 knows that there is a place for them to put their head tonight.”

However, Angelenos who don’t pay rent now will have up to 12 months after the measures end to pay backlogged rent, while numerous hotels across the state have resisted from participating in Project Roomkey.

Mango Gwen, a fourth-year gender studies student at UCLA, joined the protest by Garcetti’s house. Gwen said they are seeking legal help against their landlord, who Gwen claims is trying to evict them despite a valid lease and the statewide moratorium.

“Queer and trans students who have gone to UCLA to be safe from our families … have to move back to them because of the crisis,” said Gwen, who is transgender and lives off campus.

However, the shouting and honking at Garcetti’s house fell mostly on the wrong ears – although Amy Wakeland, Garcetti’s wife, was home at the time, Garcetti himself was preparing for his daily press briefing at City Hall.

Instead, City Hall saw an entirely different protest: Hundreds gathered to demand an immediate end to stay-at-home orders in California.

Multiple different crowds came to express their discontent: laborers asking to get back the jobs they lost because of the pandemic and right-wing activists denouncing Garcetti and California Gov. Gavin Newsom for their strict coronavirus containment measures. A few others present showed support for the stay-at-home orders.

However, unlike the previous drive-in protest at Civic Center on April 23, many protesters flaunted the government’s social distancing and face-covering guidelines, tightly packing City Hall.

Similar May Day protests against Newsom occurred across California, notably at the state capitol in Sacramento where California Highway Patrol officers arrested 32 demonstrators. No protesters were arrested at City Hall, according to the Los Angeles Police Department.

Newsom announced at Friday’s daily press briefing that California is “days, not weeks” away from gradually lifting restrictions, just as the protests were reaching their peaks around noon.

“We’re getting very close to making really meaningful augmentations to that stay-at-home order,” said Newsom, hinting at new guidelines around protective equipment for the broader public.

Newsom announced Monday that California has contained the coronavirus pandemic well enough to start reopening some retail businesses beginning May 8.

However, Garcetti said lifting restrictions before the countywide “safer-at-home” order ends May 15 is unlikely since the number of COVID-19 patients in LA County continues to grow every week.

“(If) the doors fly wide open, that would kill so many people in this county,” Garcetti said. “If we don’t do this the right way, all the progress we fought for, all the time we spent at home would be for nothing.”

Instead, the decision to reopen will be a dynamic one based on the current situation. In the meantime, Garcetti urged people to abide by public health guidelines, keep distance from others and wear face coverings as they protest.