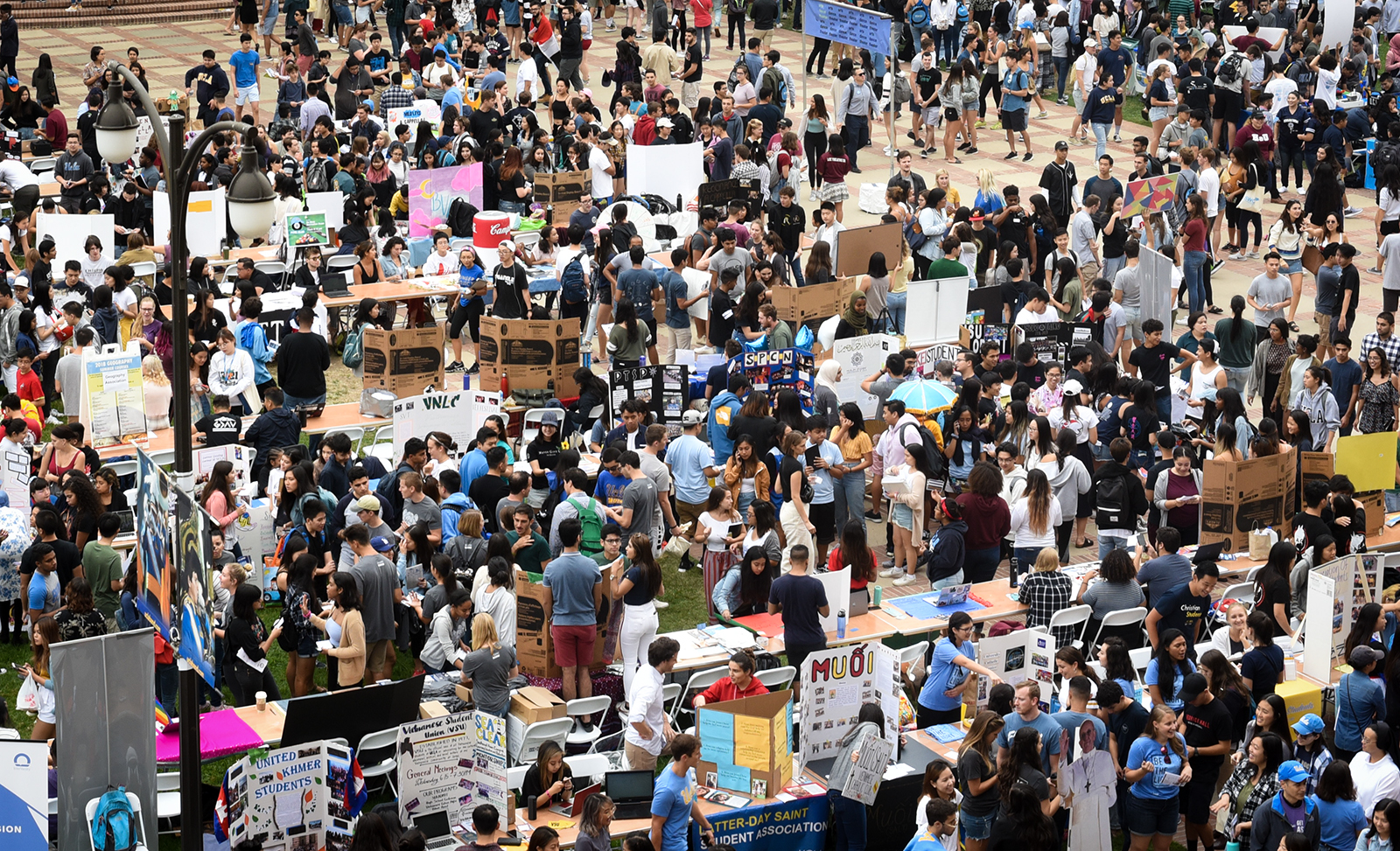 As UCLA transitioned to online forums, clubs and student organizations also had to change their engagement methods, transition traditions and end of the year projects. (Daily Bruin file photo)

Emily Luong, president of the Undergraduate Communication Association, felt she was dragged into a hole of anxiety and panic upon discovering spring quarter would be moved to online.

“I kind of panicked … when spring quarter (moved) online because I assumed that everything was over,” said Luong, a third-year communication student.

Student organizations face newfound struggles as a result of the transition to remote instruction for spring quarter in light of the novel coronavirus outbreak.

Luong’s club, UCA, provides workshops and resources to help students prepare for a career in communications. While the club did not dissolve, it had to call off its chief networking event after UCLA canceled all nonessential campus events in response to the novel coronavirus.

Other clubs also had their spring quarter plans changed because of UCLA’s mandate.

The Pediatric AIDS Coalition at UCLA usually hosts events to celebrate members’ yearlong work in the spring, but because of current circumstances it could not give its members the typical in-person celebration, said Sophie Ahmad, president of the organization.

“(I) just kind of (feel) bad almost for everyone having to dedicate so much time and energy and then not really getting the whole celebratory aspect of it,” said Ahmad, a fourth-year neuroscience and Spanish student.

Ahmad said they are currently figuring out what they can offer their members in place of celebrating together in person.

Yukta Trivedi, co-president of the Photography Club at UCLA, said it planned to organize a photo gallery for its members to present their best photos in the Kerckhoff Art Gallery before the UCLA mandate, which would have been its first showcase event after the club was revived last year.

Additionally, the club canceled its weekly outings to photograph places around Los Angeles, which is a major component of the club, said Trivedi, a third-year business economics student.

To address the cancellation of its weekly outings and photo gallery, the club has been putting out weekly indoor photo challenges for members to do, and club leaders are considering creating a magazine or scrapbook to highlight members’ best photos, Trivedi said.

Several club leaders said maintaining a connection with members was an issue.

“One of the biggest questions that I had … (was) how do we keep everybody still engaged and feel a part of the club?” Samantha Chandra, president of 180 Degrees Consulting at UCLA.

Some clubs struggled with electing or training leaders.

Jonathan Sung, president of the Korean American Student Association, said his club was concerned with ensuring a full election cycle to appoint new leaders. Sung added they are working on maintaining engagement with members and issuing club T-shirts to their members.

Chandra, a fourth-year business economics student, said her club had issues moving its election online because election season is normally the time for members to bond over the future of the club and raise club spirit.

“Having elections be online is very demoralizing … because election is usually when everyone comes together,” Chandra said.

UCA already elected its leaders during winter quarter, so they struggled with brainstorming ideas for how to train the incoming leadership, Luong said.

Every registered campus organization is assigned a SOLE advisor to help guide them, and SOLE recommended registered clubs reach out to their advisors in an email at the beginning of spring quarter.

Clubs varied in their approach to solving their respective problems. Some used their SOLE advisor for guidance.

UCA resolved its issues through some creativity and a consultation with its SOLE advisor, Michael Gamez, who helped the club brainstorm different virtual events.

UCA now plans to hold webinars to teach incoming board members their responsibilities and practice common situations that the board faces. Luong said the process made the outgoing board more hopeful.

“We started at … 50% but (now) it’s up to 85% in terms of morale,” Luong said. “We’re still very disappointed, you know obviously, that we can’t have the events we were planning to have, but … we’re feeling a little bit better.”

Ahmad said her club frequently contacted its SOLE advisor Pamela Cysner prior to remote instruction, and Cysner continued to be a reliable resource for guidance and support during the transition. For instance, when it came to moving Dance Marathon online, Cysner gave her full support by expressing her trust in their abilities, Ahmad said.

“We knew … someone from UCLA was on our side,” Ahmad said.

Ahmad added she spoke to other organizations to learn how their groups were adapting to the new circumstance and maintaining engagement with members.

PAC has been doing a variety of events and activities for members to stay connected with the club. It has created recommendation documents for members to list their favorite music and movies, and members also participated in a PAC-themed cake-baking competition, Ahmad said.

“I have a better chance of figuring out what to do by talking to other student leaders and … talking to other 180DC branches,” Chandra said. “I don’t know if SOLE is going to be able to give me that insight, especially because they are adults and they don’t live in the student world.”

The Photography Club also did not consult its SOLE advisor. Trivedi said they are more of a relaxed and casual club, so they have not had any problems pressing enough to call their advisor.

KASA figured out how it would turnover current staff to next year’s staff and plans on helping its incoming leaders transition to their roles digitally, said Sung, a third-year economics student.

They are also using various communication outlets to maintain engagement with members, such as their Facebook page, Slack, Discord and more, Sung said.

Although KASA does not heavily depend on SOLE, Sung said he thinks SOLE could have provided more resources to help their members adjust to the transition, instead of having organizations independently seek out more individualized help through their SOLE advisor.

Receiving such updates would have helped the board keep KASA members in the loop, especially at the beginning of the transition to remote instruction, Sung said.

SOLE could also have been more personal with its help, Ahmad said.

“The emails I’ve been getting for the most part that are on behalf of the SOLE office have been like, ‘Dear Signatories,’ … where I’m like ‘OK, no, this is a mass email I’m getting,’” Ahmad said. “It doesn’t want me to click on that email specifically.”

Ahmad said the emails could have been catered to clubs and addressed concerns they might have because of the transition.

SOLE Director Mike Cohn said SOLE is doing its best to provide resources for organizations to cope with the new circumstances.

Organizations can use Zoom Pro accounts, which are provided to all UCLA students, to host meetings of up to 100 participants for up to 24 hours. One-on-one meetings on Zoom do not have time limits.

SOLE also suggested organizations take advantage of Google Meet, now free until Sept. 30, with features such as meetings with a 250-participant maximum, livestreaming for 100,000 viewers per domain and the option to record meetings and save those recordings on Google Drive.

SOLE will also be sending out newsletters, which will include resources and suggestions for engagement, to signatories to help their organization adjust to the transition, Cohn said.

“This is brand new,” Cohn said. “We’re putting together things that are happening around the country that are (of) value … we’re thinking of new ideas. I meet with the staff regularly and we’re going to continue to put out more and more information in our newsletters.”