The Quad: A look at how the coronavirus pandemic disproportionately affects certain communities 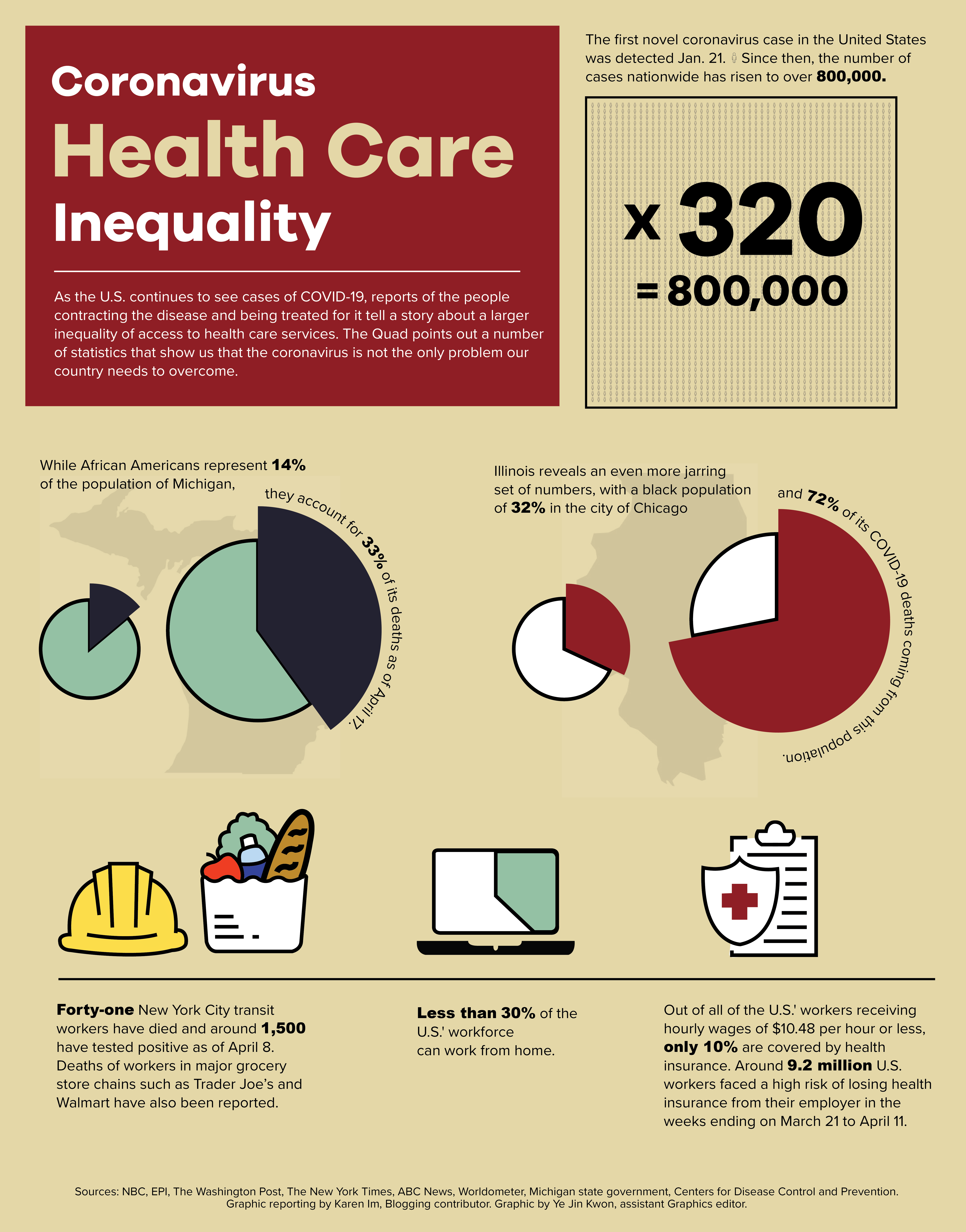 The novel coronavirus does not discriminate in its victims – but the American experience with this virus is divided depending on the circumstances of each individual.

As the coronavirus traverses the United States, it simultaneously bares and intensifies the deep divisions within the nation, meaning America’s most socioeconomically vulnerable populations may be left to bear the brunt of the calamity.

For example, individual state reports reveal the disproportionate toll the virus seems to be taking on African American populations.

While African Americans represent only 14% of the population of Michigan, they account for 33% of coronavirus deaths as of April 17. Illinois reveals an even more jarring set of numbers: Chicago has a black population of 32%, and 72% of the city’s COVID-19 deaths come from this population.

These numbers are no mere coincidence – in a nation where racial identification and socioeconomic status are inextricably related, a disaster seems to exacerbate preexisting inequalities that have historically marginalized low-income populations and people of color.

Since the first detected novel coronavirus case in the U.S. on Jan. 21, the number of cases nationwide has risen to over 800,000. As the U.S. struggles to keep the onslaught of COVID-19 cases at bay, an increasing number of states have implemented official stay-at-home orders in an attempt to alleviate the overwhelmed health care system.

These orders are deemed critical guidelines all Americans must follow to ensure their safety, but not every American can partake in extensive periods of social distancing at home.

For instance, one must have enough space to reap the protective benefits of isolation in the first place – this is a discrepancy that has wreaked havoc on New York City’s public housing system and its tenants.

With the city’s shortage of affordable housing, many low-income New Yorkers find themselves living in small, cramped apartments. During this pandemic, many residents are seeing the alarming health risks and challenges with crowding that come with cheaper housing.

According to Politico, many of the tenants living in the apartments under the New York City Housing Authority are frontline workers during this crisis who come back home from work to tight living conditions.

Low-wage workers are particularly vulnerable to being positioned in front of difficult decisions with very limited fiscal flexibility: Go to work and potentially get infected or stay at home and risk starvation.

In a country where this vulnerability intersects with poverty and race, lower-wage, lower-income households that are less likely to have savings to fall back on tend to be disproportionately black and Latino households, according to Vox.

Data collected by the U.S. Bureau of Labor Statistics show less than 30% of American workers can work from home. According to the Economic Policy Institute, the racial and ethnic breakdown of this data reveals large imbalances, with less than one in five black workers and approximately one in six Hispanic workers able to work from home.

The impact of COVID-19 on the American workforce has shed a light on the particularly hard-hit low-wage workers of color.

Nadereh Pourat, a professor-in-residence at the UCLA Fielding School of Public Health and adjunct professor at the UCLA School of Dentistry, said the workforce in service industries and retail businesses are dramatically impacted because of an inability to operate through online interfaces.

“Restaurants and stores are unable to operate in the same way they did before, so the workers in these businesses are either laid off or their jobs are severely restricted,” Pourat said.

In addition, the workers who face the highest risk of termination are often the same individuals who cannot afford to forgo income for an extended period of time.

According to the U.S. Department of Labor, more than 6.6 million Americans filed for unemployment benefits in the past week.

While those with enough amassed wealth are able to maintain the same standard of living during lockdown, some blue-collar and low-income workers grapple with a ticking time bomb as they struggle to obtain basic necessities and go about their day to day.

Staying home is a luxury not everyone can afford, and we see the people who are the least able to cope with the repercussions of this virus having to go to work, Pourat said.

With the running of essential businesses, low-wage workers have increasingly become the backbone of a functioning society, working around the clock to deliver packages, restock grocery store shelves and clean the streets.

The “unskilled” jobs that are positioned on the frontlines of sustaining society’s basic necessities during this health crisis are also the ones that are paid the least and oftentimes not given the necessary protection they need to work.

According to The New York Times, 41 New York City transit workers have died and around 1,500 have tested positive as of April 8. Likewise, The Washington Post has reported the deaths of workers at major grocery store chains such as Trader Joe’s and Walmart.

[Related: Los Angeles expands COVID-19 testing to all essential workers, regardless of symptoms]

While these workers face high exposure to the virus on a daily basis, many still face barriers to accessing proper health care in the case of coronavirus contraction.

The COVID-19 pandemic has also revealed a series of disparities within the health care system, starting with testing.

Some states require individuals be referred by a primary care physician in order to be tested – a referral that people of color may be less likely to receive. According to an Economic Policy Institute analysis, only roughly 10% of workers earning $10.48 or less an hour have health insurance.

Similarly, the undocumented immigrant population in the U.S. is a primary example of the risk that can be undertaken when there is no social safety net present for lost jobs.

Unable to receive federal help such as the economic impact payment, which provides up to $1,200 per individual, undocumented immigrants face an economic burden that cannot be alleviated with subsidized support.

A large majority of the undocumented population do not have the cost protection of health insurance, so if they contract the coronavirus and must be hospitalized, they could be liable for charges they are not able to afford, Pourat said.

Moreover, the fear of being identified by immigration enforcement continues to hang over the heads of undocumented individuals. Despite the U.S. Immigration and Customs Enforcement stating its refrainment from operating near medical facilities during this time, the agency’s track record hardly alleviates concerns of deportation.

“We have people that might be infected, but aren’t getting tested due to this worry and fear,” Pourat said. “So there’s this ripple effect of having policies that don’t really work well for the overall public health and well-being of everyone – and then us feeling the dire consequences of this as a society.”

While officials and the general public scramble to pick up the pieces of the moving target that is the novel coronavirus, the question is raised if this virus is cutting into issues that are merely a few months deep – or ones that have perhaps plagued America for centuries.