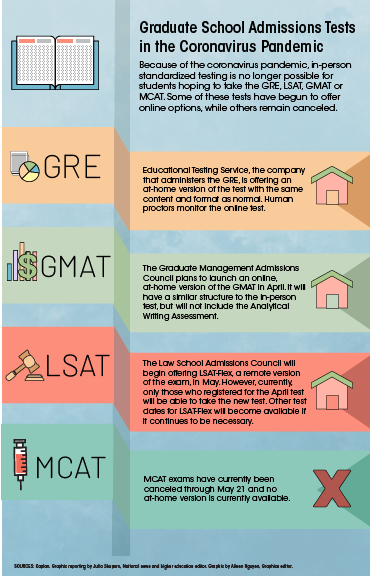 Students are left uncertain about graduate school admissions because of altered and canceled application tests amid the coronavirus pandemic.

The GRE, GMAT, LSAT and MCAT have all been altered or canceled over public safety concerns. Three smaller tests – the Dental Admission Test, Optometry Admission Test and Pharmacy College Admission Test – have also been canceled.

The LSAT is normally a tablet-based test taken at a designated testing center, Thomas added. Currently, the LSAT-Flex, a modified remote version of the LSAT is available to students who had their in-person LSAT canceled in March or April. Future administration of the LSAT is still scheduled to be held in person as of right now, Thomas said.

Administration of the MCAT has been canceled through May 21. However, three new test dates have been added to the 2020 testing calendar, which will include both morning and afternoon sessions on exam days, according to the Association of American Medical Colleges.

These changes to graduate admissions exams will likely alter how applicants are assessed by graduate schools this year, Thomas said. Several graduate schools have adjusted their testing requirements for this year’s application cycle in an effort to relieve burdens related to the impact of the pandemic.

For professional and graduate school programs within the University of California system, students should inquire with their particular program of interest for the most detailed information regarding this year’s application process, said UC spokesperson Stett Holbrook.

UCLA’s graduate schools are considering modifying their test requirements in the next admissions cycle, said Robin Garrell, dean of the graduate division and vice provost for graduate education, in an emailed statement.

There is no campuswide graduate admission test requirement at UCLA, Garrell added. Test requirements are set by graduate schools and departments for their respective programs.

California medical schools also plan to relax certain requirements for prospective applicants for the upcoming application cycle, according to a joint statement from the Admissions Deans of California Medical Schools, including the David Geffen School of Medicine at UCLA.

The medical schools will accept pass/fail undergraduate grades and applications without an MCAT score from those unable to take the test because of cancellations, the statement added.

The UCLA Anderson School of Management has also modified its application process to address disruptions caused by the pandemic. Test scores are still required for applicants, but the deadline for applications has been extended to June 1, 2020 for this year’s applicants.

The UCLA School of Law has not relaxed its LSAT requirements at this point because the LSAT-Flex is still available for applicants, said Robert Schwartz, assistant dean of admissions, in an emailed statement. However, for the fall of 2021, the law school will be accepting LSAT scores through the February 2021 administration of the test. Late requests to apply will also be considered on a case by case basis, he added.

The UCLA deans’ council, graduate council and graduate division have also issued a statement to address the disruptions caused by the pandemic.

Applicants to UCLA’s graduate and professional schools will be evaluated holistically, the statement said. Aside from test scores, a combination of personal accomplishments, letters of recommendation, personal statements, academic record and supplemental materials are all considered during admissions decisions.

UCLA admissions bodies will also be accepting classes with pass/no pass grading during this pandemic, the statement added.

While graduate school exams remain a part of the admissions process for certain schools, students will still be able to work on other components of their applications, Thomas said.

“Ultimately, students still have a lot of things in their control to put together a great application,” he said. “They are in control of letters of recommendation, the personal statements they write and (virtual exams) give them a little bit more control over the testing environment.”

Amid these changes, UCLA students are still left feeling uncertain about their future and graduate school applications.

Ryan Pan, a fourth-year global studies student, said he has not yet taken the GRE because of the disruptions and uncertainty of spring quarter.

“I have been really busy for the spring quarter, especially (with) this as a virtual quarter, adjusting to video lectures, and I also have a part-time job,” he said. “So I haven’t really had time (to prepare for the GRE).”

Shezan Jimenez, a fourth-year Italian studies student, said in an email that the pandemic has delayed him taking the GRE, which affected his application for a graduate school full-ride scholarship.

Jimenez was scheduled to take the GRE in early March, but the exam was postponed to a much later date because of the impact of the pandemic.

“This reschedule caused my scores to come in after March 31 and miss the opportunity for that scholarship, which was really really upsetting because I had everything planned out,” he said. “Then out of nowhere, it was gone. So now I’m scrambling to see how I will even pay for grad school, if I can go this year.”