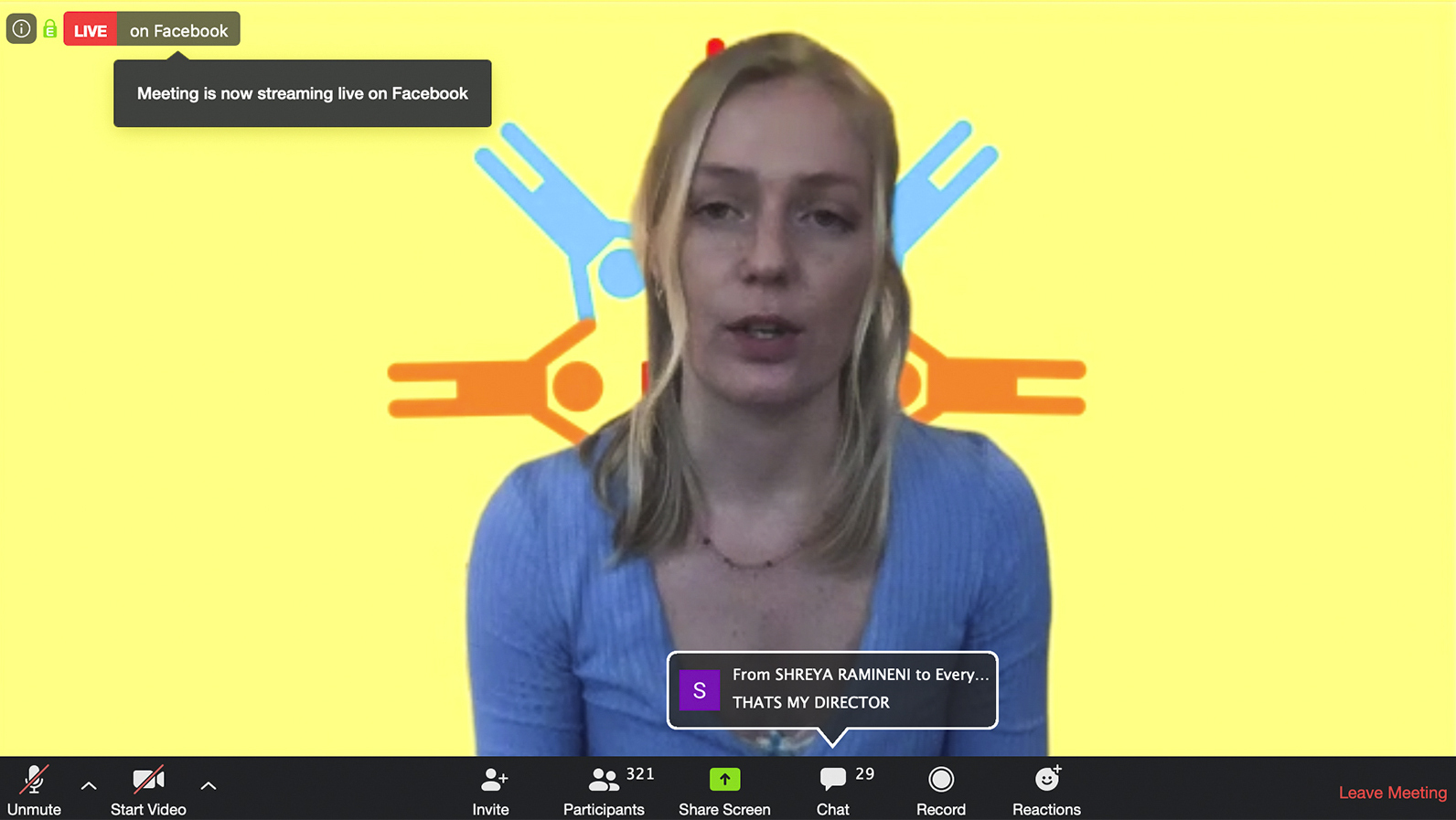 Fourth-year neuroscience student Saskia Leonard serves as the director of cause education at Pediatric AIDS Coalition at UCLA as the organization hosted the annual Dance Marathon via Zoom. (Kanishka Mehra/Assistant Photo editor)

Dance Marathon brought participants together in a time when everyone is meant to be apart.

The event, which took place Saturday on Zoom, united over 300 dancers on the virtual platform for four hours. Balancing educational content with bursts of upbeat activities like a drag performance, the annual event preserved its aim to illuminate the stories of those affected by HIV/AIDS and bring awareness to the cause. The Pediatric AIDS Coalition at UCLA, which hosts the event, hoped to highlight the commonalities of HIV/AIDS and COVID-19 by showing how these conditions are exacerbated by each other, said PAC president and fourth-year neuroscience and Spanish student Sophie Ahmad.

“We want to talk about how it intersects with COVID-19 just because they are similar in their history, the stigma surrounding people and the fear that broke out when this unknown infection was spreading around,” Ahmad said.

The gathering began with opening statements from Ahmad detailing Dance Marathon’s goal of defeating the stigma against HIV/AIDS. Decked in PAC’s bright yellow “Unite” T-shirt, the organization’s president introduced the a cappella group Medleys A Cappella to sing the national anthem. Then, with a screen split into a multitude of windows, viewers could see each of the singer’s faces as they sang a rendition of John Lennon’s “Imagine.”

Transitioning from song to dance, PAC’s leadership urged the audience to join them in the 2020 morale dance, traditionally taught at the beginning of every Dance Marathon. This year’s morale dance drew inspiration from daily life in quarantine, with moves inspired by mundane tasks like washing your feet or taking cereal off the shelf. Accentuated by quick shoulder shimmies and hip twirls, the morale dance was set to Diana Ross’s disco classic “I’m Coming Out” and was repeated three times throughout the event.

After the morale dance portion, PAC’s leaders introduced the team captains and their colors – ranging from a tie-dyed orange shirt to green gym shorts – followed by speaker Ben Banks and his experience with pediatric HIV/AIDS. After Banks’ story concluded, the cause education committee gave an educational presentation touching upon HIV/AIDS myths and the effects its stigma leaves upon those with it. One member of the committee, second-year microbiology, immunology and molecular genetics student Sam Joslyn, discussed the impact of stigma in relation to the ongoing COVID-19 crisis, including the physical assault of an Asian man in London.

“The effect of this stigma is in all aspects of life,” Joslyn said. “There’s been a rise in verbal and physical hate crimes all around the world, and this type of scapegoating has a long history.”

After taking questions about the presentation from the audience, the event transitioned into a performance by drag queen Lorelai. Strutting to Billie Eilish’s “bad guy” in a skintight velvet suit and coiffed mustache, Lorelai used the online platform to her advantage by utilizing a split-screen to project two versions of herself at once. Once the drag queen walked off the screen, PAC leaders facilitated the morale dance once again before beginning the event’s vigil to honor those with HIV/AIDS.

During the vigil, several UCLA-affiliated musicians performed, including Izzy Escobar, Mad, Akshay Anand, Shivan, Dark Dazey and Taxi. Escobar, lit by a hazy pink rose projected onto her, performed a song of hope that described how “the light always comes when you stop looking.”

Mad followed with a stripped-down ukulele song about the idealism of youth and teenage cliches, while Anand sang “maybe I’ve been alone too long,” drawing attention to the looming uncertainty of the current climate. Later, former Spring Sing contestants Dark Dazey and Taxi lightened the mood with upbeat, rock-infused dance tracks, while Shivan looped his guitar for a Michael Jackson cover.

After the live speakers concluded, Appurva Goel, PAC’s executive director of outreach and fourth-year economics and communication student, asked the participants to join another bout of random dancing before announcing how much had been fundraised. The grand total was $143,288.59 and served as a representation of the community’s dedication to bringing awareness to HIV/AIDS, particularly in the uncertainty of today’s climate, Goel said.

“A movement is not constructed of figures and facts, but people willing to take a stand against injustice and suffering,” Goel said.