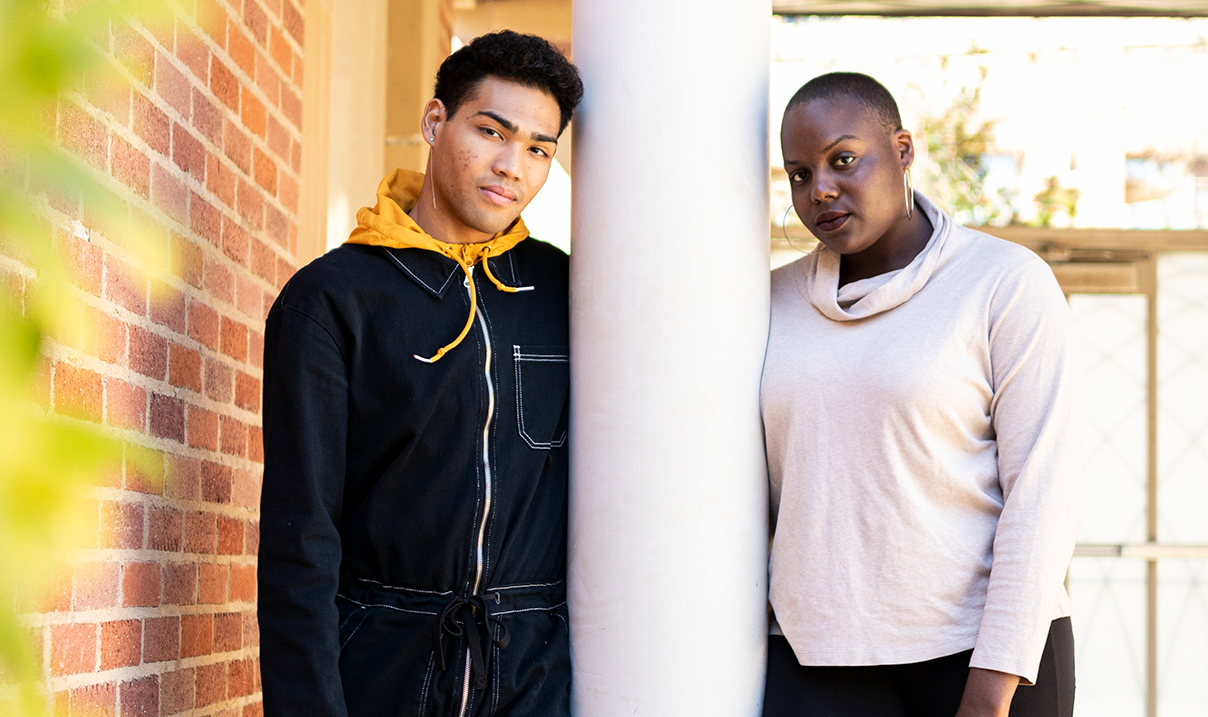 Fourth-year dance student Jerric Shaw and third-year dance student Oriana Elizabeth Simon will both have work featured in “Ideas in Action – Dance Edition,” an event taking place spring quarter that aims to provide a platform for students to informally share their projects. Simon said the performances offer people a chance to see what students in the department are accomplishing. (Esther Li/Daily Bruin)

Curiosity takes the stage as dancers experiment with what it means to interrogate movement within the artform.

“Ideas in Action – Dance Edition,” which will take place spring quarter, provides a platform for students to informally share their projects without having to face the stress of showcasing completed pieces. Second-year dance student Roni Nelson was selected to perform their piece, which they said deconstructs Horton technique, a practice that incorporates lateral movements and clearly defined shapes. Nelson said “Ideas in Action” serves as an intimate setting to showcase experimental work in a space that feels comfortable.

“(The event) is just a platform for students to show their work, since we don’t get many other chances,” Nelson said. “It’s also good because it’s informal, so we can get feedback and work on it.”

Many people who are familiar with Horton technique distance themselves from it because of its rigorous structure and constraint, but Nelson said their piece challenges those assumptions by breaking down the patterns to become improvisational. Nelson’s solo is an accumulation piece built on the word “discipline.” After centering their creative mindset on this idea, Nelson said they returned to the assumptions people have about the restrictive nature of Horton technique in order to show the ability to experiment while still following the technique’s rules.

To reflect the creative nature of “Ideas in Action,” this quarter’s performers were chosen through video submission by faculty in the world arts and cultures/dance department who felt the pieces were powerful. Fourth-year dance student Jerric Shaw was among those selected to perform. He said he uses the department’s approaches – such as detaching himself from solely using dance as a method of expression – to enhance his own choreographic style in his solo.

To do so, he created his own soundtrack and drew inspiration from his other works dealing with breathing, texts and soundscapes and combined these elements for his final project. The result is movement that is mostly improvised as well as a GarageBand compilation of soundscapes like wind, rain and ocean, FKA twigs’ “home with you” and an Alan Watts spoken word piece titled “Let Go of Attachment,” he said.

“I wanted to try something different where the music was following me, as opposed to the dancer following the music,” Shaw said. “In postmodern views, they don’t want you to be seduced by the music.”

To reflect these views in his work, Shaw said he choreographed the movement phrases first and then went to GarageBand to create the sequences of sound to go alongside them. He said using soundtracks that were nonlinear allowed him to experiment with sound and focus on layering so he could choreograph pieces that have artistic intention rather than using meaningless movement.

Third-year dance student Oriana Elizabeth Simon also took an experimental approach with her piece, in which she uses movement to interrogate the body. She said she created her 25-minute solo under guest choreographer Ligia Lewis, who guided her through the different ways the body can be used for performance.

In Lewis’ class, Simon said she was told to pick three “cultural objects” – for which she chose Beyoncé’s “Homecoming: The Live Album,” the Brazilian film “Vidas secas” and hoop earrings – and built around these items’ elements of struggle and exhaustion. To immerse herself in her inspirations, Simon used embodied practice, in which she implemented them into her activities every day until they became a conscious part of her routine.

“It was my mission to listen to Beyoncé’s ‘Homecoming’ album every day until I realized I couldn’t function unless I listened to it,” Simon said.

Lewis’ class also introduced Simon to the idea of nudity as an experimental choreographic tool. After drawing inspiration from a nude work, Simon said she interrogated vulnerability within her own body through her piece. As her clothing is removed, she sings loudly to Beyoncé’s “Get Me Bodied,” which only she can hear, reads lines from “Vidas secas” and creates spatial pathways.

She said many of her works subvert traditional storytelling and lack a clear beginning, middle or end. For “Ideas in Action,” Simon will be showing a five-minute excerpt of her work. Simon said she hopes the intimacy of the event will let the audience question her piece and continue thinking about its message after it’s over.

“The purpose of my work is not to evoke some sort of feeling or some kind of story in the audience,” Simon said. “I want them to question what I’m doing and still think about the performance after it has ended. I don’t have to tell you a story you already know.”

Audiences engage with the works by providing feedback on how they perceived the stories, making “Ideas in Action” a conversation between both dancers and audiences. The performance will show people the kinds of works being produced in the department, Simon said. By showcasing works in progress, it also offers dancers the opportunity to continue evolving and improving their experimental pieces.

“There is something really special about dance,” Simon said. “It has a way of changing people’s lives, not just on the civic level, but it transpires something within yourself. I believe dance is that one thing that just fixes everything.”