The Quad: How the impact of ASMR has been felt across the internet 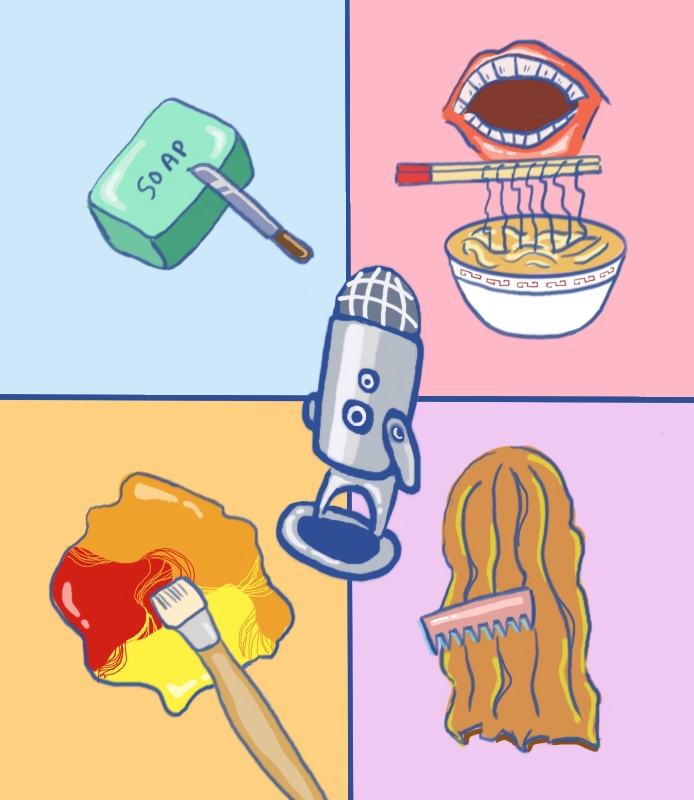 Your roommate has been watching someone pop bubble wrap on the internet for the last hour – again.

However, what originally seemed like the beginning of yet another strange roommate story may actually be attributed to something much less obscure. Autonomous sensory meridian response, or ASMR, describes the uniquely pleasant feeling that people get in response to specific videos or sounds. Over the last decade, this feeling has turned into a phenomenon as more and more people create and view videos intended to elicit this response.

Videos of this nature can range from complex role-play voice-overs to random acts like a person stirring a bowl of soup. ASMR videos are diverse in content because people are stimulated by different kinds of things – what triggers a response in one person may have no effect on another.

Accordingly, a quick search on YouTube yields a massive collection of ASMR content for every taste – videos from washing hair to a simulated optometrist visit to three hours of rain sounds.

The driving force behind the popularity of these videos is the sensation they allegedly produce. ASMR content has been found to create a relaxing or tingling sensation that starts in the scalp and moves through the rest of the body. Because of this sensation, these videos can help some people go to sleep.

Gabriel Rojas, a third-year international development studies student, shared a personal account of how he believed ASMR affected him.

“I think the reason I like things like fabric sounds or scratching is maybe, when I was little, my tia would scratch my head, and I would go to sleep,” Rojas said. “So it kind of triggers back to things like that, … like comfort and stability.”

As follows, ASMR is extremely popular – with Bruins and non-Bruins alike – but it technically didn’t exist not too long ago.

The humble beginnings of ASMR are found in a forum on the website SteadyHealth called “WEIRD SENSATION FEELS GOOD.” This forum contained individuals’ experiences with these unexplained sensations and inspired cybersecurity company manager Jennifer Allen to try to consolidate and create a name for what people were feeling.

Allen created the name for this phenomenon and popularized it when she created her 2010 ASMR Facebook group and participated in the “WEIRD SENSATION FEELS GOOD – PART 2” thread.

Today, ASMR videos have achieved extreme levels of viewership – into the millions of views. For example, a video on YouTube that shows the making of strawberry ice cream rolls has over 37 million views. ASMR has also infiltrated other internet platforms and can be found on Snapchat in the “Oddly Satisfying” channel and on Spotify as its own genre.

Snapchat’s “Oddly Satisfying” channel features small snippets of videos intended to stimulate pleasurable responses in their viewers. For example, some of this past weekend’s hits featured clay cutting, potato pressing, soap squishing and a surprisingly large assortment of peeling things.

According to Rojas, ASMR videos have also cultivated a type of community through the interactions in the comments section.

“A lot of the times in my process of going to sleep, I will be not only watching the video, but a thing a lot of people do is go to the comments,” Rojas said. “It’s almost like a weird little community. As you’re watching this video and falling asleep, you’re reading the comments.”

The popularity of ASMR, as measured by Google Trends web search for “ASMR,” grew steadily from its inception until it reached its peak in February 2019. Though searches for ASMR are no longer on the rise, there still maintains a steady following. In fact, the account HunniBee ASMR posted a video Friday that received 121,000 views in just three hours.

Additionally, at present, there is not much scientific research on the subject, and most information is collected from individuals’ personal accounts. However, researchers from the Department of Psychology at The University of Sheffield conducted a series of studies attempting to uncover some of the mysteries of ASMR. Among these findings were lower heart rates in participants who self-identified as experiencing ASMR while watching ASMR videos.

Further, an academic clinical neurologist at Yale University’s School of Medicine, Steven Novella, proposed some theories for ASMR’s mechanism in 2012. Specifically, he thought that ASMR could be the result of small pleasurable seizures or could be associated with the brain’s way of rewarding individuals for increasing their survival probability. He also stated that differences in humans’ brains, or neurodiversity, could explain why some feel a response to certain videos while others do not.

While progress is made on the scientific front, businesses have integrated ASMR into their marketing techniques. For example, major companies like Dove, IKEA, Coca-Cola, KFC and McDonald’s have created advertisements and campaigns that aim to evoke ASMR in their viewers. IKEA, for one, saw major success after its ASMR-oriented advertisement and reported an increase of 5.1% in online sales throughout the duration of the campaign.

However, companies are not the only ones cashing out on the ASMR phenomenon – individuals can also profit off ASMR content. The woman behind Gentle Whispering ASMR, one of the ASMR channels with the most subscribers on YouTube, is estimated to make at least $130,000 per year, according to Business Insider.

ASMR is clearly deserving of attention, if only by virtue of its undeniable popularity. Moreover, as we gain a better understanding of ASMR, its calming properties may be harnessed in stress management and beyond.

What began as the internet’s fascination with watching someone slice up soap has quickly turned into a global phenomenon, an interesting area of research and maybe even your roommate’s not-so-strange hobby.