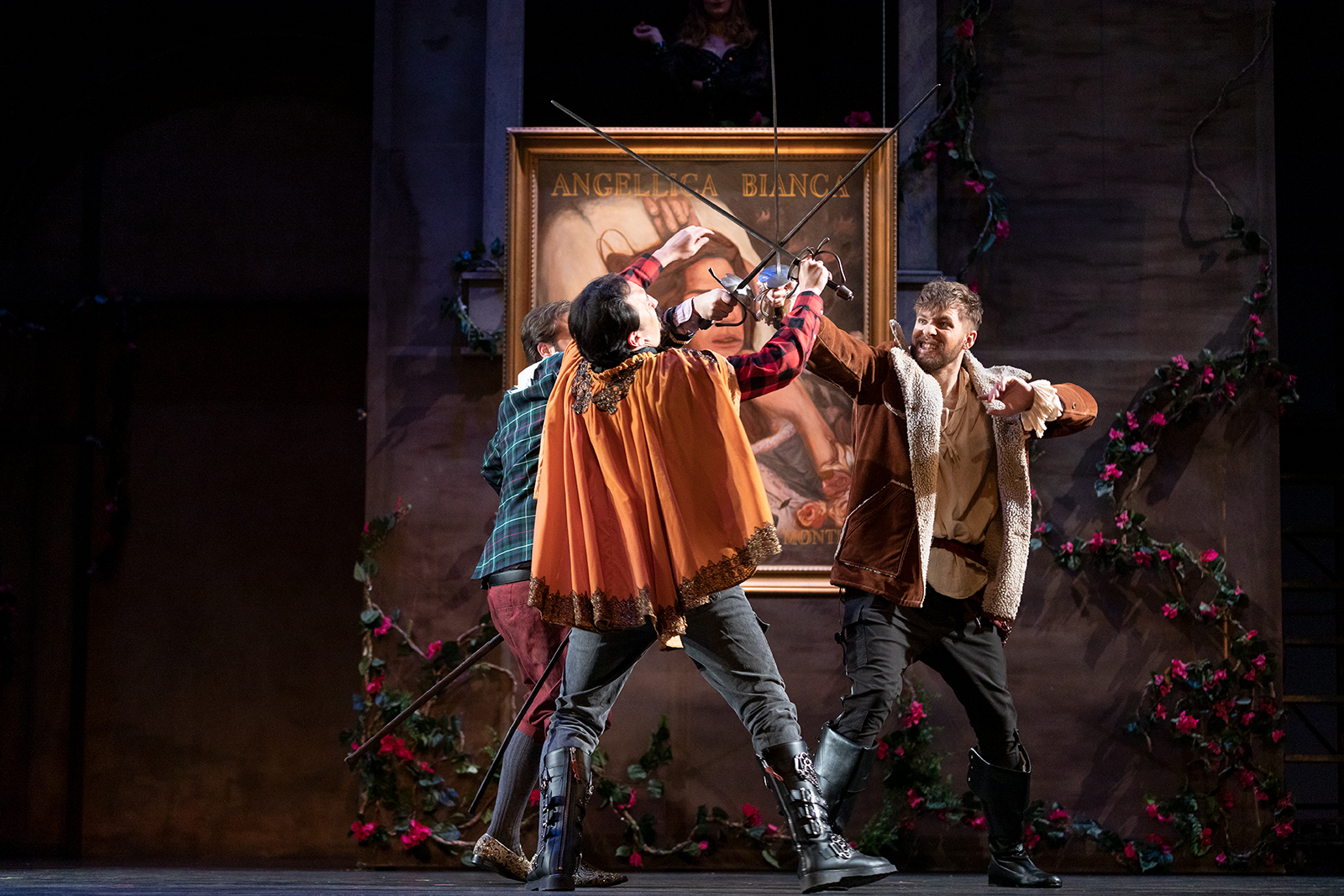 A modern rendition of “The Rover,” directed by Emily Chase, will run at the Freud Playhouse through March 14. Originally written by 17th-century playwright Aphra Behn, Chase said the play portrays female characters who were ahead of their time. (Tanmay Shankar/Assistant Photo editor)

“The Rover” provides a remarkably prescient take on social norms for a play that premiered in 1677.

Running at the Freud Playhouse through March 14, director Emily Chase said “The Rover” was originally written by 17th-century playwright Aphra Behn, one of the first female playwrights who was able to support herself with her work. Chase said Behn was a writer during the Restoration era, when the British monarchy was reestablishing itself after decades of King Charles II’s exile. Though it features outdated perspectives on race and religion, she said the play’s portrayal of female characters was far ahead of its time.

“(Behn) wrote about women who were, without apology, … sex workers doing what they need to get ahead in life and take care of themselves,” Chase said. “There’s a kind of empowerment for women that is very unusual for the place and time.”

But this is still a 17th-century play, so the leads and most of the characters are male. The play follows two knights who are tasked with protecting the exiled king as they travel to Naples, Italy, for the annual pre-Lent bacchanal known as Carnival. Graduate student David Kepner plays Willmore, the titular “Rover,” who just wants to indulge his depravity during the festival, but ends up caught in a love triangle. He meets and falls for both Hellena, a young woman destined to become a nun, and Angelica, a courtesan whose affection would cost Willmore an amount of money he does not have.

Kepner said he drew inspiration from comedies he’s enjoyed in the past, particularly Johnny Depp’s portrayal of Captain Jack Sparrow in the “Pirates of the Caribbean” franchise. Depp’s wavy, perpetually intoxicated mannerisms inspired Kepner to portray Willmore in a similar fashion. However, he said Willmore’s attitude is more of a shield because he is perilously afraid of being in love. For the protagonist, love is a weakness and detrimental to his traditional notions of masculinity, Kepner said.

“He doesn’t want people to see his vulnerable side, and that’s what Hellena brings out in him,” Kepner said. “Willmore is trying to pass as this manly pinnacle of a man, … but underneath he’s trying to hide his vulnerabilities.”

Willmore’s closest companion, Belvile, is quite the opposite character. He is played by graduate student Rogelio Douglas III, who said Belvile is a romantic whose only goal is to find the woman he loves and propose to her. Douglas, however, took an entirely different approach in seeking out influences for his character by making playlists.

Douglas said he compiled a mix of tango, salsa, soul and ’90s R&B to get into the mind of a character who has romance on his mind but keeps getting distracted by the temptations that surround the Carnival celebration. Every day before rehearsal, Douglas said his song of choice was “All My Life” by K-Ci & JoJo, which helped him get in the right romantic mood. The song particularly reflects Belvile’s confident and gentle nature while complementing his charm and grace.

Graduate student Kathryn Schott portrays the similarly charming and romantic Angelica, who comes off not like the typical coy and chaste woman of the time period, but one who is sexually liberated and financially self-reliant. However, Schott said this outward demeanor is all a part of her business. Angelica is a courtesan, a paid-for social and sexual companion who recently returned to Naples looking to take on new clients.

Schott said Angelica represents a character who at the time was unheard of – an independent, self-sufficient woman who was comfortable with her sexuality. However, Angelica’s weakness is in matters of the heart. When Angelica and Willmore first get together, Schott said she quickly develops an emotional attachment that throws her off her game. This affection is a new experience for the character who has spent years dealing with platonic sexual partners and never falling in love.

“All of a sudden Angelica goes from not ever having experienced love … to falling in love and not knowing what to do with that,” Schott said. “Willmore has made all these promises of being in love, and (Angelica) is less canny than (she) might ordinarily be if it was just a financial relationship.”

Set in a more reserved society than that of modern times, the characters utilize the Carnival celebration as an excuse to indulge in risky behaviors and take chances when they would otherwise restrain themselves. For Chase as the director, Carnival is almost a character unto its own. The looser social norms allow the characters to be more honest about their desires, she said. The setting also led Kepner to lean in to the easy nature of Willmore’s personality, exacerbating a character who takes fun to an extreme and bounds around the stage with his fellow cavaliers.

“This play demands such high energy all the time that if you do not deliver on that, it becomes a bore,” Kepner said. “This is the first play where I feel like it’s almost an athletic event.”