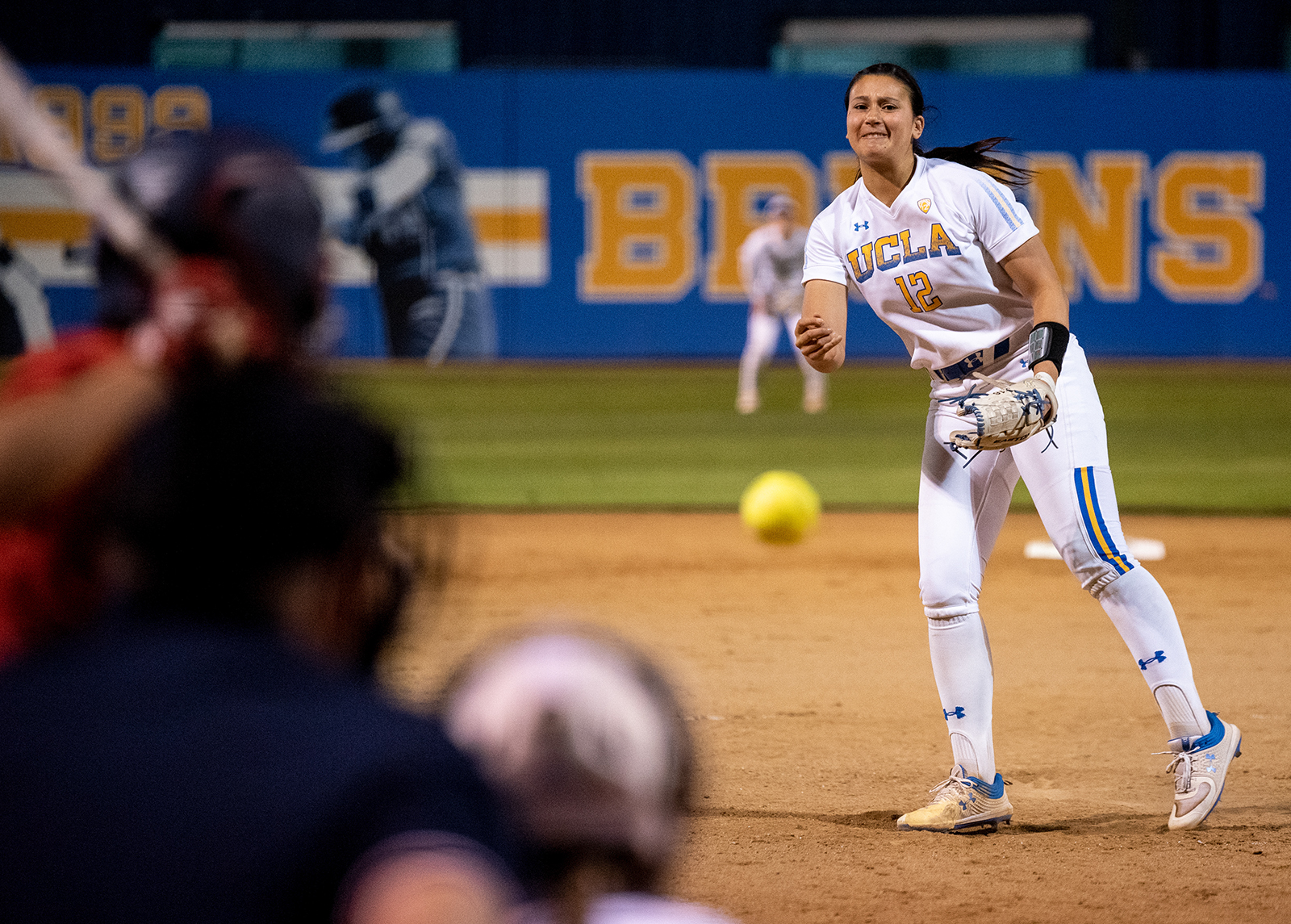 Except with a softball bat instead of a baton, and the only loser being the opposing pitcher’s ERA.

“Pass the bat is our team motto,” said Washington. “It’s about trying to get as many people up to bat as possible.”

Eight first-inning runs were all that No. 1 UCLA softball (20-1) would need in its eventual 9-0 victory over St. John’s (7-13) on Tuesday night. The Bruins entered the game averaging more than two runs scored in the first inning alone, with 45 total runs, more than they’ve scored in any other inning.

Prior to St. John’s pitcher Angela Saric’s early departure after only 2/3 innings of work, UCLA batted through the lineup, recording four hits and two walks, and taking advantage of two errors by the Red Storm.

Junior shortstop Briana Perez got the scoring started with an RBI double to knock in Washington. Two at-bats later, freshman utility Maya Brady doubled in Perez on a shot through the right side of the infield – advancing to third on an error – to match Perez’s team-leading 26 RBIs.

Washington, in her second plate appearance of the inning, capped the Bruins’ rally with a line drive three-run home run to right field – the third round-tripper of her UCLA career.

“I’ve been really practicing with (Slaught), trying to add more power to my game, so to see it play out in the game is really cool,” Washington said.

While the Bruins were providing valuable run support, starting pitcher freshman Lexi Sosa transitioned from sitting idly by in the dugout to warming up in the bullpen, waiting to head back out to the circle for the top of the second.

Sosa walked the first batter she faced that frame. Coach Kelly Inouye-Perez and assistant coach Lisa Fernandez called time to settle down the freshman pitcher for the rest of her five-inning shutout performance – her second in five days.

“(Fernandez) called a timeout and had a little chat with her, and then you saw (Sosa) show up and pounding the zone and getting after it,” Inouye-Perez said. “But those are part of the dynamics – if your team puts up eight runs, you can’t give it right back to them.”

The next play was a line out to junior third baseman Delanie Wisz, in which she doubled off the first base runner.

Sosa prevented every St. John’s base runner from advancing past first base and established a new career-high in strikeouts for the second time in a span of five days, with seven batters sent down swinging.

“I’ve definitely (gotten more comfortable),” Sosa said. “I’m just sticking to what I know, and I know the girls are right behind me.”

Inouye-Perez said she’s seen Sosa adapt over the past week to college softball and found her groove in the rotation after beginning her first four pitching appearances with a 4.20 ERA.

“A big part of college is that there’s an emotional transition from just being a dominant (high school) senior to thinking there’s something you need to do differently in the college game. … That was by far the most impressive outing (Sosa’s) had,” Inouye-Perez said. “She threw the hardest she’s thrown. … She was working ahead in the count, she got out of some jams. That’s the Sosa we know.” 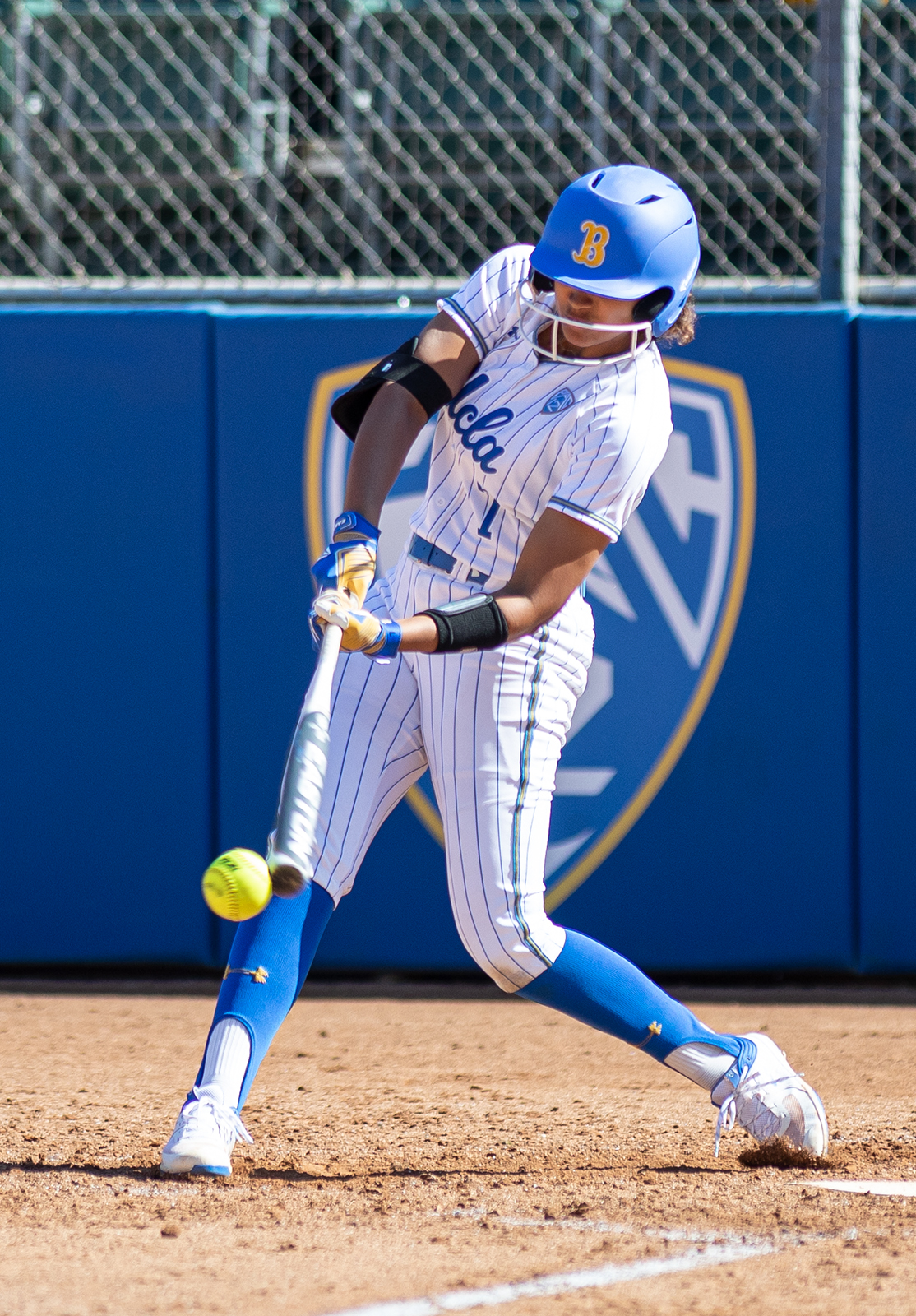