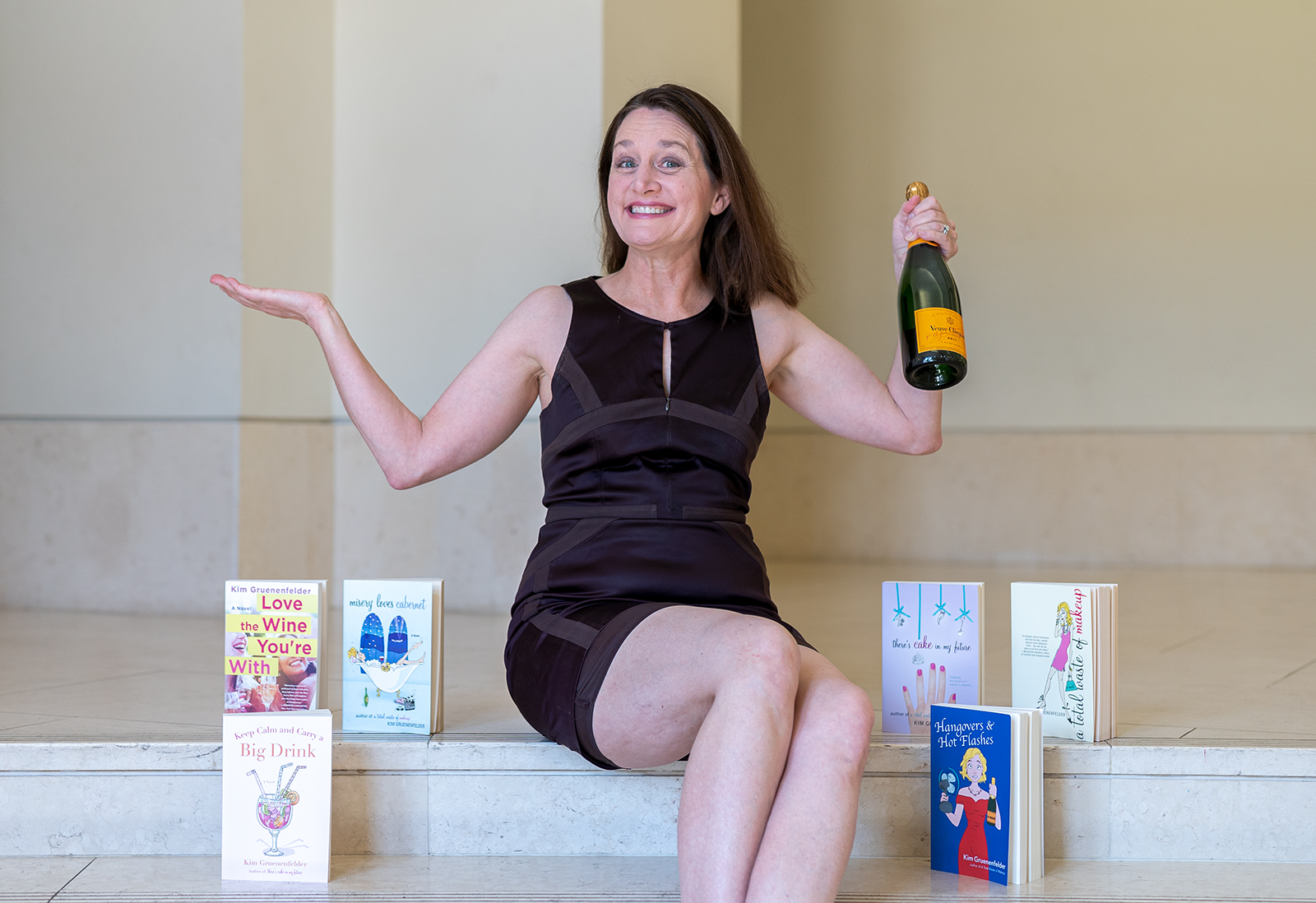 Kim Gruenenfelder has six published works and just recently turned in her seventh novel to her agent. Gruenenfelder, a women’s fiction and romantic comedy writer, said she unapologetically writes for women, and her characters are often based on her own life stories. The alumna said it’s important to fill in the gap for older women who are not often the focus of romantic comedies despite having equally humorous experiences. (Courtney Quirmbach/Daily Bruin)

Kim Gruenenfelder said someone once told her during a date that men need to be the center of attention – rather than their wives or girlfriends.

This experience, along with other dating horror stories from her and her friends’ lives, has gone on to influence her characters, she said. Gruenenfelder, a women’s fiction and romantic comedy writer, has published six books. Her first novel “A Total Waste of Makeup” was published in 2005, and she recently turned in her seventh work to her agent. The alumna said she writes about the common struggles women share and also tries to highlight female characters in their 40s who are often overshadowed in the genre by stories about younger women.

“I unapologetically write for women – I write about dating, I write about wanting to have kids,” Gruenenfelder said. “I wrote about turning 30 and feeling like everybody else was ahead of me, and (‘A Total Waste of Makeup’) I think was successful because a lot of women feel that way.”

Gruenenfelder’s characters are often based on her own life stories, she said. Jennifer Coburn, another contemporary women’s fiction author and friend of Gruenenfelder’s, said they became acquainted after she read “A Total Waste of Makeup.” Drawn to the book’s comedy, Coburn said Gruenenfelder’s readers can find the humor and lightness in shared experiences with the characters, such as frustrations in one’s dating life.

When Gruenenfelder was 29, she was the maid of honor in two weddings, watched friends become increasingly successful screenwriters and had a friend expecting a baby, she said. She felt happy for them, although Gruenenfelder said she felt behind in her career and personal life.

In “A Total Waste of Makeup,” the protagonist, Charlie, has similar feelings as the maid of honor at her younger sister’s wedding, experiencing some of the insecurities Gruenenfelder had during weddings when she wasn’t dating anyone, she said.

“What I was trying to show was just because you feel like you’re behind right now, it doesn’t mean you are,” she said. “It just means things aren’t looking the way you thought they would, and that’s OK.”

As Gruenenfelder’s personal and professional life has changed since 2005, she said she wanted to write about the experiences of older women. Whitney Dineen, her friend who is also an author, said Gruenenfelder is now married with a son in college. She is writing about what she is more familiar with in this stage of her life, Dineen said, displayed in her most recent 2018 novel, “Hangovers & Hot Flashes.”

In the book, one character dreads feeling empty as her twins are soon going to college, having known couples who feel unsure about their future after the youngest child leaves home. She also wrote about one of her characters experiencing early menopause and a third character who is going through a divorce.

One reason why she wrote “Hangovers & Hot Flashes” was to continue writing about her life experiences past the age of 30, as many of her fans have grown older alongside her, she said.

“To be so youth focused is to the detriment of all women, because we cheat 20-year-old women out of the experience of getting to know us 40-plus-year-old women,” Coburn said. “We erase older women, and my God, the world does a good enough job erasing us.”

Even though she was advised to write another book about women in their 30s, she chose not to and wrote “Hangovers & Hot Flashes,” which initially was turned down by several publishers. Editors mentioned they loved the book and could relate to the storylines, but their marketing departments did not find it sellable. Gruenenfelder felt this was because some publishers think women in their 40s do not buy books.

Dineen said such limitations from the industry sometimes force romantic comedy authors to only think inside the box, within the genre; books about young women are often more of the money makers, but Gruenenfelder lets her characters age. Gruenenfelder wanted to escape the restrictions of writing formulaically within publishing norms, Dineen said, even if top publishing companies might not be willing to put their money behind it.

Despite being turned away by publishers, Gruenenfelder said she still felt compelled to write the novel.

“I chose to do those stories for (‘Hangovers & Hot Flashes’) because I have friends in their 40s who don’t feel like anybody’s writing for them,” she said. “When you’re not quite sure what your personal life is, in my mind, is a very universal story for middle-aged women – I know a lot of people going through some version of that.”