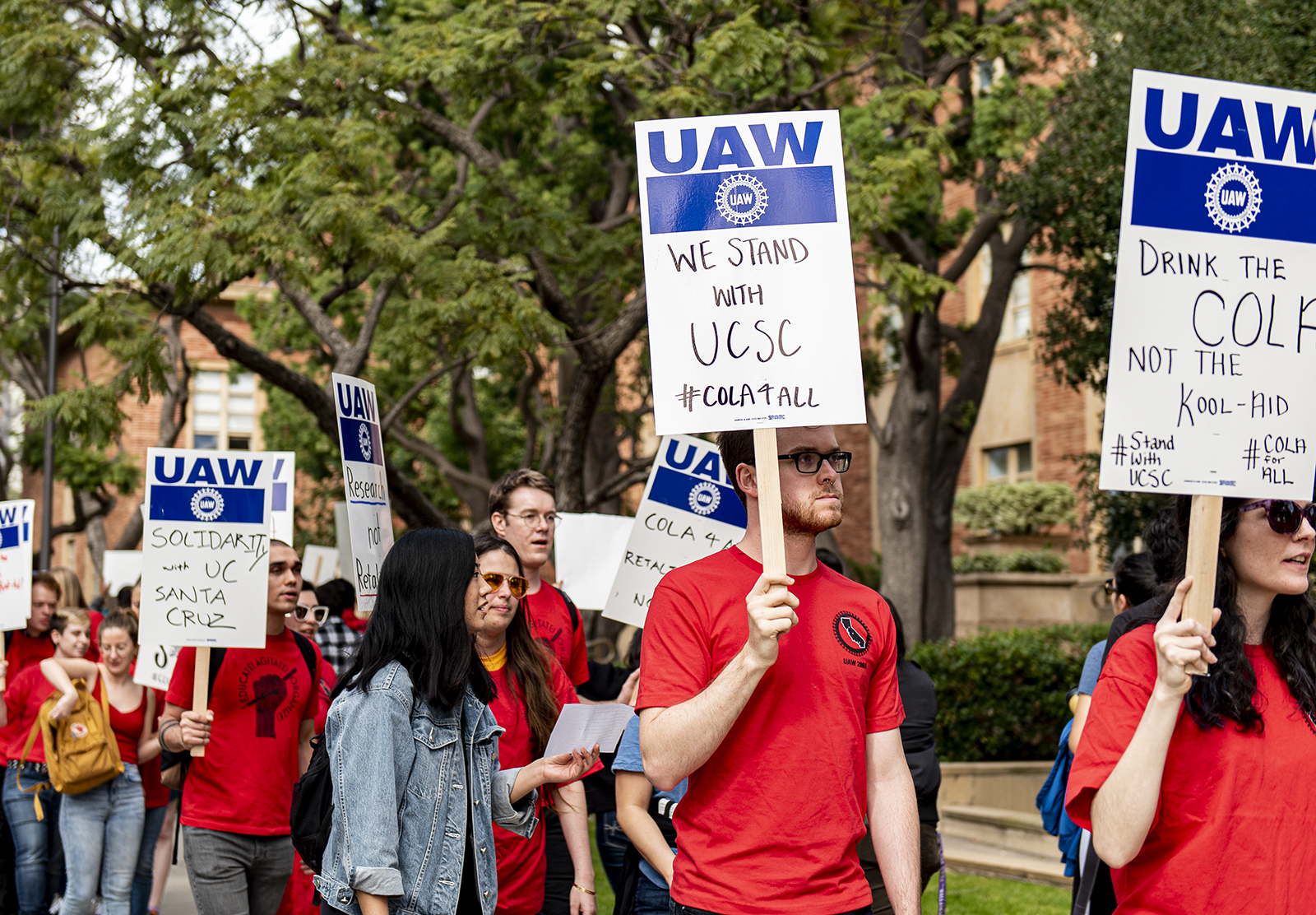 The union representing University of California student workers filed several unfair labor practice charges against the UC and is considering voting for a systemwide strike, according to a Monday press release.

United Auto Workers Local 2865 claims the UC acted unlawfully in the way UC Santa Cruz suspended and disciplined striking student workers Friday. The union will also consider calling for a vote to go on a UC-wide strike after meeting with representatives from each UC campus this week, according to the press release.

“The union’s elected Bargaining Team will convene this week to discuss our options, and that includes a possible strike authorization vote in response to UC’s repeated Unfair Labor Practices,” said UAW Local 2865 President Kavitha Iyengar in the release.

Graduate students at UCSC began striking in December for a cost-of-living adjustment to their wages by refusing to turn in fall quarter grades. In response, UCSC fired 54 student workers Friday and prohibited them from securing spring quarter appointments.

“UC should sit down and bargain with the union for a COLA rather than terminating and denying future employment to our members who are fighting (for) fair wages for all academic student employees to meet the high cost of housing,” Iyengar said in the statement.

UAW Local 2865 did not authorize the UCSC strike but invited the UC to bargain for a cost-of-living adjustment, or COLA. However, the UC has refused to reopen its contract with UAW Local 2865 so far. The contract, which has been in effect since August 2018, will expire in June 2022.

“We formally asked UC to come to the bargaining table and negotiate a cost of living adjustment months ago – and they continue to refuse,” Iyengar said in the statement. “Instead they have consistently tried to do an end run around the union in both the bargaining and discipline process.”

UC spokesperson Andrew Gordon said in an emailed statement that reopening negotiations would defeat the purpose of a signed agreement and would be unfair to other UC workers adhering to collective bargaining agreements.

The latest UAW Local 2865 complaint alleges the UC violated several sections of the Higher Education Employer-Employee Relations Act. It alleges the UC retaliated against the 54 UCSC workers following the union’s request to bargain and selectively disciplined individuals in union-represented positions but not in non-union-represented positions, such as research assistant positions.

The complaint also alleges the UC unilaterally prohibited workers from securing employment in spring quarter and bypassed official discipline procedures by using the Code of Student Conduct for employment acts.

Gordon said in the statement that the UC is sympathetic to the high cost of living that graduate students experience but added that these strike-related activities negatively impact undergraduate students.

Gordon added the UC is reviewing the latest UAW Local 2865 complaint and will respond at a later time.