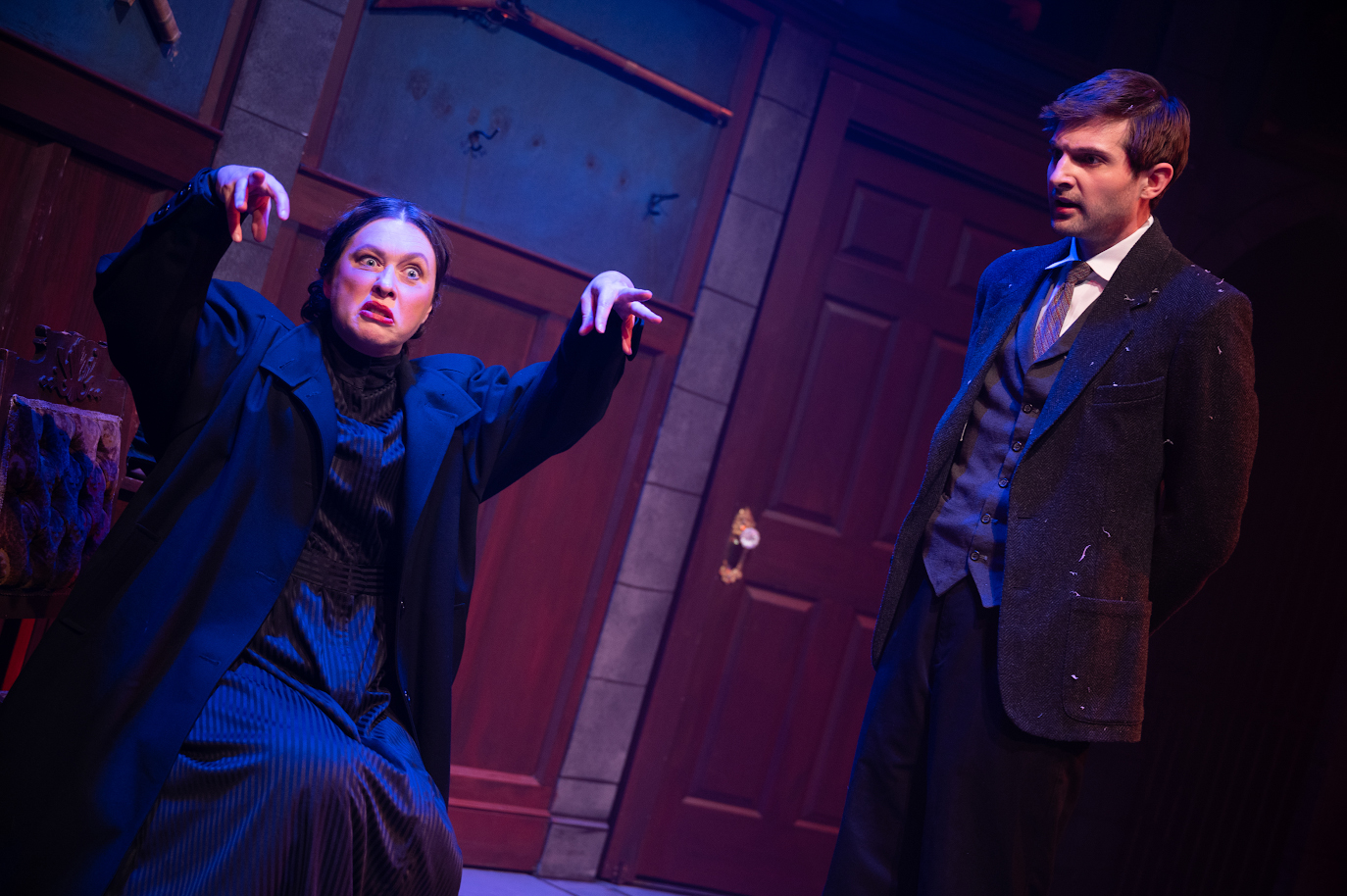 Alumna Teressa Foss plays Miss Shingle alongside Kevin Singer, who portrays Montague “Monty” Navarro, in 42nd Street Moon’s “A Gentleman’s Guide to Love and Murder.” Running until March 15 at the Gateway Theatre in San Francisco, Foss side the small size of the theater allows a more immerse experience for the audience. (Courtesy of Ben Krantz Studio)

Wealth, villainy and hilarity come together for an intimate performance in “A Gentleman’s Guide to Love and Murder.”

The play, produced by 42nd Street Moon in San Francisco, features alumna Teressa Foss, who portrays Miss Shingle, a maid to the wealthy D’Ysquith family in turn-of-the-century England. Miss Shingle served a young D’Ysquith daughter who was disinherited from the family for marrying an unsuitable man and producing a child.

Running until March 15 at the Gateway Theatre, Foss’ role begins when a maid arrives at her doorstep to inform her that her son is the potential heir to an incredible fortune. Foss said the intimate size of the venue allows the audience members to immerse themselves in the production, almost as if it were dinner theater.

“We get up close and personal,” Foss said. “The impact of the comedy is even more heightened, the door-slamming farce aspect of it. It’s kind of like ‘Downton Abbey’ meets Disney’s Haunted Mansion.”

Foss herself is no stranger to small, intimate performance spaces. When she graduated from UCLA in 1992, Foss said she played plenty of 99-seat theaters while she was cutting her teeth as an actress. But even after having recently performed at the 1,200-seat Opera San José, she said she likes performing musicals in small spaces because she can use her natural voice without amplification from microphones.

Foss said she grew up performing community theater in California central coast towns like Carmel and Monterey, where the budget for body microphones and audio technology was virtually nonexistent. Given her background, Foss prefers to perform with her sound hitting audience members directly.

However, music director Daniel Thomas still found it challenging to scale down the original production to fit the space of the Gateway. He said the play is ideal for smaller spaces, but the music was written for a 12- to 15-person chamber orchestra that he had to reduce to three – a pianist, keyboardist and woodwind player who cycle through instruments as the music necessitates.

“Because (the play) is very much a chamber piece with elements of operetta and light classical style, having a lot of oboe, English horn and clarinet creates a sound that still remains authentic to the composer’s intention while allowing us to do it in an intimate space,” Thomas said.

The sounds he didn’t have to worry about, however, were the actors themselves, who Thomas said are all capable singers. Foss performs one of the first numbers of the show called “You’re a D’Ysquith,” which she sings to the main character, Monty, informing him of his parental legacy. All of Foss’ singing and acting is done in full-costume of the time period, including a rather restrictive corset that she said challenged her during early rehearsals.

Foss said several of the actors donned their corsets as soon as they were available because it completely changes one’s posture and breath. During early choreography work, she said the actors could allow their torsos to be fluid and curve back and forth across the performance space. But that sort of movement was impossible in a corset ,so they had to begin practicing while wearing the restrictive garments as soon as possible, which Foss said was invaluable to her acting process.

“(The costume) really informs the character because of course the people of the time would wear these corsets,” Foss said. “It really changes you from a 21st-century person into somebody living in London in 1909.”

Because of the play’s time period and setting, director Daren A.C. Carollo said proper diction and pronunciation both in dialogue and song were paramount to audience satisfaction. Unlike perennial musicals such as “Les Misérables,” in which a large portion of the audience may already know the lines and songs, Carollo said this is likely to be the first time an audience member has ever seen “A Gentleman’s Guide to Love and Murder.” Carollo said audience comprehension is so critical to the the comedic effect of the show, that he had actors drill their lines and master the lyrical pronunciation of early 20th-century British accents at every rehearsal.

“The No. 1 thing we do as storytellers is say the words and sing the lyrics,” Carollo said. “We want to be word for word, and we want to enunciate clearly. … The diction and enunciation is very specific.”

For many of the actors though, this wasn’t the first time speaking with an English accent. Foss said she found a great deal of influence from the Victorian-era comedies of theatrical duo Gilbert and Sullivan, many of which she’s performed in herself. In addition, she drew from two characters in the British melodrama “Downton Abbey.” Foss said the busy-bodied, no-nonsense chef Mrs. Patmore and the supportive lady’s maid Anna influenced her performance in Love and Murder. But no matter the source, Foss said the artistic influence she needs is always out there.

“If you stay involved with what other people are doing artistically, you find as you go along that you can pull in a lot of other references and energies without even realizing that you’re doing it,” Foss said.