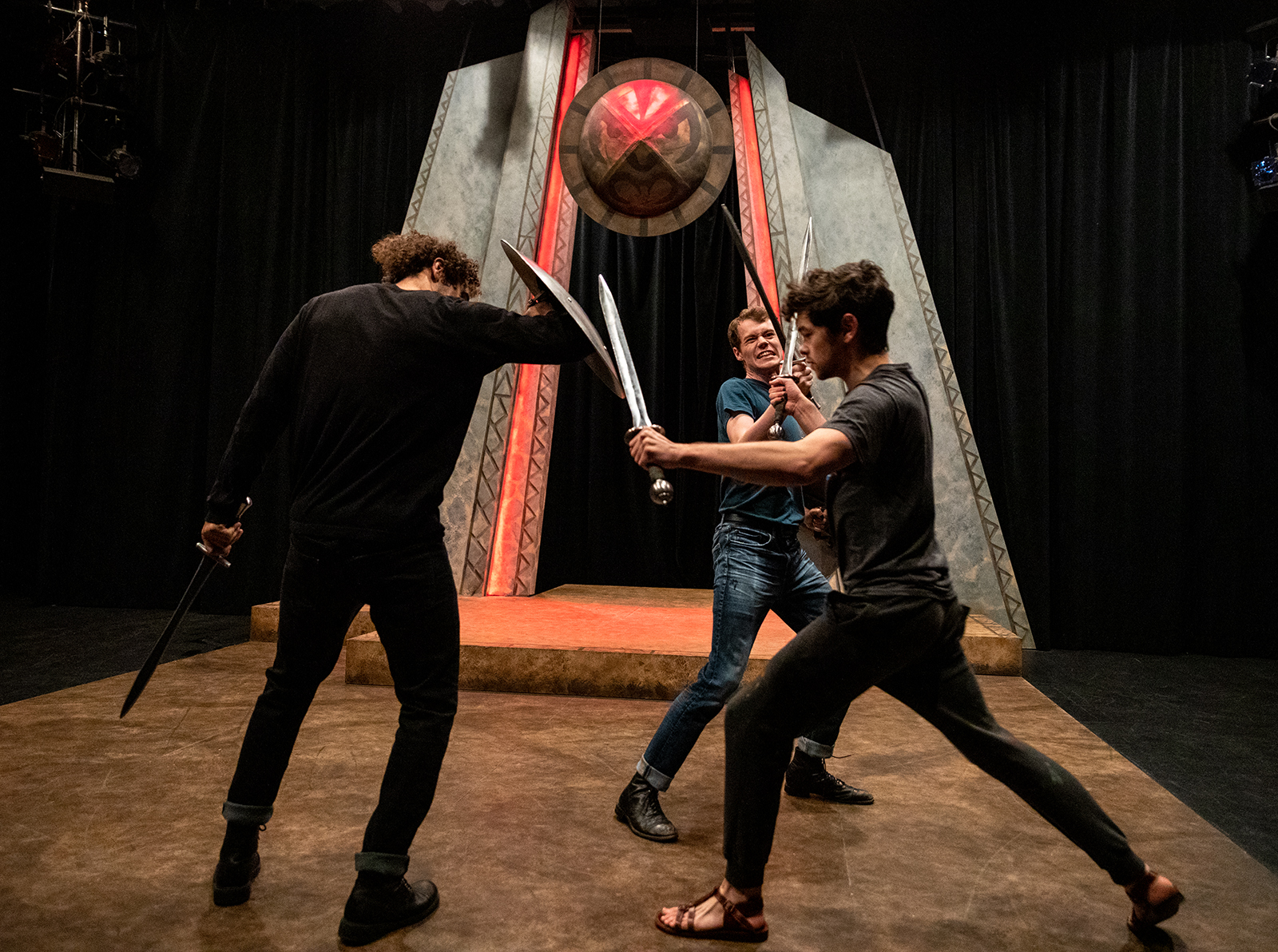 Women’s struggles and sacrifices to survive in “Troilus and Cressida” have a particular resonance with modern life, Rob Clare said.

“Troilus and Cressida,” originally published around 1609, is based on the Trojan War and the gender constructs of the time, ranging from the objectification of women to toxic masculinity. Clare, director and lecturer in the UCLA School of Theater, Film and Television, said he was drawn to producing the lesser-known Shakespeare play because of its challenging characters and complex storylines. In particular, Clare said the role of women and the sacrifices they make for survival in a male-dominated society were integral to the production, which premieres Friday in Macgowan Hall.

“The women in the play are held up as trophies to be fought over or won,” Clare said. “In a world dominated by codes of so-called honor – another name for which is male toxicity – their voices and warnings are often ignored, despite the consequences.”

As the female lead, Cressida, Sylvia Abrams-Wolffsohn, a second-year theater student, said her performance allowed her to experience the struggles faced by women in order to survive in a male-centric society. Cressida’s sacrifices and desires made her an incredibly human role, and Abrams-Wolffsohn said she relied on in-depth character analysis with Clare and extensive rehearsals to capture the conflicting decisions made for self-preservation.

“(Cressida) experiences a lot of trauma,” Abrams-Wolffsohn said. “Her fears of men behaving without consequences within the play are completely valid. Her role is as a passage for the audience to experience this world wrapped up in war.”

The message Cressida embodies is accented in Clare’s edits to the original piece, Abrams-Wolffsohn said, which adapted the verbose elements of the play to make it more approachable for a modern audience. Clare combined several minor characters into a single character and simplified or removed large sections of confusing dialogue to cut down the runtime. The only major thematic change was that the prologue has been staged to feature the voices of female performers instead of one male, highlighting the strength of the female voices at the beginning and their later suffocation throughout the play.

However, beyond the prologue, Clare said he’d refrained from giving women a stronger presence in his edits so their lack of voice remains a powerful statement. Abrams-Wolffsohn said the message is embodied in scenes without Cressida, despite her being a main character in the story. The objectification of women forms both the war’s and the play’s foundation, Clare said.

Zach Kumaishi, a fourth-year theater student, said Cressida’s reliance on men for safety stemmed from her lack of agency within society. Kumaishi said his role as the male lead, Troilus, allowed him to better understand the role men played in facilitating her powerlessness and eventual moral betrayal, seeing her pain through his interactions with her.

He said, while he needed to embody masculine ideals, the trauma of Cressida’s experiences and the weight of her sacrifices were reflected deeply in the actions of his character, culminating in a tragic ending. The audience then witnesses Cressida’s intensely intimate journey through Clare’s choice of having the actors deliver lines directly to the audience.

Abrams-Wolffsohn said her ability to deliver her lines in such a way raises contemplation on how she has otherwise been silenced. Clare said the technique aims to remove the barrier of theatricality and emphasize the relevant issues within the play.

“The fourth wall does exist in Shakespeare,” Clare said. “But it is behind the audience, enclosing them. There is no barrier between the performers and the viewers, and that helps enhance connection and raise real contemplation.”

Other characters also directly address the audience in the play, Clare said. Thersites, for example, embodies the destructive nature of chivalry and honor codes, essentially personifying toxic masculinity. Through addressing the audience, he said the significance of the cynical warning lines extends beyond the breadth of the play and gains traction in modern life.

The difficulty of thematics and performance was part of the challenge that initially attracted Clare toward staging this play. Shakespeare’s plays are all relevant to modern life, Clare said, but streamlining the convoluted original work was difficult. Despite challenges, Clare said the performers have created a complete work that successfully marries stories of the old world into events of the new.

“You don’t conquer Shakespeare’s plays,” Clare said.”You don’t master them. As in mountaineering, you engage with the texts, within the time and with the resources you have, for the sake of doing that. And you share that work with the audience. And that’s all there is to it.”