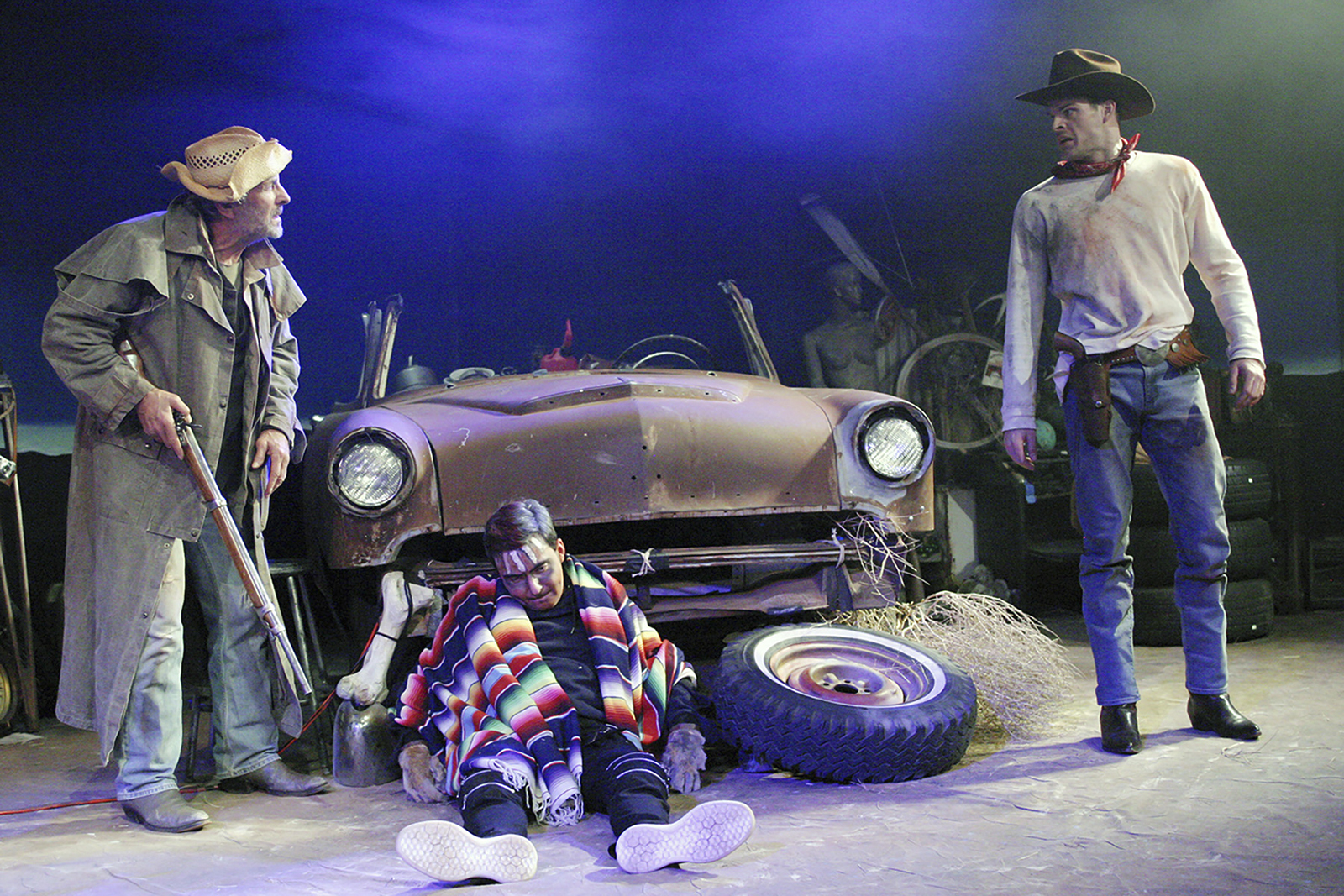 Carl Weintraub, Matt Curtin and Jordan Morgan star in a revival of the play “The Unseen Hand,” which cowboys, aliens and high school teens who attempt to free a futuristic alien race from slavery. Alumnus Curtin said the play explores the concept of toxic masculinity. (Courtesy of Enci Box)

Alumnus Darrell Larson is directing a revival of the 1969 play “The Unseen Hand,” and he said he hopes to revitalize its eccentric humor and commentary for a modern audience.

The play, originally written by Sam Shepard, runs at the Odyssey Theatre until March 8 and features alumnus Matt Curtin, who stars as Willie the space freak, a baboon-descended alien with paranormal powers. He recruits the help of three cowboys and a teenager to free his race from slavery, and Larson said he hopes audiences will resonate with the deeper message underneath this absurdist situation. The masculine facet of Curtin’s character in particular is heavily influenced by his own personal quirks and baggage.

“I hope that (the audience) will walk away with a more nuanced understanding of what toxic masculinity is,” Curtin said. “It’s always been with us and will continue to be with us unless we – specifically men – take responsibility for ourselves and our own development.”

Willie hails from an alien society that represents the extreme end of such toxic masculinity, and Curtin said bringing his alien character to life requires getting into a head space of a being that does not really exist. However, he said the script’s vague, nonhuman descriptions allow for a greater creative freedom and eccentric strategies to immerse himself in the role. One such tactic, he said, involved putting on a random playlist and screaming the lyrics as he drove to rehearsal to shake out any preconceived notions of his character as a socially aware human being.

Curtin also paid close attention to the technical details of his role by researching and incorporating baboon- and apelike behaviors into the character’s speech pattern and physicality. He said he would often practice these movements by walking on his knuckles at home and the gym. But beyond the challenges of monkeying around, Curtin said he also had to memorize nonconventional dialogues featuring long sections of nonsequential and even backward speech.

Additionally, Carl Weintraub, Curtin’s co-star, said it was impressive to see the passion and energy he brings to the table, even when faced with such difficult lines. Curtin’s convincing performance, Weintraub said, made it easy for him to be fully engrossed in the dialogue and to convey a more genuine sympathy to the alien’s plight.

However, these extraterrestrial qualities are not the only defining features of Willie, Curtin said. The character’s realness and complexity is derived from an amalgamation of his society’s cruelty and humanlike sentiments.

“What stuck out to me was how much I respected him as easily as I did,” Curtin said. “(Willie) has a way of viewing the world and his own place in the world that is – in my mind – very compelling and sympathetic.”

However, the relative free reign Curtin has in expressing his character does not translate to the rest of the play. Much of the play’s visual elements stayed true to the source material, with minor adjustments made to the alien’s wardrobe, so as to reflect a more modern idea of futuristic fashion instead of the ’60s version of chrome, sparkles and green makeup, Curtin said.

Beyond that, Larson said almost everything – from the stage directions to the set design – adhered strictly to the original vision. But there was one particular liberty that Larson took with regard to the high school teen’s resolution at the end of the play. Though the character’s sexuality was never explicitly stated, the fact that he was a male cheerleader in the ’60s and was physically violated heavily implied that he was gay, Larson said. He felt that it was an oversight to leave the teen frozen on the set in the original script while the other characters left the stage to explore their newfound freedom, he said.

“I believe that making that kid stand up, dusting him off, and sending him on his way to the future without shame and acceptance of himself is what (Shepard) would have wanted,” Larson said.

Furthermore, Larson’s close professional relationship with Shepard provided a solid sense of the playwright’s personal values and the recognition that his plays are living beings capable of adapting to the times. Modifying the teen’s ending in this way similarly reflects the changing culture and specifically the gradual normalization of minority rights.

Nevertheless, the original script invokes a lot of modern sensibilities in spite of these subtle modifications, Curtin said. The unseen “hand” that is controlling Willie’s race relates to the very same socializing agents in our modern society, which Larson said enforces a rigid standard of acceptable thought and behavior. And specifically, the play’s depiction of uninhibited violence and aggression as traditionally accepted male qualities is still very much prevalent in today’s world. Curtin said Willie is, in a sense, the embodiment of where society will end up if masculinity continues to be derived from a place of unfeeling brutality and cold logic.

“Violence leads to more violence,” Curtin said. “And it’s only at one point when we realize that we have the power and the responsibility to take ownership of the fact that we can choose to stop violence or not.”