The Quad: Peeling back the ripe history of a pair of Westwood fruit truck owners 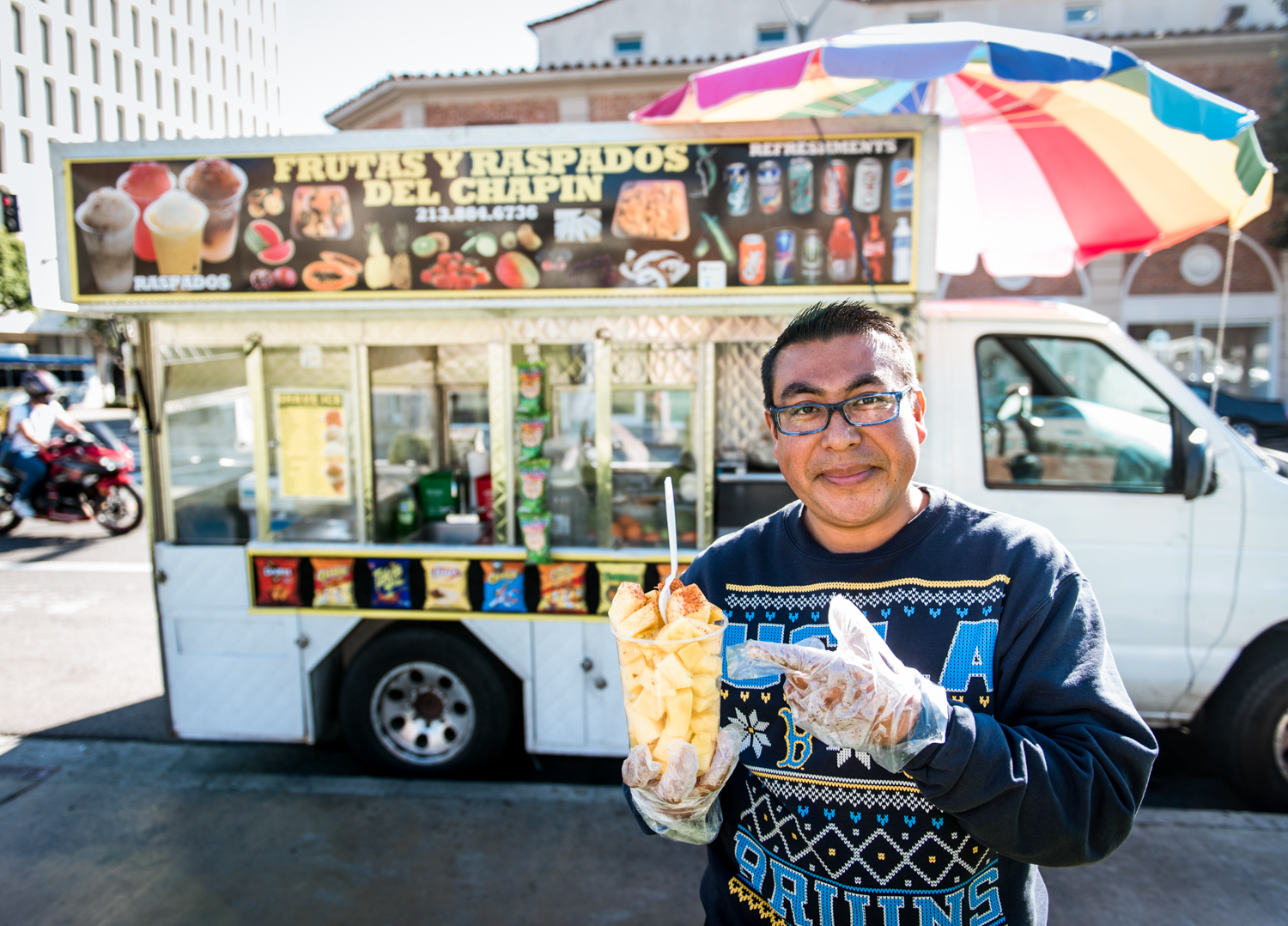 Fredy Agustin has been serving fresh fruit to customers on the streets of Westwood for ten years, in his truck called Frutas y Raspados del Chapin. The truck is one of many in a collection of fruit trucks owned by different members of Agustin’s family.
(Kanishka Mehra/Assistant Photo editor)

On my way into Westwood for an errand run last Friday, I stopped and chatted with two of the friendliest people in the Village.

Many Bruins pass by these friendly faces standing beside their fruit trucks without a second thought, but I wanted to learn more about the folks who set up shop on the streets of Westwood every day.

I first met with Fredy Agustin, from Frutas y Raspados del Chapin, who called himself “Freddy Krueger” as he giggled and gave me a container of fresh mango. A block down the street, Israel Sanchez smiled at his customers as he handed them fresh Mexican corn from his food truck’s window.

Agustin’s home country is Guatemala, where the “del Chapin” portion of his truck’s name originates from: “Chapin” meaning Guatemalan.

I’ve been visiting this truck for a few months now, and I know that Agustin always starts by making jokes about us students needing to calm down and relax a little. He also never fails to leave me with a “God bless you.”

After Agustin and his wife divorced over 10 years ago, he found himself searching for a sense of community.

“When I lost my job in 2010, after my divorce, I lost everything. I had no money in my pocket,” Agustin said. “My two kids are living with my ex.”

Agustin had no legal papers at this time, and finding work presented a stark challenge. But he wasn’t planning on giving up.

He wanted to move to a place bustling with people to strengthen his business and build a healthier, happier community. He had a feeling that UCLA could be the perfect spot, so he brought his small cart of fruit to a small Westwood pocket outside of Ronald Reagan UCLA Medical Center on the corner of Le Conte Avenue and Westwood Boulevard.

Frutas y Raspados del Chapin is one of many in his family’s mini fruit truck empire. Agustin and his brother, uncles, nephews and sister started trucks together in Venice Beach, Santa Monica and Westwood. However, it is the UCLA truck that helps Agustin provide for his whole family, while still keeping prices accessible to students on a budget.

Agustin lives by the motto, “You help me, I help you.” This mindset has taken him and his family of fruit sellers far and has made him countless friends in Westwood.

“The people are very happy, so I am happy. … I have a lot of friends here,” Agustin said. “I am thinking for the people. I like when they are very healthy.”

One of his many friends is a second-year linguistics and psychology student Denisa Tudorache.

“There was this one time when I was walking by his truck, and he dropped some mangos,” Tudorache said. “I helped him pick them up, … and he was kind enough to offer me a whole container of mangos with Tajín.”

While the restrictions of divorce and immigration laws resulted in real setbacks for Agustin’s career and life, he still treats people with the biggest heart, said Tudorache.

“(Agustin) gave me mangos, I shouted his truck out on my Instagram so that people would come to his business,” Tudorache said. “(He) made me want to help him because that’s the type of person he is. His kindness is contagious.”

I couldn’t help but agree as I watched Agustin prepare my order, cutting up fresh mango with ease, pouring it into a generous plastic container, and topping it all off with plenty of limón and Tajín. He joked about me needing “un doble shot of tequila” with my limón and handed me the cup.

My second stop is down the street from Agustin’s truck to meet Israel Sanchez. Sanchez’s truck is “El Rey De Las Frutas,” or The King of Fruits.

Sanchez may be the king, but he definitely shares the crown with his wife Norma inside the truck, which is located next to Chick-fil-A on Westwood Boulevard. The truck’s success clearly stems from a team effort, with the duo working together to get the fruit order in your hand in minutes – the king and queen of fresh fruits.

According to Sanchez, there’s no mystery behind the truck’s long-running success in Westwood – Sanchez said his regulars have been coming back for his fruit for years.

Sanchez’s business, much like Agustin’s, didn’t start as a large, bustling truck. He started his business with a small cart on the street six years ago.

“When I started in this spot, I started with a little cart,” Sanchez said. “I think three years ago, the health department changed the rule. We couldn’t (use) the little cart because of contamination.”

Sanchez was set on staying in this spot because of the regular customers and trusted business along Westwood Boulevard, and, in general, this spot made him happy.

“I’m happy because I make a business and take care of my family,” Sanchez said. “At the same time, we try to keep people healthy.”

Sanchez, determined to stay in the location that made him and his customers happy, adopted a new system with a more sophisticated vehicle to meet food industry regulations.

As for future plans, Sanchez is happy to stay where he is over the next few years. However, he does hope to open up another truck around LA in the next three years.

For a decade, Agustin and Sanchez have watched Bruins walk, run, struggle and succeed in Westwood. They have seen it all, and at the same time, built a community by means of a $5 cup of fruit.

“Obviously the fruit makes people happy,” Tudorache said. “But it is just as much the human interaction that lifts spirits and brings me back to buy fruit once a week.”