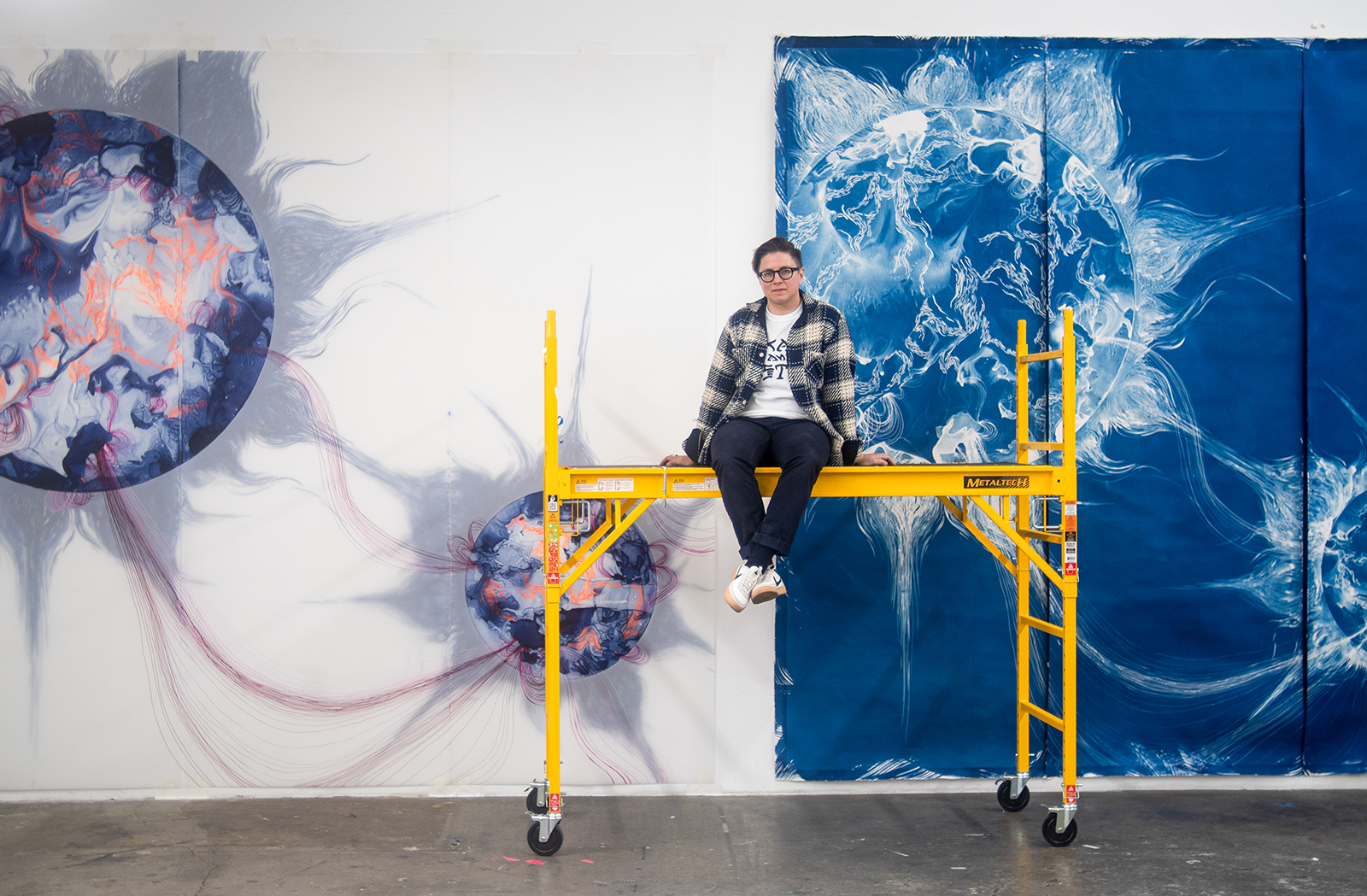 Her diverse studio practices simply follow her personal curiosities, which she said often land her in interdisciplinary spaces where she can warp and manipulate concepts of space and time.

The alumna most recently experimented with spatial distortion through an audio-visual installation called “Lia Halloran: Double Horizon,” on display at the ArtCenter College of Design’s Peter and Merle Mullin Gallery until March 15. Her eight-minute video, edited in collaboration with Garret Hill, presents the Los Angeles urban landscape through a disorienting lens, as Halloran said she mirrored aerial footage of the city into an immersive experience.

“(The title ‘Double Horizon’) comes from this notion that … the horizon has been a way to locate oneself,” Halloran said. “To basically turn it into a kaleidoscope is this notion that the more you look for a way to understand where you are, the more dislocated you get, and the landscape folds in on itself.”

“Double Horizon” conceptually began when Halloran said she was inspired to pursue her dream of getting a pilot’s license after a frightening car accident. What started as a memoir of her solo flights turned into an art piece, the artist said, as she recorded over two years of footage on GoPros and cameras attached to the plane’s exterior. The audio-visual piece – which plays on three suspended screens in the Mullin Gallery – also projects a hypnotic soundtrack to merge her personal flight with the viewer’s journey, said Halloran.

To manipulate the emotional impact of “Double Horizon,” she partnered with composer Allyson Newman, comparing notes throughout the monthslong editing process. Newman said she synthesized the plane’s sound directly from Halloran’s footage and mimicked jumps in pitch at points in the flight path. The emotionscape of the video commences with a nervous excitement of flutes as the plane lifts off, and then it takes on an intensity of plucking violin strings as the flight approaches Downtown Los Angeles, said Newman. The tall buildings of downtown resembled chomping, gnashing teeth when mirrored, Halloran said, so when Newman scored the flight experience, she tried to evoke a mixture of exhilaration and terror.

The journey of “Double Horizon” is one guided by the artist herself, as the piece acts both as a video portrait of Halloran’s flight experience and as an homage to Los Angeles, said Julie Joyce, senior curator of exhibitions at the ArtCenter College of Design.

“All of (Halloran’s) work, in a way, touches on this sense of exploration,” Joyce said. “When she explores that particular landscape on the other side of Catalina … for me, as an Angeleno, being able to experience this landscape in a completely different way is both foreign and familiar.”

Halloran said her interest in warped perspectives of everyday environments is paralleled in her photography series, “Dark Skate.” These images captured her moving through urban terrains, such as the dry LA riverbed, and have been taken in cities such as Detroit, Vienna and Miami. Halloran said she skateboarded at night with a light attached to her wrist, as the camera’s long exposure gathered light on the film. Thus Halloran’s illuminated path is represented in the darkness, but her body remains invisible, allowing her to “haunt” the image, she said.

“Adding this sense of motion, it’s a very intimate thing, because in both the ‘Dark Skate’ series and in ‘Double Horizon,’ I am the performer,” Halloran said. “I’m the skateboarder, and I’m the pilot. You do not expect a woman to have that kind of role so it’s also a subtle way of … looking at what our expectations of who is able to do what.”

Joyce said the artist’s exploration is not limited to our earthly terrain or horizontal landscapes, as four of Halloran’s cyanotypes – or photographic prints – representing outer space are presented alongside “Double Horizon” in the Mullin Gallery. Halloran’s astronomical 2019 cyanotype “The Great Comet” will also be featured in the ArtCenter’s upcoming February exhibit, “Sky.”

Physicist Kip Thorne said he began working with Halloran over 10 years ago to conceptualize cosmic phenomena. He said Halloran helped him visualize images of black holes and wormholes when he was a consulting scientist on Christopher Nolan’s 2014 film “Interstellar,” creating over 250 paintings based off his scientific writings.

“What I was struck by was … (her drawings) were almost Dr. Seuss-like,” Thorne said. “I wouldn’t say I learned any physics from it but rather I felt like I could see the spirit captured in a way that people who are not physicists like me could get some real sense of it.”

As for their current collaboration, Thorne said he and Halloran are working on a book about the intersection of art and science, featuring his poetry and Halloran’s paintings. Her work shows compelling aspects of the universe that may be counterintuitive or inspire people who have not been exposed to scientific concepts before, Thorne said.

“(In ‘Double Horizon’) you get a sense of the dynamics of it, … of the vastness of space,” Thorne said. “This warping of time and space is central to aspects of the universe that we’re only beginning to observe.”