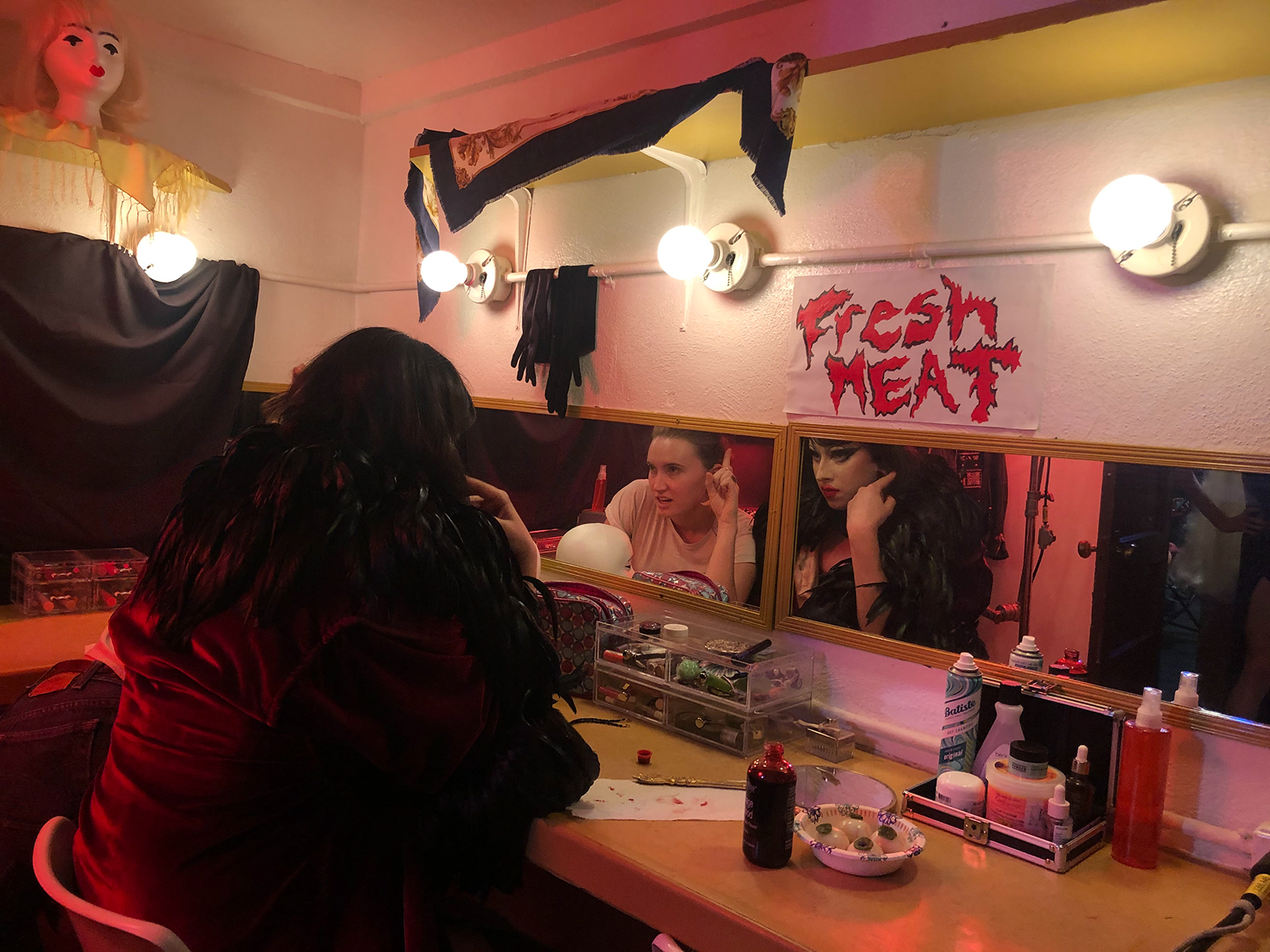 Marion Moseley, a fourth-year world arts and cultures student, created a short film that follows a quiet boy who transforms into a devilish entity upon assuming his “dragsona.” The film was inspired by campy horror and shock and uses similar aesthetics. (Courtesy of Julia Schreib)

Marion Moseley said she had many creative mouths to feed on set. One of which happened to be a bloodthirsty drag queen.

“Snatched,” Moseley’s short film, was initially written for a screenwriting class at UCLA, and it was filmed last weekend as her submission for the Campus Movie Festival, which will take place Thursday. The film covers the grotesque journey of a quiet boy, Quinn, who transforms into a devilish entity upon assuming his “dragsona,” Lucy Furr. Moseley, a fourth-year world arts and cultures student, said she was inspired by campy horror and the shock that director John Waters elicits from his audience in his films. Quinn’s own journey as a drag queen mirrors some of these horror aesthetics, she said.

“If people are upset watching drag, then make them really upset – just push it,” Moseley said. “The film has that John Waters element that’s above the law, campy, grotesque, pushing the limits of people.”

As someone who grew up watching horror films, Moseley wanted to subvert the genre’s typical brutalization of minorities through her filmmaking. Moseley said she had become uncomfortable when a minority figure would always be killed first in a gruesome manner. “Snatched” explores horror where gender is not a primary factor in the survival of a character, Moseley said.

Filming, which occurred last weekend, was funded by her and two other producers: Jemina Garcia and Julia Schreib. Despite her reluctance to occupy the role of director for the film because of the strictness of the role, Moseley said she was encouraged by her fellow producers, and she enjoyed her ability to control the finer details of her creative endeavor.

Moseley’s goal for the film was to explore her interest in grotesque, creepy and typically bloody aesthetics, but she said her main constraint to the creative process of filmmaking was ensuring that she could submit the film to CMF within a week. Despite these time constraints, Moseley said her production team made the filmmaking possible. Garcia, a fourth-year English and political science student who produced the film, said they assembled a team based on their trust in Moseley’s creative vision for the film.

“(We) didn’t want to compromise quality for something convenient,” Garcia said. “We were up until 3 a.m. (working). At the end of the day, what we ended up with was quite satisfying. I really learned from being with someone who wouldn’t compromise.”

But the constraints of CMF provided little room for maintaining this vision, Garcia said, as the festival requires students to film and edit in one week, which required sacrificing some of the original vision Moseley held. Schreib, a third-year psychology student, said that, despite an overall commitment to the storyline and aesthetic, CMF’s five-minute limitation forced the producers to cut scenes that they had initially wanted to include.

“We had such a vision for what we wanted (the film) to look like, but we had to cut scenes and lines because there’s the CMF time limit,” Schreib said. “It was parting with the exact vision that we had, taking a step away and just making it the best we absolutely could that was the hardest.”

However, Moseley said it was her commitment to her creative vision that initially attracted many of her crew members. She said while creative control was her main focus, she also wanted to make filming an enjoyable and human process. Moseley said she wanted to create an environment in which people enjoyed working with her by being kind and honest about filming issues. In order to do this, Moseley said she cooked food for her crew members and ensured that all of the crew had up-to-date information.

Despite technical setbacks, Moseley said that the experience of producing the film alongside Garcia and Schreib had been a rewarding one of creative value because of their ability to collaborate with each other with little help from school organizations. While Moseley said she may not have asked for such a complicated experience, she feels that the filming has kick-started a creative drive that will be with her for the rest of her life.

“When (art) is such a tool of self-care, everything that you make becomes inherently a part of you,” Moseley said. “It’s a part of these tools for sanity, and those are reflections of yourself.”