Battle of the Editors: Which Bruin athletes would find the most success when competing for another sport? 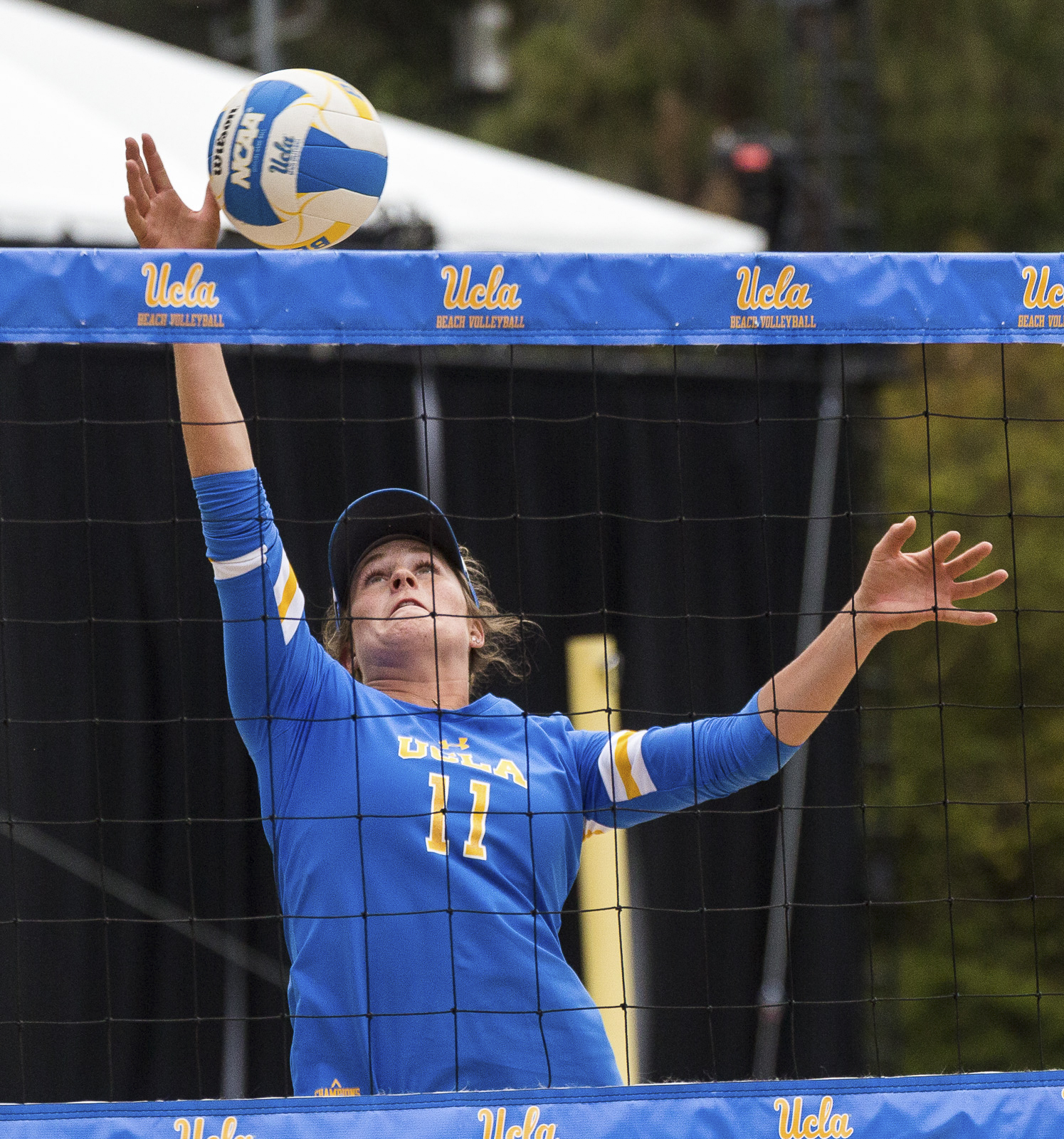 As winter sports are midseason, and a slew of spring teams will begin their slates in the coming weeks, the Daily Bruin Sports editors offer their takes on how all the active rosters could be mixed and matched. Whether the deciding factor is height, speed or strength, read which athletes would have the most success as a member of another team.

Watching Savvy Simo compete for UCLA beach volleyball is kind of like watching a floor routine in Pauley Pavilion.

The senior’s sudden bursts of movement, the way she tumbles to the ground and springs back up, and – most importantly – her facial expressions that steal the show all resemble UCLA gymnasts when they take to the floor.

There’s no question that Simo can get enough air for a flip or two, as she’s spent multiple seasons as a split blocker. And while her 5-foot-10 frame might not be ideal for a back tuck, her ability to traverse an entire court through dives and rolls indicate that her floor work would be a sight to behold.

Another part of being a gymnast is being OK with falling to the ground again and again, while mastering new skills. Simo has shown her physical resilience both on the sand and the indoor court, making body-sacrificing dives without hesitation.

Finally, Simo’s in-match facial expressions and point-by-point celebrations make her notoriously the most animated player on any court. Spectators would be hard-pressed to take their eyes off her while she strutted around the mat.

If Simo could find any time between her indoor and beach volleyball schedules, a quick stint with gymnastics might be the perfect way for her to round out her resume.

Before UCLA men’s basketball’s game against Utah on Sunday, equating Jaime Jaquez Jr. to a football player wouldn’t have made much sense.

But when Ute guard Rylan Jones tried making a 50-foot inbound pass from under the Bruins’ basket, Jaquez Jr. tracked it down and caught it in stride for the steal.

The freshman guard/forward got wrapped up and intentionally fouled right after hauling it in, but he held onto the ball and wound up hitting both flagrant-foul free throws. Jaquez Jr.’s nose for the ball, his ability to absorb contact and his sturdy 6-foot-6 frame were all on display, and they combine to make him a great candidate to be UCLA football’s next great wideout.

UCLA has three receivers and three tight ends listed at 6-foot-5 or 6-foot-6, but Jaquez Jr.’s 215-pound frame makes him much more akin to a receiver. He would be a physical receiver for sure – he brings a certain toughness to the table because of his experience as a power forward and willingness to put his body on the line.

Jaquez Jr. doesn’t have the highest vertical leap on UCLA men’s basketball, and he isn’t the tallest either. Some of his teammates would surely be bigger or more shifty targets on the gridiron, but he just seems to fit the role better than anyone else.

His intangibles – in addition to his perfectly adaptable build – set Jaquez Jr. up perfectly to make the switch to football if he ever wanted to make the transition.

Take a look at the men’s tennis team and it’s easy to spot Keegan Smith.

The junior for UCLA men’s tennis towers over the rest of the team with his 6-foot-7 frame, his height allowing him to dominate opponents with his serve. Together with then-senior Maxime Cressy – who also stands 6-foot-7 – Smith won the 2019 NCAA doubles championship on the back of dominant serving, never dropping a set along the way.

And while his height has given him a significant advantage on the tennis court, it also would bode well for him with the men’s volleyball team on the court of Pauley Pavilion.

If Smith joined Bruin volleyball, his above-average height wouldn’t be so unusual anymore. While most of the opposite and outside hitters are around Smith’s height, he may still be too short to play at the blocker position.

If he did end up playing blocker, Smith would have one thing going for him – his reaction time. In doubles, Smith is asked to hold his ground at the net, volleying his opponents’ shots that come at him with considerable speed. Though it’s inevitably different in volleyball, Smith could definitely get up to make a block on an opponent’s spike. Relying on fast hands to return an oncoming ball is what Smith does every day on the doubles court.

At the very least, he wouldn’t be worried about being hit in the face with an oncoming shot.

But the position Smith would most likely succeed at on the volleyball court has to be as an opposite or outside hitter. Generating power for a spike might not be all that different from Smith’s motion to serve a tennis ball – just as Smith blisters tennis balls into his opponent’s service box, he shouldn’t have a problem hitting a volleyball down into the opposing court.

Smith’s leaping ability remains to be seen. It’d be hard to say if he can leap as high or sustain that motion over at least three sets of a volleyball game.

But, if there’s one current athlete that men’s volleyball coach John Speraw could add to his roster, it might as well be Smith.

At least Speraw would be able to say he has an NCAA champion player inhabiting his roster.

While it would be easy to slot Daenan Gyimah as a basketball player considering he used to play it during high school, he would thrive in an event known for recruiting from other sports.

The senior has one of the best verticals on the men’s volleyball team and could transition smoothly to competing in the high jump for men’s track and field.

Gyimah is currently listed at 6 feet, 8 inches, one inch taller than sophomore jumper Sean Lee, who currently has the fifth-best high jump in UCLA outdoor history. Lee’s jump of 2.21 meters last season could be in range for a player who is constantly outleaping both teammates and opponents.

The biggest transition for Gyimah would be the switch from having to leap 100 or more times in a match to going all out on a few jumps during a track meet. He would also have to learn to contort his body in just the right way, but the former multisport athlete has the jumping power to make him a viable candidate.

In a year in which UCLA track and field is trying to break Oregon’s 13-year Pac-12 title streak, they could use the potential that Gyimah brings to help jump over the competition.

While UCLA women’s basketball is handling itself quite well already this year, ranking in the top 10 nationally, even the best teams can often use some help on the physical side.

Sophomore Megan Faraimo of UCLA softball stands at 6 feet in the pitching circle, a full head above some of her teammates. She currently uses her wingspan and long legs to hurl 65-plus mph pitches at opponents, but that size could also be used on the court in Pauley Pavilion.

Junior forward Michaela Onyenwere said at the beginning of the basketball season that after last spring’s graduation of two 6-foot-1 starters, the Bruins would have to adjust to being a smaller-than-average team. The addition of Faraimo would add that needed height to UCLA’s roster.

As Faraimo played volleyball and softball in high school, some of the skills from both sports could give the sophomore an advantage on the basketball court. The quick reflexes softball players develop to grab grounders and line drives would translate as a talent for causing turnovers, and her strong arm would give Faraimo a chance to make some shots from the 3-point line.

Faraimo’s experience as a middle blocker would allow her to excel on defense for UCLA, as she’s used to keeping her hands up to defend balls coming from opponents and could also use her vertical range to block shots.

While she might have an issue with making the Pac-12 basketball tournament in the middle of the softball season, Faraimo would otherwise make a quality addition to the Bruin squad.