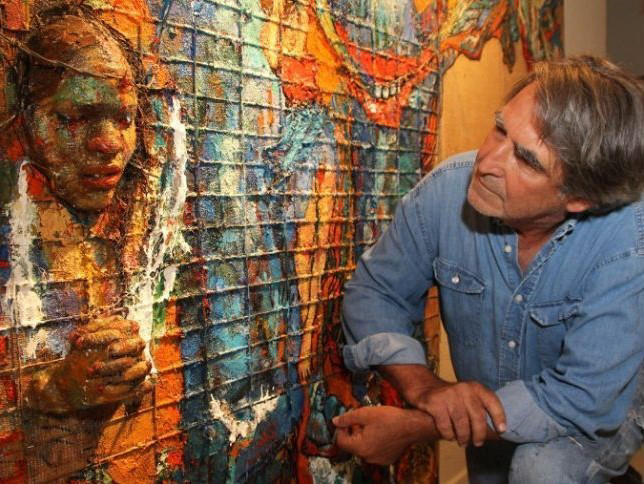 Mark Strickland is among the artists whose work is featured in UCLA Hillel’s winter exhibition. He said his portion of the exhibit explores the human condition through the connections between heaven and hell as well as between fear and desire to show the good and bad sides of humanity. (Courtesy of Ivan Mejia)

Instead of shying away from pain and suffering, the alumnus said he utilizes his emotional responses to such events to inspire his artwork. This method forms the basis of many of his pieces which will be featured in UCLA Hillel’s winter exhibition which opened Thursday. Combining his psychology degree with his career in the arts, Strickland said he bridges the gap between the two often distant fields by creating pieces influenced by the human psyche. His work, alongside that made by other artists, creates an exhibit that is meant to draw attention to stories of resilience and unity, he said.

“I always wanted to do something humanitarian,” he said. “And in this show, I’m trying to depict how to heal a wounded world.”

Strickland’s portion of the exhibit is entitled “Between Heaven and Hell, Fears and Desires” and explores the human condition through these titular intersectional elements. Heaven and hell connect with fear and desire because both are choices people make, he said. Strickland chose to illustrate this contrast because he believes there to be both good and bad sides to humanity, and he said he wants people to examine this dichotomy.

“Fear is like a hand crushing the heart,” Strickland said. “When people are in fear, when they have desire and greed, they have trouble feeling, and I want to bring those feelings back to life with my work.”

One of Strickland’s pieces in the show, a 15-foot mural entitled “The Choice,” is a reflection of his humanitarian efforts. Perla Karney, artistic director of The Dortort Center for Creativity in the Arts at UCLA Hillel, said the piece argues that even when faced with trials, people have the agency to choose how they shape their futures depending on their decisions. The mural’s subject matter forces its viewers to contemplate the dualities of humanity and understand that there is always an option to choose a positive path, she said.

“(Strickland) has an unbelievable empathy for the tortured people of the world,” Karney said. “All of these global conflicts touch him in a deep way. His soft heart and strong aura are reflected in his work.”

While Strickland focuses on global history, Susan Cooper, another artist whose work will be featured at the exhibit, brings a more personal story to life. Through her multimedia creations, she said she homes in on her family’s past.

Her project, “Story Line: My Family’s History,” is a series of installations that follow the journey her family took from Poland to the United States during World War II. The exhibit includes 40 bronze figurines she created of synagogues, homes and vehicles alongside the same images crafted out of neon plexiglass. The contrasting mediums allow her to depict her family’s story through multiple lenses, Cooper said.

“The story of the Holocaust can never be told too many times,” she said. “All people should remember what it meant for immigrants to come to this country from a place of absolute terror.”

She first began the project in 2017, around the time of the violent Charlottesville, Virginia, protests. She said the artwork she was creating felt especially powerful because of the period full of political strife that surrounded it. Since there has recently been a resurgence of political unrest, Cooper said the retellings of historical events such as the Holocaust and protests have become even more important.

“The story (of the Holocaust) is a common one, but everyone’s version is different,” she said. “These problems have only been amplified. I want to keep my family’s story alive while also connecting it to immigration issues today.”

The two parts of the exhibit are united in the artists’ powers of storytelling, Karney said. And although they each have clear objectives with their art, Strickland said he does not create intentionally political messages.

“I never take sides,” he said. “I’m not for or against anybody, and I’m simply trying to convey the truth through art. I just really care about human beings.”