The Quad: Once USAC collects student fees, what does it do with them? 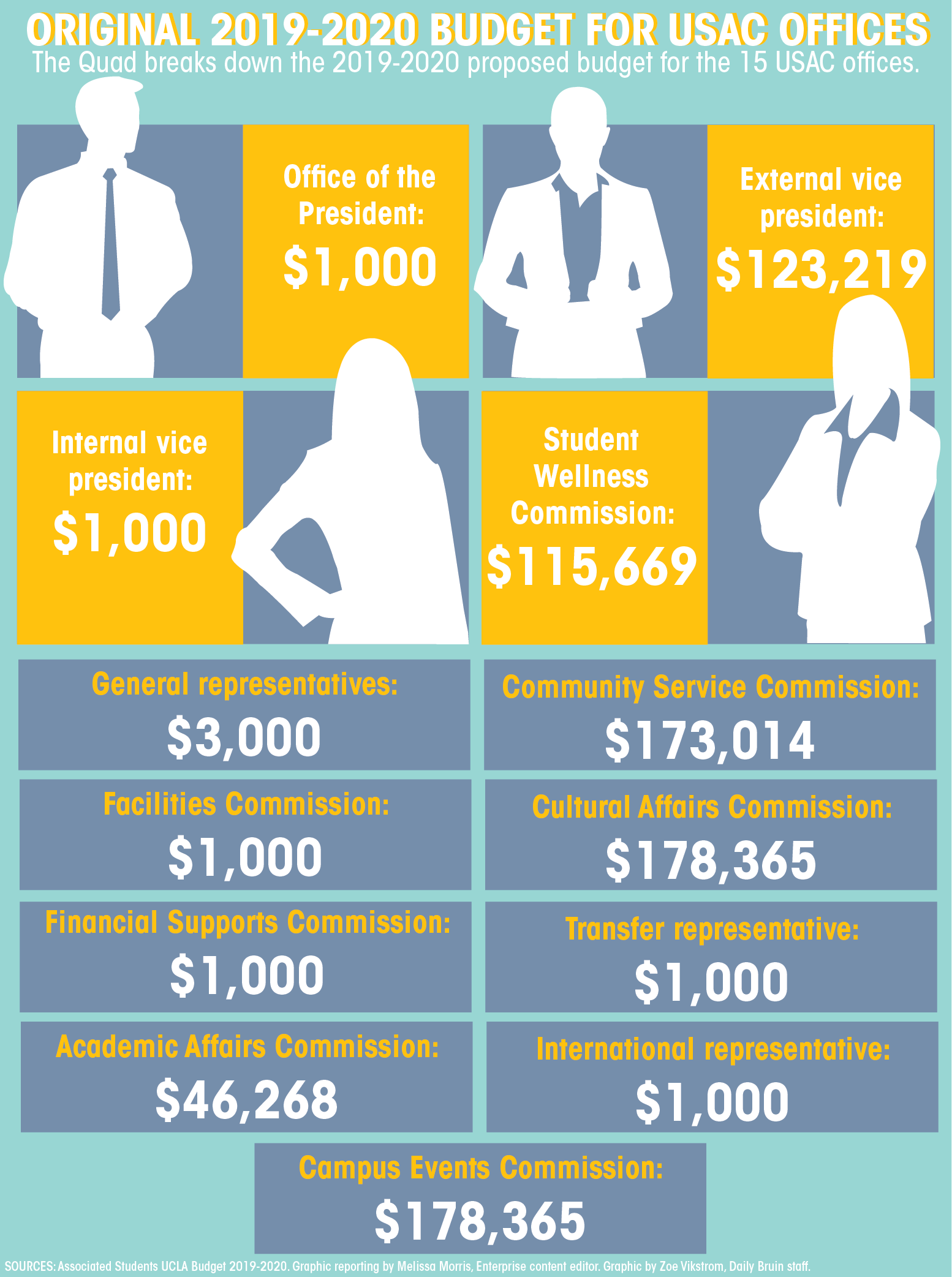 Firstly, what is it?

USAC is UCLA’s undergraduate student government, and that leads us to a follow-up question: Why should I care?

Judging by the 16% voter turnout in the spring USAC election and a displeased discussion on Reddit, the answer might be that students simply don’t care.

Students took to Reddit to show their dissatisfaction with USAC’s multimillion dollar budget after the Daily Bruin reported this month that over $2.5 million allocated from Social Justice Referendum fees to the Community Programs Office is unaccounted for.

Reddit discussions aside, what do the various USAC fees on your tuition bill actually mean? We’ve prepared an overview of the USAC budget to show students where the fees they pay each quarter are going.

If you check your BruinBill, a roughly $85 “UNDERGRAD STDNT ASSOC FEE” charge should pop up. This charge is the money that you contribute directly to USAC every quarter. That’s not to mention the smaller fees that are allocated to USAC for specific initiatives, like the Bruin Bash Fee, Green Initiative Fee, Arts Restoring Community Fee and more.

Over four years, a UCLA student will pay over $1,000 to USAC. As involuntary investors into USAC, it’s worth thinking about if you’re actually getting $1,000 worth of services from our student government.

From the contributions of tens of thousands of undergraduate students alone, USAC is already a multimillion dollar entity. Throw in the money it receives from its endowment and other revenue streams, and USAC becomes the massive campus entity we know today.

According to its December financial reports, USAC has an operational budget of nearly $9 million.

So let’s run through some highlights of where USAC spends its money. More detailed expenditures from this academic year are also made public on USAC’s website for your perusal.

If you or one of your student organizations have ever applied to any of these funds, you’ve tapped into USAC’s resources. One of the main functions of USAC is to reimburse students for their own events and expenses through its various programming funds. These can be either office-specific, like the external vice president’s Bruin Advocacy Grant, or general to USAC, like the Contingency Programming Fund.

USAC offices also offer their own events and services. These range from events as large as Bruin Bash, held by the Campus Events Commission, down to smaller, get-to-know-you events with attendance hovering around six or seven students.

When students vote to approve referendums during USAC election season, the money generally has a specific destination. On its way, it passes through USAC for allocation. As a disclaimer, the Communications Board, which oversees the Daily Bruin, receives $3 per student per quarter in fees from one such referendum.

For example, the Social Justice Referendum, which students passed in May 2016, increased student fees to fund the CPO Food Closet, the Campus Retention Committee, the Academic Advancement Program and more. Once the money leaves USAC’s hands, it belongs to these programs.

Money also goes to USAC itself.

With such vast quantities of money involved, it’s easy to get lost in the details.

One thing is for certain, however: USAC runs off your money, and that means you should have a say in how it gets spent.