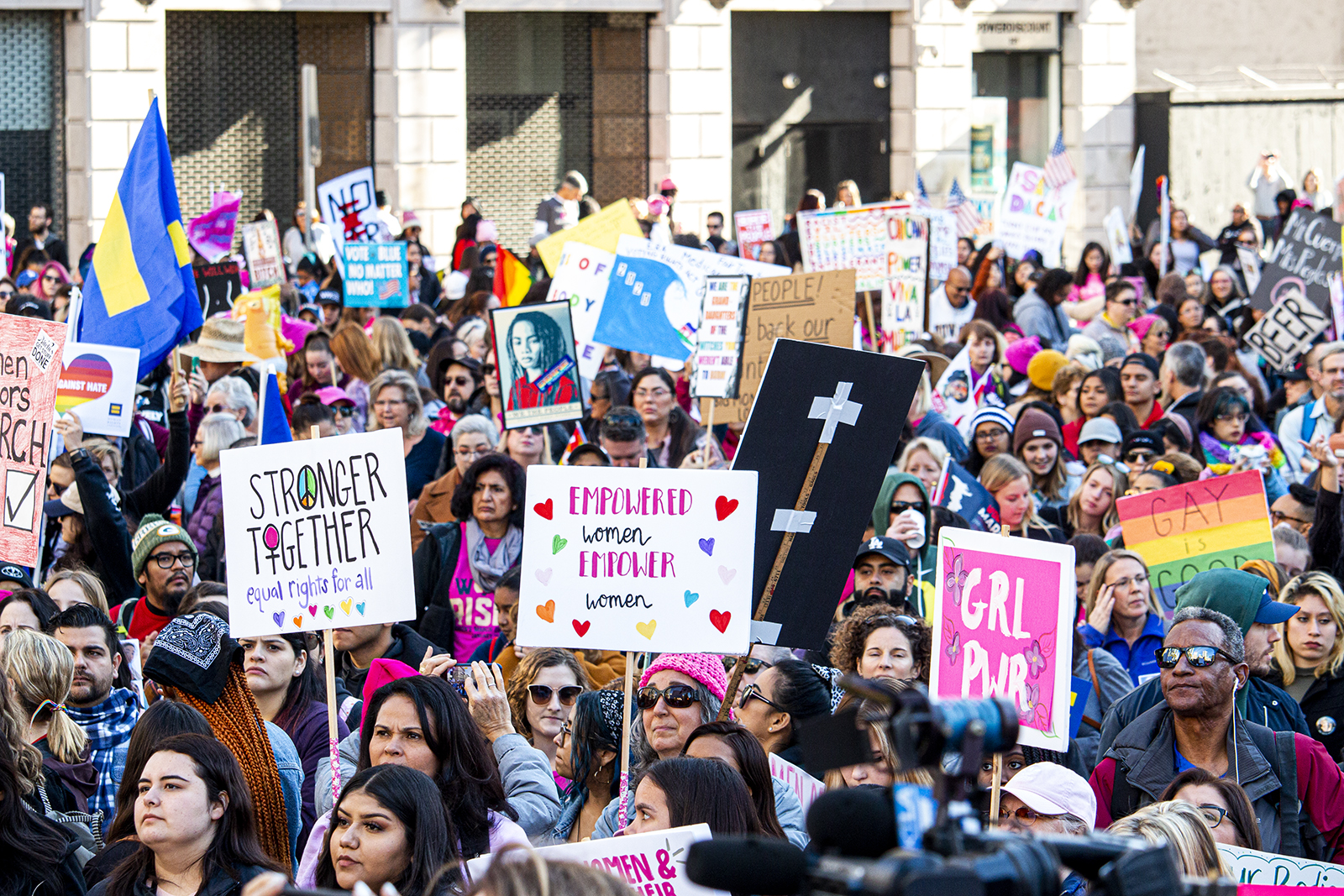 Signs with jokes, swears, female empowerment slogans and more floated above the heads of about 30,000 people who attended the fourth annual Women’s March in Downtown Los Angeles. (Christine Kao/Daily Bruin)

For the fourth time, thousands of Angelenos marched through Downtown on Saturday to show their support for women’s rights.

In addition to the usual signs, ranging from jokes to swears to female empowerment slogans, the favored promotional materials of many marchers touted their 2020 Democratic presidential picks. Others simply called on the public to vote. Marchers also advocated for issues including environmental justice, intersectional feminism, LGTBQ+ rights, immigrant rights, racial justice, anti-war policies and proper compensation for labor unions.

Police on the scene estimated about 30,000 people attended the march. This is significantly lower turnout than in 2017 and 2018, which saw the first and second largest nationwide marches in U.S. history, respectively. Speakers at Saturday’s event included Rep. Maxine Waters, Los Angeles Mayor Eric Garcetti and LGBTQ+ rights activist Caitlyn Jenner.

Despite the smaller crowds, this year’s march attracted a new segment of the population. Several K-12 attendees reported that this was their first march.

Alexis Morales, a high school student from Woodlake, California, said while he is unable to vote in the upcoming election, he is more aware of issues the country faces today than in previous years. He said he plans to use his newfound enthusiasm to get those in his circle to vote.

Frances Muller, a middle school student from Altadena, California, said the march felt important to her, but that it was hard to pinpoint exactly why.

Her sister Grace Muller, who attends an arts high school in Los Angeles, suggested the added importance this year might be because the first Women’s March felt like a reaction to the presidency.

“This one can be the last one before change happens,” she said.

One such saleswoman, Josefina Fuentes, said she found that while the crowds drew some profit for her business, she was much more interested in the marchers’ message.

“I’ve always chosen to be at these marches,” Fuentes said. “I support all human beings, if it’s a man, woman, (LGBTQ+ individual). I respect everyone, all kinds of religions, all sexes.”

Fuentes, who prefers to speak Spanish, spoke to the Daily Bruin with the translating help of Women’s March attendee Karla Avila.

While Perez said she feels the “anyone-can-join” setup of the Women’s March is relatively inclusive, she added marketing for the event may lead people to believe that these marches are dominated by white feminist women.

“That’s why it’s important for us as women of color to be here, to represent,” Perez said. “We can come out and support because not just white feminist women care about the changes that are going to happen to our government.”

Maddie Brady, who has attended several Women’s Marches across the country in the last few years, said she feels these events are more important than ever in light of the 2020 election and changes within the government.

Brady also said she thinks there will always be people in government trying to restrict women’s rights, adding she is concerned about restrictions on abortion and women’s bodily autonomy.

Alongside Saturday’s marchers, counter-protestors shouted through bullhorns about sin and abortion. An anti-abortion march was also scheduled for later Saturday afternoon a few blocks away.

It is Brady’s hope that the country votes President Donald Trump out of office in November, but she added there will be more work and fights ahead, regardless of the election’s outcome.

“We now have four years of cleanup to do,” Brady said.