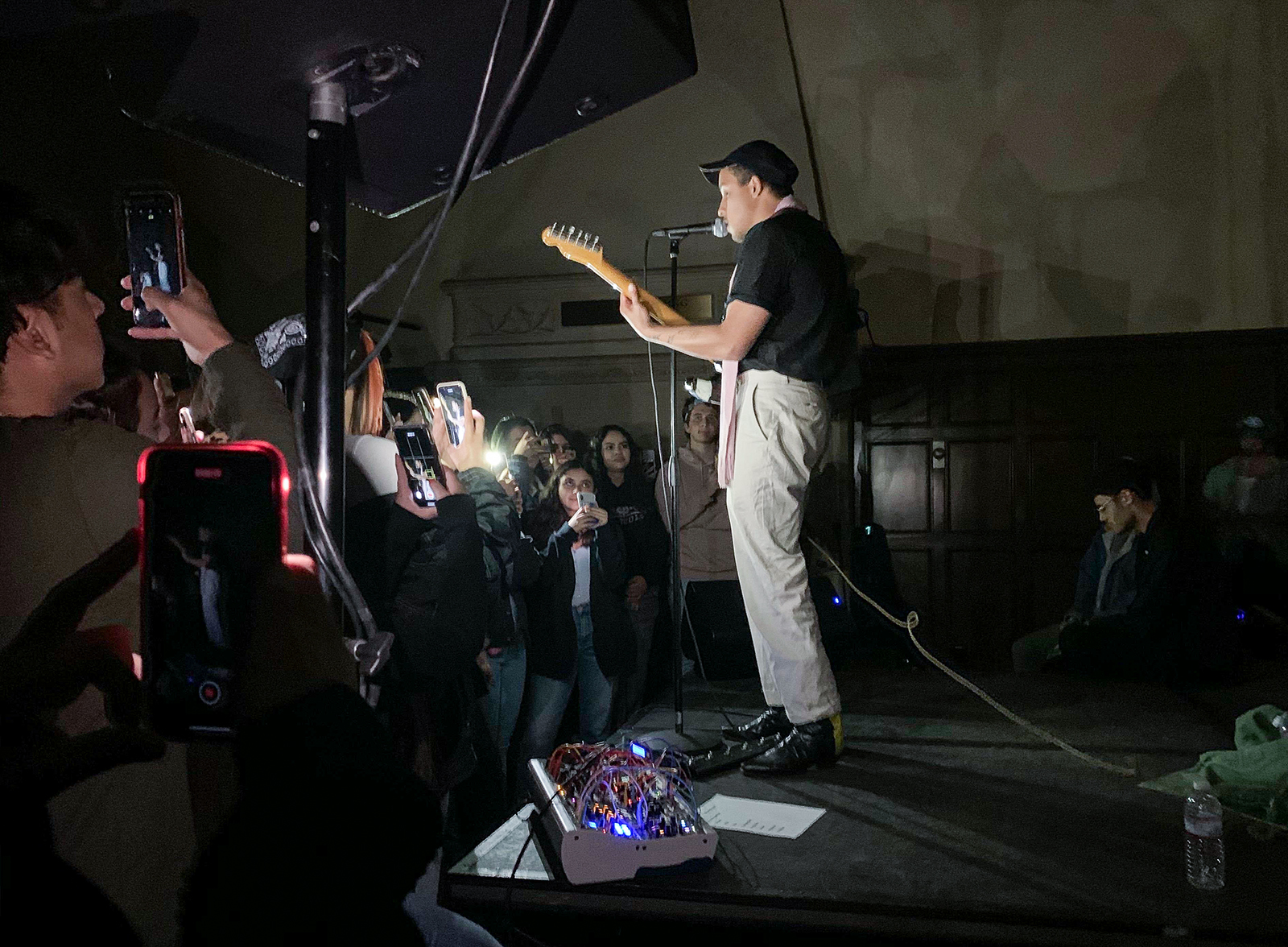 Up-and-coming artist Dijon performed at the Kerckhoff Charles E. Young Grand Salon on Tuesday night. While initially unsure about how the space would bode for the R&B concert, students who attended the event expressed that the small size made it feel more intimate.(Courtesy of Hannah Ferguson)

The singer – who inquired about the exact purpose of the room – was met by an audience member stating that the UCLA student body was equally unsure. The Tuesday night show was opened by Sachi, an indie singer from Philadelphia. Sachi and Dijon featured themes of love in their music, using different musical genres to tackle similar topics of strained relationships and not feeling worthy of a loved one.

The third-year cognitive science student said he had attended performances in Kerckhoff Grand Salon before. The small setting gives performers more opportunities to interact with audience members that they wouldn’t have in a bigger venue, Tinsley said.

Sachi opened the show with a sense of humor, skipping from his first song to the next on his set list after cursing and admitting he forgot the words. Laughing at himself, Sachi’s jam-like set featured some of his original songs in addition to those from his band, Joy Again.

The band’s fans sang along to Sachi’s songs that addressed universal anxieties about relationships and finding love. His lyrics were at times denigrating to himself, referring to himself as suburban trash in one song and continually asking his lover if she would keep him. Appealing to audience members’ experiences of feeling inadequate ⁠– while maintaining an upbeat acoustic guitar accompaniment ⁠– evoked bands like the Violent Femmes.

Though Sachi and Dijon’s lyrics covered similar topics, Dijon utilized heavy drum beats and saxophone on top of electronically generated noises. The lyrics matched Dijon’s high-energy movements around the stage as he interacted with his band members.

First-year undeclared student Jose Arizmende said the most profound moment of the concert happened during Dijon’s rendition of “Violence.” The singer almost screamed his lyrics, embodying the frustration and anger communicated in the words of the song.

His band members often mirrored his movement around the stage by undulating in time to the music while playing their instruments. Arizmende said watching the band members feed off each other’s energy let him see an honest moment of emotional connection and support that cannot be felt in the sound of the song alone.

[Related: Bruin Tea: How does CEC put on so many free events?]

Dijon’s external resonation with his music is why third-year political science student Michelle Fausto has been a longtime fan. Fausto said she has been listening to Dijon’s music for a year. The artist released his latest album, “Sci Fi 1,” in 2019. Fausto said she listens to Dijon’s music when she’s feeling reflective or in a melancholy mood, as his poetic lyrics and soothing, constant beats create a relaxing ambiance.

“He gives me bedroom-pop vibes … and evokes a nostalgic feel,” Fausto said.

During his concluding song, Dijon’s band members requested the chandelier lights – which had lit up his set – be turned off completely. Rather than letting the artist perform in total darkness, audience members turned on their phone flashlights so Dijon could see, casting shadows around the room. Arizmende, who has been a fan for over a year, said the live performance added to his already-high esteem of Dijon as an artist.

“I was already a fan, but (the concert) was an extra treat,” Arizmende said.