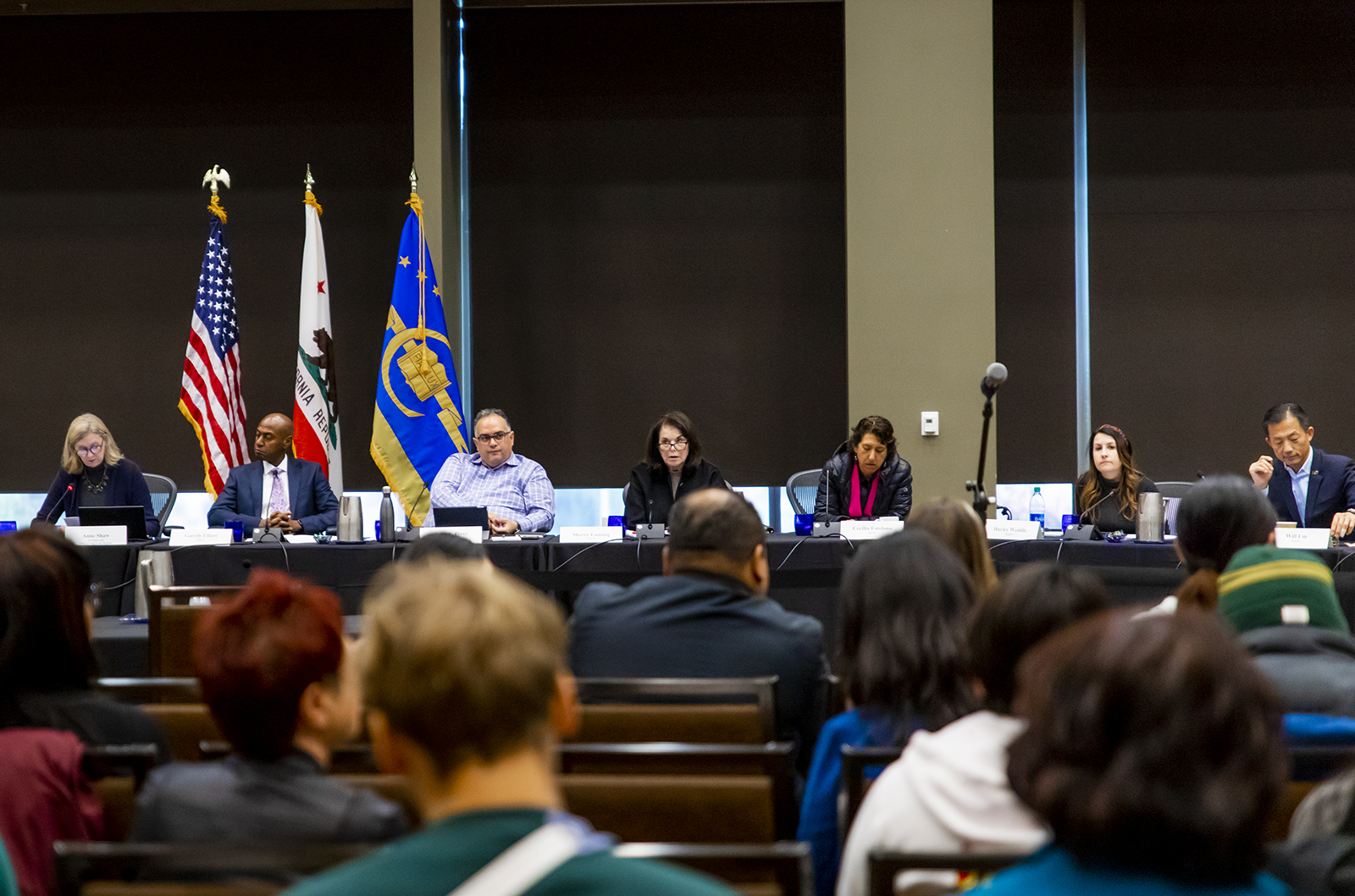 The University of California and College Futures Foundation hosted a forum Tuesday that allowed students, faculty and other education organizations to discuss what they would like to see from the next UC president. (Ashley Kenney/Daily Bruin)

UCLA students and faculty said at a forum Tuesday they think the next president of the University of California needs to pay attention to issues such as sustainability, inclusivity and accessibility.

The forum, which was hosted by the UC and College Futures Foundation, an organization that fights for equity and accessibility for college students, allowed students, faculty and various education organizations to voice their opinions to a special committee tasked with finding the next UC president.

UC President Janet Napolitano announced in September she will be stepping down from her position in August. The special committee was formed following Napolitano’s announcement to begin the process.

Frank Ramirez, founding board member of the Youth 2 Leaders Education Foundation located in Kern County, California, told the committee that he thinks the next UC president should work to improve the financial accessibility of the UC. Ramirez said the $10,000 yearly tuition that an average student is expected to contribute on their own in the current UC financial aid system is too high.

“I would like to see the next president place the development of more institutional-based financial aid programs that will help with the access issues of many Central Valley students who choose not to accept their offer of admissions due to financial obstacles,” Ramirez said.

Tina Treude, a professor of marine geomicrobiology at UCLA, said she hopes the committee will also interview candidates that care about sustainability and have specific plans to address the climate crisis. Treude added there is currently a petition from the UC San Diego community requesting that attention to the climate crisis be a standard in the search for the new UC president.

Ernesto Arciniega, a Hispanic languages and literatures graduate student and founder of the UCLA Hispanic Latinx Graduate Students Association, also urged the committee to consider issues of diversity and equity.

“It is not about fulfilling diversity quotas for the sake of numbers,” Arciniega said. “It is about looking for a leader with a larger social consciousness to truly commit to defending the voices of the voiceless.”

Alondra Avalos, a second-year sociology and labor studies student and a member of the Student Labor Advocacy Project of UCLA, said that under Napolitano, there was a lack of action behind words of support for undocumented students.

“We need a UC president that will speak with their actions and will help in turning the UC into a sanctuary campus, formally banning (U.S. Immigration and Customs Enforcement), (U.S. Customs and Border Protection), and other immigration agencies from entering campus,” Avalos said.

Justin Rodriguez, a second-year economics student, said he thinks the new UC president should overall make up for Napolitano’s shortcomings, such as by bettering working conditions for those employed on campus.

Monica Lozano, CEO of College Futures Foundation, said the foundation hoped to create a platform for diverse opinions by sponsoring the forum.

“We’re very committed to supporting educational leaders in California that are equity-minded, that understand the student experience and that recognize the role that the UC can play in social mobility for all Californians,” Lozano said. “That’s our agenda, and we hope to bring that point of view forward for those who will actually make the decision as to who is the next president of the University of California.”