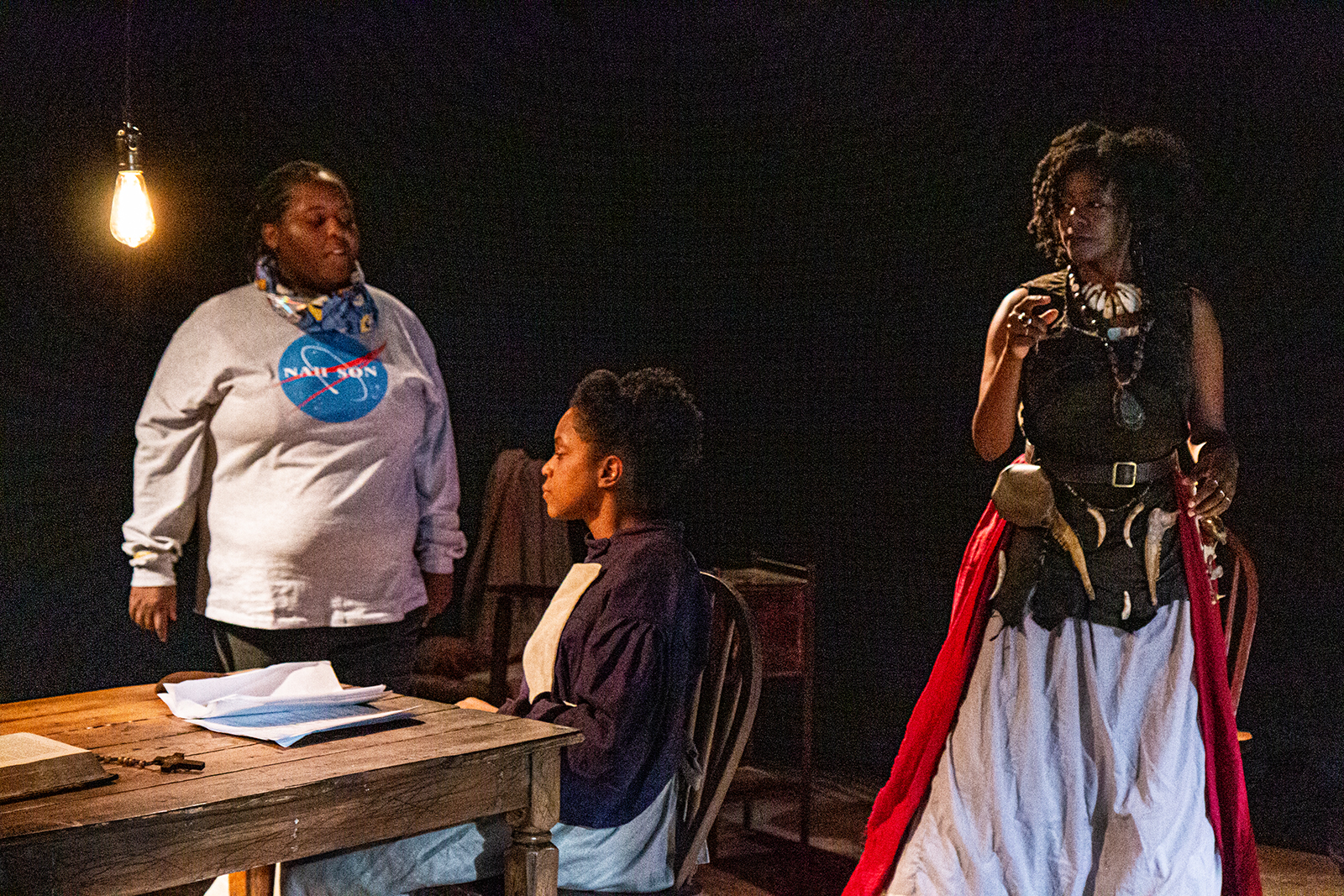 Graduate student Khiam’e Fields’ film “Clara” explores the intersection between intimacy and infertility in traditional marriage dynamics. Maureen Germain and Niki J Crawford star as Mary and Shaman, respectively, who grapple with the infertility that drives a wedge between Mary and her husband. (Keaton Larson/Daily Bruin)

Written and directed by Fields, “Clara” focuses on intimacy’s place in a relationship, highlighting the ensuing turmoil when a 19th century African American couple deals with infertility. Fields said the couple’s journey with conception magnifies the tension in traditional marriage dynamics as well as the objectification of black bodies. While the film primarily sees the couple, Mary and Unger, at odds, she said their intimacy scene created a well-rounded depiction of the black bodily experience in the film.

“I’m very cognizant, as a black woman, of the exposure of women’s bodies and the exposure of black bodies in general,” Fields said. “(I’m) not just focusing on (Mary’s) pain, because we see enough of that.”

“Clara” introduces Mary and Unger after they have already suffered numerous miscarriages, ultimately driving a wedge between the couple. Lead actress Maureen Germain said Mary struggles to balance her role as a good, domesticated wife with her want to exercise control over her body. Desperate to carry a child to term, Mary rebels against her husband’s wishes of keeping their infertility private by seeking help from an enigmatic shaman.

Although the film is driven by their marital conflict, Germain said the addition of an intimate scene deepens the story by offering a new perspective into how the couple communicates with each other physically. Mary is Germain’s first role that required nudity, but she said the importance of the scene to her character’s development overshadowed any doubts she had. The scene is key in the film, acting as one of the few moments in which Mary’s movements and actions aren’t dictated by her husband, Germain said.

“The nature of the story calls for those intimate moments because the whole premise is about love,” Germain said. “I had no hesitation, mainly because the message is so powerful.”

To ensure the scene was tastefully done, Fields and cinematographer Gabriela Spampinato, a graduate student, consulted numerous films for inspiration. Different emotions can be conveyed through the angle, focus or movement of a shot, and Fields envisioned a scene that looked realistic and raw. Fields worked alongside an intimacy coordinator to choreograph a relatable, minimally dramatized scene. Spampinato determined the technicalities of lighting and shots to capture a purposeful, grounded intimacy scene by taking cues from the likes of “If Beale Street Could Talk” and “Set It Off.”

Spampinato could reference other films since the mechanics of sex have remained relatively stable across the centuries, but the lighting used to capture these moments has changed dramatically. One of Spampinato’s main difficulties was invoking the look of a pre-electricity, moonlit 19th century night using modern lighting, she said. However, she was able to play with candlelight, shadows and light stretching to make the scene sensible. Through naturalistic lighting and an emotionally relatable portrayal of intimacy, Spampinato said the scene adds a moment of hyperrealism.

The thorough breadth of each character’s personality and their relationship encouraged Germain to reflect on her own ideals of femininity, blackness and marriage, she said. Since Germain hopes for a family one day, she said the role has challenged her to redefine her notion of owning one’s body as a black woman in the 21st century.

Although the film is set 150 years before Germain’s time, Fields said the issues of gender roles and the exploitation of black bodies are still prevalent today. Germain said she finds many similarities between herself and Mary – from her wholesome nature to being soft-spoken – and is inspired by Mary’s want to act and live for herself by going against society’s standards.

“(‘Clara’) is about family; it’s about feminine energy and power and owning your body: all these things that we are still sensitive to talk about but are more aware of in 2020,” Germain said.