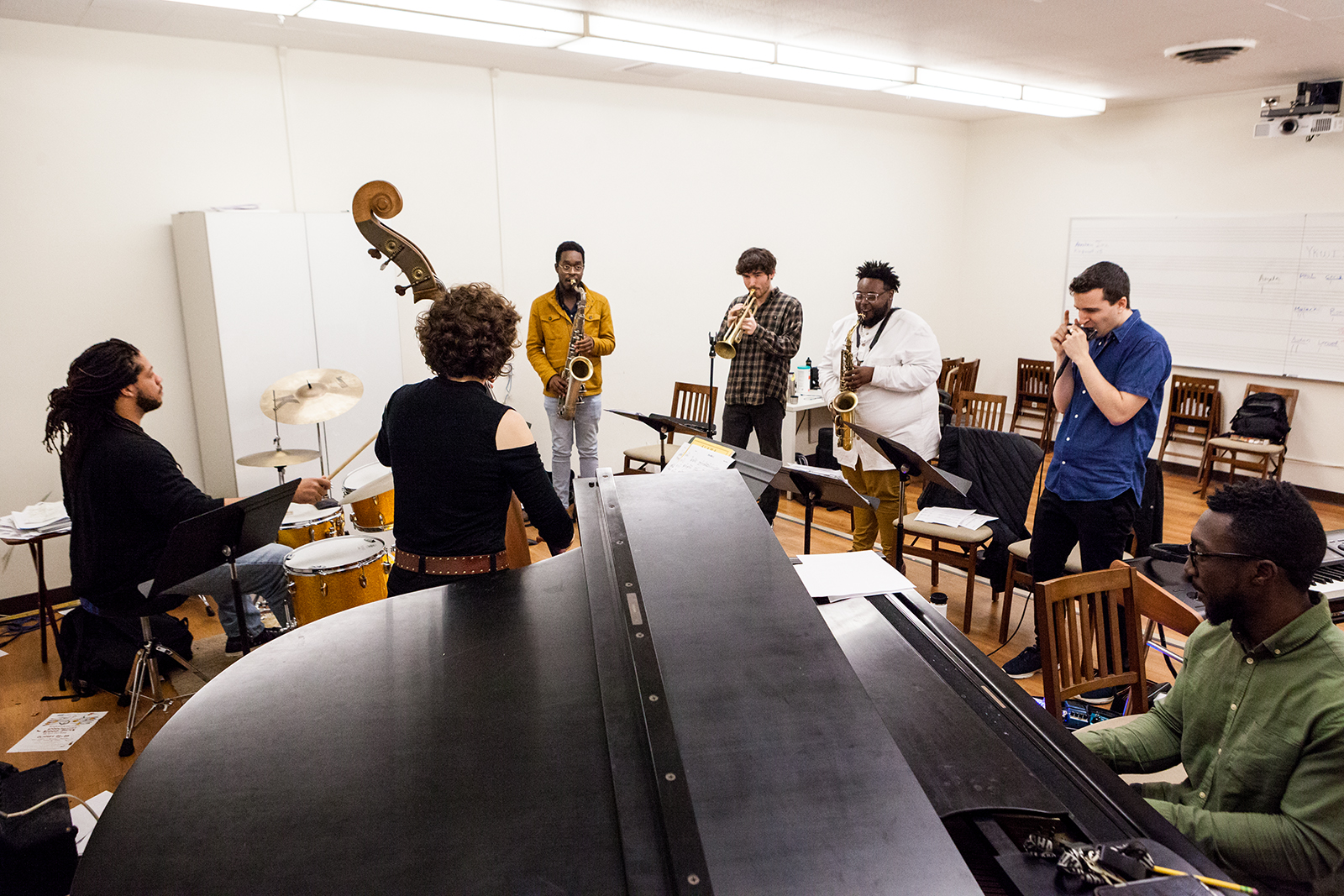 Graduate students Malachi Whitson and Emma Dayhuff will be playing the drums and bass in an upcoming jam session hosted by the The Herbie Hancock Institute of Jazz Performance, respectively. (Mia Kayser/Daily Bruin staff)

The Herbie Hancock Institute of Jazz Performance at UCLA’s upcoming jam session allows audience members to play alongside the musicians.

Students in the performing band will host the event at bluewhale on Tuesday. The first portion of the show features original student works along with jazz compositions by professional artists, said Daniel Seeff, the West Coast director of the Herbie Hancock Institute. Afterward, the band will hold a jam session in which musicians in attendance can take the stage and perform, Seeff said. It’s entertaining for audience members to see musicians who don’t know each other figure out how to perform together and experience the distinctive creations that come out of their collaboration, Seeff said.

“Jazz is still not necessarily mainstream music, so any chance to present it to people and bring them into the world of jazz is a great opportunity,” Seeff said.

While having opportunities to musically improvise, students of the institute also work with professional artists in the jazz field, he said, such as Herbie Hancock himself and Wayne Shorter, a professor at the Herb Alpert School of Music. On top of working in the classroom, Seeff said the program features community outreach elements in which students teach music at local schools and host performances in the city. bluewhale is an ideal venue for young performers, Seeff said, where they are able to develop their artistic talents in a real-world performance setting as they do in the community outreach projects throughout the year.

“(The performance) is a way for (the students) to have a venue to perform and also to interact with local (Los Angeles) musicians,” Seeff said. “It’s a great community-building element of the institute.”

bluewhale tends to draw a young audience, in contrast to the genre’s typically older fan base, said Malachi Whitson, a graduate student and drummer for the band. Whitson said jazz music is a collective and improvisational experience, so it demands a collaborative group of performers. The experience feels like the group of musicians is engaging in a musical conversation while also engaging with the community, he said.

When it comes to improvising, musicians have to find common ground that allows each performer the opportunity to solo with their instrument, said graduate student Emma Dayhuff, who plays bass in the band. Musicians must let go of expectations for the musical outcome of performances, Dayhuff said, so they can be open to changes that may occur during a set. Dayhuff said she hopes audience members are inspired by the collaborative environment of the jam session.

“(Musicians) try to make a group arrangement of it on the spot,” Dayhuff said. “Hopefully it’s fun to play (and) fun to listen to.”

Jam sessions tend to consistently follow a similar musical format, Seeff said. Most performers for the upcoming show at bluewhale have memorized a familiar array of jazz standards – such as songs by jazz musicians or in musicals – which helps musicians recognize the right times to add instruments into songs, he said. The performers can simply call out the name of a tune on stage, Seeff said, and others in the group will recognize it and improvise accordingly.

[Related: 33rd JazzReggae Fest brings community together to celebrate music under the sun]

When musicians have more knowledge of different instruments and harmonies, said graduate student Roni Eytan, they have increased freedom to improvise in a group setting. Eytan, who plays harmonica for the band, said although they rehearse before a show, they never go into a performance knowing exactly what to expect. Some parts of performances are prepared in advance, while jazz also leaves room for the music to be spontaneous, he said.

“No matter how experienced you are, it takes courage to go and play not knowing exactly how it will go or what exactly you’re going to play,” Eytan said. “Sharing that feeling of vulnerability and being in the moment is a real spiritual thing that the audience can feel.”

The jam session also allows students to integrate themselves in the greater LA musical community, Dayhuff said. By also playing with audience members, students of the institute meet like-minded performers and expand their connections within the LA jazz scene, Whitson said.

“We just create a platform with the jam sessions for everyone to network,” Whitson said. “It’s almost like a work convention, but it’s a little bit more low key.”