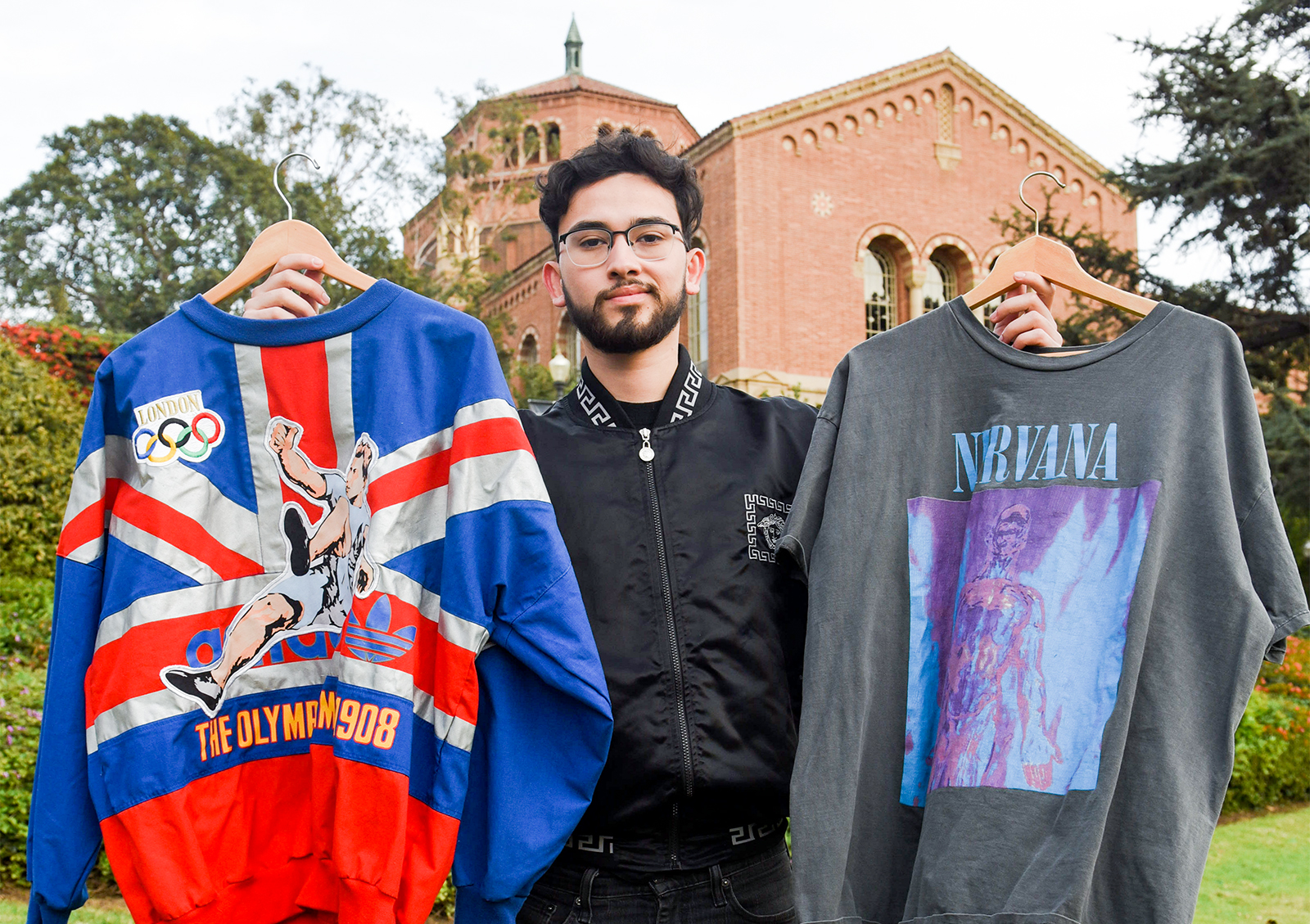 Second-year mathematics and economics student Felipe Valdovinos III co-runs his Instagram-based clothing shop Vintage Inspired with his cousin. Valdovinos posts photos of items he thrifts – ranging from popular brands like Nike Inc. to “hypebeast” brands like Supreme – and customers can direct message him to purchase the clothes. (Alex Driscoll/Daily Bruin)

The second-year mathematics/economics student first discovered thrifting as a middle schooler by exploring the shops in his hometown of Ontario, California. Since then, Valdovinos has transformed his passion into a business called Vintage Inspired, which he has been co-running with his cousin for the past five years on Instagram. Initially, Valdovinos didn’t intend to create a company – but over time, his way of supporting his family evolved into an e-commerce business.

“My parents are both immigrants from Mexico, and they don’t speak English, so job opportunities are kind of difficult for them,” Valdovinos said. “Sophomore year of high school, my mom lost her job, and I was too young to legally get a job. I had the idea (of selling thrifted clothes), but I just didn’t really know how to do it.”

After reading an article about a student who made his own clothes and sold them through Facebook, Valdovinos said he was inspired to emulate this strategy using Instagram. He created an Instagram account and posted a photo of a red Ralph Lauren jacket he had thrifted, using hashtags to gain views. Within five minutes, he said someone had contacted him to purchase it.

“It was only $25, but still, that kind of sparked something within me, like, ‘Oh, I could do something with this,” Valdovinos said. “From then on, I started applying myself to (the business) and learning different marketing techniques for online e-commerce and it just grew from there.”

Five years later, Vintage Inspired has nearly 26,000 Instagram followers and reaches up to a third of a million impressions every week, Valdovinos said. Within this time, he said he has also managed to streamline his business.

Valdovinos previously acquired the clothes by going thrifting himself. Now, he said the connections he has made with time in the industry and through social media exposure allow him to obtain clothes directly from a supplier. Furthermore, Vintage Inspired has solidified its aesthetic by predominantly selling streetwear, though Valdovinos said he has an expansive view of the clothes he puts on the market. The spectrum of styles ranges from popular brands like Nike Inc. and adidas to “hypebeast” brands like A BATHING APE and Supreme.

Though the designer and high-end brands alone attract consumers, the aspect of thrifted clothes, rather than new clothes, also appeals to customers. Second-year psychology student Nicole Anticona said she was drawn to this specific quality of the store because of her interest in sustainable fashion. Since she is working on reducing her fast-fashion consumerism, Anticona said Vintage Inspired has made this goal more attainable.

“When I was home, it was easy to thrift because (stores) were closer and (in) walking distance,” Anticona said. “But being at school, it is kind of a drive to get to any local thrift stores. It’s nice that (Vintage Inspired) does it for me and I just get to look and message if I want it. … It’s made (thrifting) way more accessible.”

Like any business, Vintage Inspired is a two-way street. On his end, Valdovinos said he is focusing on improving his business’s usability. He said it is tedious to interact with customers individually via Instagram Direct messaging to work out the logistics of financial transactions and shipping. Therefore, Valdovinos is currently working on creating a website for his business that increases the efficiency of posting, selling and shipping clothes.

Building the website for Vintage Inspired is a joint effort, and Valdovinos said he is collaborating with his friend, Dominiq Martinez. By studying business websites that he wanted to imitate, like Supreme’s, Valdovinos said he was able to come up with features that would differentiate his store’s website from a typical e-commerce site. In particular, Martinez said functions like drop lists and raffles will distinguish Vintage Inspired from its competitors.

“(Valdovinos) looks at everything from an entrepreneurial standpoint to see how it’s going to work out for the business instead of saying, ‘I’m going to do this because it looks cool,’” Martinez said.

Though Valdovinos looks toward the future of his business, he said he is reflective of how the past five years have altered his perception of what is possible. Vintage Inspired has transformed from a simple means of helping his family to a thriving business, Valdovinos said.

“It’s allowed me to have the freedom to focus on school, focus on the business and really grow something,” Valdovinos said.