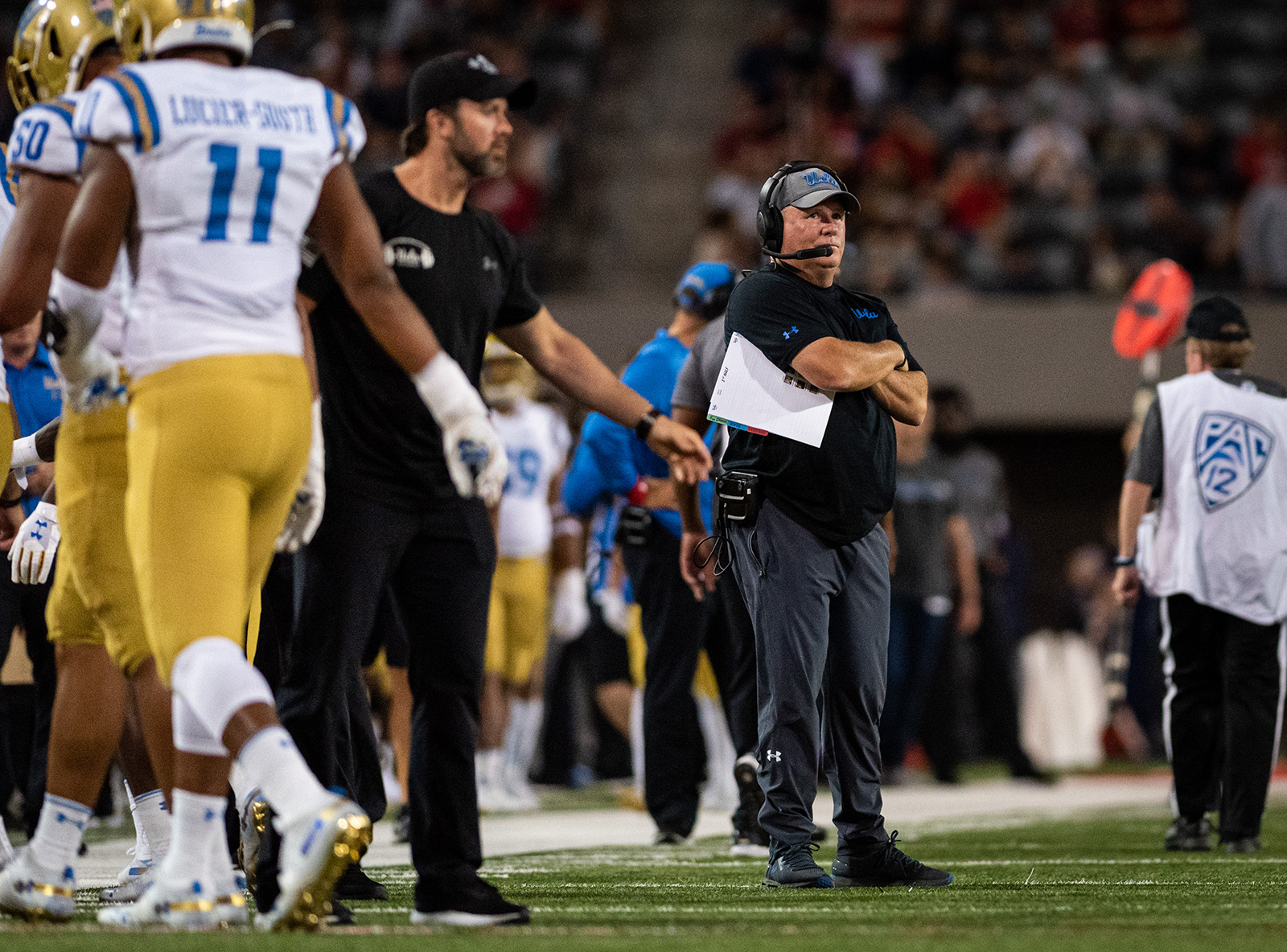 UCLA football coach Chip Kelly has a 7-15 record since coming to Westwood, well below his 46-7 mark across four seasons with Oregon. One of Kelly’s seven wins as a Bruin came against crosstown rival USC on Nov. 17, 2018. (Liz Ketcham/Photo editor)

Make no mistake, the Bruins’ matchup with the Trojans on Saturday is the most important game in Chip Kelly’s UCLA football coaching tenure.

It has nothing to do with Kelly being on the hot seat – because he isn’t – but rather because he has a chance to prove himself in front of not only a fan base starved of success, but also a national audience that has placed him and his career on the back burner.

After starting the season 1-5 for the second straight year, Kelly and the team can still become bowl eligible thanks to a midseason three-game winning streak, but a loss to Utah in its most recent outing has the team with its back against the wall.

UCLA must win each of its final two games to become bowl eligible, and a win against crosstown rival USC on Saturday is the most difficult remaining step, given that the Bruins close out their regular-season schedule with a home game against California – a squad that has lost five of its last six games.

However, Kelly has to lead his team past its archrival before getting a crack at the Golden Bears, something he’s already done, despite only having been with the program for 22 games.

UCLA defeated USC at the Rose Bowl in an instant classic November 2018 on the back of then-redshirt junior running back Joshua Kelley, who rushed for 289 yards and a pair of touchdowns in the victory.

That win gave the team a sense of direction as to where it was headed going into year two with Kelly at the helm and – more importantly – generated some leeway from a UCLA fan base that struggled through an 0-5 start to the season.

That optimism, however, went out the window within the first month of Kelly’s second season, after losses to Cincinnati, San Diego State and then-No. 5 Oklahoma sent fans into a tailspin. Despite being hired fewer than two years prior, Kelly’s tenure with the program was starting to feel as though it had reached a boiling point.

But the Bruins have started to turn things around since, and Kelly has started to earn the trust of those who have been on the fence about him since he arrived in November 2017.

Kelly will tell you every game carries the same weight – and that may be true to him – but there is no doubt he has a golden opportunity this week to change the narrative surrounding the current state of his career.

Taking down USC en route to a bowl game appearance in the same season in which the team recovered from a 1-5 start, overcame injuries at key positions and ended an 11-year losing streak to Stanford would be one of the most memorable accomplishments by a Bruin football coach in recent memory.

By defeating USC and California in the final two weeks, Kelly would also become the first UCLA coach to defeat all three California-based Pac-12 schools in a single season since Bob Toledo in 1998.

Historical records aside, a strong finish to the season could also set Kelly and the program up for a brighter future by drawing in more top recruits to add to a 2020 class that already ranks in the top-30 nationally.

While Kelly’s career since his departure from Oregon has been far from perfect, he has an opportunity in the next two weeks to recapture some of the magic that made him a household coaching name a decade ago. 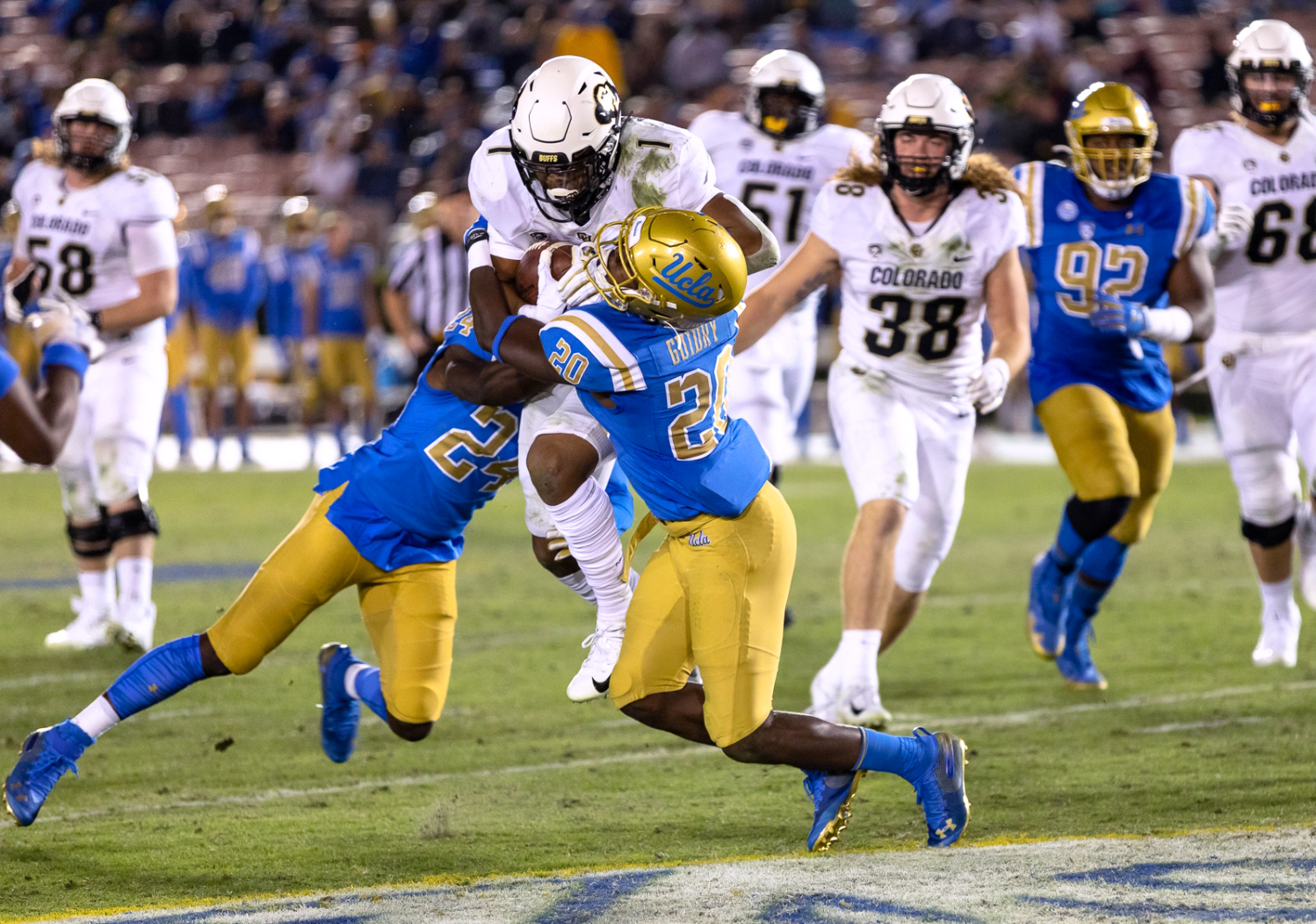