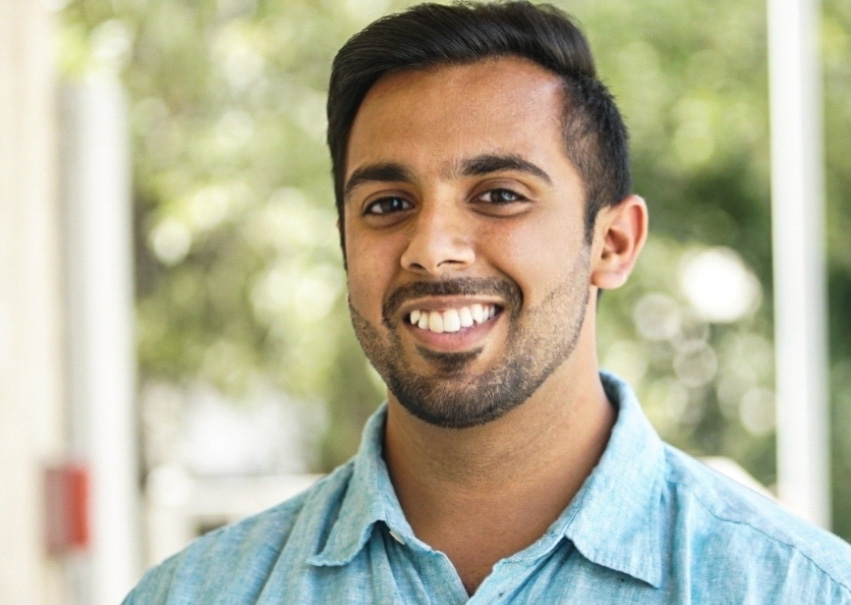 UCLA alumnus Haidar A. Anwar began his college trying his hand out at science and law, but his passions eventually led him to Deluxe Entertainment Services Group. After serving as a project manager for various shows, Anwar said he wants to focus on providing Muslims representation in media. (Courtesy of Saagar Shaikh)

Los Angeles is the go-to spot for fostering creativity and making it big – and it’s also home to dozens of promising Muslim artists who are breaking into the industry and redefining what it means to be Muslim. Follow columnist Umber Bhatti as she covers local creators and discovers how they plan to make their mark in the city.

Acting didn’t pull Haidar A. Anwar into film – bloopers did.

The UCLA alumnus, who worked in postproduction for over three years at Deluxe Entertainment Services Group and now works for the international originals development team at Netflix, said he became intrigued by the medium after having a movie night with family friends. Anwar said they watched “Cheaper by the Dozen 2,” which, while not the best movie, featured behind-the-scenes elements that fascinated him.

“What stood out to me in the movie was toward the end, they played the bloopers,” Anwar said. “I would always look forward to it and be like, ‘Oh my gosh, this is what (the actors) messed up on, this is what they’re having fun with.’”

Anwar’s love for bloopers led him to start a film society at his high school, but the alumnus said he had a variety of other competing interests. Therefore, when it came time to pursue college, Anwar applied to UCLA for biochemistry. However, his personal essays highlighted his experience opening his high school film club and how he helped his friends develop their creative pursuits. Though Anwar didn’t realize at the time, he said this would all lead to his desire to become a producer.

At UCLA, Anwar soon realized biochemistry wasn’t the path for him. So, he switched his major to political science and added a minor in film, television, and digital media studies, deciding he would try his hand at becoming an entertainment lawyer. However, he said his path changed even more when he began devoting most of his time toward UCLA’s Muslim Student Association as external vice president, something Anwar said he appreciated, as, growing up, he didn’t have a strong Islamic community to lean on.

Anwar eventually became president of MSA West – an organization that unites Muslim students across college campuses on the West Coast. This community-building attitude of Anwar doesn’t surprise his friend Sahar Jahani, who has written for the show “Ramy.” Jahani said Anwar’s true talent has always lied in his ability to connect with others.

“By nature, (Anwar) has a creative personality and his best quality is just bringing people together,” Jahani said. “He’s always been a hustler, and he’s one of the few people who’s worked in a corporate setting that dealt with film as well.”

After graduation, Anwar said he realized his heart was in media, and ditched his attempts to study for the LSAT. His passions led him to a job at Deluxe Entertainment as a project manager, working on postproduction for shows like “The Handmaid’s Tale” and “Vikings.” Despite making great industry connections and gaining hands-on experience at the postproduction house, Anwar said his initial plan was only to stay for a year and transition into producing.

But Anwar’s mother was diagnosed with stage 4 breast cancer in 2016, forcing Anwar to prioritize his family over his career. While it was an extremely difficult time for him, Anwar said his mom continued to encourage him to pursue his love for entertainment. The two even talked about starting a YouTube channel, which would feature Anwar’s mom and be marketed toward older South Asian women.

“She was very supportive, and it’s definitely something that keeps me moving because a lot of our conversations became about building a positive image for Muslims (in the media),” Anwar said.

In the aftermath of his mother’s death, Anwar continued working in the industry, even doing contract jobs for Netflix. He said he aims to land a permanent job in the development department of a streaming platform so he can diversify the space in which projects are green-lit.

Moving forward in his career, Anwar said he hopes to be in a position where he can push all Muslim representation in media to pass the Riz Test. Inspired by Muslim and Pakistani actor Riz Ahmed, the test is a variation of the Bechdel Test – which measures representations of women in media – but for Muslim representation. Requirements to pass the Riz Test include, but are not limited to, removing language that equates Muslims with terrorism or references to Islam as archaic.

Personally, Anwar said he is furthering representation by working alongside actor Saagar Shaikh to produce an incubator film festival for the wider Muslim community. Shaikh said Anwar’s desire to constantly improve as a producer allows him to highlight a correct form of Muslim representation in film.

“(Anwar) does have creative ideas, but I would more so consider him a producer-type,” Shaikh said. “He’s a guy that, if he doesn’t know how to make things happen, he’s going to learn how to make it happen.”

Anwar said his desire to learn more about the entertainment world procured him a spot on the board of Colour Entertainment, an organization that connects established and rising professionals in the industry. As Anwar advances in his career, he said he hopes to open doors for other Muslim creatives.

“I feel like a lot of Muslims in the industry have this mentality of being the first ones to make it, … but for me it’s like, ‘Don’t forget the people behind you,’” Anwar said. “Don’t forget your community.”