Theater review: ‘The Thanksgiving Play’ is not worth the pilgrimage, lacks in-depth insight 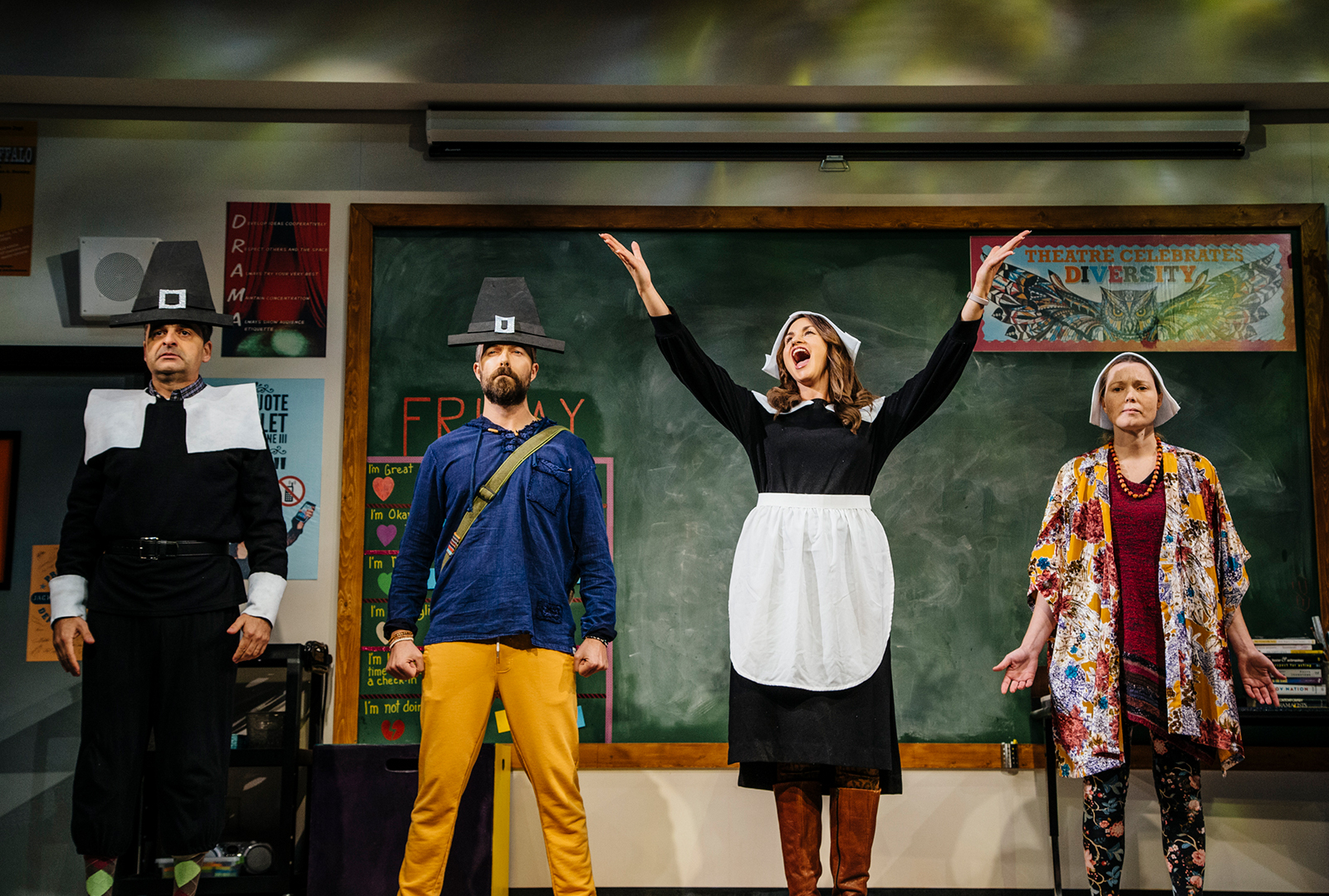 An attempt to create a Thanksgiving pageant without any Native American performers leads to chaos and commotion in “The Thanksgiving Play.”

The 90-minute production features four adult nonindigenous characters attempting to construct a pageant in honor of both the holiday and Native American Heritage Month for an elementary school. Running at the Geffen Playhouse through Dec. 6, the production shows the struggles of telling the factual story of Thanksgiving while being politically correct. As seemingly every idea for the pageant is uncovered as problematic, attempts to bring insightful commentary on the topic are ultimately immature and tedious.

Opening in a classroom featuring a chalkboard and a poster that reads “theatre celebrates diversity,” the performance started off with the cast singing to the tune of “The Twelve Days of Christmas.” The lyrics, however, were changed to words such as “headdress” and “moccasin” to fit a more Thanksgiving-esque theme. The cast attempted to add a playful twist to the song by adding vocal exaggerations to a few of the lyrics, but the antics came off as dull instead of humorous. The introduction ended up failing to provide an informative background of what the play would discuss, opening the production in a lackluster manner.

The confusion persisted even after the opening scene when audiences were introduced to Logan (Samantha Sloyan) and Jaxton (Noah Bean), two of the four main characters. As they discussed the pageant, Logan suddenly criticized Jaxton for eating cheese in front of her, causing Jaxton to desperately defend himself as a “vegan ally.” Setting up the repeated theme of allyship, the discussion was amusing, providing a smooth transition into the remainder of the performance.

In the aftermath of the quirky vegan cheese episode, Logan went to seek advice from Alicia (Alexandra Henrikson) on how to celebrate Thanksgiving, but the scene quickly took a turn for the worse. Selected to be part of the play because of Logan’s understanding that Alicia is of Native American descent, the production falls into the trap of tokenism. Alicia is essentially asked to be representative of an entire racial group, only for Alicia to reveal herself to be of European descent. This news then causes Logan to panic, as her pageant will now feature an all-white cast with no Native Americans.

Disorder erupts among the cast as every idea for the pageant portrays Native Americans intensively and offensively. The production primarily follows the adults positing new ideas, which make less sense and become more unrealistic with the concept of having mannequin head props resembling Native Americans count as representation. While Logan and Jaxton discuss what it means to be an ally to Native Americans, the conversation feels mundane and basic, lacking the substance needed to actually address an extremely pervasive issue.

The play loses its appeal as time goes on, as ideas for the pageant grow less feasible over time, despite being occasionally humorous. The performers’ on-going attempts to create a politically correct pageant quickly become repetitive and tiring especially since many of their ideas feel unorganized and not concise.

As characters of the play debate whether they should cover Thanksgiving matter-of-factly or sugar-coat the topic, brief moments of reflectivity are stirred up. The ultimately lackluster production did provide a few moments of thought-provoking and comedic discussion. The production seems to have strong intentions to shine a spotlight on Native American involvement during the holiday, but some moments were just simply done in poor taste.

In their desperation to explore the necessity of political correctness through humor, “The Thanksgiving Play” became largely reminiscent of stuffing – prepared with good intentions but unnecessary to the overall feast.