Speakers at summit optimistic about clean-energy adoption in US 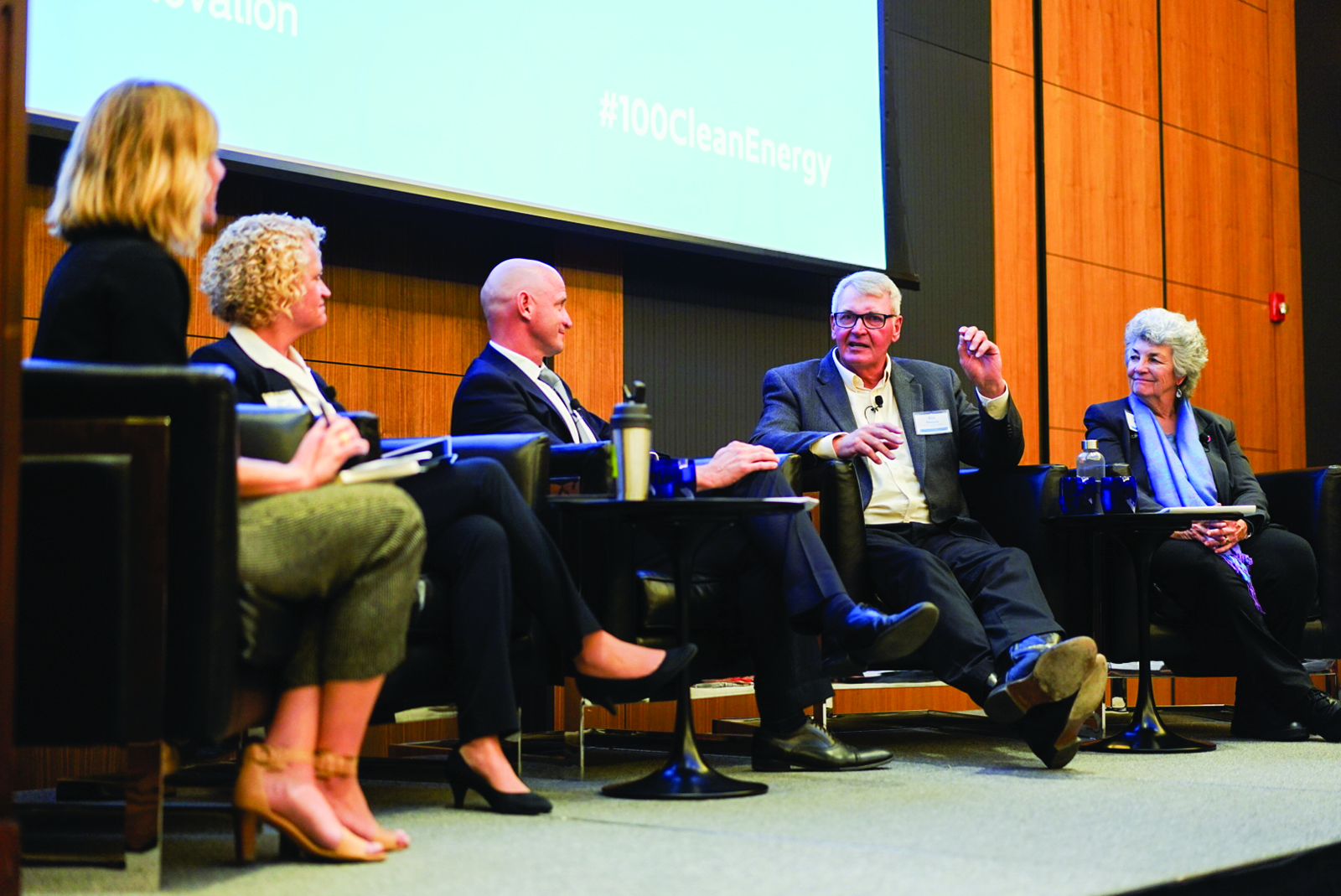 The UCLA Luskin Center for Innovation hosted the first-ever Summit on State and Local Progress Toward 100% Clean Energy on Wednesday. The panel discussed efforts by state and local legislatures to phase out fossil fuels in favor of clean energy. (Xuxin Zhang/Daily Bruin)

By Eve Boyd and Payton Kammerer

States and cities have made significant progress toward using 100% clean energy in recent years, faculty and experts said at a campus event Wednesday.

The first-ever Summit on State and Local Progress Toward 100% Clean Energy, hosted by the UCLA Luskin Center for Innovation, featured a panel of state and local officials from across the country, as well as national environmental policy leaders.

The panelists discussed the efforts of state and local legislatures to change their energy policies in order to phase out fossil fuels in favor of clean energy such as solar, wind and hydroelectric power.

Jodie Van Horn, director of the Sierra Club’s Ready for 100 Campaign, a national movement of CEOs and local leaders to commit to 100% clean energy by 2050, said the principal theme of the summit was its timeliness.

She said the summit provided inspiration in light of President Donald Trump’s official notice of withdrawal from the Paris climate agreement Monday. The 2016 Paris Agreement is an international agreement between 195 countries that aims to mitigate global warming.

J.R. DeShazo, director of the Luskin Center for Innovation, said more than 200 cities and counties across the United States have committed to or already realized 100% clean energy targets, with the highest number being in California.

In 2018, California pledged to reach carbon neutrality by 2045. Carla Peterman, senior vice president of regulatory affairs for Southern California Edison, said there is a sense of urgency surrounding the clean energy movement in light of recent California wildfires.

“The now constant threat of wildfires, droughts, severe storms and habitat loss, driven by climate change, signal a crisis that we can no longer ignore,” Peterman said. “Simply stated, we cannot wait, and we should not wait when there are viable solutions to pursue now.”

Kevin de León, policymaker-in-residence and senior analyst with the UCLA Luskin School of Public Affairs and the Luskin Center for Information, said clean energy is particularly crucial for a city like Los Angele, with its long-standing status as the most ozone-polluted city in the U.S.

The most common cause of absences in California public schools is asthma, the former California state senator said.

Despite these long-standing pollution issues, California’s Global Warming Solutions Act of 2006 has been largely successful, said Mary Nichols, the chair of the California Air Resources Board. The act outlined a goal of reducing the state’s carbon emissions to 1990 levels by 2020, a goal that was achieved four years ahead of schedule.

“That’s great news, but I think even better is the fact that while we were doing it, we were also growing our economy faster than the national average,” Nichols said.

She said these recent success stories in clean energy legislation were part of the reason the conference was hosted in California.

“We think that gives us some standing to talk to others about what we did and how we did it, to be an encouragement for others, and also a model,” Nichols said.

Kelly Trumbull, project manager at the Luskin Center for Innovation and lead author of two clean energy reports central to the summit, said there has been a recent uptick in state and local commitments to clean energy.

“The number of commitments (to 100% clean energy) that have occurred in 2018, and in 2019 especially, have been rapidly increasing,” Trumbull said. “Also, in this last year, we’ve seen 64 communities in California become 100% clean.”

Most of the progress in clean energy has been made within the last 18 to 24 months, DeShazo said.

“Action to address every major environmental challenge has started first at the local level,” DeShazo said. “We’re going to look back on this moment as a moment when political action at the state level began to push the entire nation towards this goal.”

Other states, such as New Mexico, have also made efforts to move away from the use of fossil fuels. In order to further support its move toward clean energy, New Mexico created a $20 million job-retraining program to help transition employees in the fossil fuel industry to other professions, said Patricia Roybal Caballero, member of the New Mexico House of Representatives.

Brandon Hurlbut, former chief of staff to the secretary of the United States Department of Energy, said the more expansive resources of the national government are also essential for handling the challenge that transitioning to clean energy poses.

“Because (what) I experienced in (Washington), D.C., taught me … what they respond to is public sentiment (and) pressure,” Hurlbut said. “That is going to have to be a sustained movement to get people … to change their point of view on this.”

Trumbull said the achievements of cities and counties around the U.S. keep her optimistic about the future of clean energy.

“I think the main message is that 100% clean energy is achievable and I think now is really the opportune time to start pushing for more clean energy,” Trumbull said.