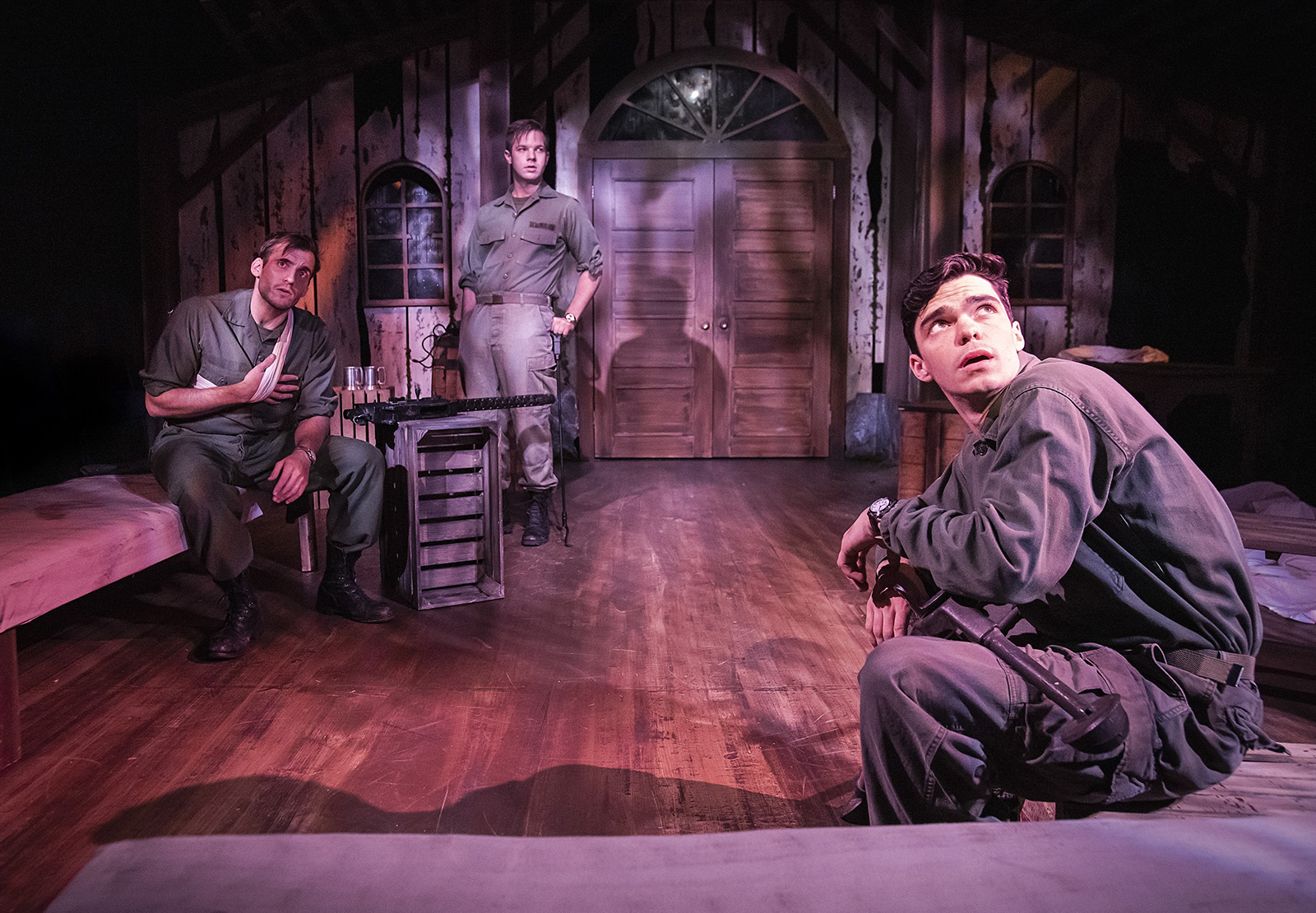 Alumnus Spencer Martin (right) stars alongside Travis Doucette (left) and Bryan Porter (middle) in “Defenders,” a play following Americans who go to defend Iceland in the midst of World War II. Martin said the chaotic natural elements in the play mirror the chaos that the Americans brought to the politically neutral island nation.
(Courtesy of Darrett Sanders)

A trip to Iceland left Cailin Harrison with a crashed car and inspiration for a new play.

The upcoming production “Defenders,” premiering Saturday at The Broadwater Black Box, takes place during World War II and follows three American GIs who become shipwrecked on a remote island in Iceland, which they have been sent to defend. The American soldiers, one of whom is portrayed by alumnus Spencer Martin, ends up receiving aid from a local preacher and his daughter. Harrison said the play examines the relationship between political and natural environments while touching on the desire for cultural and environmental preservation in the isolated setting of Iceland.

“(Iceland was) nonviolent, but they weren’t really happy with the fact that (Americans) said we had to protect them from the Germans,” Harrison said. “Iceland felt the only thing they needed to continually honor and protect themselves from was their own environment with the earthquakes and volcanoes going off and these violent storms.”

Harrrison personally connected with the recent history of Iceland’s involvement, or lack thereof, in World War II after a car accident left her stranded in an Icelandic village. As she waited in a museum for assistance, she said she learned the little-known history from a local curator whom she would have otherwise driven right past.

Learning of Iceland’s neutrality and the Allied powers’ unsolicited defense prompted Harrison to write “Defenders,” she said. With this history in mind, “Defenders” presents a fictitious depiction of the well-intentioned invasion and its unforeseen consequences, said Reena Dutt, the director of the play. The title itself reveals the irony of American soldiers going to a foreign country in the name of defending and upholding that country’s values when the country doesn’t even feel it needs it, said Martin, who plays Pvt. Fred LeFleur.

Chaotic natural elements take on a life of their own, further emphasizing the Americans’ unwelcome presence, Martin said. The very storm that shipwrecks the soldiers to begin with, Dutt said, is an example of nature reacting to their arrival in an explosive way.

“If we send our soldiers out to help a culture of people when they’re in harm’s way, there’s a social responsibility of how our invaders affect that society and their social culture and the fabric of their history,” Dutt said. “I think, in war, regardless of who’s saving who, someone is going to be influenced.”

The inevitable cultural influence is seen through the claustrophobic environment, Harrison said. “Defenders” primarily takes place in a small church where close quarters prevent the characters from evading their circumstances. Such a confined setting forces them to confront one another, further stressing their tensions, she said.

In the beginning of the play, the storm that hits Iceland prompts reflection on our current climate, Dutt said. Pressing issues such as global warming and the fires affecting Southern California all force humans to examine their effects on the environment, acting as a parallel of the play’s portrayal of nature as a supernatural force protecting the locals of Iceland from American soldiers, she said.

“The mythology of the island questions what is going to protect the Earth from humans, so the Earth and the island and nature and the environment are all reacting to (the soldiers’) presence,” Dutt said.

Through environmental resistance to invasion, Harrison said she hopes her message can resonate with contemporary climate activism without being too on the nose. Harrison said she believes “Defenders” will move the audience to ponder the larger, disastrous effect humans have on the environment today despite its historical time period.

“Every action we take affects people in ways that we can predict and ways that we can’t,” Dutt said. “So what I’m hoping for is an increase in empathy and to know that what affects one of us one way may not affect everybody in our environment and our surroundings the same way.”