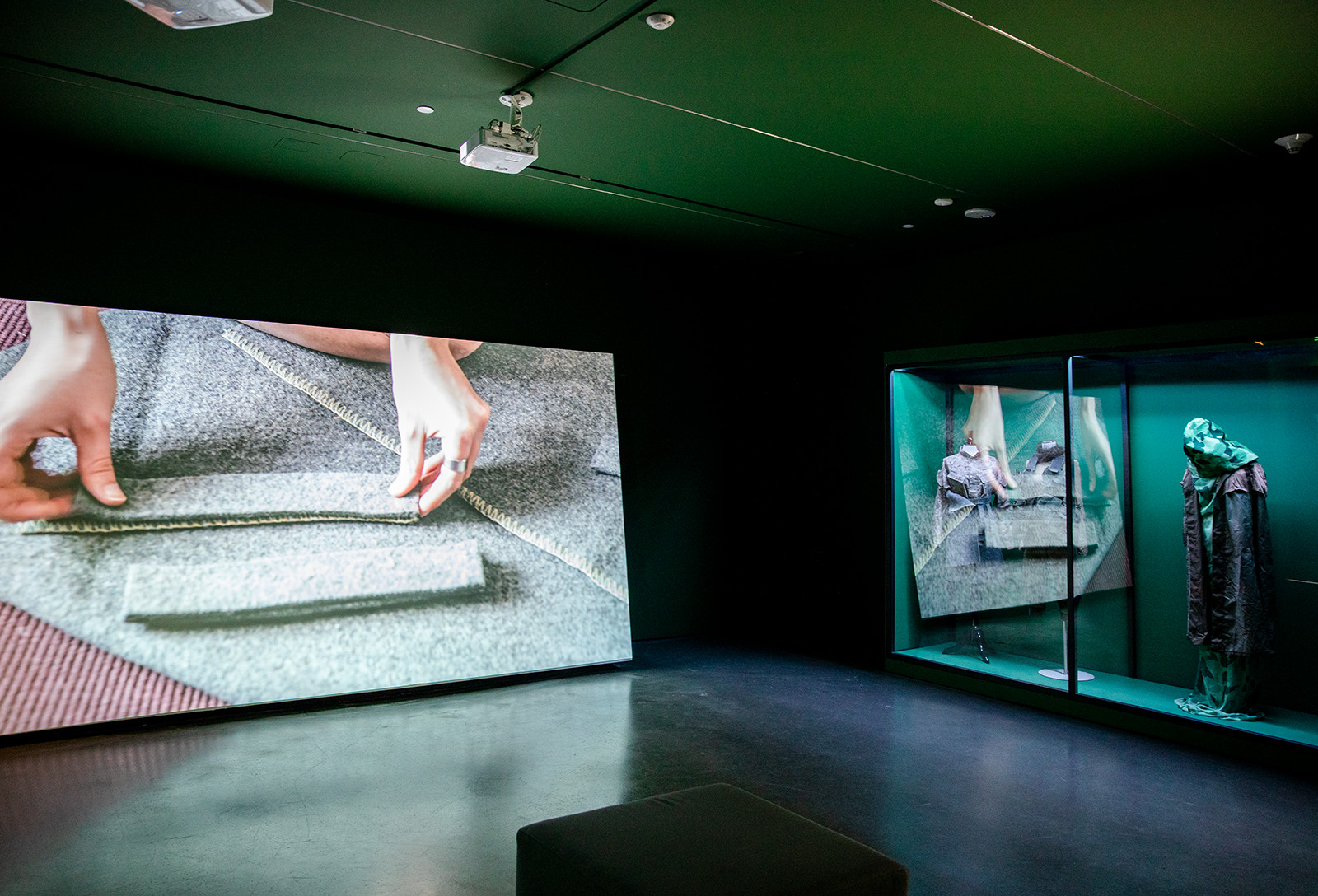 Artist Jasmina Metwaly has her installation “Anbar” on display at the Hammer Museum until January 19. Her work consists of three 15-minute documentary clips alongside costumes to tell a story about Egyptian military uniforms. (Tanmay Shankar/Assistant Photo editor)

Costumes and film are combining to tell the story behind Egyptian military uniforms.

Jasmina Metwaly, an artist and activist, will have her installation “Anbar” on display at the Hammer Museum until Jan. 19. The project mainly takes the form of video media, which provides a documentary-style insight into the presence of Egyptian military uniforms in everyday life in Egypt. Following three characters – a uniform tailor, a soldier and an activist filmmaker – Metwaly said her piece immerses audiences and offers varied insights into the presence of the uniforms and in the lives of each of the characters.

“In the video I asked (the tailor) what is the difference between making military uniforms for Egyptian military, and similar uniforms for TV and cinema,” she said. “It’s kind of interesting to see how these two worlds are also closely connected.”

The history and ubiquity of the military uniforms are well established in places such as Egypt, which Metwaly said are highly militarized. The 10-hour bus ride across Egypt to Sinai requires passage through many military checkpoints that she said can often feel threatening.

The video aspects represent these feelings by following the conversation between a tailor and a soldier who comes in for a uniform fitting. In a portion of the three-part installment, the soldier describes his military experience, but his young and shy demeanor humanizes him, breaking down the paranoia that can surround the uniforms in the public eye, she said. These emotions are palpable in this portion of the work, she said, since audiences can watch the scene unfold.

But “Anbar” does not just include video. Metwaly said she also worked with a costume designer for the exhibit to create three uniforms with patterns inspired by the real military’s uniforms. Hammer Museum curator Aram Moshayedi said Metwaly’s work introduces new narrative strategies that consider the interplay between the importance of film and documentation. This aspect is relevant especially when being shown in Los Angeles, as it is a space connected to film through its history rooted in Hollywood, he said.

“(Metwaly), as a young artist, is at a very kind of crucial point in her career,” Moshayedi said. “It was very interesting to think about how her work would resonate in a context such as Los Angeles that has such a rich history with moving image work.”

Viewers also experience “Anbar” in a more intimate setting as they have to put on headphones to experience the sound of each video. Metwaly said her inspiration to showcase “Anbar” in a video format came from protests surrounding the revolution occurring in Egypt in 2011. It was one of the most televised events at the time, she said, and video continues to be a very flexible form of documentation as an art form, which is why she chose to use it in “Anbar.”

“Video medium felt the most relevant at the time; it was the medium that everyone used, protesters and nonprotesters, … journalists,” Metwaly said.

Since the video installments are split into three separate portions, Hammer Museum curatorial assistant Ikechukwu Onyewuenyi said each one has a different tone, yet still cohesively works to tell Metwaly’s story. One video follows traditional documentary style with little speaking, another feels akin to theater and the last is similar to a diary installation, he said. Metwaly’s experience in filming the revolution in Egypt, however, lends itself to artistic documentation through “Anbar”‘s varying forms, Onyewuenyi said.

“(Metwaly) is coming out of this activist framework while also being a filmmaker,” he said. “It was a natural progression that video would be the language in which she entered for this project.”

When she thinks about displaying her work at the Hammer Museum, Metwaly said it is often difficult to translate the concept of Egypt’s military uniforms to an American audience. The distance can lead to people feeling disconnected from the concepts her installation covers. However, the consistent presence of the military body is something Metwaly sees as being familiar to places all over the world, thus making her work relevant in parts of the world other than just Egypt.

“I’m hoping some of these challenges of watching and experiencing and listening to these stories that, although it can be challenging, people can relate somehow,” she said.