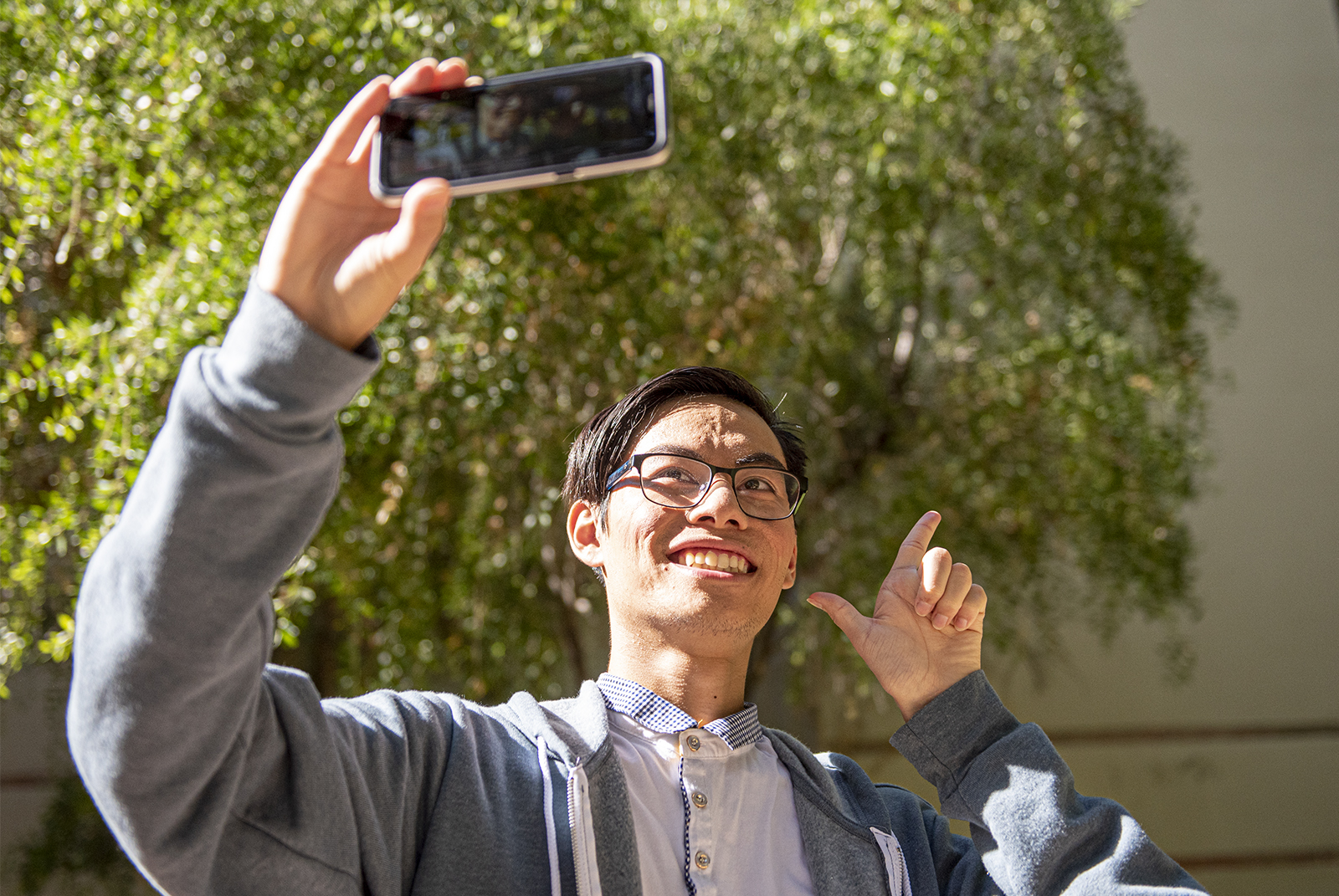 Fourth-year astrophysics student Braden Lem is balancing schoolwork with his personal vlogging channel, “braden IRL,” on YouTube. His main priority for the channel is to document his favorite moments in college, from dance groups to staying up late with friends. (Kanishka Mehra/Assistant Photo editor)

Braden Lem is living in the moment, even as he documents each one on camera.

Also known by his online persona, “braden IRL,” the fourth-year astrophysics student balances a YouTube channel alongside his schoolwork as he covers a broad range of topics revolving around his life as a UCLA student.

From staying up late with friends to documenting his time with a dance group, Lem said he uses his platform to capture memories he might otherwise forget. After his sophomore year, Lem said his content called for a change – switching from a daily vlogging style to filming only his most memorable moments. This change helped him balance his hobby with his demanding school schedule.

“I did end up making a new channel which still retained the current name that I have for it at the end of sophomore year, and I moved away from doing daily vlogging to more just making vlogs of big events,” he said. “That way, I would be taking up a lot less of my time in regard to editing videos.”

Before he began vlogging his college experience, Lem said he was inspired by fellow YouTuber Cindy Thai and her channel “infinitelyvloggin.” His high school friends had been trying to convince him to take on filming as they neared graduation, he said. But it wasn’t until he saw Thai’s videos in which she vlogged her life at UCLA that he decided he would pursue a similar path. “braden IRL” was thus born the summer going into Lem’s freshman year of college.

However, as Lem began getting more comfortable both in front of and behind the camera, his own style became more individualized. Comedic editing draws watchers in because it makes the videos relatable to watchers, despite the content revolving purely around his own life, he said. In one of his videos, “VIEW – We Are gRooTz,” Lem said he focused on filming his Foundations Choreography dance group, gRooTz, to document memories with his friends – he asked each member what the group meant to them so they could reflect back on the answers in the future. His genuine love for documenting memories drives Lem to pick up his camera when the time calls for it, he said.

“Right now, when I usually edit my videos, I usually try to aim for something more lighthearted, something that people can enjoy,” he said. “I always try to incorporate little sound effects or funny meme-like edits.”

The comedic style of Lem’s editing makes his videos synonymous with who he is in real life, as his channel name implies, said Tyler Saunders, a fourth-year geography and environmental science student. Small details, like quirky captions edited into the frame during funny moments, make Lem’s videos personalized rather than just a series of disjointed clips, Saunders said. As “braden IRL” has grown, he said Lem’s editing has allowed him to add personal style and humor to his uploads that project his own voice into each video.

“(Lem) will put a little comment on the side, and I think that really resonates with him and what he would do in real life,” Saunders said. “So I think it’s cool to see that translated to the videos.”

Establishing one’s personal brand as a content creator on YouTube while juggling school can prove to be difficult, said Wayne Cheng, a fourth-year film student at San Francisco State University. Cheng said he met Lem through a collegiate organization called Circle K International and saw him filming at its various events. A videographer himself, Cheng said he was familiar with the struggle of creating quality content while still keeping up with the duties of being a student.

Sometimes, Cheng would grab Lem’s phone and help film clips for his vlogs or watch him edit, and he said he appreciates Lem’s tendencies to prioritize storytelling when he films. The effort Lem puts into editing helps make each upload feel reliable and consistent regardless of the different subject matters they address, Cheng said.

“(Lem) has his very specific intro with the same music and everything, and he always sticks to the same color palette,” he said. “He even has a tagline that he uses at the beginning of every video.”

Moving forward with his channel, Lem said he wants to work on diversifying his content by straying away from UCLA-related topics every once in a while – evolving to include different topics such as album reviews or cooking. At the end of the day, Lem said his main priority remains documenting his favorite moments from college so they can act like a memory vault for himself, his friends and his family.

“There’s so much to balance and there’s always some bliss in being able to step away from all the academics and being able to look at the things that bring us joy in life,” Lem said. “It’s just getting out there in the world.”