The Quad: Don’t break your budget – battle for a bargain and buy the best boba for your buck 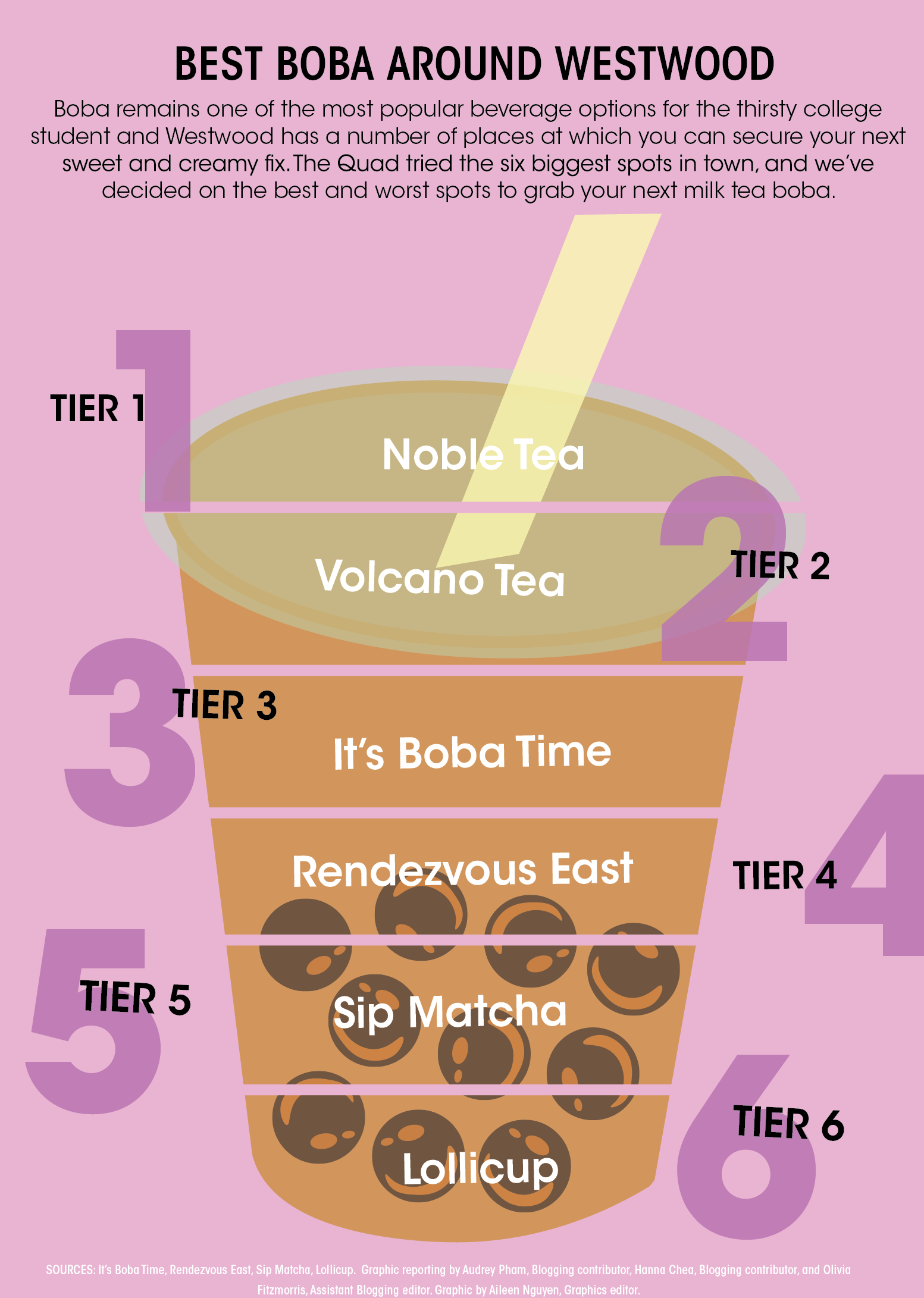 By Hanna Chea and Audrey Pham

“Want to go get some boba later?”

It’s a common question to ask, and the answer almost always seems to be “yes” – at least within the hip LA culture.

What started out as a simple sweet tea served with tapioca pearls in Taiwan quickly evolved into an LA craze with the advent of boba-tea-specific shops in the San Gabriel Valley, an Asian food enclave in Los Angeles County.

New vendors and flavors of that silky milk tea and those chewy tapioca pearls boba are popping up each day, making boba the “it” drink among Bruins. The question is, where should students be going for their boba fix?

To help answer this question, The Quad went around UCLA and the surrounding LA area and put the most popular boba drink at each location to the test. No sweetness or ice levels were adjusted: We ordered the drinks as they were.

The contestants? Rendezvous East, Lollicup Fresh, It’s Boba Time, Sip Matcha, Volcano Tea House and Noble Tea. The grading scale? The taste of the milk tea itself and, of course, the quality of the tapioca pearls.

Lollicup Fresh has been around the United States since 2000, which makes it one of the older boba establishments. It’s in almost every food court – including Ackerman Union at UCLA – so most boba lovers have tried it at least once.

For what you get, which isn’t all that much, you pay quite a bit. It’s $5 for a 16-ounce cup of its popular Thai Tea, placing Lollicup at the more expensive end of the spectrum.

Does it live up to its price tag? The unfortunate answer is no, not really.

While the drink came with a lot of tapioca pearls – nearly half of the 16-ounce cup was filled with them – that’s where the good news ends.

The Thai Tea was overly sweet and didn’t even have the faintest taste of black tea. Though it didn’t taste watered down, it did taste like pure liquid sugar.

The tapioca pearls were big and plenty, but slightly overcooked, making it a softer chew than usual. This is not necessarily a terrible texture, but definitely a detour from the typical tapioca pearl consistency.

Though convenient for students on campus in need of a boba fix, the main takeaway from our sample was to accept Lollicup Fresh as an option only when there’s nothing better. It’s a far cry from our first choice, but not completely inedible.

Sip Matcha is a unique boba stop in itself, given its specialty in matcha drinks. While this pricey boba shop is well-known among Westwood competitors, the drinks themselves fall short to the brand name.

Its strawberry matcha milk tea stands as one of its best sellers, so we decided to give it a try. The boba’s matcha-green to strawberry-red gradient makes it picture perfect for your Instagram story, but don’t forget to give it a good mix before tasting in order to fuse the strawberry and matcha portion of the drink.

Truthfully, it was quite disappointing. The strawberry portion was all right, with a bit of tartness to it and a jamlike texture. However, the drink falls short when it comes to the actual matcha milk tea. While the taste of matcha is vaguely present, the milk tea seems absent from the drink. It’s more of a strawberry jam drink with water and matcha powder.

We give the drink a below average score, but maybe some brownie points for its picture-worthy presentation.

Ah, Rendezvous. You’re a first-year at UCLA, you live on the Hill, and you have a meal plan at your disposal. What’s the harm in swiping for some Bruin-based boba?

For one swipe, you can get two 16-ounce boba drinks. This is definitely a more cost-effective option for Bruins with meal plans, and, compared to other places around UCLA, you get more bang for your buck.

Beyond the bargain and convenience, Rendezvous’ boba isn’t a disappointment at all for what it is. We ordered the standard milk tea with boba, one of their more popular options, and were pleasantly surprised.

The milk tea itself was just the right amount of sweetness, but had surprisingly heavy notes of dairy. This taste overpowered the milk tea because, though aptly named, it was way more “milk” than “tea.” The tapioca pearls were the drink’s better half – hitting the sweet spot between chewy and soft.

Whether you’re on your way to class or simply on a stroll around the Hill, Rendezvous’ boba is not terrible option at all. In fact, for just one swipe, the quality and quantity shouldn’t really be argued with.

Arguably one of the more popular boba pit stops in Westwood, It’s Boba Time is located in the heart of the Village right across from the movie theaters.

We tried the Thai Tea, one of It’s Boba Time’s top-10 most popular drinks, and a favorite flavor among boba-lovers in general. The drink holds a satisfying tapioca-pearls-to-milk-tea ratio. The pearls themselves were a bit on the softer side and lacked the fresh boba factor many look for.

The milk tea itself is on the sweeter side, so those looking for a more herbal or water-based flavor might want to give the other drinks on the menu a chance. While the milk and Thai tea fusion is balanced, the beverage does become a bit watered down as you finish up your last sips.

Overall, It’s Boba Time sports a large selection of drinks, so it is sure to satisfy the flavor palette of any boba-craver. Plus, it’s a fair price.

While the next two boba stops are not within walking distance from UCLA’s campus, we’re pretty sure they’re worth the trip.

Volcano Tea House is nested in a smaller plaza on Sawtelle – about a 10-minute drive from campus. We ordered the Jasmine Milk Tea from their top-five favorites menu and were not disappointed.

Though a little less creamy than that of competitors, the milk tea had a well-balanced combination of herbal and milky flavors.

As for the tapioca pearls, a good portion is added to the drink – not too little and not too much. The boba also tastes fresh, adding a satisfyingly chewy texture to balance out the rest of the refreshing drink.

We give the drink a worthy score of 7.75/10; but beware: Volcano Tea House takes cash or Venmo transactions only.

Rising to the number one spot on The Quad’s list of boba bops is none other than Noble Tea, located in Sawtelle.

Noble Tea not only has an extensive menu, but it also uses a modern ordering system with tablets that allow customers to explore the menu, adjust their boba preferences and make a credit card payment without the assistance of a cashier.

We ordered the Classic Milk Tea, one of Noble Tea’s best-sellers, to see if it lives up to its popularity.

The milk tea is the perfect measure of creamy milk, but not overly saturated with sweetness and sugar. The boba itself is smaller than what’s offered at a usual boba shop, but it’s nonetheless satisfying with a chewy texture. As for the size of the boba itself, it is certainly on the bigger side; so remember to come to Noble Tea with a stomach hungry for boba because their sizes are large only.

Overall, Noble Tea rises above the rest as our No. 1 pick. The milk tea is a satisfying choice for any boba lover, and Noble Tea does not fall short in terms of its size, tapioca pearl texture or the taste of the tea itself.