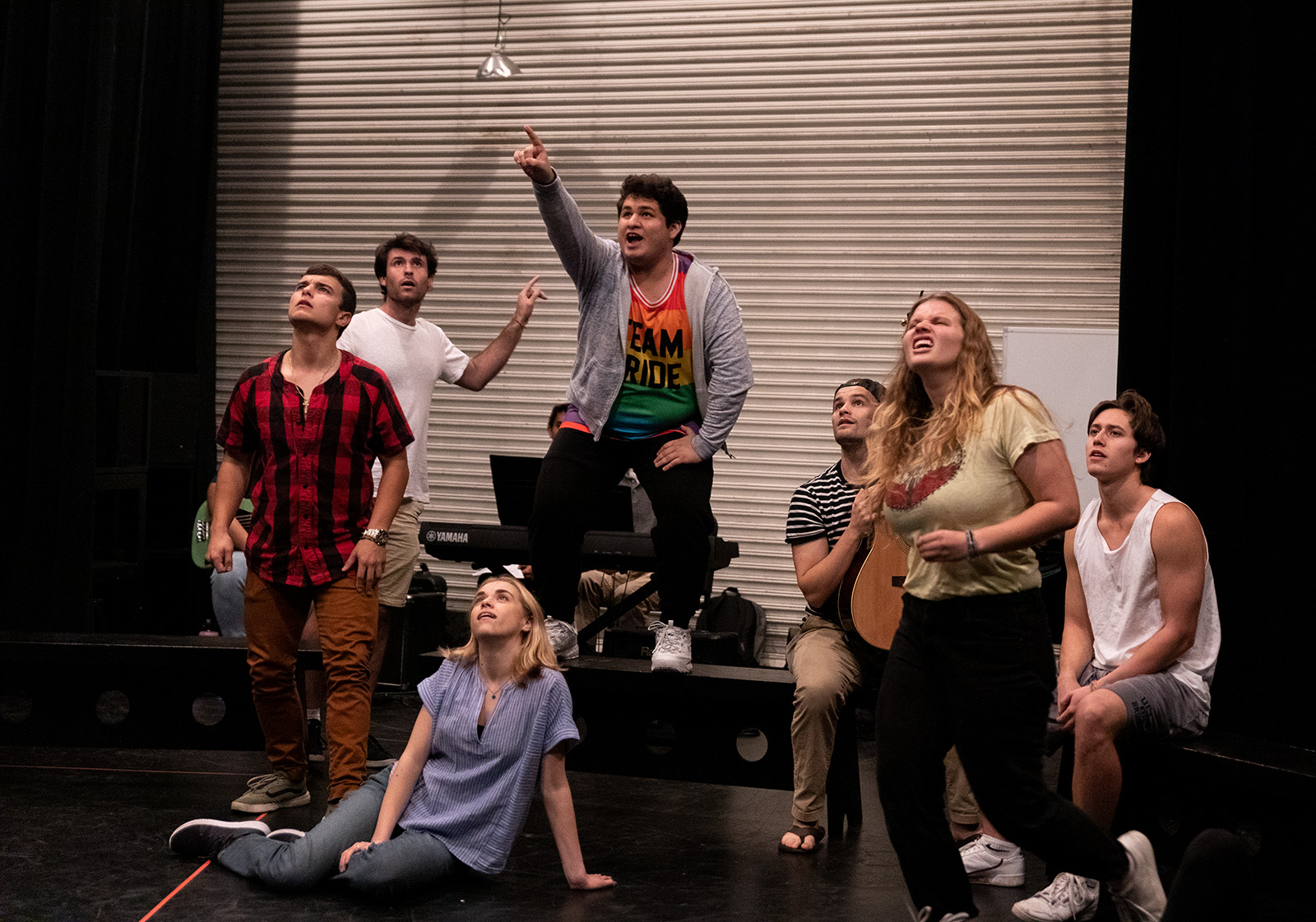 A group of students brought their production of “Camp Song” from a classroom floor to Macgowan Hall. The musical, which will run through Nov. 2, follows a group of friends who travel back to their childhood summer camp to spread the ashes of a friend who recently died of cancer. (Ashley Kenney/Daily Bruin)

What started as a group of theater students sitting on a classroom floor will now take the stage as a fully fledged musical.

“Camp Song” – an original work created by nine graduating theater students, premieres Friday in Macgowan Hall and runs until Sunday. The students came together to write, produce and stage the musical as their senior capstone project, exploring themes of grief and the question of what home is as friends reunite at summer camp. Fourth-year theater student Toni France, who is a producer and cast member, said working on the full-length play was a culmination of their experiences together at UCLA.

Months of planning resulted in a play that follows a group of young people who have all come back to their childhood summer camp to spread the ashes of one of their friends who has recently died from cancer. France said the play analyzes the process of growing up and how spaces that once felt like home may shift following a tragedy.

“The show is told in the present and with flashbacks and explores themes of how you deal with loss and grief and how you grow up,” France said.

She said each character confronts how the idea of home might change in the face of grief, and that this process of change is different for everybody. France’s own character, Sasha, was not one of the original campers, so when she visits the camp, she experiences it as a place where the people she loves feel at home and creates a definition of home based on people rather than a physical place.

But defining home also means acknowledging how home is a place that evolves and changes, said Danielle Koenig, a fourth-year theater student who is the book writer for the production. She said the play seeks to understand what it means to return to a place that once felt like home and how to redefine a relationship with a place after changes have occurred. While this can be a difficult process, in the case of “Camp Song,” it acts as a form of healing for the friends.

The major change that the group has to confront in redefining home is the death of their friend. France said loss plays a crucial role in the production, as the characters confront the absence of their friend who was part of their original definition of home. As the campers gather together and remember their time at the camp, they go through the different highs and lows that accompany coping with loss and grief, said fourth-year theater student Irvin Mason Jr.

“You get a glimpse into what life was like when the friend was alive and they were going to that camp and then see how much their lives have changed since his death,” the director said.

The plot is highly character-driven and explores each character through flashbacks to their experiences as children at the camp. France said it demonstrates how they are currently dealing with the loss of their friend, she added. Because they wanted to home in on the individuals within the circle of friends, she said they decided to use an ensemble cast, allowing for multiple perspectives, plotlines and themes.

“Each character has such a distinct storyline, there really isn’t a single focus, it’s just about the community of these students,” France said.

In order to do justice to this community, Koenig said they decided to directly involve the cast members in the development of the characters. In the early stages of writing the play, France said Koenig asked each of the actors to come up with a character they wanted to play and whom they felt like they could work with, adding more substance to the performance.

France said this ability for actors to create a role they felt comfortable with added another layer to the collaborative process. She said they began by discussing themes and the storyline, had a draft by the end of the school year and continued to collaborate over the summer. Mason said they have been rehearsing since the beginning of fall quarter and that this past week has been their tech week, during which they have rehearsed every day before running through the entire show.

In addition to the technical components of the play, the actors and production crew wanted to make the musical as relatable as possible to audiences. Mason said this component of the play originated from the fact that the play was written by students, for students, in an effort to create a real, down-to-earth story the audience can relate to.

“Suddenly the world of these characters really came to life; they weren’t just like people in mourning, they were like real people with joy and problems,” Koenig said.