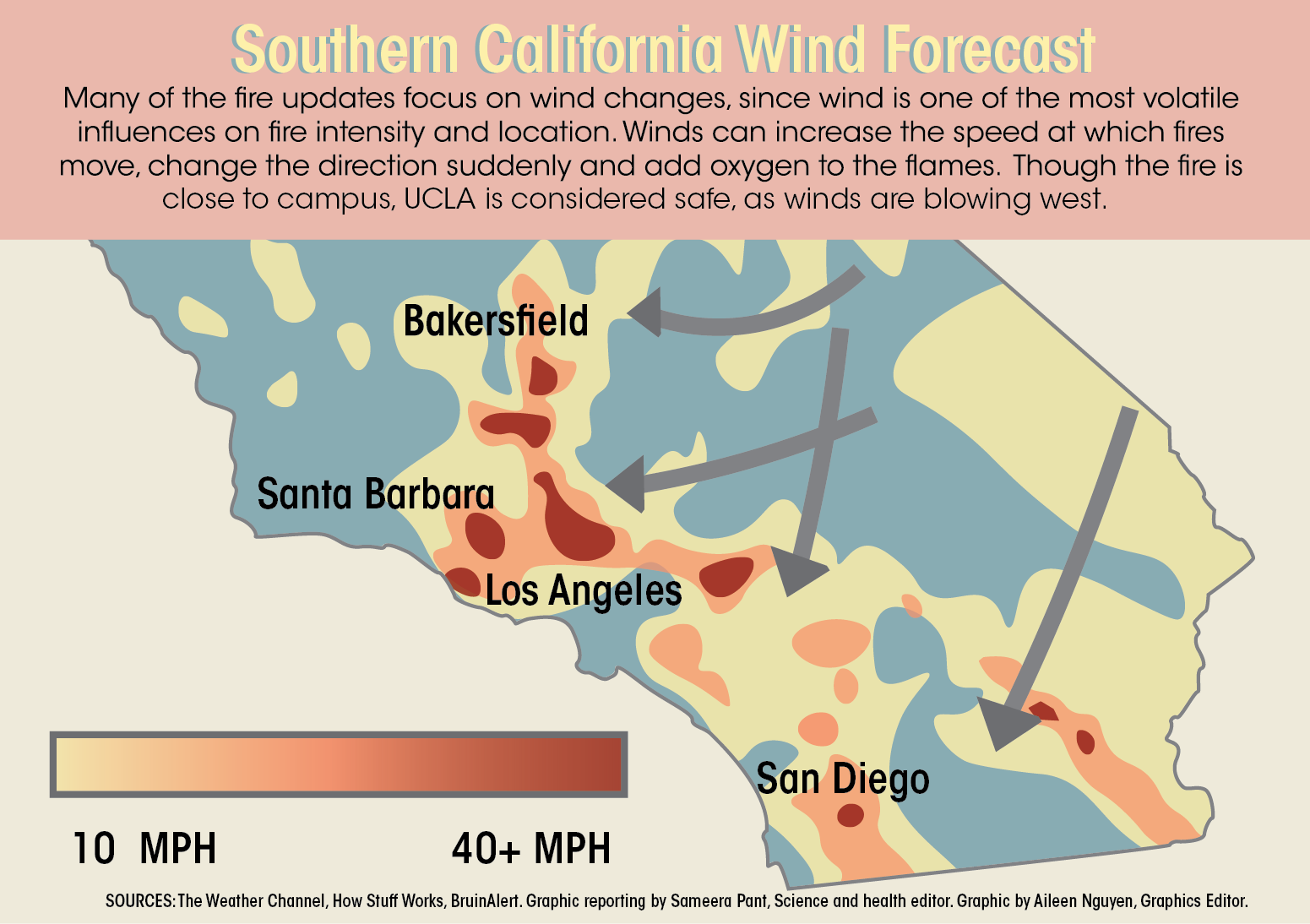 The Getty fire ignited near the Getty Center around 1:30 a.m. Monday. As of Tuesday afternoon, it had expanded to an area of 656 acres and was 15% contained. UCLA canceled classes Monday in response to shutdowns of the 405 Freeway, but campus reopened in time for classes Tuesday.

The NWS expects northeastern winds between 50 to 70 mph, with isolated gusts reaching 80 mph.

“This all adds up to an extreme fire weather threat, meaning that conditions are as dangerous for fire growth and behavior as we have seen in recent memory,” according to an NWS advisory.

Dense, cold air from the Rocky Mountains travels toward the lower elevations in the west, including LA. As it flows toward the coast and descends in elevation, the wind is funneled through narrow canyon passes and accelerates, creating high wind speeds, Fisher said.

Strong winds and single-digit humidity can enhance the risk of fires, he said.

“Any spark (or) fire embers can be carried quite a distance in a strong wind,” he said. “So (for) any hotspots that aren’t under control, wind can exacerbate the problem.”

LA Mayor Eric Garcetti said at a press briefing that despite increases in containment, officials are still concerned about the strong winds.

“We have the most significant wind event in Los Angeles of the year that will be starting this evening,” Garcetti said.

Los Angeles Fire Department Chief Ralph Terrazas added at the briefing that winds are predicted to peak at around 3 a.m. on Wednesday.

“It does take one ember, just one ember, downwind to start another brush fire,” Terrazas said.

Alex Hall, a professor of atmospheric and oceanic sciences at UCLA, said the fires are currently being driven by strong, dry winds coming from the interior west of North America. The direction of the winds is important for how the fires evolve, he said.

“When (the winds) pass over the very dry vegetation that has accumulated over the course of the dry season in California, that creates conditions for fire,” Hall said. “So if there’s an ignition event that coincides with these very dry winds, that can produce a big, big fire.”

Hall added since the winds are blowing west, the fire is unlikely to affect campus beyond changes in air quality or commutes.

Pablo Saide, an assistant professor of atmospheric and oceanic sciences, said in his research he has found that the smoke from the fires can have strong health impacts.

“How the winds change, it also is going to change how the smoke is going to be dispersed, and how that can affect the health of the population around here,” said Saide, who is also part of the Institute of the Environment and Sustainability at UCLA.

Saide compared the movement of the winds and smoke in the Getty fire to those of the Saddleridge fire, a fire that threatened the San Fernando Valley mid-October.

“(Monday), around noon, we had a change in the winds and then that’s (why) we got a little bit of that smoke,” Saide said. “In this Saddleridge fire … the winds changed and then we spent a whole weekend with that bad air quality.”

Over the past few decades, there has been a dramatic increase in the intensity and the size of wildfires in California, Hall said. This has been linked to climate change, he added.

“Certainly over the past few years to decades, there’s been a dramatic uptick in the size and intensity of fire – driven by climate change,” Hall said.

However, Hall said it is unclear whether the current fires are driven by unusually warm temperatures.

He added that the recurrent fire is a natural part of California’s ecology.

“Not every fire, even if it’s dramatic is necessarily an apocalyptic harbinger of the future,” he said. “It’s actually part of our landscape and we have to figure out how to live with it.”

The hills in the area around the fire are covered in chaparral – a category of shrubs and grasses native to California – which are adapted to fire, said Daniele Bianchi, an assistant professor of atmospheric and oceanic sciences. Some plants in the area have seeds that can only germinate after a fire, he said.

“We shouldn’t think of the fire … as a necessarily negative thing for the ecosystem,” he said.

However, he said with humans, the landscape, ecosystem and frequency and location of fires have changed. Roads and homes, for example, encroach on initially wild land, which leads to more frequent episodes of ignition, Bianchi said.

“Instead of having large fires every few years or maybe a few decades, we have much more frequent fires that start in many different places and burn through the land,” he said.

The area burned by fires in the United States has increased over the last 20 to 30 years and this area might keep increasing, he said.

“I would say by midcentury, so 2050, we could expect the doubling of the area of fires because of climate change,” Bianchi said.

He added, in the next 30 years or so, the fires might also shift seasons and become more frequent in the summer months.

“Today we tend to have them in the fall because of the Santa Ana winds, but with the warming that we are expecting … we expect them maybe to become even more frequent in the summertime,” Bianchi said.