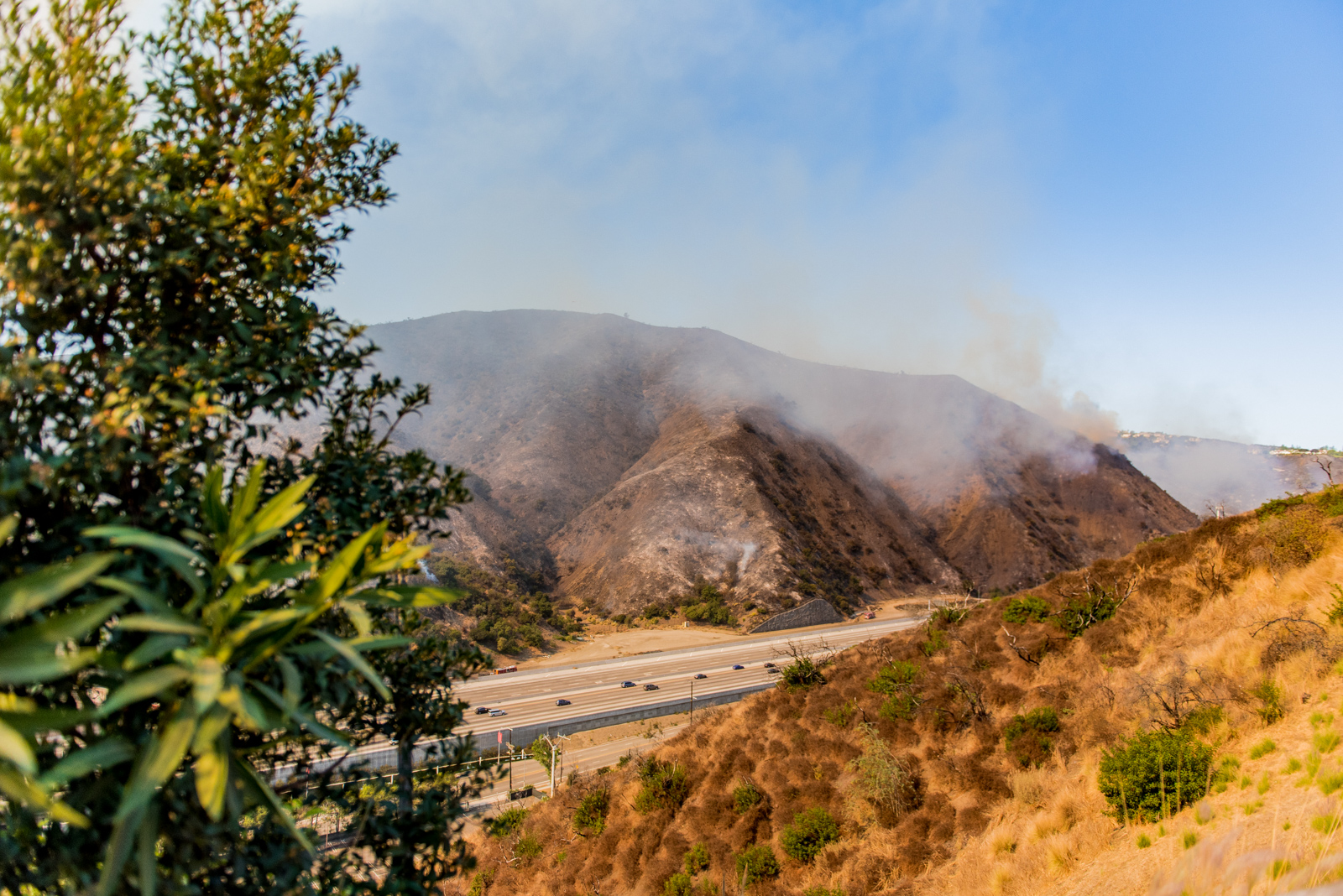 The Getty fire prompted emergency officials to close portions of the 405 Freeway on Monday afternoon, hindering students and other commuters from coming to campus. (Kanishka Mehra/Assistant Photo editor)

Raven Bedewyi woke up to four calls from her mother telling her there was a fire 2 miles away.

The second-year human biology and society student didn’t know how to react.

“I just don’t really know what you’re supposed to do (during) fires,” she said. “I don’t know if we should be evacuating or if I should be planning to evacuate.”

UCLA canceled all classes around 9:25 a.m. Monday due to the Getty fire, which broke out around 1:30 a.m. less than 2 miles from campus. The fire has consumed over 600 acres, destroyed eight structures and damaged six. The fire does not pose a threat to campus, according to the latest BruinAlert.

“When we think about how timely the response (from UCLA was), it wasn’t timely at all,” Riley said.

Riley and other student leaders helped draft a letter to the Academic Senate urging UCLA to cancel classes until the fire is successfully contained, asking professors to consider postponing exams and demanding that UCLA improves its transparent communication regarding evacuation procedures.

The letter has been signed by over 90 student leaders and campus representatives.

“I think the goal is to show not only the Academic Senate, but (also the) UCLA administration that students are seriously concerned about their health and seriously concerned that the university doesn’t seem to be doing enough in times like these,” Riley said.

Riley also said she thinks the updates from UCLA did not touch on evacuation procedures or mandates, and only vaguely addressed health and air quality concerns.

“So there were a lot of issues with the notification, in addition to how late it was,” Riley said.

The first Los Angeles Fire Department alert was at 2:50 a.m., and the first BruinAlert came out at 4:36 a.m., reassuring students there was no immediate threat to campus at that time.

Bedewyi, who planned to go to her 11 a.m. lecture before receiving the BruinAlert canceling classes, said she thought UCLA’s updates were fair, and alerted students who didn’t live on or near campus.

“I think it was good that they canceled classes because I commuted over the summer, so I know what that’s like, and it must be really hard for commuters to come,” Bedewyi said.

However, it might have been better for UCLA to warn students earlier, Bedewyi said.

“My brother commuted to school and he would leave at 4 a.m. for class if he had an 8 a.m.,” Bedewyi said. “If people were coming for an 8 a.m. and they were driving, I think that’s really scary and (UCLA) probably should have notified people sooner.”

Spencer Netherda heard about the fire as soon as he woke up in his dorm and checked his phone around 9 a.m.

“My friends (were) all sending snaps of the actual fire that they could see from the room at like 3 (a.m.),” Netherda, a third-year American literature and culture student, said. “Everybody was pretty wilding out about it.”

Netherda said he then saw the alert from UCLA saying the air quality was good and that the fire was blowing westward instead of toward campus.

“And then 30 minutes later, I got the other text that classes were canceled, which I was stoked about,” Netherda added.

Daniel Gomez, a regular commuter student to UCLA, stayed at home because he was not sure whether class was going to be canceled.

Gomez, who uses the Sunset Boulevard exit off the 405 Freeway to get to school, said he saw reports that the California Highway Patrol closed the exit and the freeway early in the morning. He said he thinks that in comparison, the notification that classes were canceled came in relatively late.

“They should have done it sooner, as soon as the freeways were starting to close,” said the second-year molecular, cell and developmental biology student.

Helen Izaguirre, a third-year political science student who also commutes to campus, woke up to the alert about the fire around 7 a.m. Monday morning. She said she began to wonder how she would get to school through the fires.

She added she was concerned about other students who might also be affected. However, she said she liked how fast UCLA acted to keep students up to date.

“It was really nice to just be well-informed right when I woke up,” Izaguirre said. “So I think that that was a really great thing that UCLA was doing.”

Other students were on campus, preparing to attend lectures or take midterms when they received the notification that classes had been canceled.

Cherry Huang, a third-year cognitive science student, was supposed to take a midterm Monday morning. She said she was upset when, after attending office hours in preparation, she learned it would be postponed. Even the professor was unprepared for it, Huang added.

“I thought it wasn’t a good way to handle it, because it was really late notice,” she said.

Netherda, who is from Northern California, another region currently experiencing large fires, said he was more used to fires than some of his local friends were.

“This is California, it’s not like we’re ever going to escape fires,” Netherda said. “It happens so much that I feel like that when there is a high-risk situation, you can’t just drop everything and quit … because next week, we may have another fire and (another) the week after, and if you just cancel classes every time there’s a risk, you’re never going to have classes.”

At the same time, Netherda said he thinks canceling classes Monday was a good idea given the fire’s proximity.

“It’s going to be a nightmare to evacuate this place if that has to happen,” he said. “I think that they’re playing it safe. … When fires come, you just kind of have to roll with it and just be ready at the drop of a hat. But I also think you can’t put your life on hold waiting for the fire maybe to come.”

If an evacuation were to take place, Netherda said he would grab a ride with some friends from Orange County. Heading back to his hometown of Santa Rosa, California, however, would be out of the question.

“My family, actually yesterday (in) Santa Rosa, got placed on mandatory evacuation,” Netherda said. “I feel like a volleyball at this point.”

Netherda’s family rebuilt their house over the past year after losing it to a fire two years ago, he added.

“When we found out that our house was still standing this morning, we just immediately started making jokes,” Netherda said. “And then I said, hey, my classes are canceled too. … They’re obviously worried about me and (tell me to) stay safe, but it’s really a sick joke at this point that there’s this many fires going on.”

Bedewyi, who is from Orange County, drove back to campus from home Sunday night.

“My mom’s terrified,” Bedewyi said. “She thought about driving up and just picking me up, just in case, but I told them I was fine. I think they’re like used to fires because it’s California, but also the fact that it’s so close. It’s obviously scary for everyone.”