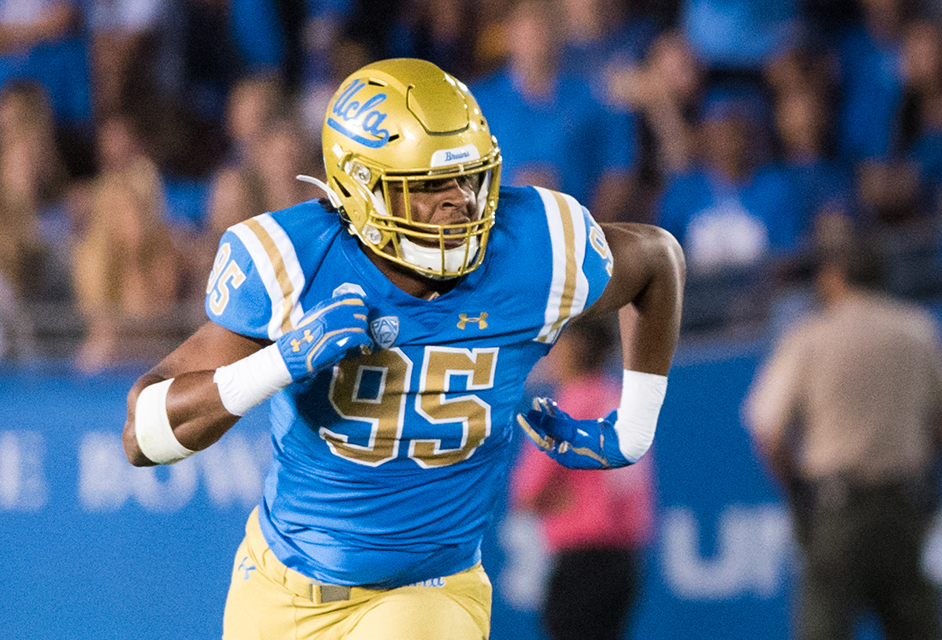 UCLA football graduate linebacker Jason Harris made one of UCLA’s seven sacks in its victory over Stanford last week. UCLA will return to the Rose Bowl on Saturday to face No. 24 Arizona State. (Axel Lopez/Daily Bruin senior staff)

The Bruins are returning home for a Pac-12 South showdown.

While UCLA has as many losses as Arizona State has wins, as the Bruins went 0-3 in nonconference play and the Sun Devils went 3-0, the two teams have the same Pac-12 record.

Three of the Sun Devils’ four conference game so far have been determined by a touchdown or less, including a 38-34 victory over Washington State – a team UCLA managed to beat earlier this season by a four-point margin as well.

Arizona State was shut down last weekend by Utah 21-3, recording only 136 total offensive yards and a season-low 25 passing yards. But coach Chip Kelly said the Utah game isn’t indicative of Arizona State’s true potential, viewing it as more of an anomaly than a new norm.

“They’re really talented, and I think sometimes when you look at statistics, they can get skewed,” Kelly said. “They played in really bad weather last week against Utah and against a very, very good Utah team, so I think the numbers they put up in that game skewed that. And I would imagine if you looked at those numbers before the Utah game, they would have been a lot higher.”

The Sun Devils are led by quarterback Jayden Daniels, who is averaging 233.6 yards per game in the air, good for sixth in the conference. Daniels ranks one spot behind sophomore quarterback Dorian Thompson-Robinson in passing yards per game, but the Sun Devil signal-caller has rushed for 65 more yards on the ground this season.

Running back Eno Benjamin leads the Sun Devils’ running game, sitting fourth in the conference with 90.4 rushing yards per game.

“(Daniels) is definitely elusive and is a big run threat for us … and (Benjamin) is a great back as well,” said graduate linebacker Jason Harris. “They have great talent all over the place so it’s definitely a challenge.”

Thompson-Robinson said in addition to Arizona State’s offensive capabilities, UCLA will also have to watch out for the Sun Devils’ defense, developed by coach Herm Edwards, who spent time coaching the New York Jets and Kansas City Chiefs in the NFL.

“Knowing (Edwards’) background in the NFL, they run a very pro-style type defense,” Thompson-Robinson said. “So we’re going to expect that type of defense, and just … prepare for everything, and kind of expect the worst and hope for the best.”

This will be Thompson-Robinson’s first time facing the Sun Devils – as he was injured for last year’s matchup – with former quarterback Wilton Speight taking the helm in the eventual 31-28 loss instead.

UCLA trailed for the entirety of the second half in the 2018 matchup. However, the Bruins’ defense got a stop down three points with under two minutes to play, and started their drive on their own 20-yard line.

The drive failed, as a series of miscues – including a sack, fumble and two false starts – which pushed UCLA back and allowed the clock to run out on the Bruins, sent them backward 1 yard in the drive.

This year, UCLA owns home field advantage and boasts a defense coming off a seven-sack performance against Stanford.